Don't Be a Chicken, Grab Your Spoon and Shoulder Your Burdens

Bless me father for I have sinned, it has been... *checks last post* 15 days since my last blog post. I am just starting to get back into a routine, at the start of my second full week without any kids at home, which will hopefully include blogging regularly again, although I don't really know what that means, precisely.

Both kids seem to be doing well. I got them both instant pots in the summer when Canadian Tire had a fantastic deal on the one we have here, so I could show them the basics before they left. They've both managed to break theirs in long, long before I got over my fear of mine (I bought it in a really good Black Friday sale and then was too scared to use it for a year and a half). I FaceTimed with Eve while she made some curry chicken in hers, and Angus uses his daily and texted that it's the greatest invention of all time.

I drove Eve to Hamilton because Matt was in Vegas (poor guy, his job is so rough, wtf). On the way there we stopped at a Burger King and both went to the bathroom before getting food. The music being piped in was an appallingly lugubrious Rod Stewart song about a girl leaving home and presumably getting hooked on drugs or something and her mother crying herself to sleep every night. We both left our respective washrooms making weird faces about it. We lined up to order, and after a minute or two Eve put her head on my shoulder and I put my arms around her. At the exact same second we both started fake-emotionally singing the song and then burst out laughing and had our usual discussion of sharing a brain and I worried briefly about how it was going to go for me when I had to go home with only my half. 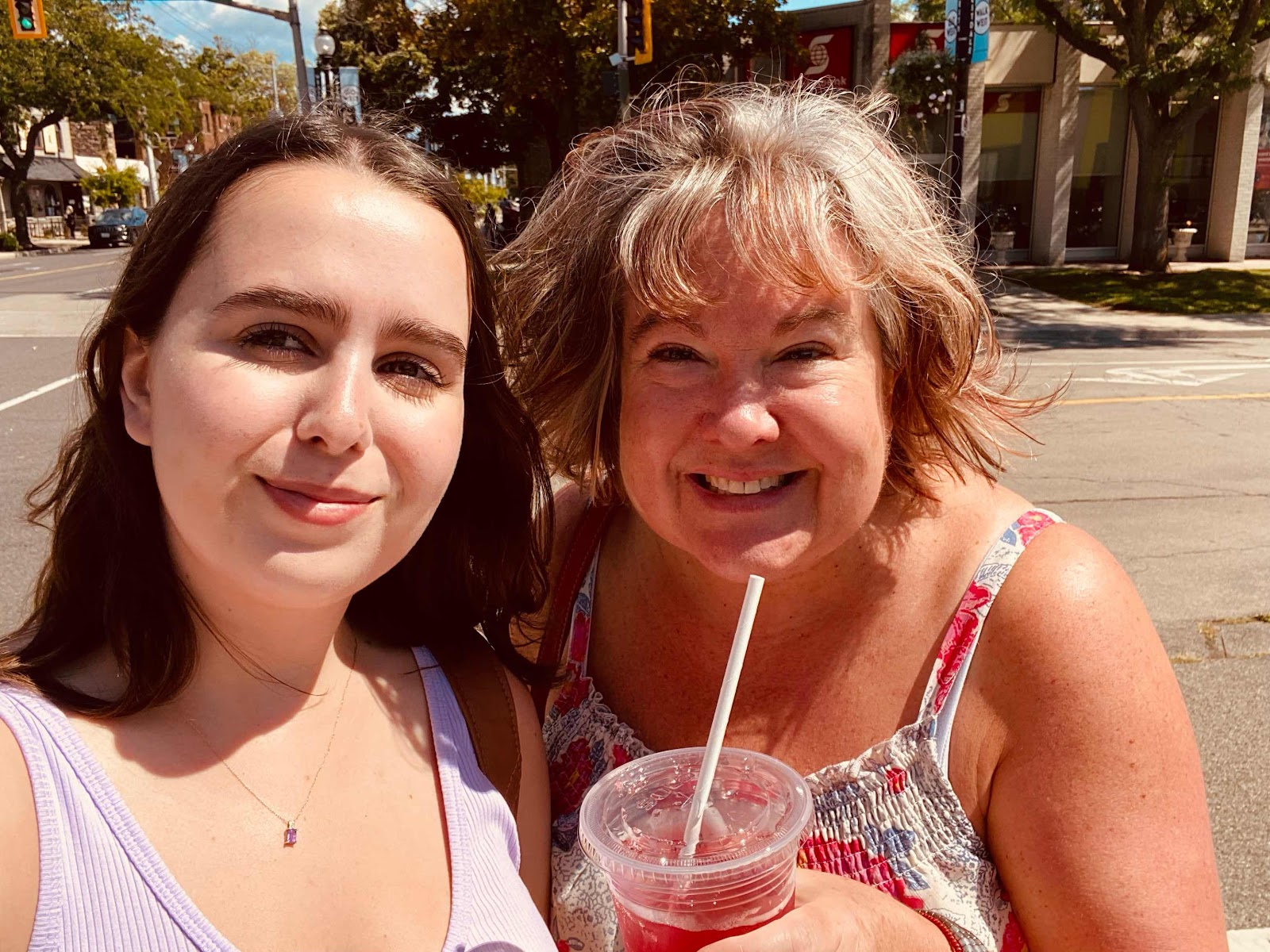 I drove home Wednesday, worked my first couple shifts at various school libraries Thursday and Friday and then we went to a friend's cottage on Saturday. 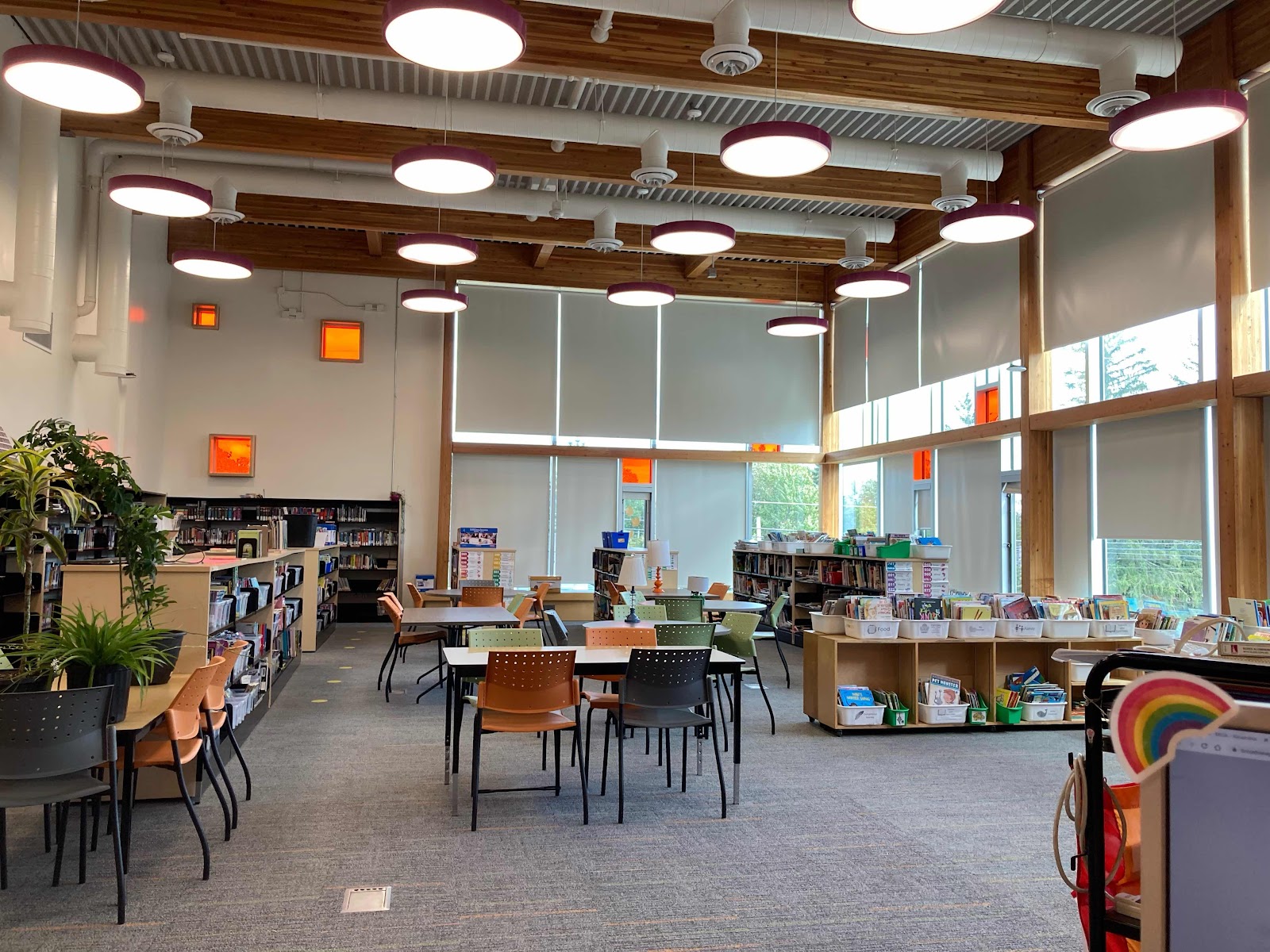 It's a lovely place with only one bathroom that we generally fill to bursting with at least four families with at least two kids each. Our kids are away now and a few others were working so it was a tiny bit less crowded. We are a close-knit crew who nevertheless delight in challenging each other to diverse feats of strength or intelligence and engaging in some truly terrible trash-talking in the pursuit of said feats, so if you looked in one direction you would see a cottage with a wide, welcoming deck and a bunch of chairs for conversation and tree-viewing, and if you looked in the other direction you would see what resembled a redneck shooting gallery - a target board with all the family names at the four corners and one on top so we could all fling knives and axes at the names of our beloved friends, and beer and pop cans for bb guns and slingshots. Inside was ping-pong and spoons (a card game where you try to get four of a kind and when you do you try to grab a spoon from the pile in the middle of the table where there is one less spoon than players - like musical chairs with more violence. Matt said he assumed the game was suited to the talents of the family who proposed it - 'pattern recognition and extreme aggression').

It was all lovely except I threw the axe too hard and now I have to go back to physio for my shoulder - I an officially too old for this shit. Oh well, I would have buggered it up at some point again anyway, and this way I get to sound slightly cooler saying I hurt myself axe-throwing rather than gardening or baking (hey, rolling out empanada dough takes some muscle, shut up). 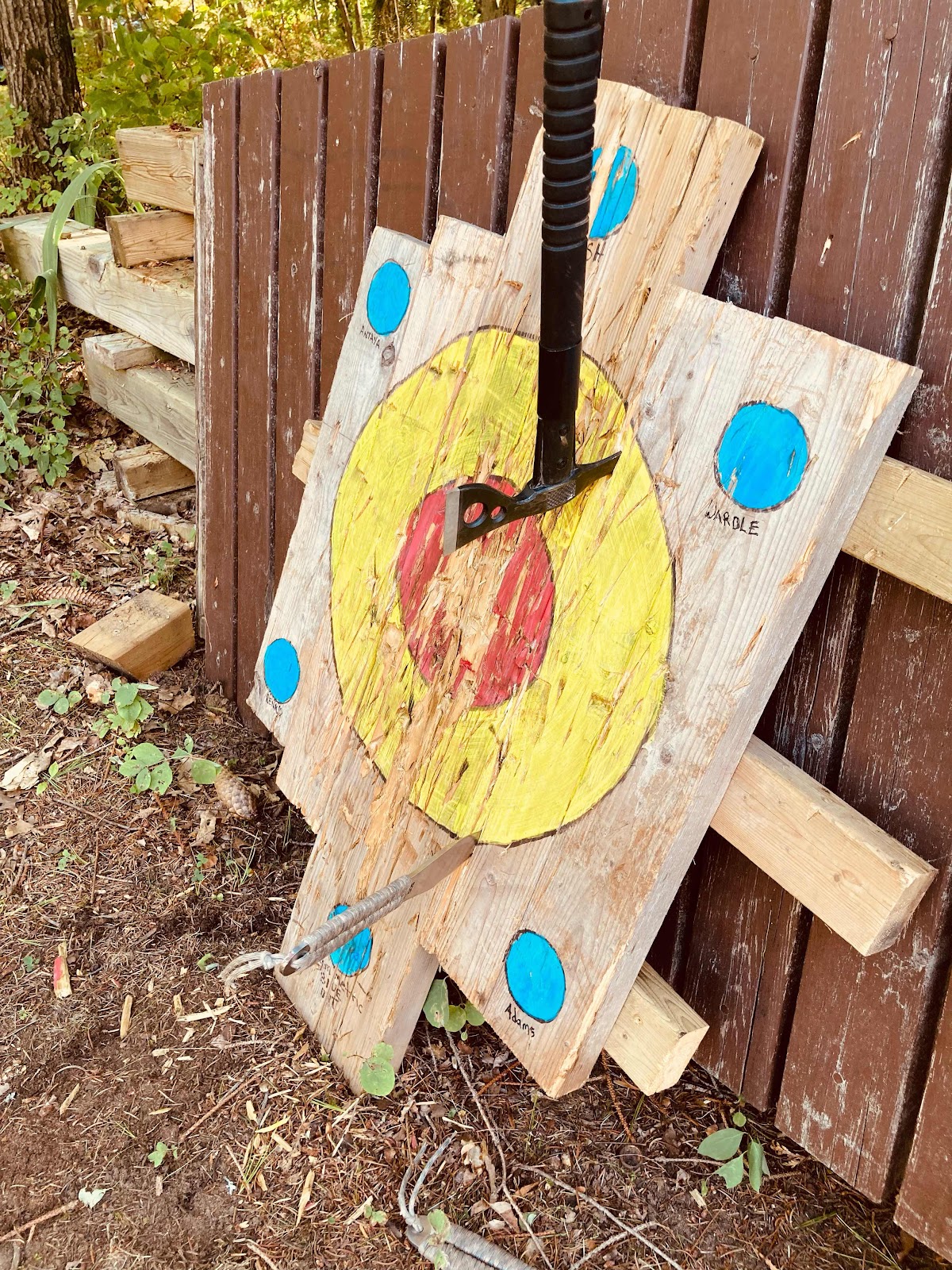 Sometimes I feel lost and sad at the beginning of fall, even though I like fall and look forward to getting back into a routine. Right now I feel pretty good. I do keep forgetting that Eve isn't just down the hall in her room, but I still get her daily download most nights over FaceTime. I'm looking forward to having students in the library in both schools. My friends make life absurd and fun and only occasionally dangerous. And it's finally cooled off and I'm going to go read outside.

Suzanne said…
I mean, if you have to injure yourself, doing so THROWING A WEAPON (in a non-violent way/situation) is pretty bad ass.

The Rod Stewart-shared brain singalong made me feel a little weepy, but in a happy way. It's so good when kids grow up and do the things they are supposed to go! And it's so hard! All at once!
September 15, 2022 at 12:34 PM

Anna said…
Love how your kiddos check in with you with their cooking. J was home alone quite a bit the summer and now has some great recipes under his belt. Several that can be done quickly in a rice cooker (assuming and Insta pot would be similar). I’m just glad I know he won’t just sit around eating toast for the rest of his life😄

Nicole said…
It's so fun that you have such a good group of friends! I don't think I've ever gone to a cottage with a group like that. I mean, I have lots of friends, but not cottage-going friends. I guess it would help if one of us had a cottage, or the ability to obtain a cottage.
September 15, 2022 at 3:33 PM

Swistle said…
Fall is my favorite season, so obviously I feel sad all the way through because (1) winter is my least favorite season and that's up next and (2) soon fall will be over.
September 16, 2022 at 4:20 PM

Ernie said…
I'm now interested in purchasing an instapot and face timing you so you can teach me how to use it. At the same time I'm wondering where I would keep it because of my crockpot collection. (I own 3 but have yet to open the 4th one recently delivered - it's sitting in my front hall).

You have the most amazing friends. They sound so fun . . . in such a unique way. I'll have to ask Coach if he's ever had a patient as cool as you, getting injured while throwing knives.

StephLove said…
That cottage get-away sounds nice. Sorry about the injury though.

I relate to the difficulty of being away from the college kids, but Noah sent me pictures of koalas and kangaroos today from an Australian wildlife sanctuary so that made me happy for him.
September 17, 2022 at 7:16 AM