Showing posts from January, 2011
Show all

January 31, 2011
The kids have piano right after school on Mondays. On the drive over today Angus was reciting his speech on space (in French) to me and Eve. He talked about black holes, Neil Armstrong, and the constellations (yep, it's a little disjointed -- I figured his teacher would call him on it, but it appears I was wrong). After he was done, this was our conversation. Me: That's cool, but I thought you were going to talk about spaghettification. Angus: Oh yeah. I can still put that in. Eve: What's that? Me: It's when a person or object is sucked into a black hole, they get pulled into a long skinny shape. It's called spaghettification. Angus: also, time stops. Me: Yeah, but if your watch stops you're probably not concerned about it if you're being spaghettified. Eve: If you're spaghettified do you die? Me: Pretty much, yeah. Eve: Then I'm going to put it on my list of Things That Would be Fun if They Didn't Lead to Death.
13 comments
Read more

At least I didn't rush out and buy a sports car

January 27, 2011
I took a sick day today. I'm gross, snotty, hacking-up-a-lung sick and my husband has been away all week and it's January. I got the kids to school and tried to do some stuff and all the snot and hacking was interfering so I went back to bed. Then I got up and sat on the couch and watched movies. Then somewhere around 12:30 I was suddenly hit with a tsunami of self-loathing. I had a dream last night that we lived in a different house and the school was just across our back yard and Matt and I would stand at our back door and watch the kids walk across the grass to school, which was lovely, but then there was something about milk, and I was pouring the milk into something and it made this gulping sound that was just like the sound a baby makes while breastfeeding and suddenly I wanted another baby with this horrible, hopeless, physical yearning, and then I was on the couch thinking what the hell am I doing now that I don't have babies or toddlers at home and I have six free
12 comments
Read more

Wordless Wednesday: What were they made of?

Sugar and spice and everything nice: Chocolate lava cake (well duh): Crème brulé (no surprise there): But also snips and (wait for it)... Snails. Yeah, you heard me, SNAILS. My kids who won't eat spaghetti with sauce on it or tacos with salsa, were all over the snails. Of course Charlotte (my niece) was the trailblazer. I wonder how much my sister would charge for her to come live with us for a month. Either that or we have to live on a cruise ship. Anybody have a recipe for puppy dogs' tails?
10 comments
Read more

January 25, 2011
...and she's running around in joyful circles singing about teriyaki and grumpy old trolls, the little bugger. So I was watching this show, and a woman asked a man who had been in a car accident several years before, "did the accident leave you with neurological impairment?". ...and if it did, would he seriously be able to answer that question? Yeah. Good TV. That's all I got. We're having a family sleepover tonight (until my congested snoring drives them all whimpering back to their own beds), and Eve has been pajamaed, toothbrushed and tucked into the enormous chair-and-ottoman combination in my room since six o'clock.
5 comments
Read more 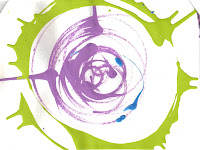 I'm cranky. Not in general. Today was a pretty good day. The kids had dentist appointments first thing. I was going to cancel them because the kids have only been back at school a week since missing a week, and Eve was sick half of last week, but then I was thinking about what I was going to say to the receptionist when I called -- should I go into the whole 'they just missed a week of school right after Christmas, and I don't know if I want them to miss another couple of hours right now', or should I say my daughter was sick and my husband was in France so there wasn't anyone to take Angus if Eve stayed home from school, or should I make up a field trip... it got so complicated I decided it would be simpler to just go to the fucking appointment. Then I dropped the kids off at school. Well, Angus I dropped off. Eve I walked through the school out the back to the portable, then realized there was no one in the portable, then went back to the office where we
10 comments
Read more

In Which I Overuse the word 'Argument'

Sometimes I think other people's pet peeves seem stupid. Then I remember that that's why they're called 'pet peeves' rather than 'legitimate dislikes'. I have many of my own pet peeves that probably seem dumb to other people. I hate that airplane seats recline. I just don't see how it's a good idea, because unless everyone reclines, some people inevitably have the chair-back in front of them invading their personal space. I'm always tense until I figure out if the person in front of me is going to recline their head practically into my lap or not.  Whenever my husband watches sports I have to make him turn the volume way down because the ambient din of the spectators makes me cranky. People who pronounce it 'nuculer' make me want to throttle something. I find it kind of strange and alternately disturbing and amusing that when a blogger or someone on Goodreads gives a negative review of a book, some people who like the book take it re
9 comments
Read more

Burning Up on Re-Entry

January 18, 2011
I hate vacations. Okay, I don't really, totally hate vacations. I hate that my multiple weirdnesses make it impossible for me not to just take a vacation without overthinking and hyperanalyzing and then coming back feeling like I grew two new elbows and a different nose that make it impossible for me to fit neatly back into my old life. I hate that I sort of don't agree with what one of my profs used to call the 'antiseptic week by the sea' but that I don't have the guts to push everyone in my family a different way. I guess the obvious answer is to just stay home, but somehow I haven't put together a convincing argument for that either. I'm an anxious traveller. I always have nearly crippling first-day travel depression -- when I went to Jamaica for February break in third year university I spent the first night just looking for a corner to curl up in and get through the week so I could go home again. Now that I know this about myself, it's a lit
8 comments
Read more

January 04, 2011
As far as I can recall (this may be one instance where my failing memory comes in handy) I rocked the Mama Pants this year. Exhibit one: every time my husband says he's going away on another trip the kids yell "yay!" (this is because they treasure the quality time we spend together, NOT because I relax the TV and junk food restrictions while I'm single parenting). Exhibit two: I don't feel like doing exhibits any more. Oh yeah, I've also been great on consistency and follow-through as a parent.   Angus and I are a mere few pages away from finishing the first book I've ever managed to read aloud to him all the way through. We read a few pages snuggled in his bed before he goes to sleep most nights -- if there's no hockey game, if I'm not out dancing, if he doesn't fall asleep first, if I'm not coughing up a lung. It takes a LONG time to read a book out loud. We tried with a couple of the Harry Potter books, The Golden Compass, The Hou
18 comments
Read more

I just did a quick count of my 2010 reading on the Goodreads website. Not counting whatever books I forgot to record or, more likely, was too embarrassed to confess to reading, it came in at 103. I didn't really care about the total, other than because the other day I was reading a blog I'd never read before which was demonstrably written by a distinctly twit-like person and she said she'd read thirty-one books this year and I though "I hope I've read more than this twit". (And that's why I haven't made a New Year's Resolution to be kinder and more non-judgemental, and if I had it would already be broken). So, in no particular order and in my own wingy categories: A Big Huge 'Meh': Salmon Fishing in the Yemen by Paul Torday Properties of Light: a Novel of Love, Betrayal and Quantum Physics by Rebecca Newberger Goldstein (oh goody, another book about a tormented genius physicist and the student who comes to study/worship at his feet a
16 comments
Read more
More posts