Showing posts from June, 2010
Show all

June 29, 2010
I'm a little surprised to find that no one's stopped by to leave me a "Lazy-Ass Blogger" Award. It's been days, how has the internet survived without me? In my defense...ah, fuck it, no one really cares. School's over and I've descended to a disgraceful level of slothfulness in matters of housework, hygiene, homeowork and -- what's an aitchey word for something to do with blogging? H...H...hell if I know. A family friend from Halifax and her daughter arrived just as school was let out for summer. The friend stayed with my parents and the daughter scampered over here as fast as her little legs could carry her because she somehow discerned that in the permissive parent races I was waaaaay above her conscientious mother. She has a black and white television at home and has to go to a friend's apartment on Sunday to play on the computer because THEY DON'T HAVE ONE (suffering jesus my kids are spoiled). She left this morning, a drooling, dri
17 comments
Read more

The Young Girl and the Sea

June 23, 2010
I'm speaking of this girl . We talk a lot in the mommy-blogging world about parenting choices, parental judgement, parents judging other parents...Abby Sunderland has been a lightning rod for these issues. I've been thinking a lot about this, every time another article or editorial appears, especially in the hours when she was out of contact before she was found safe. I purposely didn't google what other bloggers were saying, because I wanted to try to figure out what I really think, whether or not it's a popular opinion. A lot of people have expressed the opinion that Abby's parents are crazy, neglectful or some combination of the two to let their daughter attempt this. I don't remember the same kind of rhetoric or publicity when Abby's brother Zac sailed around the world alone in 13 months when he was 16 -- I'm not sure that there really wasn't any, but I don't remember it. Would I let my sixteen-year-old sail around the world alone? M
17 comments
Read more

June 18, 2010
Not funny? Laptop playing coy. Stuck in terminal startup repair. And yes, I am a stupid douchebag who didn't back some stuff up and I deserve everything I get. But come ON, it's my birthday month and SO NOT FAIR. Also, I'm tired and everything hurts. My elbow hurts. My knee hurts. My neck hurts. My back and feet and eyebrows hurt. My vagina hurts. Apparently now that I'm forty I can party like a twenty year old, but only if I'm prepared to feel like a sixty year old for a few days after. And the school barbecue was last night. I hate the fucking school barbecue. Eve loves the fucking school barbecue. Naturally -- what's not to love about standing in an enormous line for substandard food, standing in more enormous lines for some ridiculous inflatable things, some of which have height requirements which aren't announced until the too-short kids get to the very end of the fucking enormous line and make me have to get a little snippy with a volunt
14 comments
Read more

June 15, 2010
It's my actual honest-to-goodness fortieth birthday today. But I'm going to save any philosophizing or musing or stock-taking or life-examining for later. I'm still rocking my birthday month, and the living is groovy. Pam the perfectly perfect party playmate took me for lunch and a pedicure today, and if I was any more relaxed I'd be ooze. I'm even too lazy to get my camera and show you the pictures of our smashingly Shrek-coloured toes (yeah, O.P.I , they of the wonderful reputedly-carcinogen-free and horribly-bad-punningly-named nail polish has a line out that goes with the new Shrek movie. Because nothing makes you want to run out and have your toes painted like a...Shrek movie? Whatever, shut up, my toes are awesome). I know there are more important things going on in the world. I know there are more weightier issues to blog about (and no, I'm not referring to my forty-year-old ass). But I'm reminded of the time some of my high school friends
19 comments
Read more

Variety is the Spice of Life. Except when it Blows Donkey Chunks.

June 08, 2010
I was a happy third wheel on a date with my friends Janet and Dave tonight. First they said they were taking me out for Indian food because it's my birthday month and Janet said she was too lazy to buy a card (to which I say, if any of my other friends want to substitute beef vindaloo and yellow dal for some overpriced Hallmark slogan, have at it!), then we saw Splice . Overall I thought it was really good -- smart, well-written, affecting and effective. Janet and Dave didn't like it nearly as much. Janet and I often don't like the same movies, although we have a large slice of overlap. Dave asked her how this one was on a scale of one to Passchendaele (the 'war movie with a locket') which she loved, and continues to profess her love for in the face of much mockery, and really, you have to respect that. I'm fine agreeing to disagree about movies. Different people like different stuff. It's what makes the world go around, right? Except then peopl
8 comments
Read more

June 07, 2010
I used to have very elaborate, vivid dreams on a regular basis. They were mostly quite entertaining, except for the ones that made me feel like I was going to die or wake up with various organs in the wrong place. I often knew I was dreaming, and the only time this would be bothersome was when I was trying to wake myself up and instead ended up surfacing through several layers of dream, like continuously changing tv channels -- I'd keep closing my eyes and opening them and seeing some damned fifties living room arm chair and lamp or battle arena instead of my bedroom. I would write these down and let my husband read them and he would say they could be made into Batman movies. I can still remember some of them very clearly, without reading the written accounts. There's one image of a burned, blind man weeping on a long stone staircase with his face in his hands that I can't shake. Also, standing humiliated on a public street while a policeman cites me for improper groo
10 comments
Read more

I'm turning 40 on June 15th. Do I feel that this is an occasion for stock-taking, soul-searching, and various other compound terms that start with the letter 's'? Do I feel that it is a cause for mourning my youth, regretting the things I haven't done and other general mid-life crisis-type hand-wringing? Do I worry that life has passed me by and that maybe forty isn't, in fact, the new thirty , that the best years are behind me and I've wasted too much time being anxious and neurotic and shy? Hell no. What I feel is that this month I am going to party my forty-year-old ASS OFF! My friend Anne Marie obligingly flew in from Halifax on Monday in order to be poised to help me start celebrating on June 1st. Okay, there was this tiresome little matter of the exams she had to do first, the ones the Royal College of Physicians and Surgeons of Canada insist on if she wants to proceed with the actual business of practicing medicine, but that was incidental. Yo
17 comments
Read more 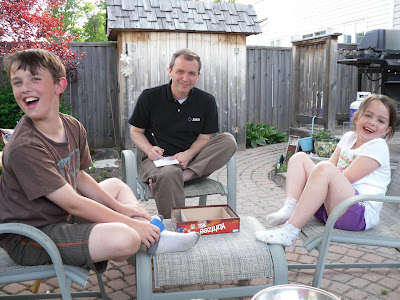