Sorry For Being a Boob that was Unclear About My Boob

Whoever was "a wee bit fretful" on my boob's behalf, I adore you and I apologize for my superstitious fear that if I said unequivocally "I do NOT have breast cancer", cancer would drop out of the ceiling and punish my hubris. My doctor did, in fact, say "everything's fine", and I had been on such a sine wave of absolute denial and abject terror (for something that millions of women go through every day), I wasn't even sure how to feel.

No, that's dumb, I feel good. It's the summertime, my children are home, my best friend was just here for Bluesfest, we found a perfect desk for Eve at IKEA yesterday and my mom bought it, my dad is feeling better, and I yesterday I made TWO phone calls I'd been dreading and got two annoying things crossed off my list. Local corn is out, and I just made a really good turkey sandwich.

Pat, you live next to Hamilton? For some reason I thought you lived near Nicole - probably because I first saw you commenting on her blog, and as we all know, that's how geography works, right? It was the Tiny Shop Bakery at Hanes Corn Maze that we went to, and everything we got was fantastic. Matt and Eve are headed back to Hamilton (the city) this week-end to take delivery of her bed and put the second coat of paint on her room.

I bought the bed when we were down the last time, and the staff at Sleep Country in Ancaster were so lovely and helpful and found us the perfect bed and assured me that we could buy it and schedule the delivery later (because we weren't sure when Matt and Eve would be coming back). So I bought it and had to pick an arbitrary day for delivery which they said I could change later, and then immediately started worrying that they were just shining me on and when I tried to change the delivery it would be an issue. And then when I called back to change the delivery they called me back within five minutes, changed everything and sent me an email with the updated delivery date immediately. Now that I'm talking about it, I need to go leave them a great review online and send a thank-you note. I am so pleasantly surprised and delighted with the whole experience. Or maybe I should wait until they actually deliver the correct thing? Oh Lord, now I'm worried I've jinxed myself. If I've ever said I'm not a superstitious person don't believe me, clearly I'm seconds away from throwing chicken bones and reading tea leaves.

Photo dump from our last visit to Hamilton (the city). Eve worked her butt off building her Target bedside table and painting. The colour it was wasn't terrible, but it literally looked like someone had walked on the walls. We went to the nearby Canadian Tire and got some paint, then went to look for a hammer because we had realized we had everything but. We ended up finding the same employee who had sold us the paint in front of a glass case of hammers that was locked (are hammers a big theft risk?) and a bit intimidating - there were a lot of them, and they were mostly really expensive. When we told him we needed a hammer he said "are you doing carpentry, or putting together IKEA furniture?" Eve told him kudos for not making assumptions, but she was literally in the midst of putting together IKEA (Target) furniture, and he sold her the tiniest most adorable and very affordable hammer (with a surprising amount of heft to it) that was exactly what she needed. 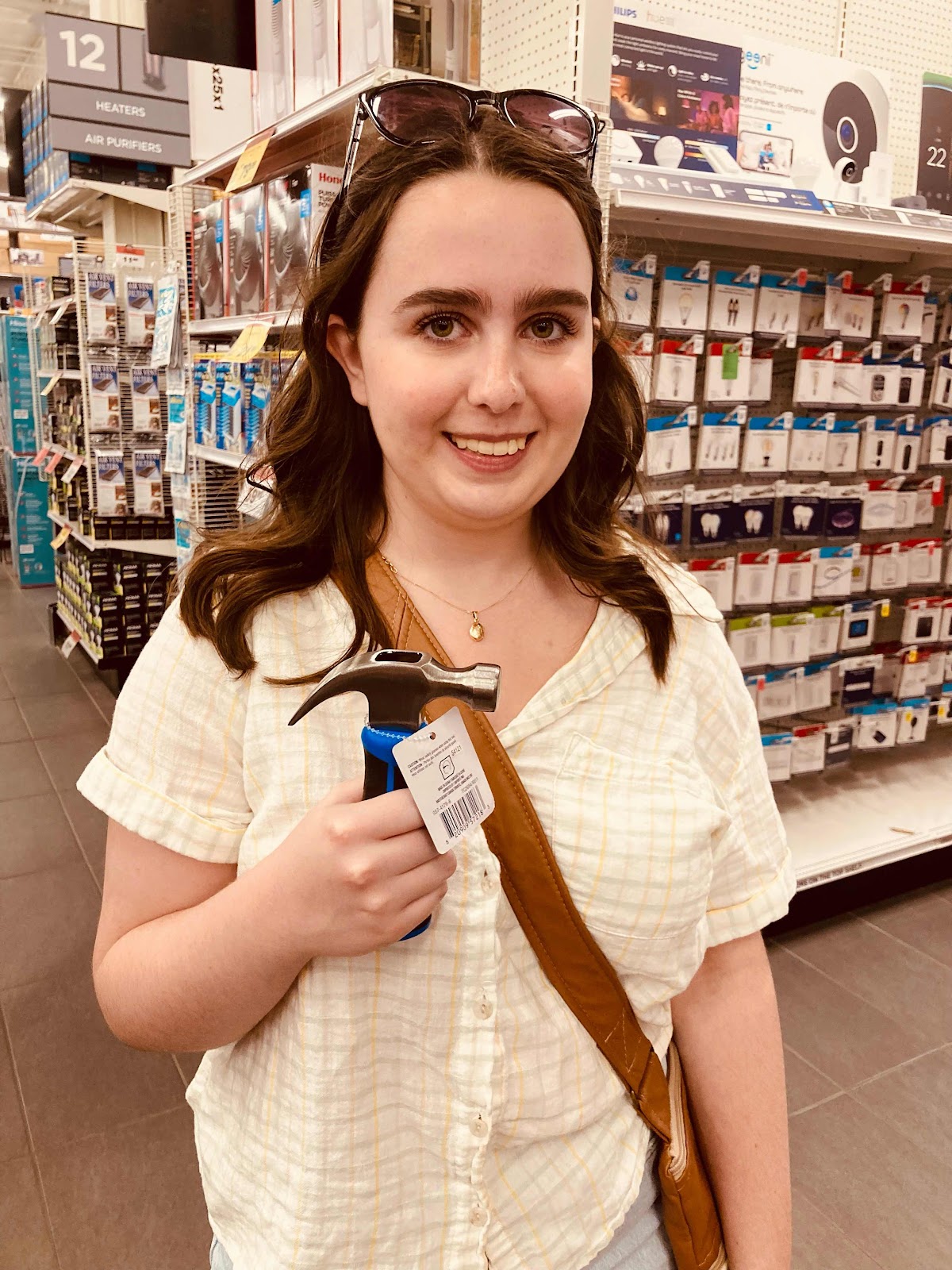 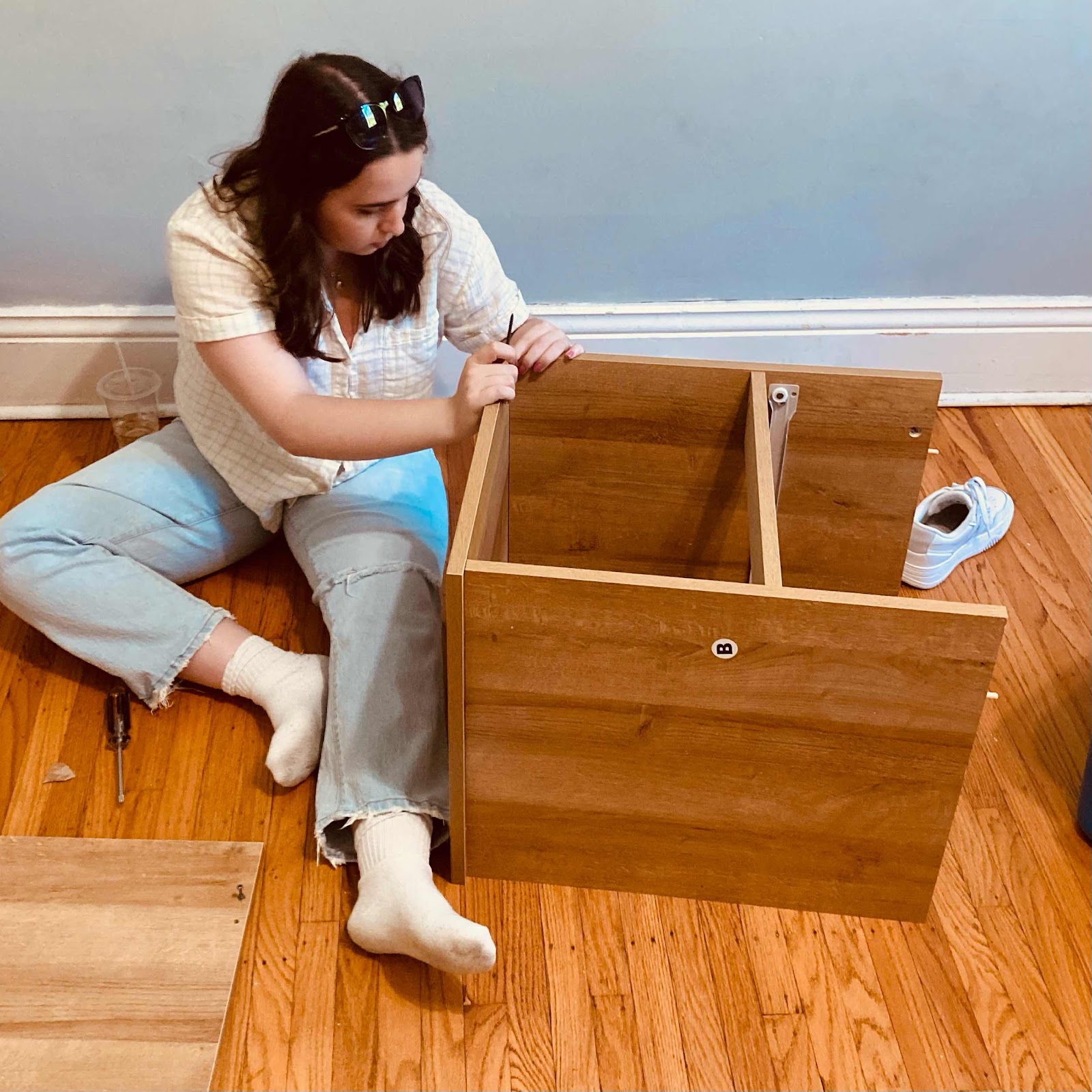 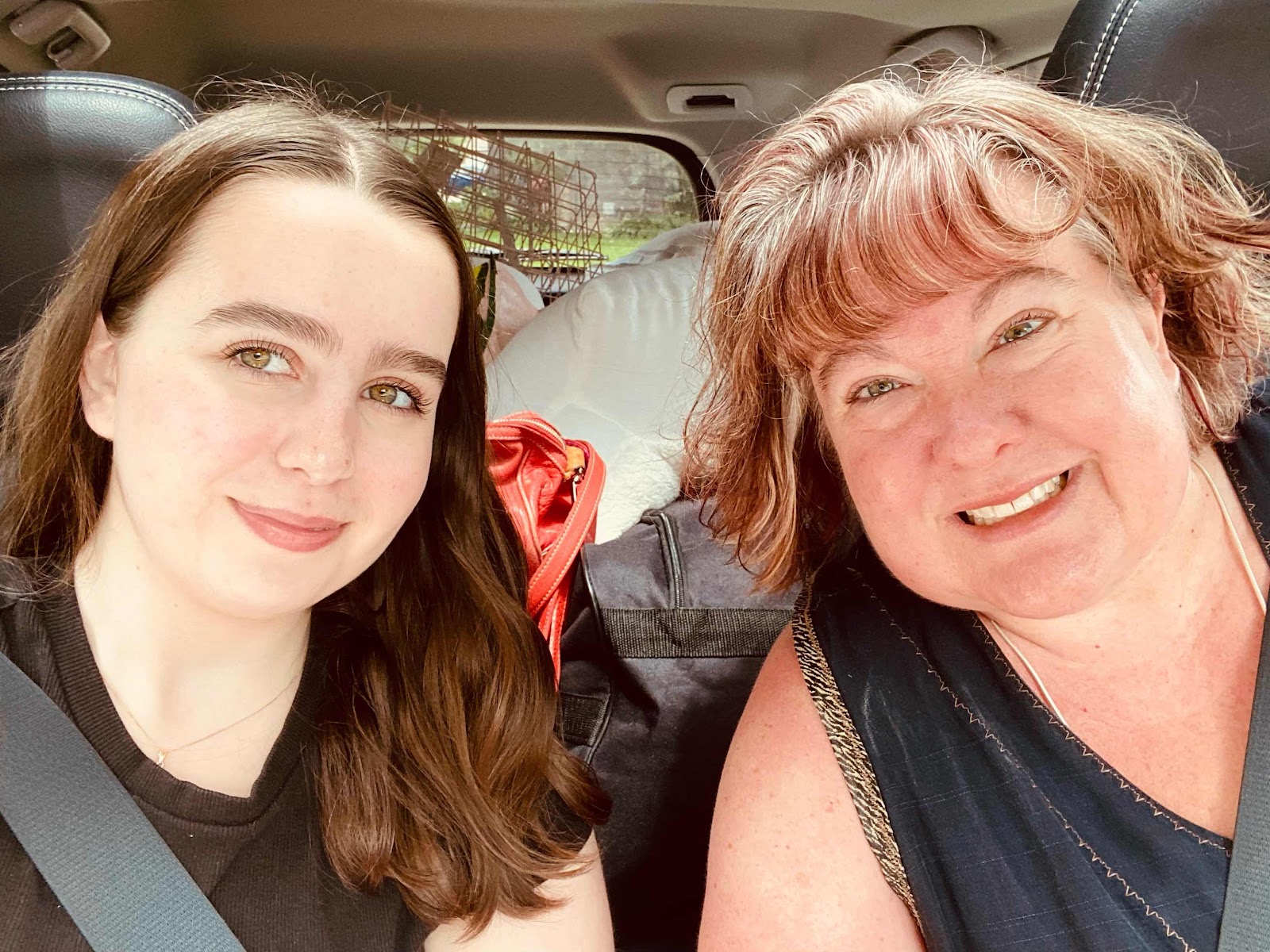 And while we're on the subject of Hamilton, and in reply to Steph's comment, on Sunday we SAW Hamilton (the musical) - twice postponed, we didn't really believe it was going to happen until the music started. I think I said last year that after listening to the soundtrack a million times and getting to see the movie of the Broadway version that maybe I was okay if I didn't get to see the real thing. Eve said "that's dumb", and she was correct. It was wonderful. Eve and I had a subscription to Broadway Across Canada that year so we had our regular seats pretty far up in the orchestra section. We had bought another pair for Matt and someone else, still in the orchestra section but a few rows back. We ended up taking Eve's friend Jackson. I asked if she was going to sit with him and she snorted and said "uh, no, I'm sitting in the good seat". All's fair in love and theatre, I guess. 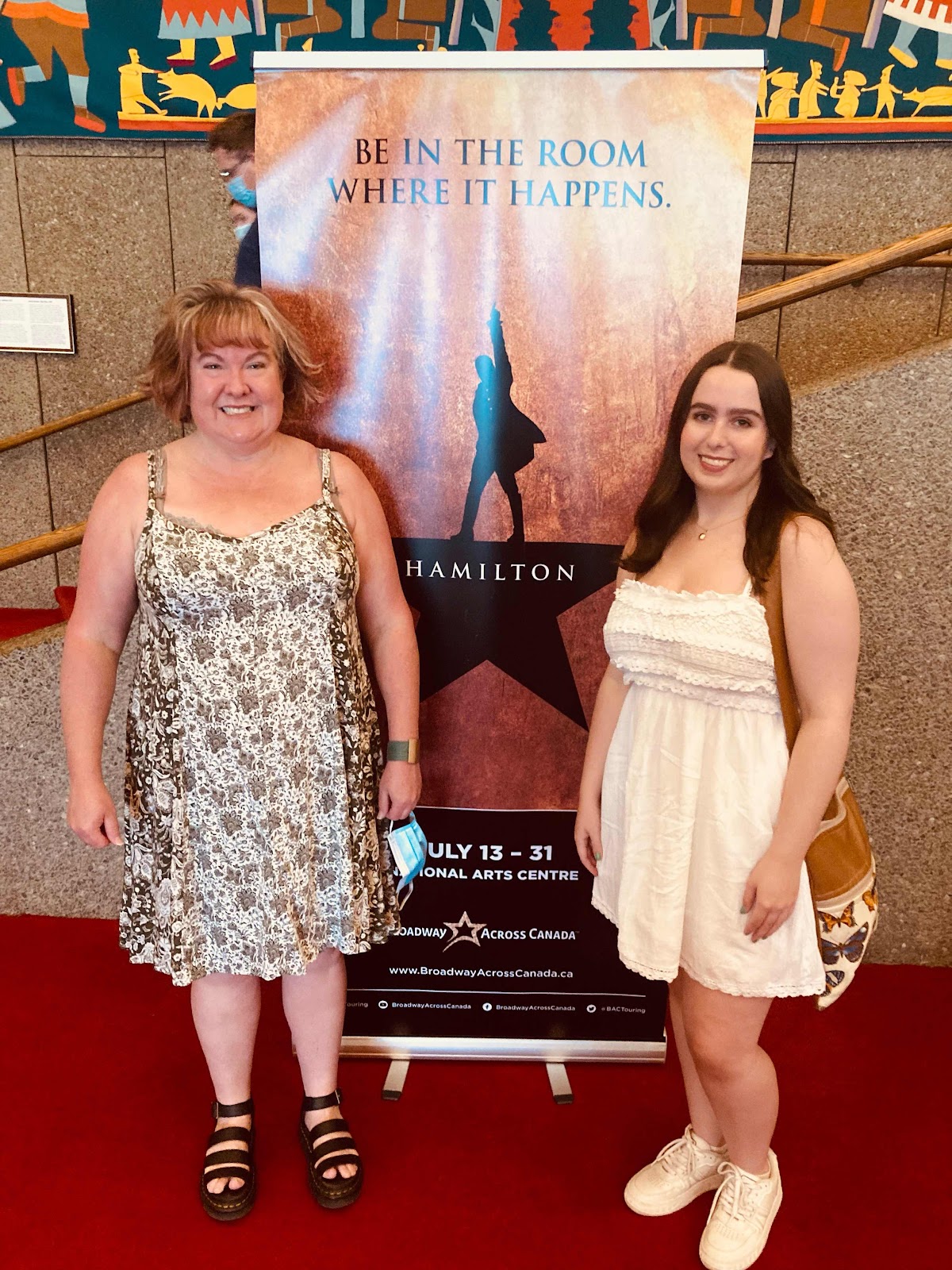 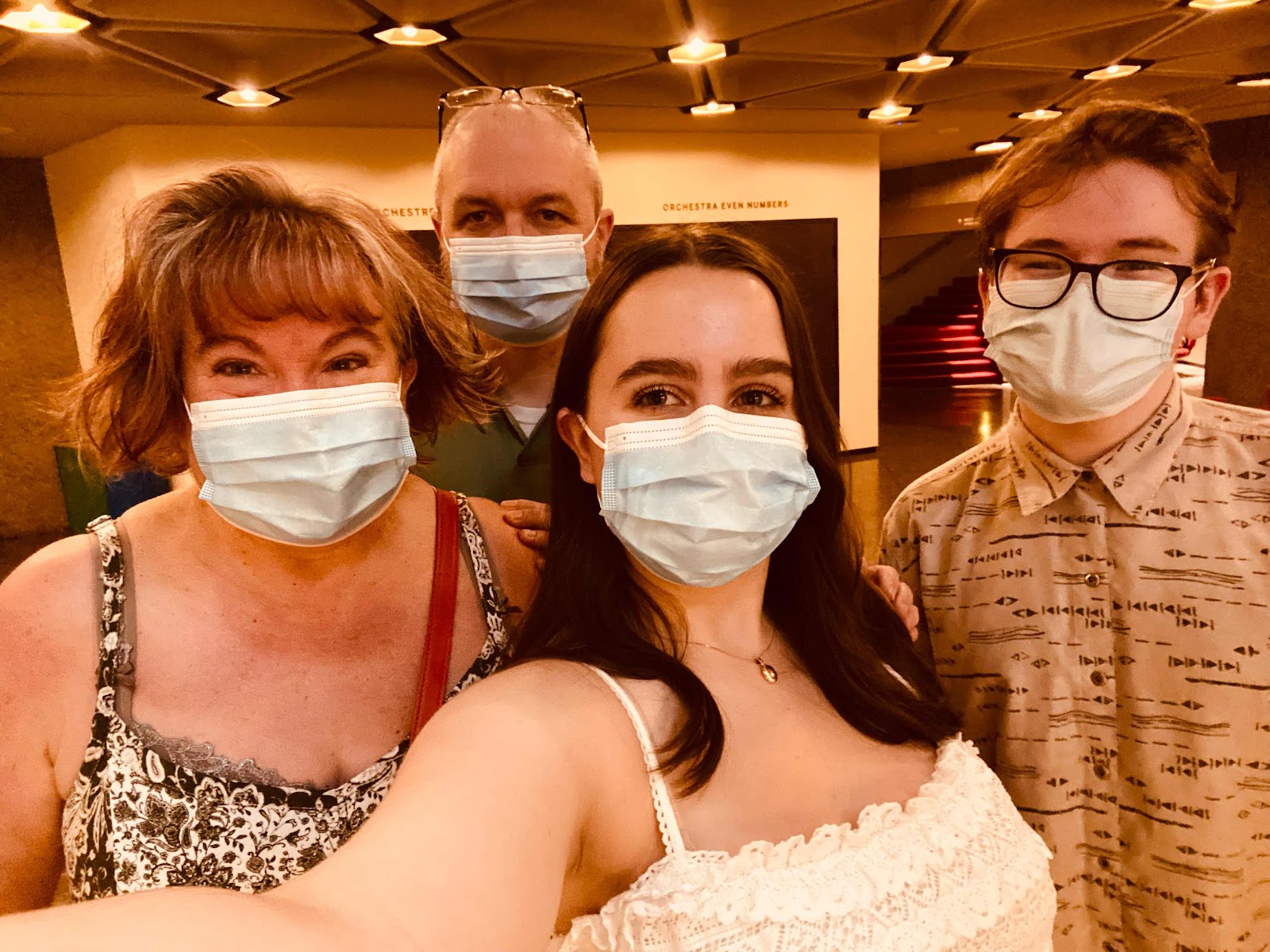 Then we went home and picked up another friend and went to the grocery store to get snacks before Drag Race. So the vibe for the whole day was artistic, you might say. 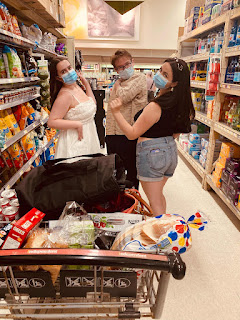 Nicole MacPherson said…
I'm so glad you FINALLY got to see Hamilton! Almost as glad as I am that your boob is okay :) Okay, I'm more happy about your boob than Hamilton, but there are different kinds of happy, right?

YOU HAD A GOOD EXPERIENCE AT CANADIAN TIRE.

Pat Birnie said…
Yes I live in Burlington, right next to Hamilton (the city). I think I know where that bakery is. I will have to try it, it looks amazing. I’ve never lived in Calgary, where Nicole is, but two of my adults sons moved there 10 years ago. One recently moved back to Ontario yay! So glad your boob is ok, and that you got to see Hamilton (the musical) finally!
July 22, 2022 at 6:55 AM

Suzanne said…
Yay for happy healthy boobs! Although I feel you on the superstition angle, though. Love the photos of your Hamilton experience -- everyone looks like they are having a blast!

Ernie said…
Hooray for healthy boobs and for the whole uplifting paragraph of things that make you happy . . . right down to the turkey sandwich.

Swistle said…
I don't think I ever noticed before, but does your girl have YOUR EXACT EYE COLOR??

StephLove said…
I'm glad it wasn't cancer and that you had a good time AT (not in) Hamilton and that there are general summery good vibes in your life right now.
July 26, 2022 at 5:52 AM

Shan said…
Yay for okay boobs and seeing Hamilton and the Tiny Shop Bakery is cute and Sleep Country is like 5 minutes from my house!
July 29, 2022 at 11:43 AM