I am a hot mess. I had a great conversation today with friends in an ongoing Facebook chat (ongoing for ... I don't know how to check how many years now - Hannah? Nicole? Any idea?) about how two of us were hanging back from the conversation because we were struggling and didn't feel like burdening the others with our complaints, even though we know rationally that whenever we do, everyone is compassionate and supportive, and we feel better. One of depression's major Insult to Injury Features is that it both takes you out at the knees and whispers in your ear that your pain is unearned and unimportant and no one will believe you or care.

But first, the good stuff: 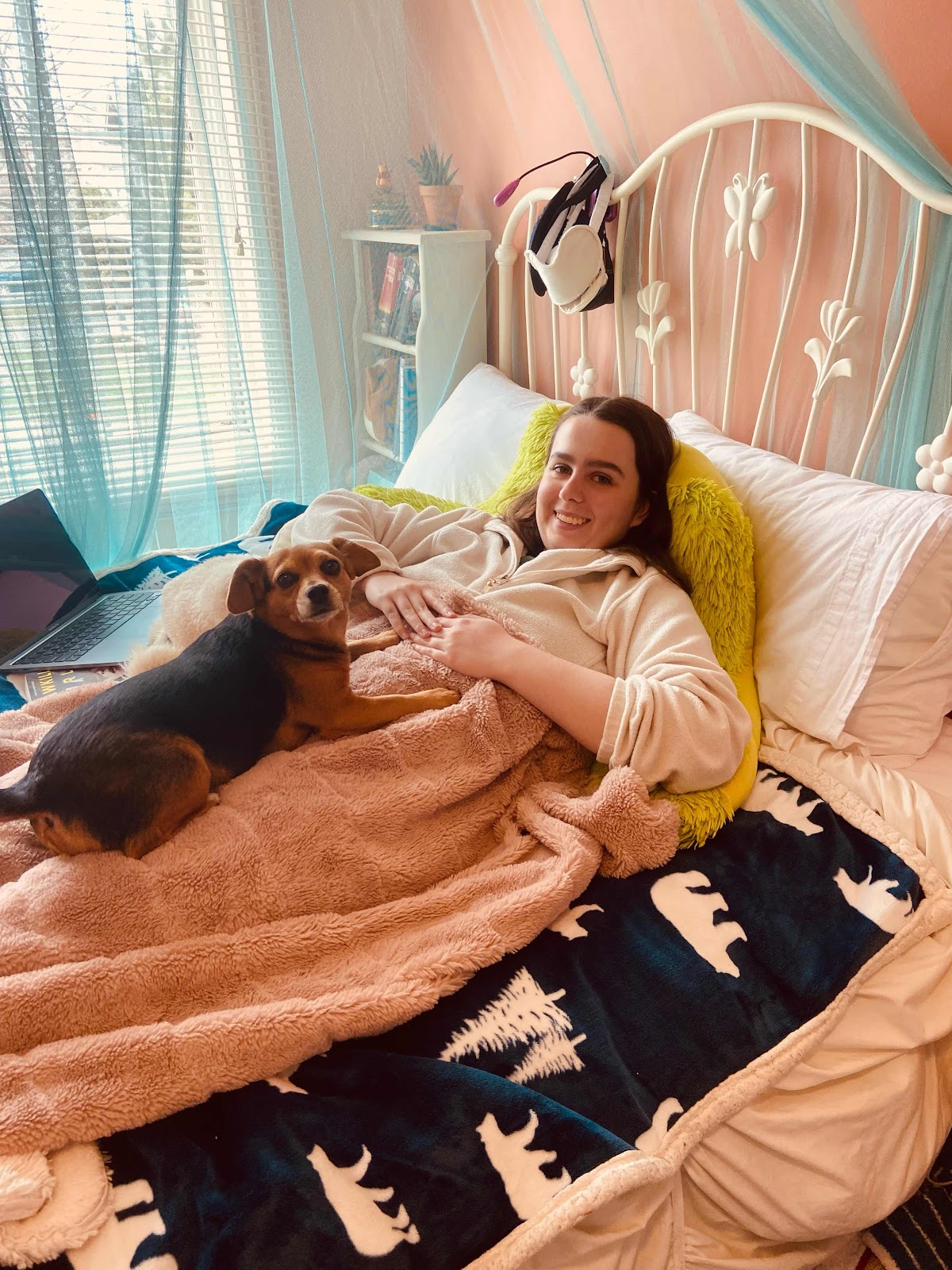 THERE'S AN EVE IN IT!

We stowed a couple of things (microwave, bedside table drawers, bin of dishes) in Matt's brother's garage not too far away because she wasn't going to have access to her house until May. We had pretty easily fit everything in the Rav going down, with a few things in one of those rooftap bags Matt had bought for the purpose. Everything was going fine this time, except it was very cold and windy. 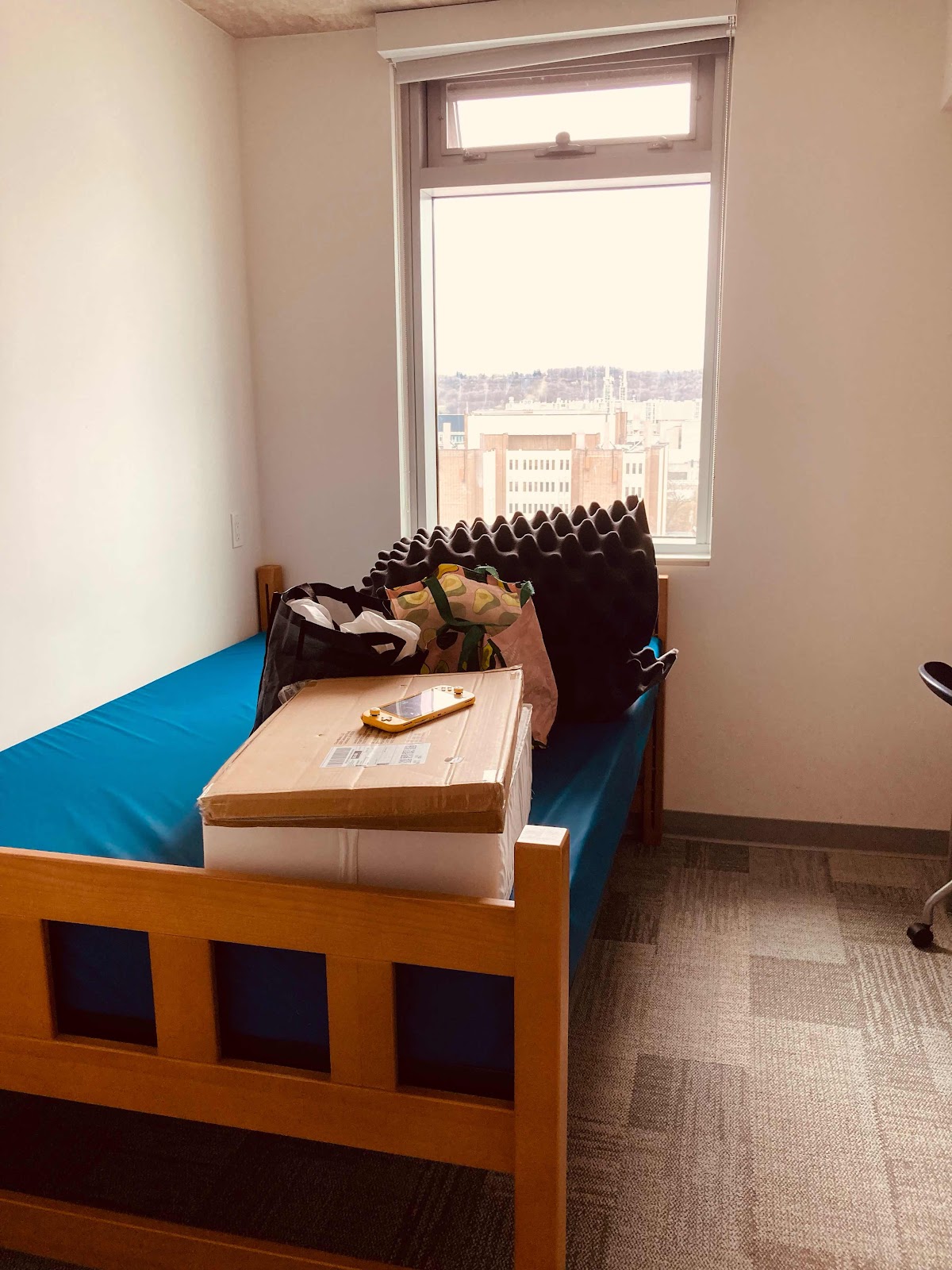 We had almost everything ready to go, and then remembered we had to unzip the bed-bug-proof mattress cover and take the mattress topper off the bed. I can't find a picture of it, but it's a black foam thing that looks desperately uncomfortable - like an upsided-down egg carton with little spikes - but according to Eve (and her friend Erin who loved Eve's bed) it was the best thing ever. Eve got it off the bed and rolled into a pretty manageable bundle while I carried one load down, and then I came back and we brought it out to the Rav. Unfortunately, Matt wasn't quite ready to put it in anywhere, and an unanticipated effect of it sitting out in the cold is that it started to unfurl and became cement-like in its properties, so when we finally tried to stuff it in somewhere it was very, very difficult. We were basically helpless with laughter while not being able to feel our hands. 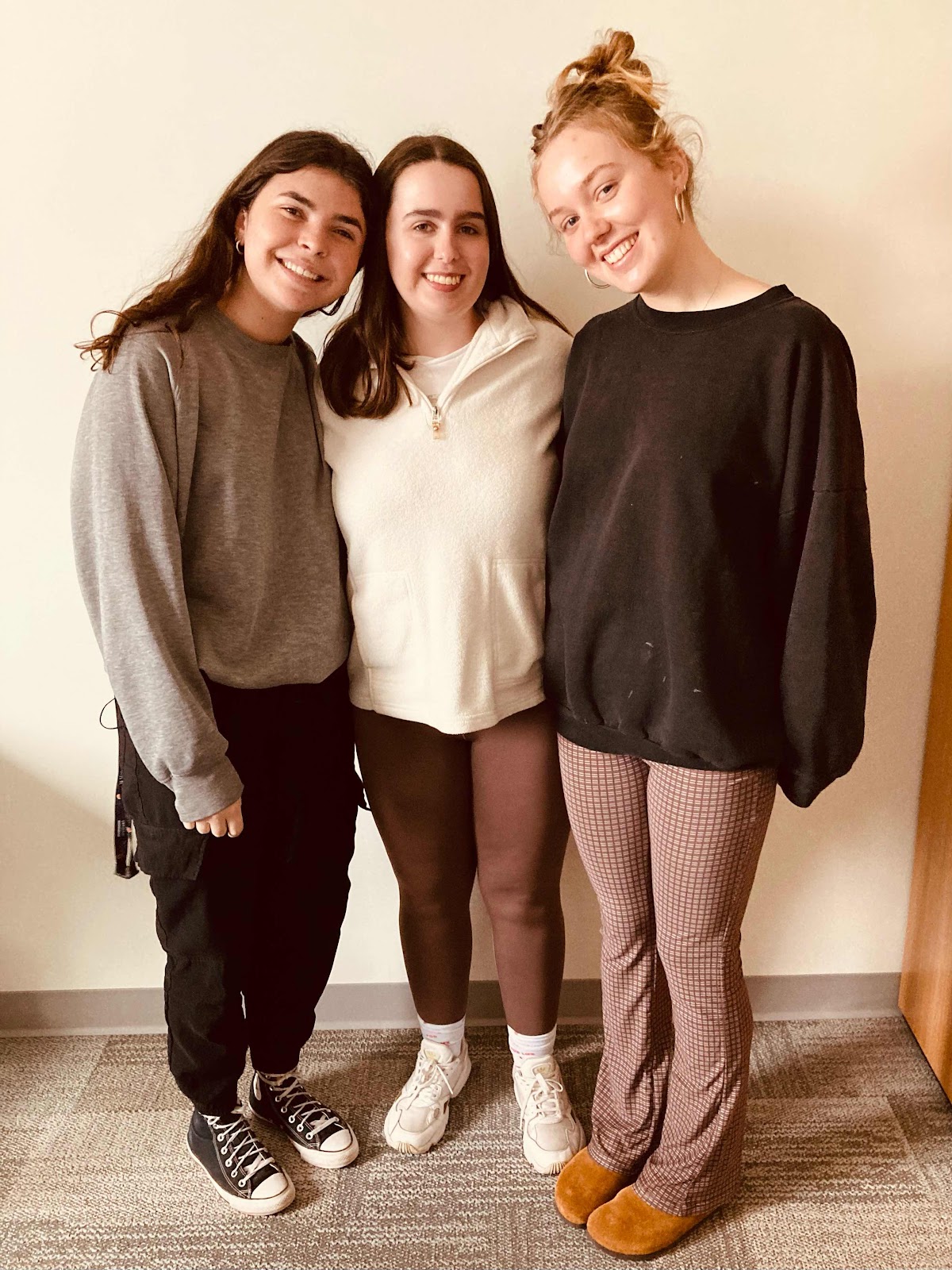 More and more people kept showing up to say good-bye as we were finishing up, and I was having huge flashbacks to the bittersweet end-of-year times more years ago than I can actually believe. Eve and Erin and Isabelle mentioned that they'd meant to have a sleepover in one room and never managed it, so I told them about when a friend and I hauled our mattresses out onto the balcony one night in spring for an outdoor sleepover. Then we realized that my residence didn't even HAVE balconies anymore, which is a travesty of justice as far as I'm concerned. 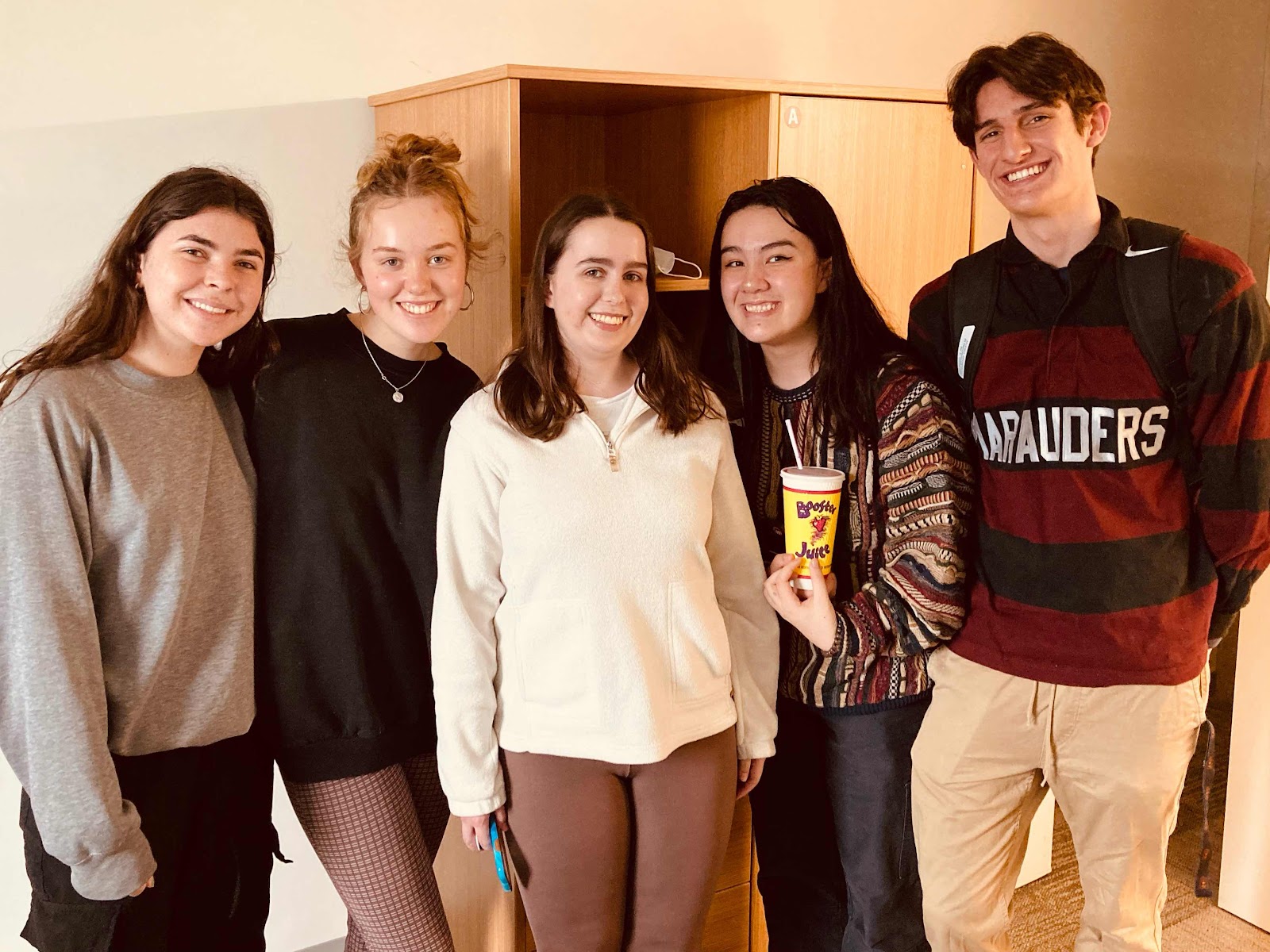 We went over to the Department Head's office, the one who is my old professor and had asked us to come say hi before we left. She had made a special point of coming over to talk to Eve at the Arts and Science formal, which gave Eve huge street cred in the program because this professor is basically a celebrity among the students. Now she's asked if she can stay with us for her brother's wedding in the summer, which is hilarious because now Eve can tell everyone she had an actual sleepover with Dr. Wilson. 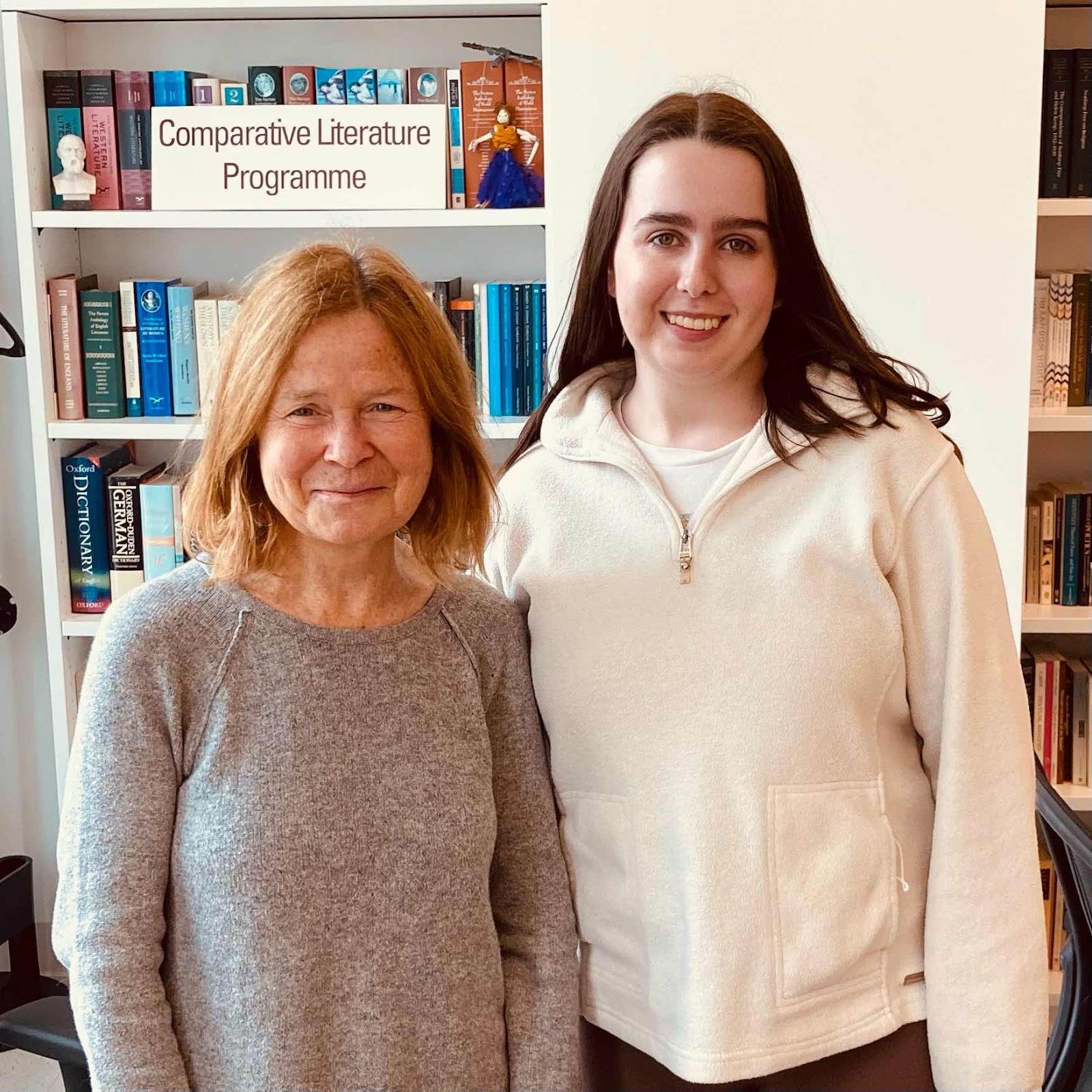 So yes, my daughter is home. I was thinking about one of Eve's friends who has mean unsupportive parents, who got into a really good program at a university a few hours away. In the fall I asked Eve how the friend was doing and she said "she's surprised that she's away from her parents and still has depression." Turns out my daughter is home and the weather has been lovely for a few days and ... I still have depression. I also have a kitchen full of tiny ants. Is this a thing? I've had ants, but never tiny ones. It must be a thing, because when I searched "ant traps" on amazon, one of the suggestions was "ant traps for tiny ants". As Eve said, I feel like ant traps should be effective on every size of ant.

I also have the photographic evidence Steph of All For the Love of You asked for a few months back when I mentioned wearing Doc Martens for my wedding. We had been asked to find some old baseball pictures of Angus for Seniors Day at the last minute, and Matt had found some but I was worried bringing them unframed would be risky so I went down to the storage closet to pull a few 8x10 frames out of the towering unsteady pile of frames and suddenly, there it was: 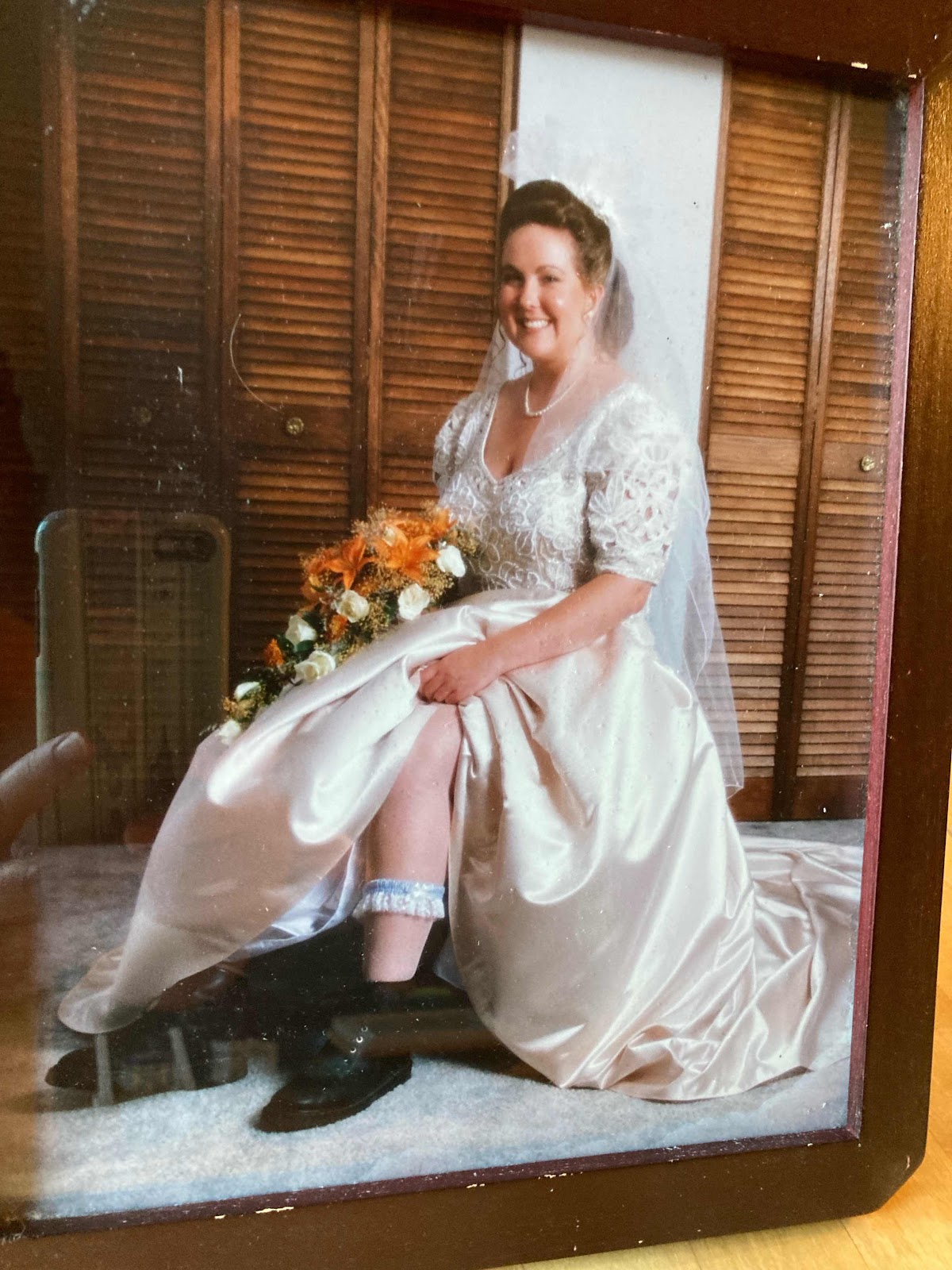 I can't remember the context in which I mentioned it, so just in case I didn't tell this part of the story, at one point during the dance I stepped out the back door to get some air and there was a small crowd of people. At one point my sister said "Ali, can you flash your boots so this gentlemen can get a picture?" I hiked my skirts and posed obligingly, and after the picture was snapped, Matt's uncle grabbed my shoulder and said "oh thank God, I thought she said 'boobs'".

Ernie said…
Sorry about the hot mess that you are, but so glad Eve is home. Sorry about the black spikey thing and the cold hands, but it sounds like it was entertaining. I think those things look very comfortable. I love the wedding photo. Evidence that you are super cool. But also, oh my gosh - I love your wedding dress. Laughing at the 'boobs' vs 'boots' comment.
May 11, 2022 at 7:43 PM

Ernie said…
That should say sorry that you are feeling like a hot mess . . . too many people distracting me as we are back to our WHO IS DRIVING WHICH CAR TOMORROW conversations, since Tank is home. Great to have him back. Hadn't seen him since January. Weird, since we saw the kid who was overseas and not the kid who was 6.5 hrs away, but he opted to go away for spring break and didn't come home for Easter. Anyway, I sincerely hope you feel better and I'm guessing that Eve's presence will improve things. Fingers crossed.
May 11, 2022 at 8:16 PM

Nicole said…
Eve's home! And for some reason I thought you had WHITE docs for your wedding, I am charmed that you had black ones! That's a great photo. Although, I mean, we'd all be happy to see your boobs too.

StephLove said…
Thanks for the photo! I'm sorry things are so unfairly hard for you right now, but glad Eve's home. Noah will be home in a couple day and I'm impatient for that.
May 12, 2022 at 6:07 AM

Suzanne said…
That wedding photo is STELLAR. And I am so pleased that Eve is home hooray! What a great mindfuck of the universe, though, that everything can be great and yet we can still feel like shit. It shouldn't WORK like that. It just SHOULDN'T.
May 12, 2022 at 7:55 AM

Swistle said…
I identify with so much of this post, I almost didn't leave a comment because I felt like I'd just be saying me too and me too and me too. Or else being weird, like by saying I actually choked up a little to see A HOME EVE! That is not my daughter! That is not my home! Why am I so happy to see her home?? Well, here we are, this is how we do things in the Hot Mess Club apparently.

I especially liked the part where you and Eve each had a "This is the situation, and yet there is still depression." I attended my firstborn's college graduation recently, and I was sitting there during the ceremony thinking how I should be feeling so happy and relieved and glad and proud and so on, and instead I was feeling extremely, extremely low---like "What is the point of any of this"/"Everything is a capitalist scam" kind of low.

The kid of one of my friends is wearing pink floral Docs with her pink prom dress. I just love it. I wish I could go back in time and do that. More fun comfortable shoes, fewer unfun and uncomfortable shoes, that's my vote.

Lynn said…
So sorry you're having a rough time honey. Sending all the hugs, and know that using this space for a good wallow is what it's all for.
May 16, 2022 at 9:28 AM

Busy Bee Suz said…
I'm so sorry you are having a rough time. Sending up good mojo and positive vibes from way down here.
How lovely to see Eve's smiling face; I know that does make it somewhat better.