July 29, 2013
SO, in deference to the Baseball Gods, They Who Are Real and Must Be Propitiated, we've been conducting our summer plans as if Angus's Little League Majors WEREN'T going to win Provincials and have to go to Glace Bay, Nova Scotia three short days after the championship game.

They played the final on Sunday. Angus pitched the entire game except for the very last batter (at the bottom of the sixth, he only had 7 pitches left of his allowed 85. My Dad said "they won't use him." I said "yes they will - they'll use him to his very last pitch". My Mom, with perfect grandmotherly faith, said "seven pitches - he can get two out with that". AND HE DID.) He was also responsible for four of the six runs batted in, and hit the game's only home run. My brother-in-law, the cardiologist, got up at six a.m., took the train to Ottawa, rented a car to drive to Casselman, watched the game then turned around and went back home to work that night. It was nice that Angus made it worth his trip. 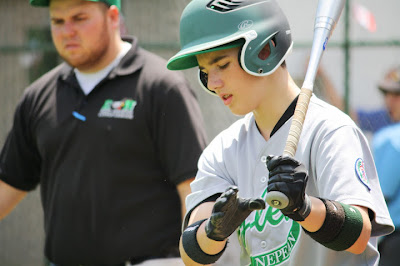 My poor husband is running around like a headless chicken trying to help the woman who is organizing accomodations and plane tickets and who's bringing what equipment and what has to be carried on because we're screwed if it gets lost and the hosting city was supposed to be billeting players but then there weren't enough families willing to have billets so then they wanted to stick all our kids on cots in classrooms in some school and we said, uh, NO, so now it looks like everyone is staying in university dorms and my husband is trying to shake his pissed-offness at how big a screw-up this is, but it's hard, because this city has known for years that it was hosting, so GET IT TOGETHER, FOLKS, and I'm just doing laundry and keeping my head down and Eve is totally confused.

Did I mention that they're going for the whole tournament, which is twelve days, whether they win or lose? And if they win, which they PROBABLY won't, because some team from B.C. usually wins, possibly because they get to play baseball for so much more of the year there and here, well, we get weather, but the last time it was NOT a B.C. team that won and went to the Little League World Series it was an East Nepean team, which is, um, us? And that if they DO win, they go directly to South Williamsport Pennsylvania and stay for the WHOLE Little League World Series, and that the parents basically sign their child away at the beginning of the tournament and see them again at the end? Meaning I could not see my husband or kids for more than three weeks? (Matt said to Angus "please don't win. It will be very expensive" and Angus said "okay. The last game, I'll throw everything into the dirt"). 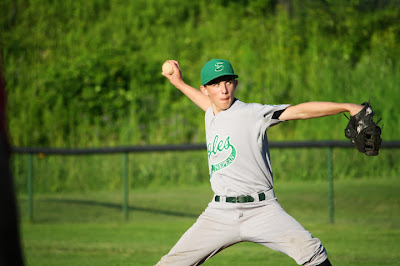 It's crazy. I'm happy for my son - this is going to be an intensely memorable time. I'm happy and sympathetic towards my husband - this is going to be an intensely memorable time and a huge pain in the ass. I'm a little bewildered on my own behalf - I knew this was a possibility, but it seems sort of surreal now. Eve and I will just have some fun girl time and be supportive from a province or so away. Angus's coach hugged me and thanked me for giving birth to his star player at the team party. Um, you're welcome? One of the other parents made some drunken comparison between Angus and Mike Tyson in his early days. He wandered away in the middle of it and I locked eyes with the coach's girlfriend and said "did he just compare my son to Mike Tyson?" Um, thanks? 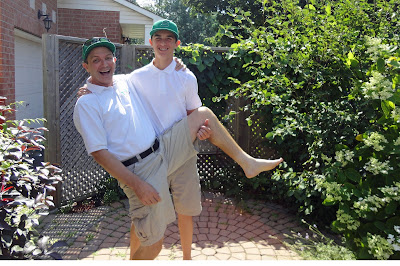 Shan said…
Congratulations to Angus and his team!! Wow that is a lot though! Hope it all ends up being easier than you thought.
July 29, 2013 at 7:27 PM

Nicole said…
This is so exciting! How amazing for Angus! And also - this post really shows how having a kid in any kind of competitive sport, a talented kid, becomes a real family effort. It takes a whole lot of energy and effort I'm sure. Especially for Matt - sounds like he has his hands full!
July 30, 2013 at 6:42 AM

Sasha said…
This is SO COOL. And crazy. And you do a totally awesome job with your long crazy sentences with everyone running around and/or keeping their heads down and/or being confused of conveying the sheer crazy-assedness of it all. And I can't wait to be able to tell people "I knew Angus when...", er, "I saw Angus once sitting at the diningroom table just before...", umm, ok so maybe my biggest claim to fame is that I'm pretty sure I overheard Matt on the phone trying to wrangle accommodations in Glace Bay.

Hannah said…
I am going to get slammed for this but if you knew Glace Bay, this would not surprise you In. The. Least. >:/

If they're staying in university dorms it must be St. FX. Beautiful campus. They'll be very comfortable there.

I'm blibber-blabbing on about logistics because I just don't the words to say how thrilled I am for Angus, and his team, and everything. My own baseball-playing kids, as you know, are just in house league and one is still in t-ball. And even so, I get super-invested in all their successes and failures. To be along for the ride on something like this... it's magic. Enjoy every minute, even when it's costing a fortune and you maybe don't see your kid until Thanksgiving.
July 30, 2013 at 10:49 AM

Pam said…
Awesome! And that is just you for doing all you do to make it possible to have these wonderful life moments for Angus and Matt. You rock! Go Angus!
July 30, 2013 at 5:49 PM

StephLove said…
Congrats to Angus and the team! And because I don't have to bear any of the consequences, I'm going to hope they win.
July 31, 2013 at 4:21 AM

Maggie said…
Angus must be so excited. How thrilling for him and all of the kids on his team!

Oldest played in a soccer tournament this past weekend. He plays keeper. After the first two games, the dads of the other kids on the team joked that they needed to buy me a shirt that said "keeper's mom" because I could not relax or sit still until the games were over and spent the entire time pacing back and forth. It's not even that I wanted Oldest's team to win (although that is nice), it's that I wanted so much for him to play his best game and hold his head up high. This older kid, competitive sport thing is going to wear me out by the time my kids are done.
July 31, 2013 at 11:23 AM

clara said…
Wow! So many emotions all over the place, I can't even imagine. We're just having this slow, boring summer..and you're going to LITTLE LEAGUE FINALS! I feel like Oprah needs to be here! Orrrrr not.

Amazing pictures and great storytelling, Allison. It's going to be fine. Your kid is WAY better than mike tyson. Srsly.
July 31, 2013 at 9:24 PM

Lynn said…
Aw, that is just so amazing! I'm super happy for all of you - hope you enjoy the trip and man, am I ever looking forward to seeing Angus on TV someday and boasting to the kids that I TOTALLY KNOW HIS MOM.
August 4, 2013 at 12:54 PM

Julie said…
I thought he was supposed to throw balls into the dirt! Damn over achiever. :)