In Which we pretend to be Wholesome and Winter-loving

February 04, 2013
Yesterday we had plans to go tubing with two other families at Le Domaine de L'Ange Gardien in Quebec. We'd never been before. Eve was nervous, legitimately, that she would get hurt or be too scared to go on anything. I was nervous - the physical timidity and awkwardness she has comes straight from me, after all - about looking stupid, or hurting my neck or back, or Eve not having a good time. Matt was nervous that he was going to be too cold. Angus, if he was nervous, was probably only nervous about the rest of us embarrassing him in some fashion (did I tell you about when I was driving him to school on a really cold day, and we were stopped at a red light right in front of his bus stop, and there were two girls he knew waiting for the bus in the freezing cold, so I said we should offer them a ride, and he said no it would be weird, but I rolled down the window and asked them anyway, and they refused, and he was mortified? It was awesome).  So anyway, we were collectively a bit of a nervous group heading out. 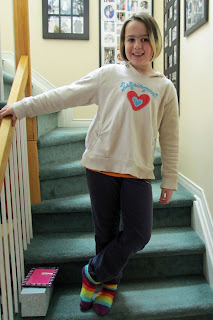 (I know, she hides it well. I'd show you the next picture, which Angus photo-bombed, but I just looked at it and frankly it's a little scarring to be that intimate with your son's nostrils, however momentarily, so I'm not going to)

It was perfect. It was all perfect. The setting is perfect - eight snowy runs, flanked by trees. The weather was perfect - cold enough that the conditions were great, not cold enough to cause any discomfort, just a few perfectly spaced picturesque flakes drifting in the air. The activity is perfect - it's like sliding down a hill on your couch! Eve was perfect - we got to the top of the hill and the other families immediately roped us into a train and we were sliding down the hill before she had time to get scared. She said some of the highest runs were a little scary, but scary in the good way. She had a blast and I was incredibly proud of her for stomping on her fear. Also, the good part of me worrying about her being scared is that it pretty much overrides my opportunity to be scared - I can't very well say go on and try it and I'll be waiting in the lodge when you're done, can I? Plus, her amusement at the fact that, no matter how I started out, I always ended up going down the hill backwards distracted her pretty effectively. 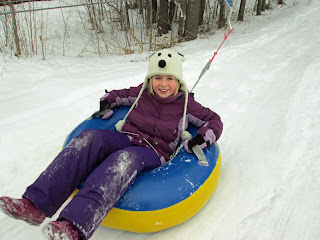 They have a tow rope that pulls you up the hill, which is great for the kids who then don't fall and whine and block the hill for the adults, who mostly walk up the hill because, well, we were buying lunch and the kitchen makes french fries. At one point, we got to the bottom of the hill and were talking to some people and then Matt said 'Where's Eve?' and we looked and she was halfway up the hill, waving at us as if she'd heard him. 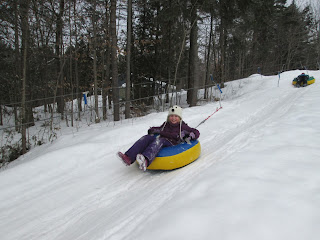 And it's all so small and self-contained that you can let the kids go without worrying about them. At one point we sent them off on a horse-drawn wagon ride and didn't see them for a good twenty minutes. Collette assured me that the guy brings all the kids back eight out of ten times.

When we were climbing up the hill one time, there was a little girl who hadn't taken the tow, and she seemed stuck. I asked her if she wanted me to take her tube for her and held out my hand, which she took with her hand instead, so I shrugged and started walking up with her. From behind me I heard Eve say "duh, Mom, she doesn't understand you. We're in Quebec, remember?" Which seems patently unfair, because when I spoke French to the woman at the admission counter Eve said in a pained voice that she was sure everyone there spoke English and when I spoke French it made her kind of sad. Sigh. 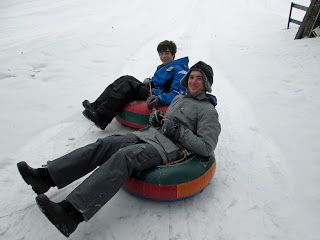 It was such a good day. We're short these days on things we can do as a family where no one is just enduring the experience for the sake of 'family time'. I might be able to watch those commercials that urge you to 'embrace winter' without wanting to put my foot through the tv - for the next couple of days at least. And I agree that it seems stupid to include sliding down a snowy hill on a rubber ring under the column of 'doing things that scare me'. But I'm including it anyway.
Eve of destruction family stuff

Sasha said…
Ugh. I remember "family time". We all hated it, all the time. But this sounds like a riot!

I'm with you on the "winter fun". Somewhere between university and having kids I started skiing, which was mostly fun, but now the thought of snowpants and coats and boots and hats and mitts AND skis is far too intimidating for myself, much less for packing up the kids. So I tell myself we're going to go take in Winterlude and skate on the canal and cross-country ski and all that jazz, then feel guilty for never actually getting off my butt and doing it. I usually enjoy that stuff once I'm out there, but inertia sucks. I'd rather be curled up by the fireplace with a book.
February 4, 2013 at 11:54 AM

Lynn said…
Huh, this actually does look amazing. And this from someone who hates the outside in all seasons!

clara said…
Everyone is smiling! Success! Print and frame those winter-loving photos, quick.
February 4, 2013 at 8:47 PM

StephLove said…
One of the adults in our family actually is winter-loving and I can fake it reasonably well if we haven't had too many snow days. Then I get cranky.

Hannah said…
Man, that looks AWESOME. I would love to do that. We struggle with the "winter family fun" thing, too - I like ice skating but Michael hates it and the kids aren't any good (yet); he likes downhill skiing and I'm scared to try; you can only build so many snowmen and snowball fights always end in tears.

But tubing looks like something we could all enjoy doing.