Guess what? Today didn't suck. Today I went for a walk with Pam and we stopped at Brown's Cleaners to pick up the Sears package that I had left languishing there for many weeks solely because I hate having to face the sourpuss counter lady. Well, not solely - I also forget things a lot. Then we went to the bank because Pam needed a new bank card. I went up to the counter with her and we were chatting with the teller and I wondered briefly if she assumed we were a couple, because once when Eve was at dance I went to Best Buy with Janis, whose daughter was also at dance, to buy a tv for Matt's man cave, and the young man selling it to us obviously thought we were a couple, which was hilarious because this is Janis: 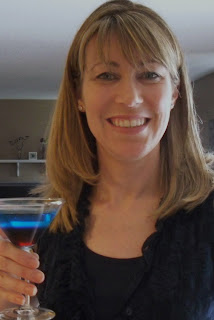 See? WAAAAAAYYYYYY out of my league.

Then we went home and dressed up nice and went out for lunch with Julie, near the Museum of Science and Technology where Julie works. We went to this restaurant, and the dish I had was called Silly Noodle (anyone who spends any significant amount of time with me might think I would have done better to look for a dish called Serious Noodle, or Contemplative Noodle, or Stop With the Incessant Giggling and the Overuse of the Word Whatever Noodle, but whatever). Then Julie told us that beside the McDonald's which is near the Museum is a Lindt Store.

A Lindt Store. A store that ONLY SELLS CHOCOLATE. I tried not to visibly shake with excitement while we were walking in. I got more chocolate to add to the teacher gifts, which I then realized were already chocolate. Oh well. I bought one Lindt champagne truffle because I've never seen one so I figured I should try it (I haven't tried it yet). Pam and I both spent about the same amount (which shall not be revealed here) which the sales guy remarked was good because then we couldn't judge each other. As if.

I came home and did a little work. The kids got home and I helped them practice piano and got dinner started. Then I realized I was still dressed nicely and grumbled at the kids for not noticing. Dudes! You've been home for two hours and I'm STILL WEARING A BRA - get with the compliments already! They were dutiful, if not terribly convincing.

Now we're going to watch The Muppets Take Manhattan. Because that movie last week has created an unquenchable demand for Muppet content. And in this one Kermit wears disguises.

Happy END OF NOVEMBER. Also, let's observe that I didn't swear even ONCE in this post.
happy days

Nicole said…
Good god. A Lindt store? Did they have peppermint truffles? IF SO DID YOU BUY MANY OF THEM????

I love Muppets Take Manhattan. I am unspeakably sad that my kids have zero interest in seeing the new Muppets movie.
December 1, 2011 at 5:20 PM

Julie said…
i don't know who you are nicole, but they have the peppermint truffles and after christmas they are ridiculously marked down. i buy enough to get me through the year. well, let's be honest, they get me through have the year. and then the rest of the year i pine for them.

Anonymous said…
Eat that champagne truffle this minute and then tell me how it tasted. I am intrigued. And hungry.
December 2, 2011 at 9:03 AM

Pam said…
The chocolates were fucking awesome! I finished the bag last night. Guess I have to go back. Yes, she did buy peppermint.
Wish my kids would see the muppet movie too. I think I'll go anyway and talk so much about it tha the kids will wish they went.
Allison and I would make a cute couple, except we'd fight too much over the last chocolate.
December 2, 2011 at 11:43 AM

Wrath Of Mom said…
Janis is very beautiful, but she is not out of your league, Allison. If you wanted Janis, you could have Janis. And Janis would be very lucky to have you because you -- YOU -- are really beautiful and a really great person, with or without a bra. The two of you would make a fuckin' awesome same sex couple.

Ms. G said…
I'm going to try to be thankful that I don't have a Lindt store nearby instead of jealous. Well, my butt will be thankful anyway.

I just back read to find out about the movie. It's good? Excellent! We love the Muppets but the girls were hesitant because as Mid said, "I can't trust anything made after Jim Henson died." I will pass it on.
December 4, 2011 at 8:44 AM

StephLove said…
My daughter is satisfyingly observant when I dress up (because it happens so rarely and she cares about clothes). I went to a 50th birthday party yesterday and she was shocked I was wearing "a dress AND tights."