So I have a strange relationship with numbers...

January 15, 2009
I was working in the school library this morning. I do the basic library stuff -- check books in and out, catalogue new books, fix hurt books, but mostly I shelve. it's sort of tedious and repetitive and back-breaking, especially the lower shelves, but after a while it becomes sort of a Zen exercise.

It's kind of interesting seeing the books that go out and come back on a regular basis (Harry Potter and Geronimo Stilton in fiction, fast vehicles and puppy and kitten books in non-fiction), or putting back one that I haven't seen get any play before (in which case I kind of root for it -- is that weird?).

Oddly, I find the numbers of the Dewey Decimal System taking on resonances, personalities almost. Not just that I don't like the numbers on the bottom shelf, although that's true. For some reason, some numbers are appealing and some are unsavoury. 398.2 is fairy tales -- three shelves of them, it takes up more room than any other number. 001.9 is a couple of UFO and scary story books that look really cheesy, which makes the number seem sort of appropriate -- it's almost nothing. Not to mention how close it is to the Chicken Soup for the Dippy Happy Marshmallow Mermaid Soul (sorry, is my cynicism showing?).

For some reason I really like 551 and 552 -- natural phenomena and geology, respectively. The numbers seem somehow nicely balanced to me (also, I do like rocks). 567, on the other hand, is a horrid quagmire of dinosaur books, and the shelf seems to have some evil force field around it that actually prevents anyone from being able to put the books in correctly. Don't tell Bonnie, but whenever I get these books, I mash them all together, pick a point on the shelf and just jam them all in -- there's no other way, I swear.
photo credit 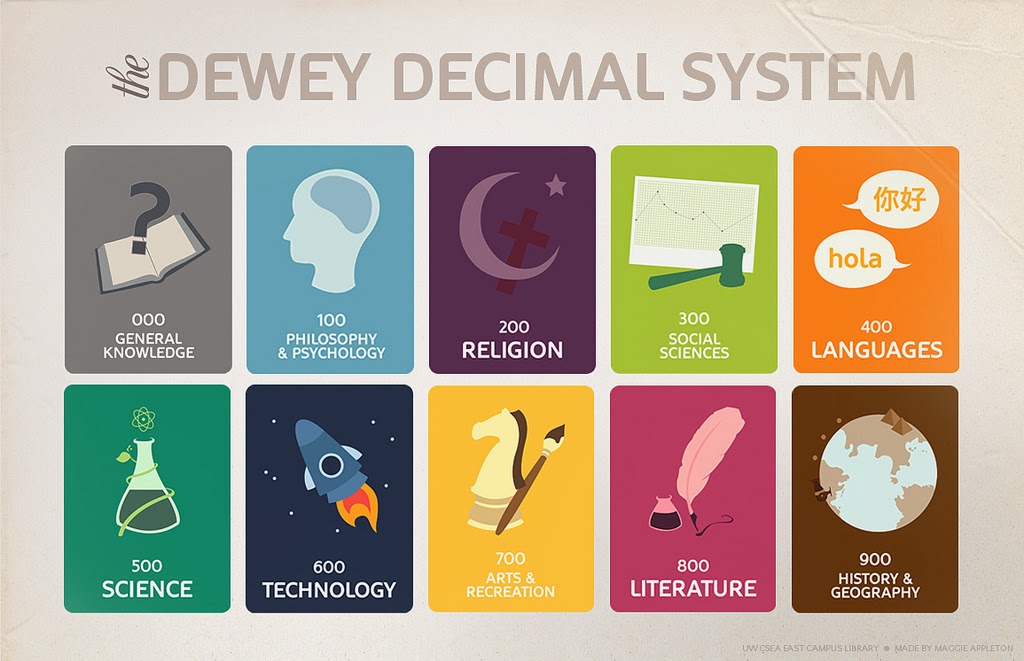 736 through 750 is a series of incredibly skinny or imposingly fat books, about drawing and crafts, which also resist proper ordering, but in a more benign fashion (you know, that flaky artsy vibe -- it's chaotic, but not malicious). 811 is a sort of jolly number which seems utterly appropriate for Shel Silverstein. 597, 8 and 9 are animals in the wild, and they seem to serenely float into the proper place. 636, on the other hand, is pets, and they're much less cooperative. 629.133 is a messy, unwieldy number that shelters a phalanx of flimsy sideways-bound books about airplanes and sports cars, and I find the whole business sort of tiresome. I adore all of the 900s, and I have no idea why.

Today I saw some rare 400s -- they were gleaming new, as if they had never been touched. There seem to be an inordinate number of non-fiction books bearing the letters PAR under the number. I haven't conducted extensive enough research to ascertain whether there are just a disproportionate number of authors whose names start with PAR, or if there's one manic dude out there churning out books on hurricanes, dolphins, backhoes and Van Gogh (he'd be a hit at parties, I guess. Or incredibly pompous and boring. One or the other). There's also a lot of SJO, which makes my brain hurt a little -- no offense to the eastern Europeans, but S and J are two letters that just don't belong together in my book.

I go in at about nine-thirty, then I go get Eve when her SK class finishes at 10:45 and she hangs in the library while I finish. Bonnie lets her put away the picture books, because you only need to know the first letter of the author's last name. I can hear her muttering to herself and singing as she shelves them. I wonder if she's developing her own baby neurosis about the alphabet...(B is awesome! I love B! On the other hand, I really wish L would quit looking at me like that....)
favourites I feel weird wacky/whimsical

Zarah said…
Awesome post. I love the idea of numbers having personalities. And you're certainly not the only one. The Hour had a really cool interview with Daniel Tammet (a savant with Asperger's)and he associated colour / emotion with numbers. I've attached the link to his interview. http://www.cbc.ca/thehour/videos.html?id=999589223 I only saw part of the interview but it made me want to read his book "Embracing the Wide Sky". Maybe we can both read and discuss. Love the blog, Zarah
January 18, 2009 at 10:27 AM