A mind divided cannot stand... or think... or produce dinner for four.

January 14, 2009
I have trouble with transitions. When I say "I", I mean some small centre or formation in my brain, because I, the rational, forebrain, thinking, reasoning part of me, am fine with transitions. I relish them, in fact. I like getting back from a trip and getting reacquainted with my personal space. I like Christmas and summer when things are relaxed and unpredictable and we can do what we want, and I like getting the kids back to school and settling back into the routine afterwards. In theory, anyway. I look forward to it... and then, for no good reason that I can ever ascertain, I implode. It takes a tremendous effort of will to get to the gym, or out of bed. I get a kid to the dentist or the doctor and I feel like I've climbed Everest. At the moment it seems almost inconceivable that February is ever going to get here without this house seeing way too many fish sticks and episodes of Hannah Montana. At least if I'm blogging, I can't be watching TV or eating cookies, right? (not with my full attention, or both hands, anyway). Plus, when I'm depressed, I read more. Huddled joylessly in my chair, like a food addict shovelling down Rocky Road, often increasing my self-loathing, but still....
Lamb: The Gospel According to Biff, Christ's Childhood Pal
by Christopher Moore
LOVED it. I had to read this for book club, and I had some reservations, which I usually do when approaching comic novels. It's a real talent to write a story that is funny without just being silly -- stupid, even. I once went to a lecture by Drew Hayden Taylor, the Native Canadian playwright, and I can't remember if this was his own statement or if he was quoting someone else, but the quote was: "The truest humour comes from pain". This struck me as so true and right. Lamb would have been a very different book if it had been written simply to make fun of Christianity and do some apostle slapstick. Instead, it gently skewers Christianity, and several other world religions, without being disrespectful to the faithful. The novel fills in the 'missing years' in the history of Jesus, from his time as a child to the time just before the Crucifixion. In this time he meets and falls in love with Maggie (Mary of Magdala), sets off on a long journey to find the three wise men who attended his birth and attempt to learn the true meaning of being the son of God, and returns to Galilee, all the while accompanied by his faithful friend, the loyal, steadfast and horny Levi, who is called Biff. 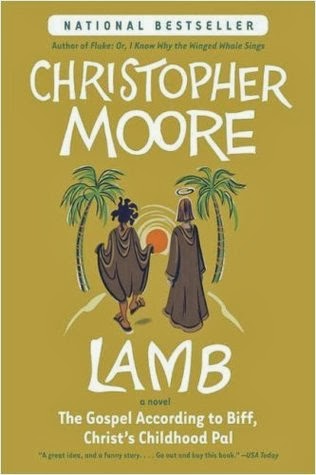 The relationship between Joshua (Jesus is the Greek translation of the Hebrew Yeshua, which is Joshua) and Biff is heartwarming and hilarious -- Biff takes it as his sacred duty to protect Joshua and do whatever it takes to help him realize his destiny. If this means taking a beating from a Roman soldier, he'll take the beating. If it means sleeping with various women in order that he can describe the act of intercourse to Joshua, (who cannot know a woman in the Biblical sense but is understandably curious about the whole business), so be it. Through Joshua and Biff's travels and debates, Moore questions enough of Christianity to make you think, ("Why would the Lord make sin feel good, then condemn man for it?") but the humour flows mainly from the weaknesses in human nature rather than inherent flaws in the religion. The story asks some interesting questions about what it would be like growing up believing your fate was to save mankind, while feeling completely overmatched, ill-equipped and inadequate to the task. Joshua perseveres, in the face of danger, demons and desire. Biblical characters such as Mary Magdala (Maggie, adored by both Biff and Joshua) and John the Baptist are also given thought-provoking treatment here.

The framing device of the novel is Biff in the twentieth century, having been resurrected by the befuddled, tv-addicted angel Raziel, attempting to compose the new gospel (..."he won't let me order pizza until I finish a section, so here goes...").

The loss and alienation of being suddenly alive years out of his time mirror the confusion and loneliness inherent in being the best friend of the Son of God. The distance also allows Biff a more mature perspective on the friendship: "I don't know if now, having lived and died the life of a man, I can write about little-boy love, but remembering it now, it seems the cleanest pain I've known. Love without desire, or conditions, or limits -- a pure and radiant glow in the heart that could make me giddy and glorious all at once. Where does it go?...Perhaps it is lost to us when we become sexual creatures, and no magic can bring it back."

The humour in this book (and I snorted water through my nose more than once while reading it) does largely come from pain: the pain of a small boy who struggles growing up under the weight of the enormous destiny; the pain of family members and loved ones who necessarily take second place to that destiny; and the pain of the friend who loves him, but can only travel with him so far and no further (although there are a fair number of concubines along the way to ease that pain).

Whether you are religious or not, this is a great story, and a fantastic book.