I'm SURE that border is irregular!

January 24, 2009
My mother just forwarded me this email about some woman who drank out of a can of pop without washing it and had a seizure or something and died and it turned out the can had dried rat urine on it, which begs the question.... has my mother freakin' MET me? My husband is AWOL (well, with begrudging leave), it's minus a million out, it's like mounting the goddamned Franklin expedition getting Angus to hockey in the morning, and she wants me to spend the few hours I have to sleep washing cans and obsessing about rat urine. Thanks, Mom. Did I mention that one of the manifestations of my anxiety is massive hypochondria? Every few months I'm absolutely for sure this time dying of something. It sounds funny, which it kind of is, except for that part of the experience where I really believe it. The internet is not a thing the stay-at-home hypochondriac should be allowed access to. Pretty much across the board, you look something up and the symptoms include joint pain, fatigue and having a nose -- I have them all. Except tongue cancer. I heard about tongue cancer and a couple of weeks later I had a weird spot on my tongue and I looked it up and there was no way in the world it could have been tongue cancer.


That was a good day. 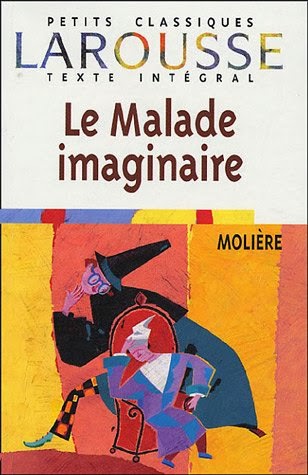 I think the point people miss about hypochondriacs is that they're not just pretending to be sick -- they really think they are sick. My sister (the brilliant pharmacist) told us a story about a doctor she met that dealt with psychosomatically ill people, and the approach was to give them something that would treat the illness if they had it or force them to admit that they didn't actually have it. So one woman said 'no, I believe you that it's all in my head, but I still feel it, so how does that help me?' Take that, smartass doctor.

It's strange how at the time it seems certain and rational, and looking back it seems so pocketful-of-crazy. I spent half of Joseph and the Amazing Technicolor Dreamcoat freaking out about a mole on my shoulder that suddenly seemed scaly and sinister. I couldn't wait to get out of there and go to the walk-in clinic on the way home (well, it was Joseph. I don't think the same thing would have happened at Miss Saigon). Breast self-exams are really just a disaster waiting to happen for me. Then there's MS, Parkinson's, ovarian cancer -- I'll be sitting in bed trying to read and my insides keep going cold thinking of the things that could be desperately wrong with me.

After countless repetitions of this really quite tedious cycle, I've started to recognize what's happening, which helps. A little. My sense of irony allows me to conclude that the likelihood that I will actually turn out to be dying one of these times when I think I'm dying is extremely low. It would totally shut my husband up, though (See? See? I told you I had prostate cancer!!!).

I've also realized that when I go to my doctor (a kind and very very patient woman) I'm not only looking for her to tell me I don't have cancer right now; what I really want is for her to say you're never going to get cancer.

I don't know where else to go from there without getting really cheesy and melodramatic (the real sickness is the fear that's eating up my life! I need to heal the fear!). So if you'll excuse me, after that exhausting moment of insight, I'm going to bed. Right after I google diabetic retinopathy.
hear me whimper

alison said…
I *so* hear you. The Internet is a dangerous place to look things up when we get a twinge or unaccustomed pain. I remember when I was pregnant with Leah (about 5 months) and my leg went numb. I looked up the symptoms and convinced myself that I had MS. I hunted down my OB-GYN *at the hospital* (in my own defence, it was 3 weeks before my wedding and I had pregnancy brain *and* pre-wedding jitters) and cornered her in an exam room where I promptly burst into tears and informed her that I had MS. She just hugged me and said, "Oh honey, you don't have MS. The baby is sitting on a nerve. A couple of weeks after you have the baby, the feeling will come back in your leg." And she was right. But still, I see every mole as a possible melanoma, achy legs as possible rhumitoid arthritis, and that pain under my left shoulder blade as lung cancer. I think sometimes there is such a thing as too much information.
January 25, 2009 at 5:43 PM