That Time I Lost It Over Spoons

Okay, on to that time I freaked out over the Mystery of the Missing Spoons.

The Activity: Making appetizers to take over to my neighbours' place before we go to Bluesfest.

So I have a baguette, a wedge of brie, some sliced green apples, some toasted walnuts, and a jar of honey. I sliced up the baguette, and on each one I put a slice of cheese, a slice of apple, a walnut, and then use one of my tiny adorable spoons to drop a drizzle of honey. I stole the idea from Collette (HI COLLETTE) and they are both aesthetically and gustatorily pleasing. I thought I had pictures, but I can't find one, so here's another one of the appetizers. 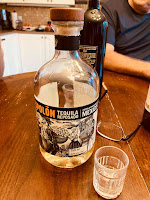 So I finished the first one, set the spoon in the lid of the honey jar on the kitchen island, turned back to the other counter to assemble the next one, and when I turned back the spoon was gone.

This isn't that weird. I am eternally setting things down and forgetting where, and I'm a messy cook - things end up under other things or whatever. But I couldn't find it anywhere.

Okay, well, moving on. I got a new spoon from the drawer and stacked the bread, cheese, apple, walnut, honey drizzle again. Set the spoon in the honey jar lid and turned back to the counter. Assembled next app, reached for the spoon.

I'm seriously freaking out at this point. Like, it's NOWHERE. Collette (HI AGAIN COLLETTE) has this theory that when you lose something or feel like it's not where it was supposed to be, it's a glitch in the matrix or those big monstery things from the Stephen King story The Langoliers getting ahead of themselves. I'm not wholly opposed to this theory, and I felt like I was being seriously fucked with by some kind of trickster force. I stood there indecisively for a moment, trying to work out my next move. Were my tiny adorable spoons gone forever, or would they mysteriously appear back in the drawer? Was I supposed to just keep throwing spoons into the void? Were they demanding a sacrifice?

I got another spoon out, but now I was full-on paranoid. I put the spoon in the jar lid, and turned back to the tray of apps, but then I kept whirling back around as if I might catch some asshole pixie in the act of snaking my spoon. If anyone had come in I would have appeared seriously deranged. The third spoon didn't disappear, and I was about finished the appetizers when Matt came into the kitchen and walked behind the island (I was in front of it). He stopped and squinted and said "Is that a... spoon?"

He was looking at the honey jar. The big, tall, cloudy honey jar.

He looked at my face and said "oh, did you think you were losing your mind?" I said "look again". He looked and said "Oh, is that....TWO spoons?"

It was. It was two spoons, in the honey jar. Which was the obvious answer, really. I guess I was a tiny bit sad that there was no magic involved, but happy not to lose my tiny adorable spoons.

After-publication edit! My neighbour (HI YVONNE) read the post and sent me this picture:

Susan from the Pacific Northwest said…
The wonderful thing about LED light bulbs is that a 100 watt "equivalent" bulb actually only uses 10 watts! So you could definitely use it in your 40W fixture.

Swistle said…
I am so relieved to hear where the spoons were, because that was giving me serious empathetic anxiety. Also: do you know where my pocket knife is? because it is GONE, and I JUST had it.
November 8, 2021 at 5:57 PM

StephLove said…
Many months ago I put 2 leeks on the grocery list and Beth bought 2 leeks. She remembered buying them and I remembered seeing them when I put the groceries away. We were both positive there were 2 leeks. When it came time to cook whatever I wanted them for, there was only 1 leek in the vegetable drawer. The other one was never seen again. It either vanished into the ether or I put one in the vegetable drawer and one somewhere else and it's still there, quite rotten. It's not like either of the kids would have snacked on it.
November 8, 2021 at 6:34 PM

Collette said…
I have this image of you turning back and forth quickly trying to catch the magic in action. It makes me laugh. I thought it would end with Lucy somehow stealing the spoons and licking them clean. She's your pixie.
November 9, 2021 at 4:46 AM

Ernie said…
'Were they demanding a sacrifice?' - Bah ha ha! I'm glad you found the spoons, but I thought for sure they were going to be inside the appetizer. I once lost my daughter's bloomers for under her dancing dress in a hotel the night before an Irish dancing competition. I was sure I'd lost my mind. They'd just been there. The next morning they surfaces, maybe under the ottoman in the hotel room. Anywhere, been there.
November 10, 2021 at 9:08 AM