And Then Angus Got Covid

I spent the afternoon driving around doing errands, looking at pretty fall trees and listening to Blue Rodeo. I spent nearly a year listening almost exclusively to the Hamilton and Waitress soundtracks in the car and generally I regret nothing, but recently I've started feeling like I was cheating on all the other music, so I started letting my phone play a random mix of songs. This is highly entertaining, since we still have a family iTunes account, which means all of my music, all of the music we used to play for the kids, and all of Angus's music are combined. A random selection is apt to feature Ingrid Michaelson, Sara Bareilles, The Wiggles, David Bowie, Juice WRLD and YoungBoy Never Broke Again, leading to text conversations like this: 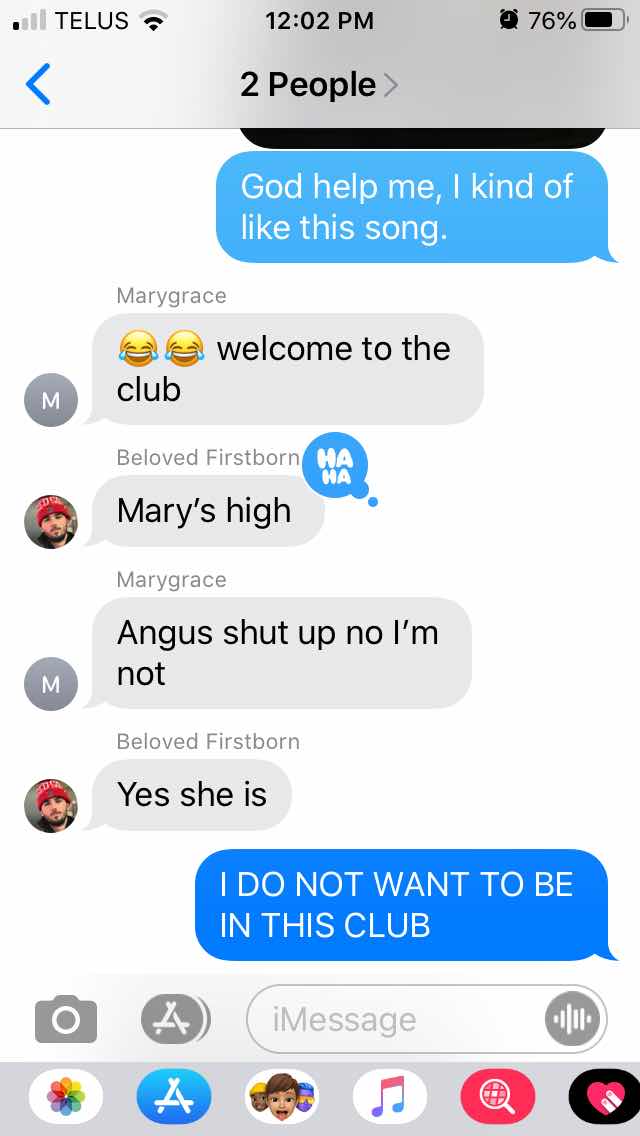 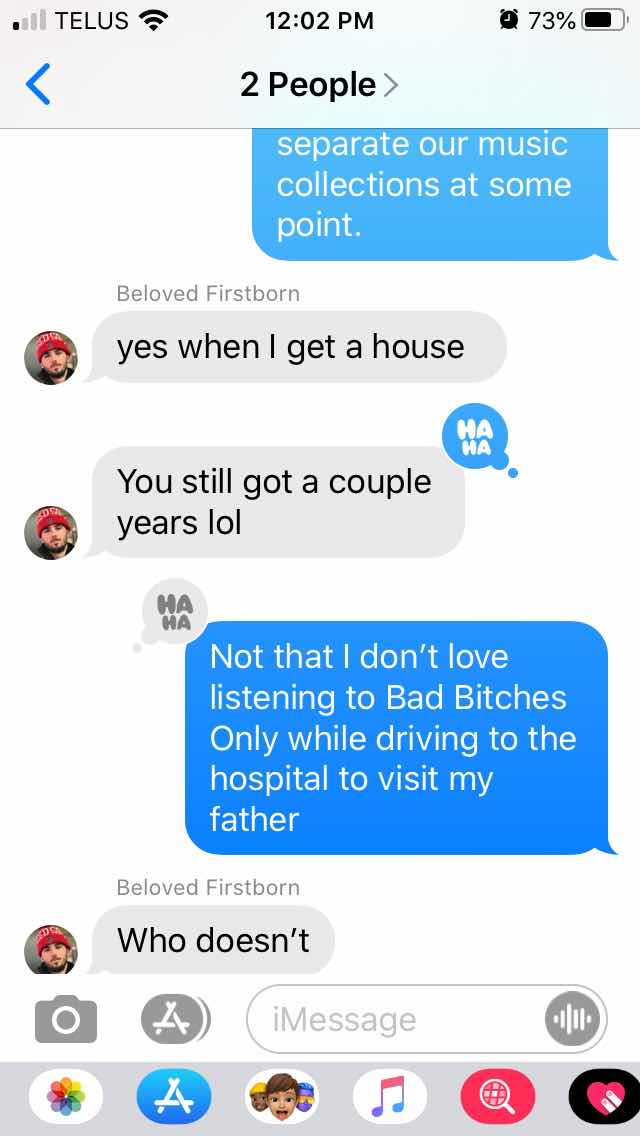 Anyway, Blue Rodeo was good medicine today, particularly "I see a world so tired and scared of living on the edge too long" (also gratifying to see the 'u' in "Rose-Coloured Glasses", fuck you Google Chrome).

So after the nightmare of the Urgent Care ward, my dad was moved into a still-pretty-nightmarish different Covid-safe ward and I couldn't visit for a day and a half until his Covid test came back negative. Then he was moved into a palatial room in Acute Care - spacious, only two beds, two windows with a killer view of the green space. We settled into a nice visit routine - I would come, bring him anything he needed, take away dirty laundry and whatever else, sit for a bit, make his bed if he was in the chair. I found an old ipad and took everything off it except Netflix, and loaded a couple of books onto his Kobo.

I loved the simplicity of his plan for the first couple of days: 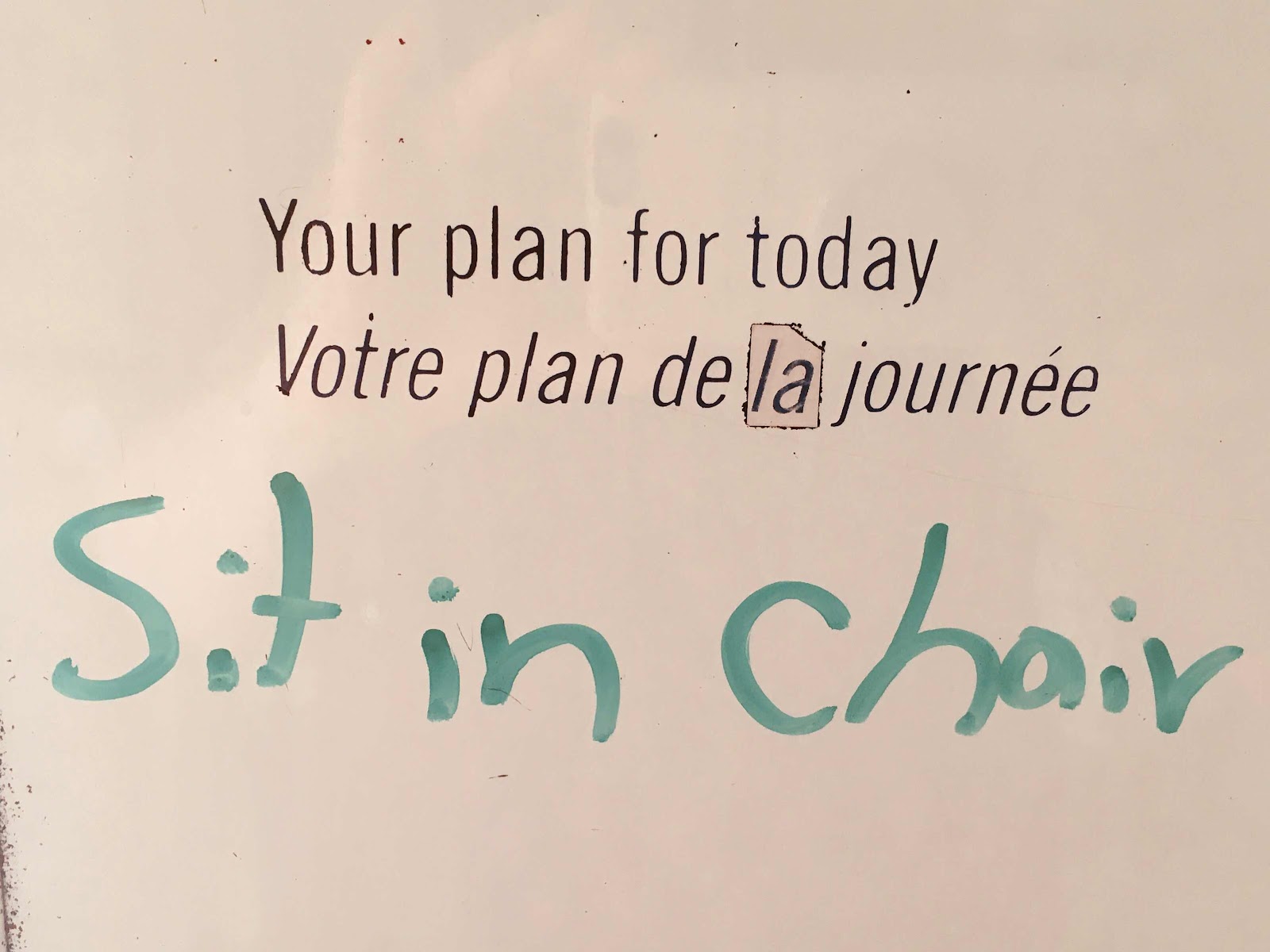 We also had fun trying to emulate the pain scale faces: 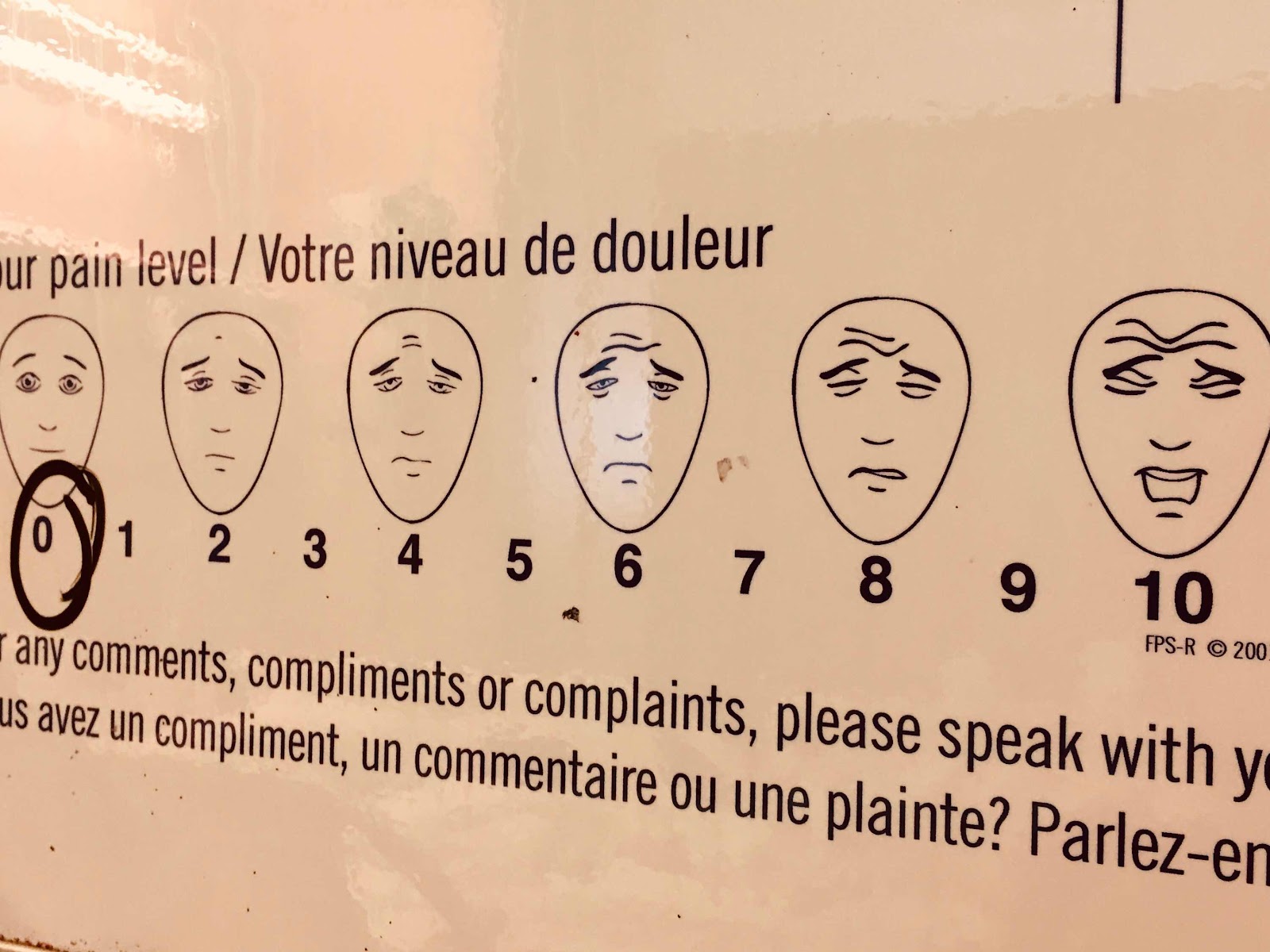 I was mistaken for his wife for the first of several times, which everyone assured me was because he looks so young and not the obverse. I found it pretty funny either way. 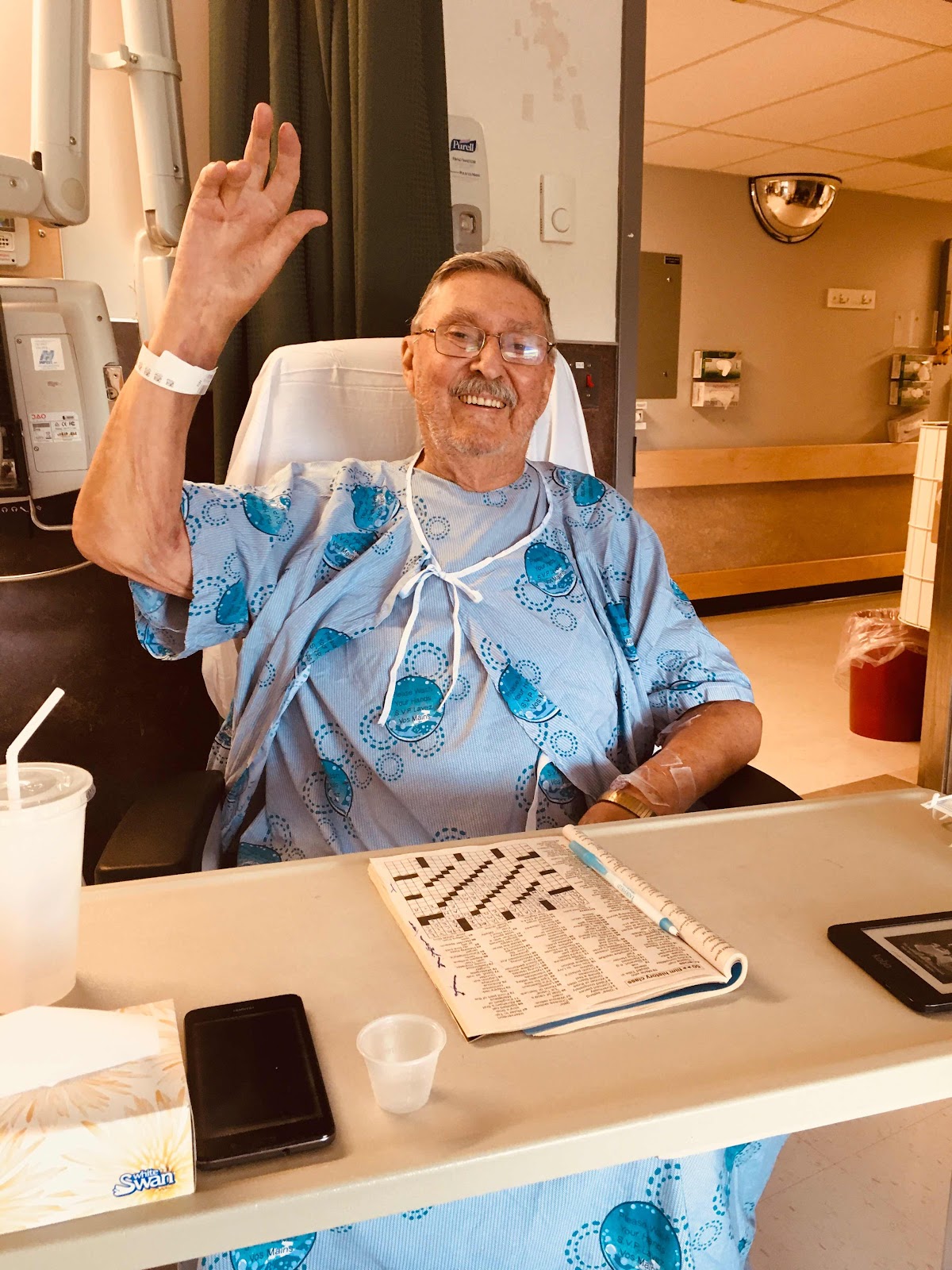 Then he was moved to a less-nice room in less-acute care, which was okay - good, in fact, because it meant he was improving -  but we were getting a little frustrated with the lack of information. I always kind of knew this, but it was made even more clear how you can show up to the actual hospital every day and still leave knowing very little about very much. The nurses are great, but they are overworked and not given all the information. The doctors are overworked and not around much, so unless you happen to time it right, it's pretty hard to get an answer about how things are moving.

The O.T. staff were working pretty hard to convince him that he should go to a rehab centre for a few weeks. I didn't think this was necessarily a bad idea, I just knew he wasn't going to go, no matter what they said. Also, they said it could take a month off his recovery, which didn't seem like a great return for how much I thought it would impact his mental state. We were all getting the impression that they thought we were rushing to get him home for our own convenience, which, I mean, they didn't know us, so we weren't offended, just frustrated.

We finally realized that trying to be kind and unbothersome was getting us nowhere, so we (and by 'we' I mean 'Matt' who did all the hospital telephone liaising - did I betray my gender, or just leverage patriarchal structures, or a mix of both? Whatever, it worked) adopted a slightly sterner tone. We also got some help from a friend who's an OT and got mobility aids in place in the bathroom and spare bedroom.

So, after almost two full weeks in the hospital, we busted him out on his 80th birthday: 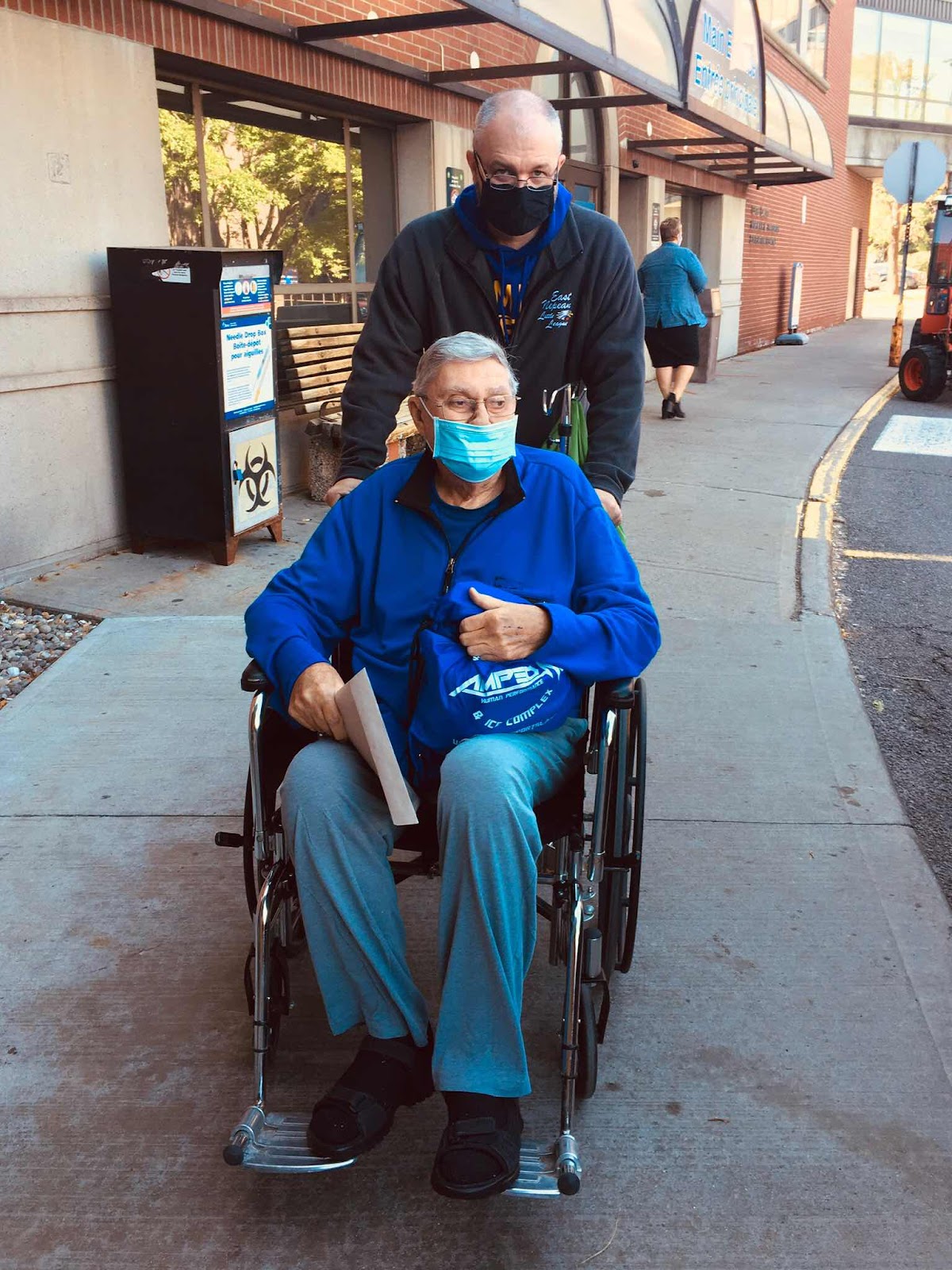 Getting him up the driveway was still a bit of an ordeal, but nothing like doing it at three a.m., with no walker, while he was bleeding internally. 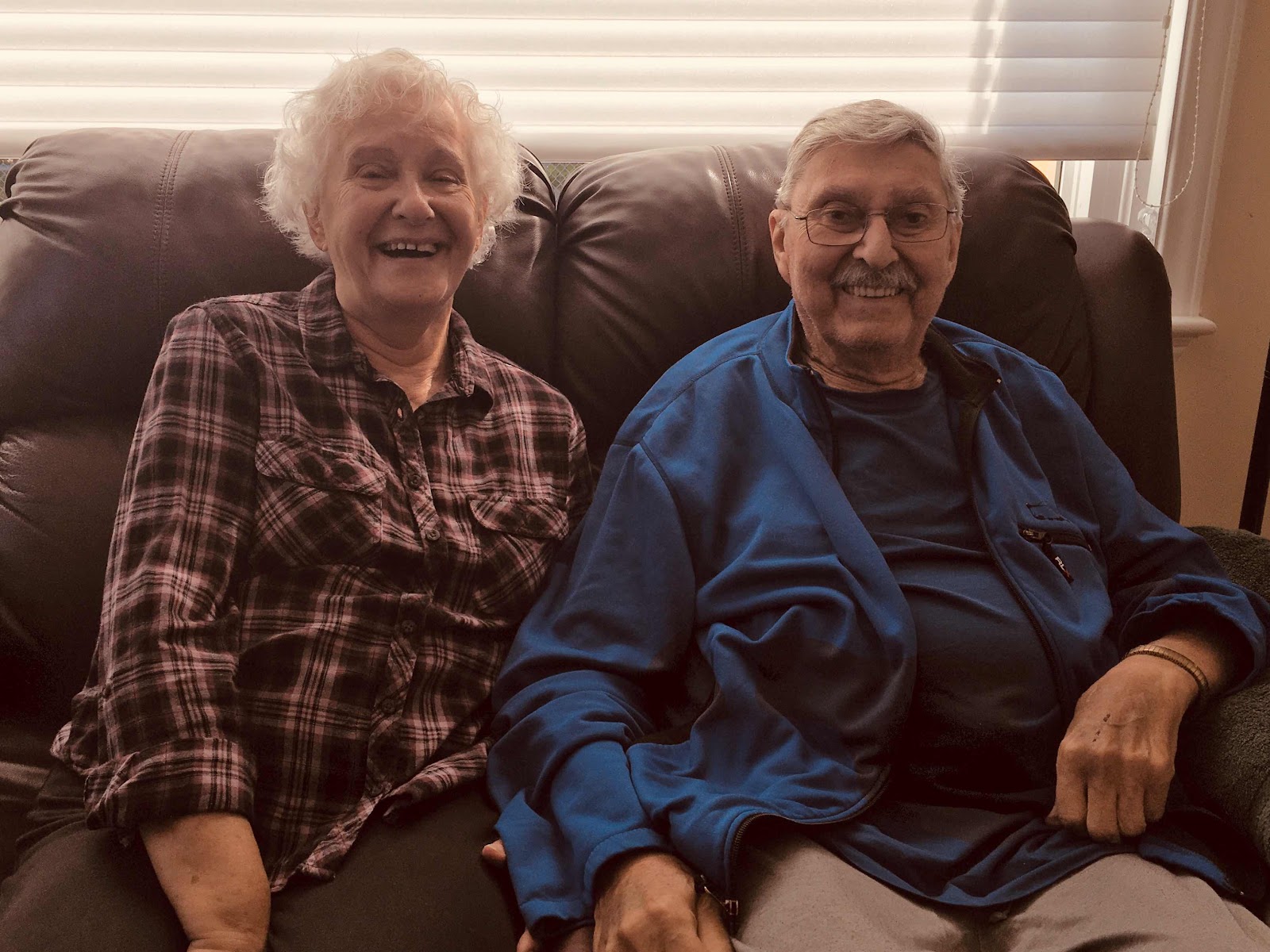 We parked him on the couch on the main floor for the day and came back to help him upstairs after dinner. He's been home for two weeks now and he's doing amazingly well - he's done the stairs by himself both yesterday and today. I actually panic a bit thinking about how lucky it probably was that the stomach bleed manifested itself so violently when it did, because if it hadn't he would likely still be feeling dreadful and we would assume it was just because of the fall. This kind of bleed is often very slow too, so who knows how long it's been affecting him. He's eating more than he has in months.

So just as this was winding down, Angus's girlfriend's suitemate at school tested positive for Covid. Angus and Mary both got tested and found out they were positive the same day I took Eve to get tested here because she had a slight fever. They were both pretty shaken, but asymptomatic except for loss of smell and taste - fully for Mary, partially for Angus. They went to her family's trailer which is at a lake halfway between their college and Mary's parents. Her mother was delivering food and they had internet so they could be online doing coursework. Once he got there he said he realized the world wasn't ending and it wasn't the worst spot to hunker down and work (he's in third year biochemistry, which was always going to be tough, and obviously this bullshit on top of everything is not helpful).

Anyway, between Mary's parents taking care of those kids, and our friends checking on us and bringing us groceries and apple crisp and flowers while we were isolating, it would have been sheer self-indulgent drama-seeking to freak out too much. Eve tested negative. Angus and Mary were released by the New York board of health on Tuesday - he went golfing, she went for a smoothie bowl. Things are still uncertain, of course (when are they not?), and the next crisis is probably not far off. For today I'll keep my rose-coloured glasses on.

D said…
Oh! How is it that you are still able to form complete sentences? Yay! for Dad's improvement and yay? for Angus' attitude, but jeez, c'mon universe, cut a girl a break. Sending good thoughts from far far away.
October 7, 2020 at 5:08 PM

StephLove said…
Wow, that's a lot. I'm glad your Dad's doing better and Angus & Mary are not feeling too sick. We just found out that Beth's brother and his wife have it.
October 8, 2020 at 6:12 AM

Lynn said…
OMG, everything always DOES happen at once, doesn't it? That is madness!! Glad to hear Angus and his girlfriend are doing okay, sounds like it wasn't too hard on them, which is good.

Ernie said…
I completely believe you when you say that you woke up unsure of which thing to worry about. That was a SHIT storm of stuff.

Ed had corona 10 days after getting to school. Never had a single symptom. Glad Angus is feeling good. Ed kept a positive attitude too and used the quarantine time wisely.

You're dad DOES look young for 80. Happy birthday to him. What a relief thst it worked out. I laughed that you feared you let your gender down by having Matt address the hospital staff. I don't think that is the case.

Busy Bee Suz said…
Holy Shit! Too much at once, too much at once!!
I am so happy to see your (extremely young-looking) father is home and doing well. What an ordeal.
Good news that the kids are well now and were not in more dire health, considering.
Be well, my friend. Praying this is the end of the shit show for you and your family.
October 10, 2020 at 8:47 AM