So my dad had a good night on the couch, and we got him a walker and got him upstairs the next day. Then our friend Chris came - he was the best man at our wedding and we hadn't seen him for a couple of years. We had a great night, had several drinks, went to bed with our cellphones off, and in the morning realized my mom had called at 3 a.m. because my dad was vomiting blood. We have a landline, and she knows that, but for whatever reason she didn't think to call it, and honestly it was probably for the best because she called the ambulance and there wasn't much we could have done at that point anyway.

So we waited again - we all walked over to my mom's and picked plums, actually, because they have a plum tree that was overloaded and it was a simple thing that we could get done while waiting -  and eventually they called and said I could go in, but because he had gastro symptoms the Covid protocol had been tripped, so I would have to wear full PPE to be with him. Which was fine, and it was good that they told me that, because when I got there and was directed where to go, he was in a room with the curtain open and there was no one around, so if I hadn't known I would have walked right in obliviously.

I put on a gown, and gloves, and a face shield over my mask. I was worried that he wouldn't recognize me, but when I walked in he woke up from a doze and smiled at me and I gave him his glasses and the other stuff I'd brought. He was thirsty but was due for an endoscopy so he couldn't drink, but a nurse gave me some ice chips for him. The PPE was hideous - hot, itchy, cumbersome - and I had an overwhelming wave of gratitude for the health care workers that have to wear it for long hours, and an overwhelming wave of rage towards the morons whining about wearing a piece of cloth over their face to go grocery shopping.

The biggest challenge was helping him stand up so he could pee - he really felt like he needed to, and couldn't do it lying down. I was less worried about the embarrassment - we're both adults, shit needs doing, we do it - but it was painful getting him up and back down and he was gray with pain and it was all horrible, but it was done and that was good. Then he said "have you been here long?" and I said "what? No, I walked right in ", and he said "no, I mean employed here long" and I was like "DUDE, I'M YOUR DAUGHTER". He burst out laughing and said he thought Matt had just dropped stuff off. I said "Did you not wonder why I was hanging around so long? And why I suck so bad at all the nursing stuff?" He said "I was about to say 'my daughter is built just like you' and I said "DO NOT UNDER ANY CIRCUMSTANCES SAY THAT EVER". A little while later I was trying to get his oxygen sat thing back on his finger and it kept beeping and he said "it must be almost midnight" and I was like "Dad, it's almost seven, are you losing it?" and then realized he meant because the beeping sounded like a clock chiming and it was up to twelve.

Thankfully, the endoscopy nurses showed up with the machine, and then the (insanely hot) doctor, and they did the endoscopy and then he came out to talk to me (took his mask off, which I guess was not totally kosher but maybe he sensed that I just needed a little pick-me-up) and said it was a bleeding ulcer in his stomach that was now cauterized, and he did great.

They had given him some super-good drugs - after they took the tube out and asked him how he felt I heard him yell "I feel AMAZING!", so I waited until he was asleep and then went home. Matt had barbecued, and we sat with Chris outside until it got dark and all our twinkly solar lights came on and the weather was perfect, and we listened to the ball game. 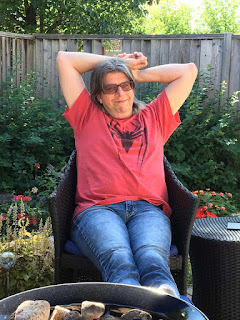 It felt like the day had been four days long, but on the whole it all trended to the positive. Both things that happened to him could have turned out to be much worse, so there was that to be grateful for.

Ernie said…
Well, that was scary. Hilarious that he did not recognize you. I can imagine that it felt longer than it actually was. Hope good health is the norm for all of you now.
October 2, 2020 at 5:45 AM

Marilyn (A Lot of Loves) said…
NEVER SAY THAT!!! That made me chuckle because...truth. Man this just sounds exhausting. And I'm sorry for that but glad it's trending up.
October 2, 2020 at 9:54 AM

Busy Bee Suz said…
That was a long, long day. I'm so glad you were able to be there for your Dad even if you're a terrible nurse. Wait, you didn't say that, I'm just guessing. Big hugs to you and your family; this is a lot. I hope your Dad is doing well.
October 8, 2020 at 5:29 PM