June 04, 2014
Full disclosure: I know Matt Murphy. I've known Matt Murphy since he was about ten, when I started hanging out with his sister Patti, one of my dearest friends. He was a writer then, too; his stories were most often accompanied by elaborate drawings of flying machines spewing bullets and dismembered, blood-jetting carcasses. This work, therefore, isn't a huge departure, although it adds a little more gravitas to the carnage. I was a fan of the horror genre as well, so we would discuss the relative merits of John Saul and Stephen King, until I realized we were talking about books that he had gazed adoringly on in the bookstore but wasn't actually allowed to read yet. 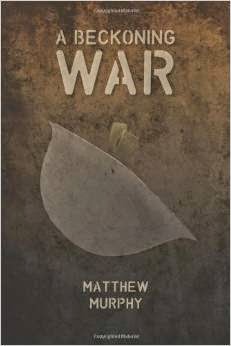 I don't read a lot of war fiction. I don't have anything in particular against it, it just doesn't call to me the way young adult apocalyptic dystopias or adult mysteries do. I have read The Wars by Timothy Findley. While this book is not quite The Wars, considering that this is a first novel, I was fairly impressed. I like that the protagonist, Captain Jim McFarlane, is a sort of classic everyman; he is not a hero, not without flaws - in fact, he's pretty up front about the fact that he looks on the war as an opportunity to shake the boredom of his job and gain some status in his family. His relationship with his wife isn't a Grand Passion, she isn't a perfect ideal of a woman, and he goes to war over her objections. This makes the book read more like a legitimate exploration of a soldier's experience than a Hollywood rendering.

That said, A Beckoning War headed Kirkus Review's list of 12 Most Cinematic Indie Books of 2014 (so far). Indeed, one of the first things I noticed was the almost palpable rhythm of the book, the contrast between the quiet passages detailing McFarlane's increasingly tormented musings and the sections vividly describing the frenzied bedlam of battle. There is ample demonstration of the fact that war is never one thing - there is boredom, and terror, and extreme bodily discomfort, and camaraderie and humour, and, with McFarlane, the questioning of whether he will emerge from this experience in any way intact.

The humour emerges in McFarlane's interactions with his superior officers: at one point, McFarlane offers to share his whiskey with Major Gordon, the battalion's second in command, who has just rather frostily instructed McFarlane to stop complaining about being understaffed and overstretched. Gordon, a Calvinist teetotaller, "says, with a trace of disdain, 'I'd sooner take one in the arm'. 'I've already done that,' retorts Jim, feeling the knotted dent of his healed arm wound from the Liri Valley battle, 'and I'll tell you, I prefer booze, thank you very much'". There is also an enjoyably raucous dinnertime conversation that includes a play on words merging "veni, vidi, vici" with V.D. This contrasts sharply with a chilling moment where McFarlane has an extended conversation over breakfast with three friends, then says something to a confused Lieutenant and realizes he's been talking with two dead men and one who's been invalided out.

There were times when I read a passage and thought, damn, Murphy's developed some writing chops: "the rains having extinguished the last of the fires of the great battle and left in their wake a match-stink of old burning, the scorched and bitter essence of incendiary decay"; "A slight wave of dizziness washes over him, and the wound in his arm throbs in cutaneous remembrance.” There were other times (I feel I can be honest about this, because he's a published author, and he used to harass me when I was sleeping hungover on his living-room couch in the morning) when I thought, "NO, MATTHEW, NO". For instance, "“He can hear her voice through the medium of her pen, through tonal vibrations of squiggles of ink”. Squiggles of ink do not vibrate tonally, Matt, not with all the poetic license in the world. And this: “From his pocket he produced a packet of Wrigley’s gum, unwrapping the foil covering of a piece, unleashing a cool wintry zing of peppermint as he did so, and popped the pliable rectangular stick of gum into his mouth.” Unless he uses the gum to save the world, MacGyver-like, within the next few pages, this reads more like a product placement than a descriptive detail. But I quibble.

Truthfully, I am pleased, admiring and a tiny bit envious of my friend's little brother's accomplishment. Way to go, Matt.

StephLove said…
My birthday before last I asked for three books by people I know (two mysteries and a volume of poetry) and it was so fun reading their books and knowing Kelli/Kathy/Virginia made this, even though none of them were close friends. I did live with one in a group house for a year, almost 25 years ago...
June 5, 2014 at 4:42 AM

Nicole said…
I love when someone I know publishes a book. I regularly carry the book around and casually mention that I know that person :)
June 6, 2014 at 2:44 PM