I've Fallen and I Still Can't Really Get Up

February 20, 2014
We're a mixed-bag of viruses over here. Eve has been stuffy and her eyes "are pretending to be waterfalls", Angus has the voice of one of Hell's lesser demons. He went to school this morning, and I picked him up at noon for an orthodontist appointment - when the receptionist heard him talk she suggested I not bring him back. I had a sore throat and bad sinuses on Tuesday morning, which suddenly morphed into the Barfing Plague on Tuesday afternoon. And my husband has somehow been dodging among the large-droplet-contagion without getting wet so far. He did have to put my socks on this morning so I could get Angus to the orthodontist, since I wrenched my back muscles so badly in the process of turning my gastrointestinal system inside-out that I could hardly move. Turns out it's almost as hard to put on someone else's socks as it is to put on someone else's glasses (if you've tried, you'll know what I mean). "What the hell are you doing? You can't just bunch them around my ankles, I'll never fit them in my boots. Okay, DON'T PULL THEM UP SO FAR, you're strangling my feet! Don't you WEAR socks? You SUCK at this!"

Yes, I am always exactly that gracious a patient. 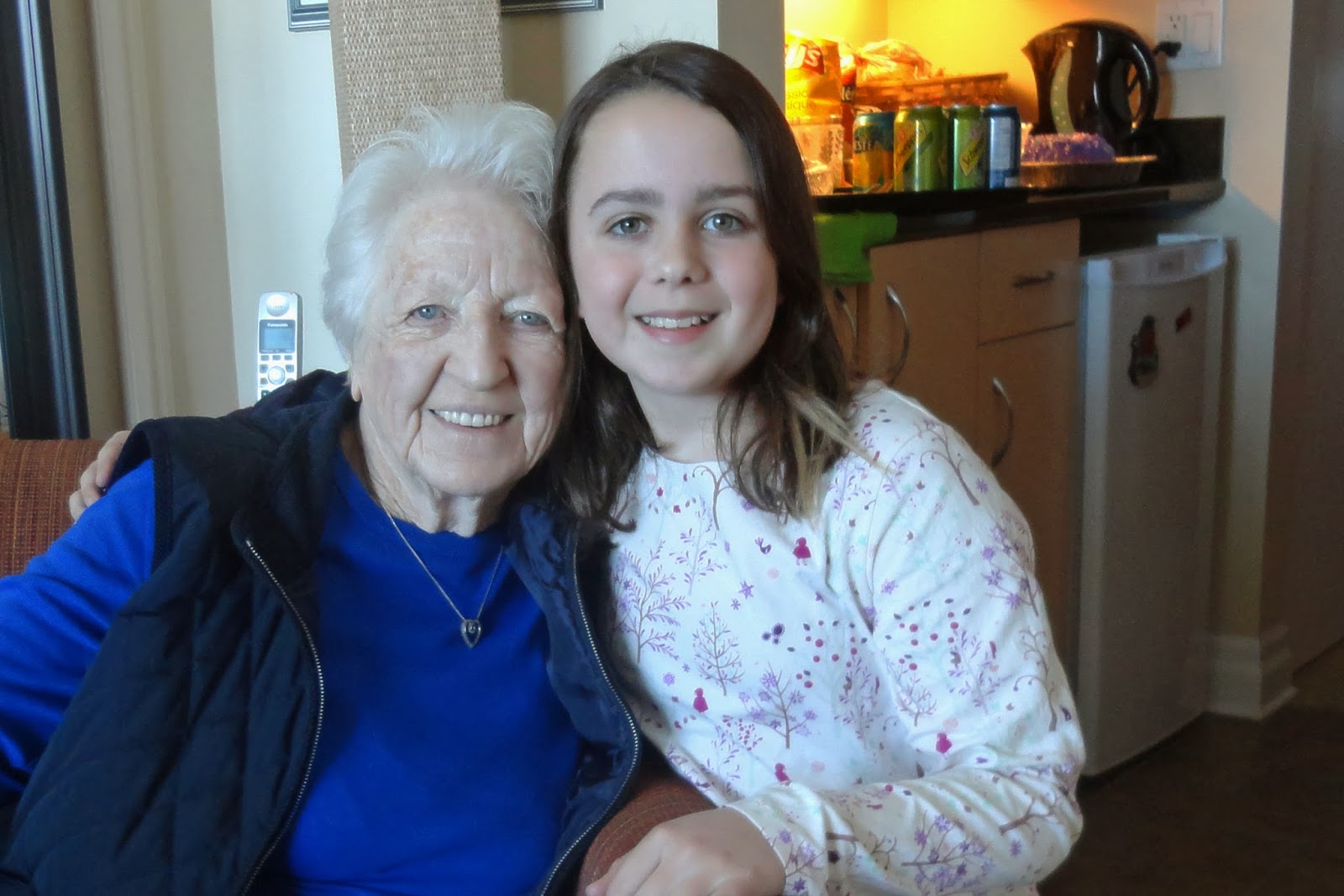 As a result of all the germs and fatigue and shit, I haven't been able to get out to the CPAP place to get replacement filters for my machine, I haven't been able to feed my children and I haven't written anything OR read anything all week. All I've done is watch multiple, out-of-order episodes of Bones on Netflix, while undergoing this weird phenomenon that often takes place when I'm sick, whereby I develop acute feelings of loyalty and affection for a particular show that got me through some rough hours. "I have REALLY been undervaluing this show - the subtlety and lyricism! The gentle humour! The rendering of existential despair as it pertains to a traditional humanist value system! And wow, David Boreanaz has really maintained an admirable set of abs to this point in the series." I'm finding it a little hard to move on. 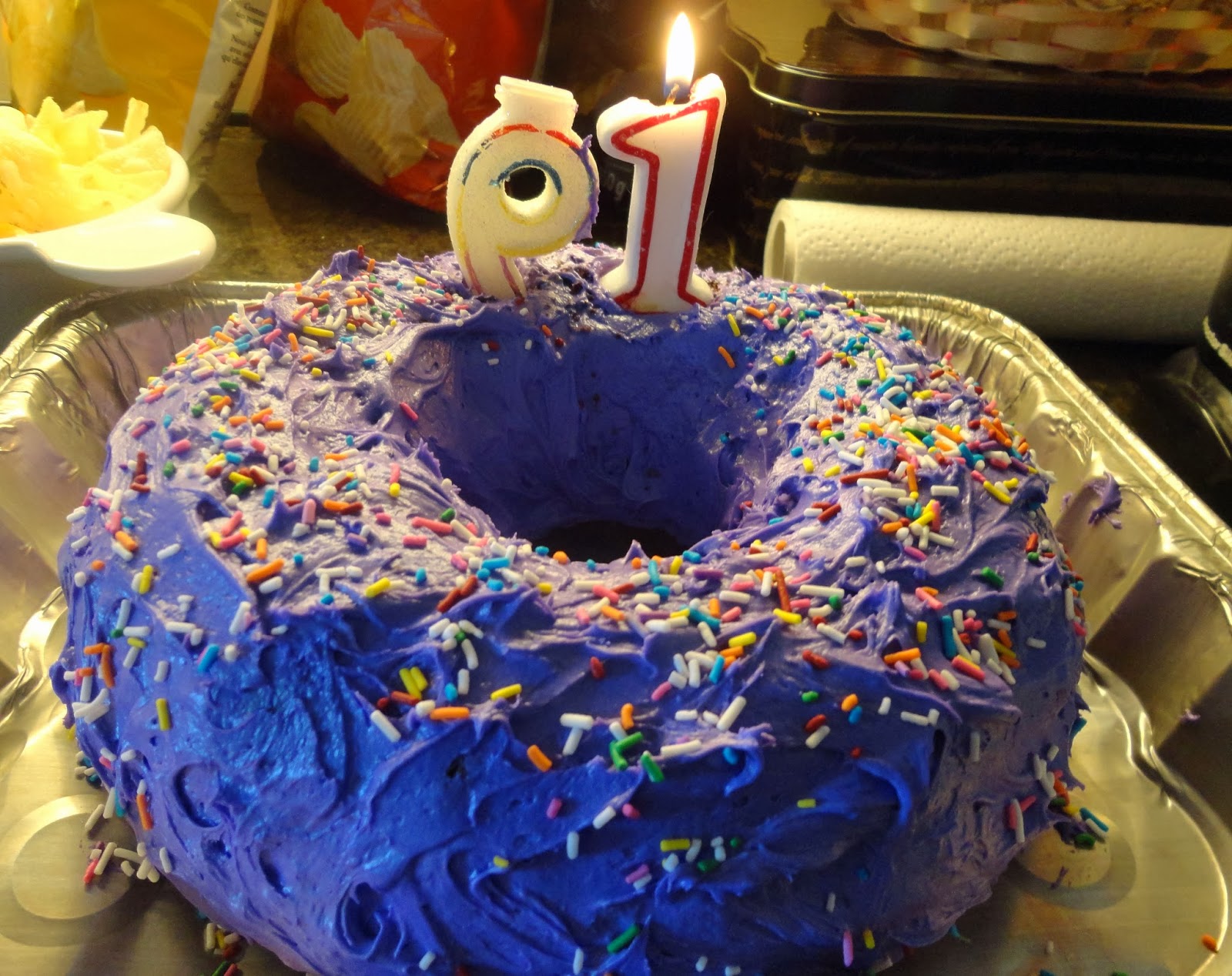 While I regain my strength, have a few pictures of Eve celebrating her 11th birthday and Matt's Nana's 91st (I baked the cake but forgot to buy candles, and I had a one but not a nine, so I had to turn a six upside-down). Eve was born one week before Nana's eightieth birthday, so we've always been able to figure out easily how old Nana is (Eve Plus Eighty.) 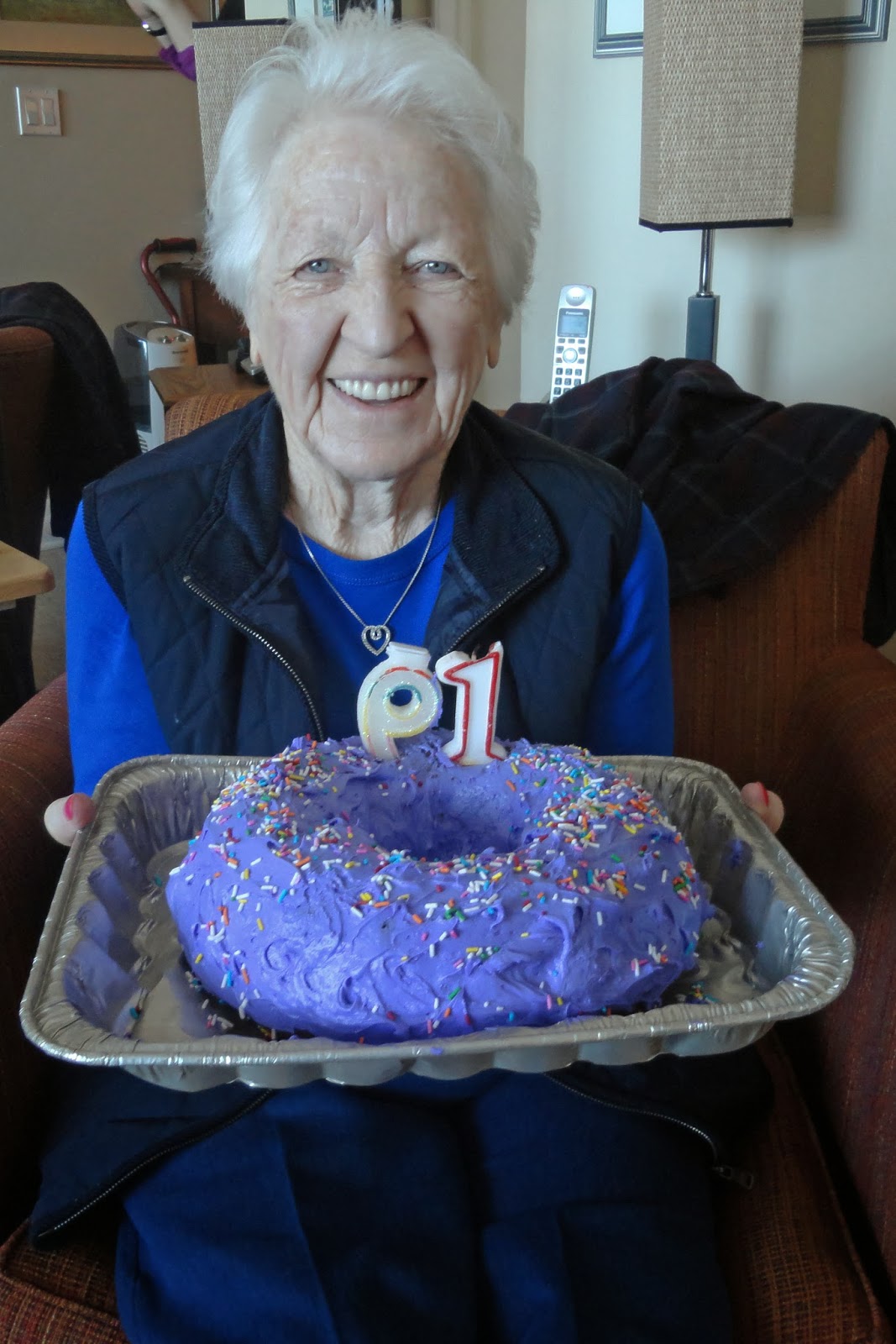 She has a cousin that lived to 98, and she figures she can top that.

I vote yes.
Eve of destruction family stuff happy days love you even when i want to smash your face in

StephLove said…
I'm sorry so you are feeling so poorly.

Happy Birthday to Eve and your Nana-In-Law. She looks great for 91. My favorite in-law is an aunt of Beth's who's in her mid-seventies. I would love to have her around until her nineties.
February 21, 2014 at 4:46 AM

StephLove said…
I'm sorry so you are feeling so poorly.

Happy Birthday to Eve and your Nana-In-Law. She looks great for 91. My favorite in-law is an aunt of Beth's who's in her mid-seventies. I would love to have her around until her nineties.
February 21, 2014 at 4:46 AM

Lynn said…
Ugh, we've had a run of plagues here too - hope you are all feeling better soon.

Sorry about socks: when our oldest was born, we had a rule - whoever was holding the baby could ask the other parent for whatever they needed. A glass of water, a burp cloth, a snack, whatever. My husband used to get very hot holding the baby so he'd scooch off his socks, then later he'd feel cold and he'd ask me to put them back on.

I tried once, then after that, new rule: person holding the baby can ask for anything they need EXCEPT SOCK PUTTING ON, because it's INSANE.

A few weeks ago he convinced our youngest to help him put his socks on and was triumphant in her greater love. I did not feel badly about it at all.
February 21, 2014 at 5:12 AM

Sasha said…
Ok, between you and Lynn, I have this absurd urge to try and put DH's socks on, just to see what all the fuss is about. Is it that much harder than putting on little kids socks? Because my experience is still pretty fresh in that department.
February 21, 2014 at 6:56 AM

Sasha said…
Ok, between you and Lynn, I have this absurd urge to try and put DH's socks on, just to see what all the fuss is about. Is it that much harder than putting on little kids socks? Because my experience is still pretty fresh in that department.
February 21, 2014 at 6:56 AM

Nicole said…
Feel better! That cake is really pretty. I like the purple!

Kim said…
I have never had to put anyone else's socks on, but this has me remembering how infuriated my mom would get during the process. She would always end up being a little rough and now I know it's because it is kind of like playing Operation but with feet.

I am reeling at how lovely Matt's Nana looks at 91. (FIL turns 90 this year and is about a thousand times more grizzled, and he is 50% of my reference pool to how people look in their nineties.) And Eve of course looks just as lovely.
March 19, 2014 at 8:08 PM