Okay, I was sort of joking about exploiting Eve for NaBloPoMo, but she just came down and gave me some really great material, so I'm going to ride this wave as long as I can.

It's her last quadmester week of grade 12 Biology, which has been extremely challenging and fast-moving. I have personally learned how the PCR Covid test works (sent her Bio teacher a Starbucks gift card for that one), a bunch of stuff about DNA and RNA, and there was an impassioned speech about how she answered the question on why cyanide is poisonous, which I was with until she said "and then... you know what entropy is?" and Matt said "WHAT?" and she said "yes - the tendency of the universe toward disorder" and he expressed skepticism but she swears she sold it (I just checked - she got full marks and no giant question marks or referrals to the school psychologist, so I guess we're good).

This week they have to learn, apparently, every single hormone. "There are SIX HORMONES IN THE PITUITARY GLAND ALONE. Okay, in fairness that's the most for any gland, I led with that to be dramatic". The lesson today was very difficult - "we're supposed to suddenly know the ENTIRE MENSTRUAL CYCLE" - and when she had her twenty minute break she came down to make lunch and was going to make a salami sandwich with some Miss Vicki's chips and she put her bread in the toaster and got the chips out and then there was NO SALAMI, so she melted cheese on her toast "like a three-year-old" and it was toasted for a sandwich so it wasn't even really toast, and the avocado was a little watery and when she looked for a paper towel to mop it up a little we were ALSO out of paper towels" (she is not genuinely complaining here, she is making fun of herself and her lunch meltodown, to be clear), and then she went upstairs and there was only two minutes left in the break and she was facing the entire menstrual cycle and everything was terrible. 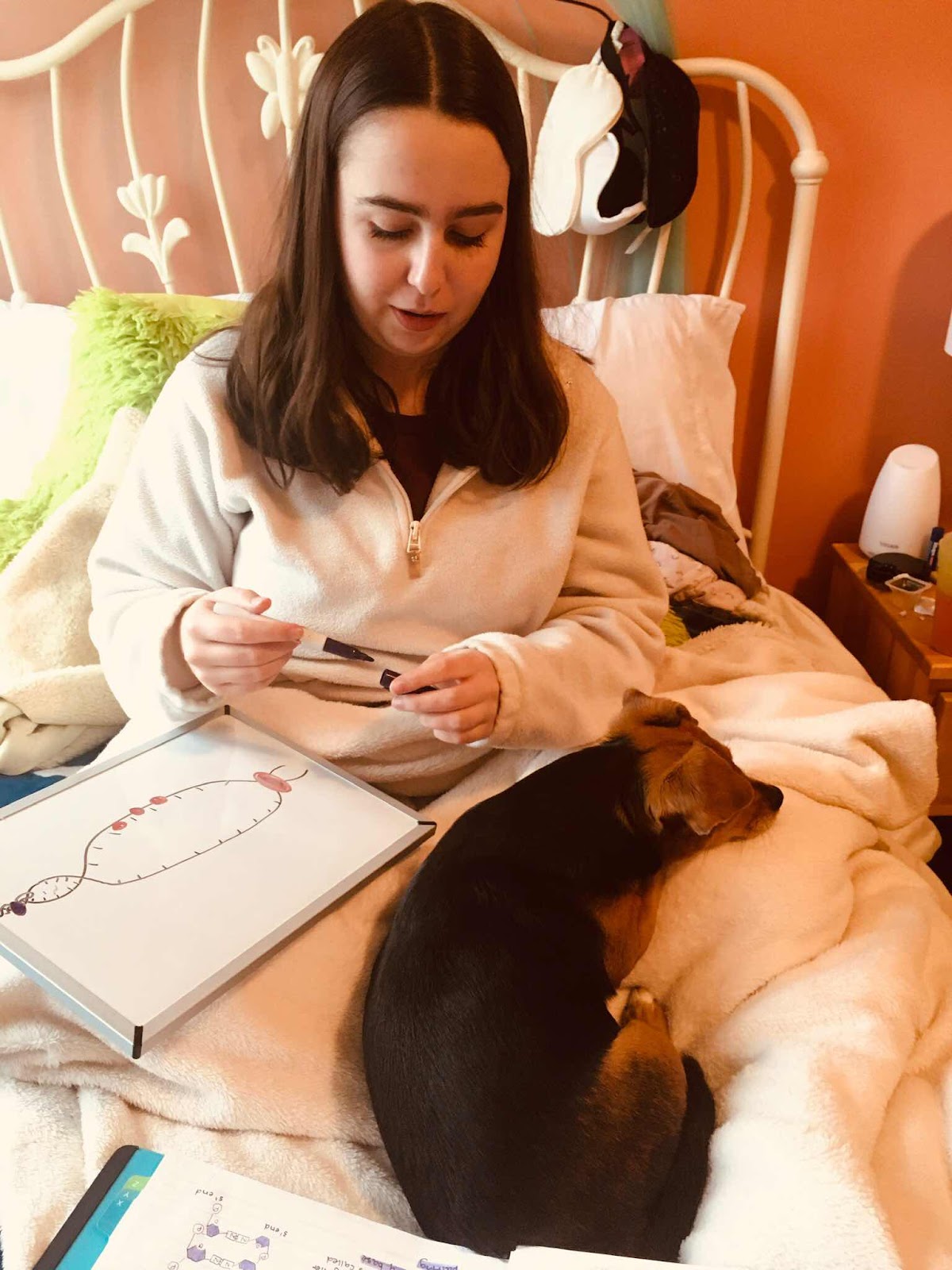 Then she brought down a list of brain stuff (I am at the end of my ability to sound remotely knowledgeable about all this) to illustrate how Game-of-Thrones-ish it sounded. "Axon. Dendrite (I knew that one). Nodes of Ranvier" - I mean, she's not wrong - "We shall convene at the Nodes of Ranvier before the battle". Then she mentioned myelin sheath, which I do kind of know about and find interesting. THEN she said they did a Cahoot for brain nerves and Chloe ALMOST beat her. I assured her that there are worse reasons to do well in Biology than spite.

Last night I started cleaning out the dresser that lives by the entrance preparatory to moving everything before I paint. This had me questioning all my life choices. I'm not going to talk about the election as much this time - four years ago I was also doing NaBloPoMo and I felt silly talking about anything else with this giant thing hanging over all our heads, but there's really nothing I can do, so I'm going to talk about stupid stuff anyway. I wish my son wasn't over the border, but if I brought home everyone from the States that I love and am worried about my house would be standing room only. So let's focus on what we can.

(Getting a higher Biology mark than Chloe and making sure she finds out about it, obv.)

Lynn said…
Okay, there is a lot to unpack here but I just want to focus for a moment on the fact that you have a dresser in your front foyer. YES. GENIUS. I have been dithering for ages what to do with the weird random piles of masks we now have all over the entrance, plus there are soon to be mitts and hats and scarves and who knows what, and I was looking at baskets? Or shelves? Or hooks?

Marilyn (A Lot of Loves) said…
Biology 12 got a lot harder since I took it. I was reading along and nodding my head and then I reached the end and realized I have no recollection of ever learning any of that stuff. At all.

Also, is melting cheese on toast not cool? What about melting it on triscuits? Cause I do that weekly.
November 3, 2020 at 12:59 PM

Ernie said…
You lost me at 'quadmester week of grade 12 Biology' - what in all kinds of available torture methods is a quadmester? Really, if you hadn't pointed out that you were (rapidly) moving on to the brain from the menstrual cycle . . . I would've believed we were still focused on the menstrual cycle. I'm suddenly questioning my femininity. I took biology for biolgoy majors as a freshman in college because I was tossing between studying business (with a much easier bio track) or physical therapy. Went business, big mistake. Married a PT, great decision. So, this stuff should sound familiar.

I disagree on the motives for doing well in biology - beat that Chloe dope, Eve! And make sure she knows it up in her myelin sheath. Living vicariously here, because Mini's 'situation' vs the beast of her class didn't end the way we hoped.

Touched that you are thinking of us, and wishing I was on my way to enjoy standing room in what I imagine is a laugh-a-minute household.
November 3, 2020 at 7:21 PM

Busy Bee Suz said…
I'm 53 and just realizing all that the menstrual cycle is; it's hell. Right?
Don't you love it when our kids are smarter than us? I mean, we probably learned all of this stuff, but between aging, alcohol, and childbirth, it's all gone out the window.
November 4, 2020 at 4:50 PM