Sorry for the confusing-as-hell post yesterday. I realized as I was getting into bed that it was the first day of November which - Nicole called it - is traditionally the first day of the month that I post every day. It used to be NaBloPoMo (National Blog Posting Month) sponsored by BlogHer, and there was a giant blogroll of people who did it and there were prizes but I think you could only win prizes if you were in the U.S. which, like, wtf? So much for the global village. I think the original official NaBloPoMo and possibly even BlogHer are defunct now, but I did it the first year I blogged and found it really fun. Then I did it every year afterwards, less for fun than because I am weirdly obsessive and superstitious and somehow locked myself into HAVING to do it even when it's NOT FUN AT ALL, so welcome to my nightmare (not really). Actually I missed a couple of days when we went to Mexico and couldn't get a wifi connection a couple of years ago, and nothing bad happened, so I will treat this like I have my plan to walk every day that I made a few weeks ago - I walk every day that I can at all reasonably fit it in, and I don't sweat it when I can't. Sometimes I'm on my fall visit to Zarah I make really lame posts because I'm too busy drinking and shopping, or I just post a picture of whatever new bra I bought from the awesome bra lady at the awesome bra store in Barrie, and I have just realized that I can't visit Zarah this fall THANKS FUCKING COVID.

The picture that I posted yesterday is from when we were cleaning up the garden in the back and found a chamomile plant growing up among the skeleton of our lavender bush. 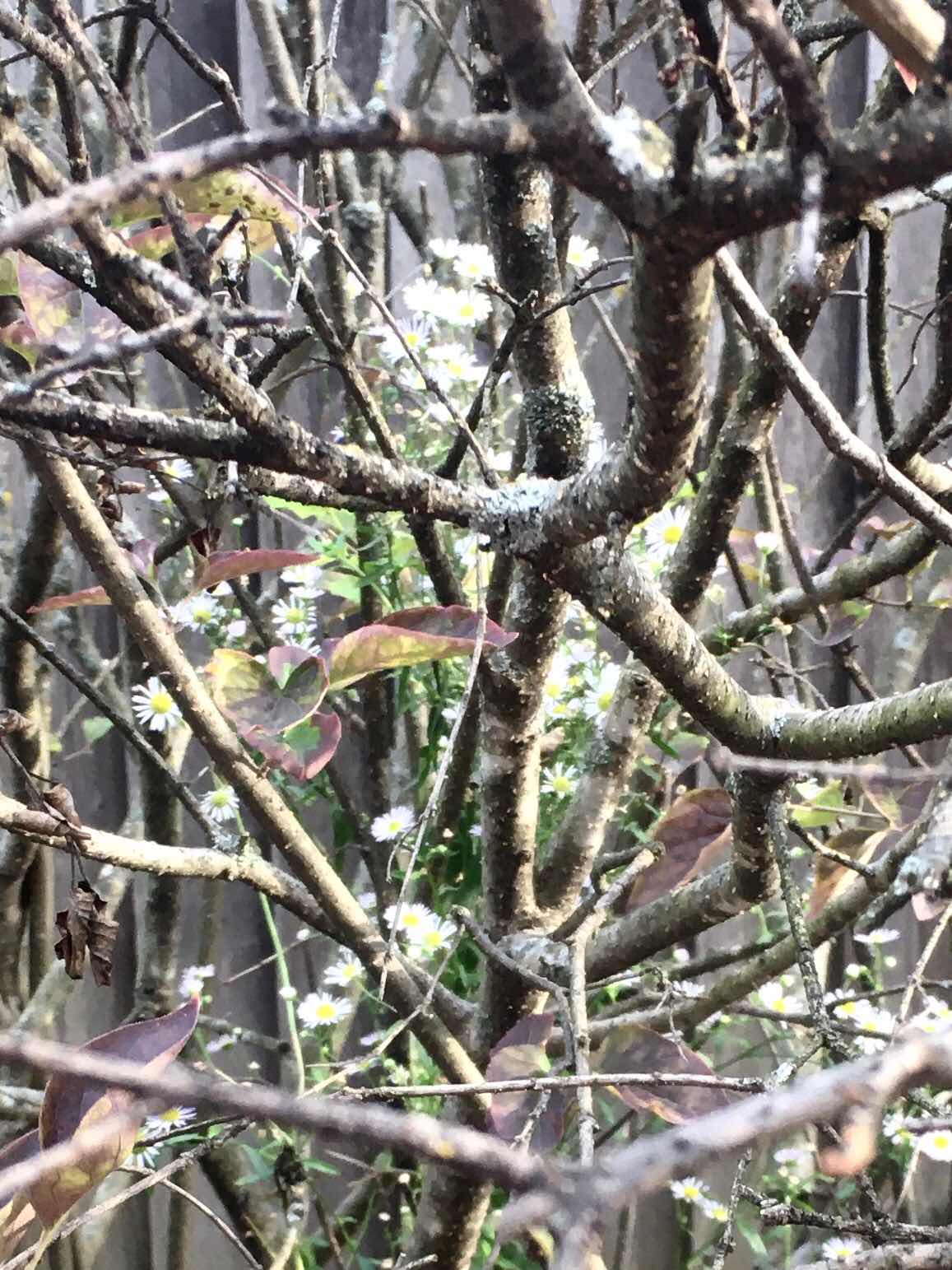 Depending on your perspective, it's an example of life finding a way, or one of "hey stupid, you're in the wrong place".

This morning I was driving Eve to school and she was telling me how this girl in her bio class who took grade 12 chemistry last year and is obnoxious about it was being nasty in their group chat again. Another girl said "the urinary system isn't on the test right?" Which Eve said was a reasonable question based on what the teacher had written. "Chloe wrote 'it's literally all we've done this unit DOT DOT DOT, which, I know adults use dot dot dot differently but this was definitely a bitch move." Eve pointed out other stuff they had done this unit and Chloe said "wasn't that review?" "EXCUSE ME, FUCKING CHLOE, I can guarantee you've never seen the word 'poikilotherm' before. If she had asked that in a non-bitchy way I would have said "I don't think so", but she didn't, so I just said no."

I kind of love that Eve thinks peak bitchy is just saying "no" without any qualifiers. Bet Chloe's still feeling that burn.

See you tomorrow, and every other goddamned day after that. It's cool if I just type out funny stuff Eve says every day, right?

Marilyn (A Lot of Loves) said…
I admire Eve’s response. I’m going to have to learn from it, because I have a tendency to just keep going back and back to a person I’m irked with. I just don’t know when (or how) to stop. If I was more in control of myself I could just say “no” and walk away knowing I came out on top.
November 2, 2020 at 12:42 PM

Ernie said…
Eve rocks. And I am definitely interested in her commentary on stuff as it happens.

Mini just dealt with an idiot, ass-kiss girl in her class. I'm posting about it tomorrow. I think Eve and Mini would be friends if not for the whole distance thing. ;)

The 'only US people can win' rule was dumb, but I'm still grateful that you feel obliged to write daily this month whatever the reason. Looking forward.
November 3, 2020 at 4:46 AM