We are all limping into the week-end. For much of lockdown I was distressingly devoid of energy - didn't exercise, didn't do much around the house, didn't even experiment with sourdough starter (although I did bake a buttload of biscuits). For the past few weeks while back at work (a little) I've been slightly better. I'm getting a walk in most days (I said slightly - I keep eyeing my weights and my squishy arms, but baby steps, right?), I've gotten a few household tasks out of the way and I've made appointments and actually attended them. But by Friday I am wiped with a capital wah.

So here is a picture of Eve - when you finish grade 12 Biology (which you started eight weeks ago - oh right, Ernie asked about the quadmesters: most high schools here split up the semesters into four quadmesters so kids have two courses at a time instead of four; you do one course one week and one the next; you go to school every other day from nine to one, then online the rest of the time; the school population was split into two cohorts, so only half of the kids are there on any given day, and only in one room to limit exposure. If you think it sounds weird, it is.) the very day that the Starbucks Christmas drinks come out. 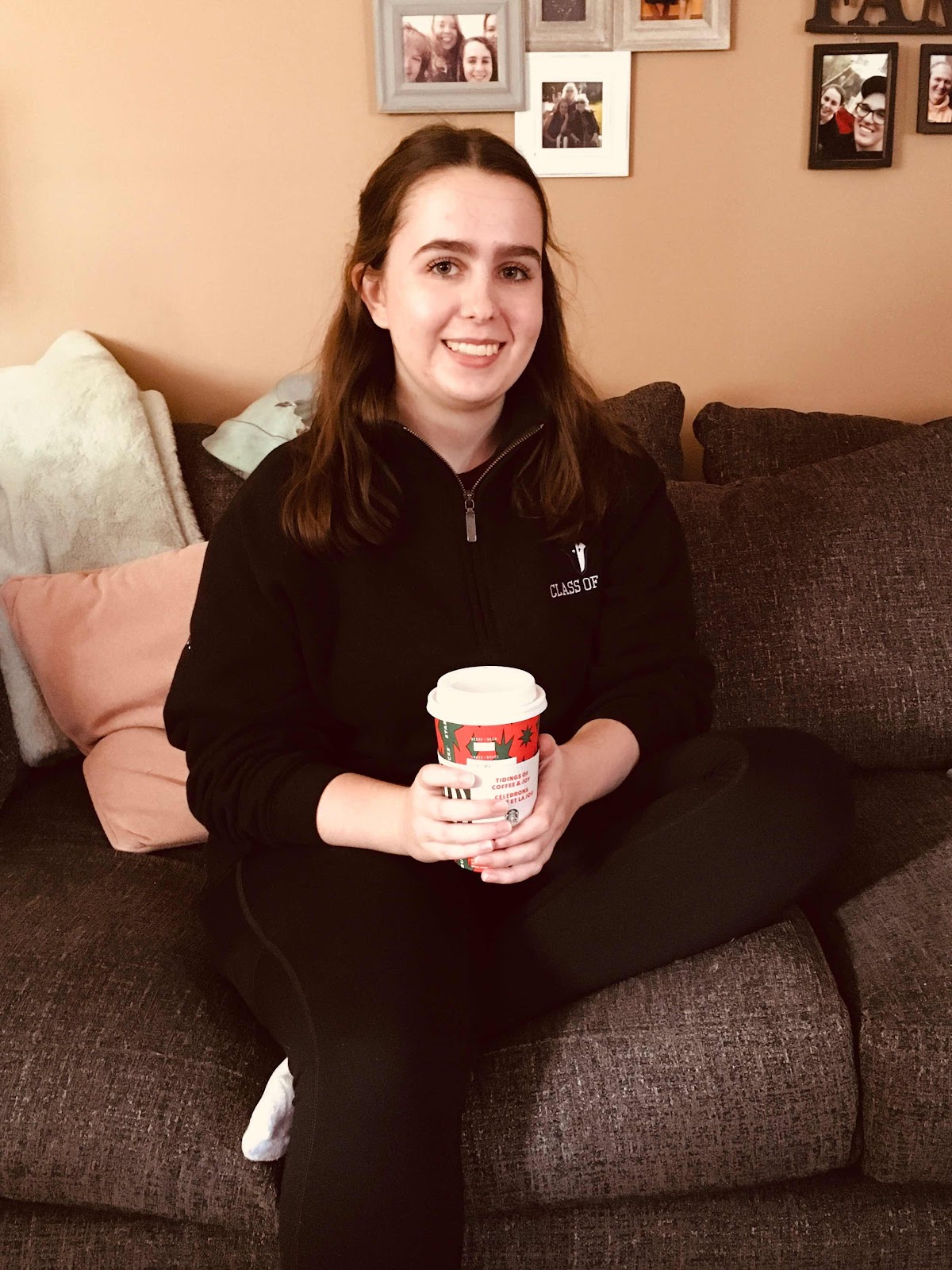 Here also is Lucy, who didn't know what was going on but wanted to be a part of it. 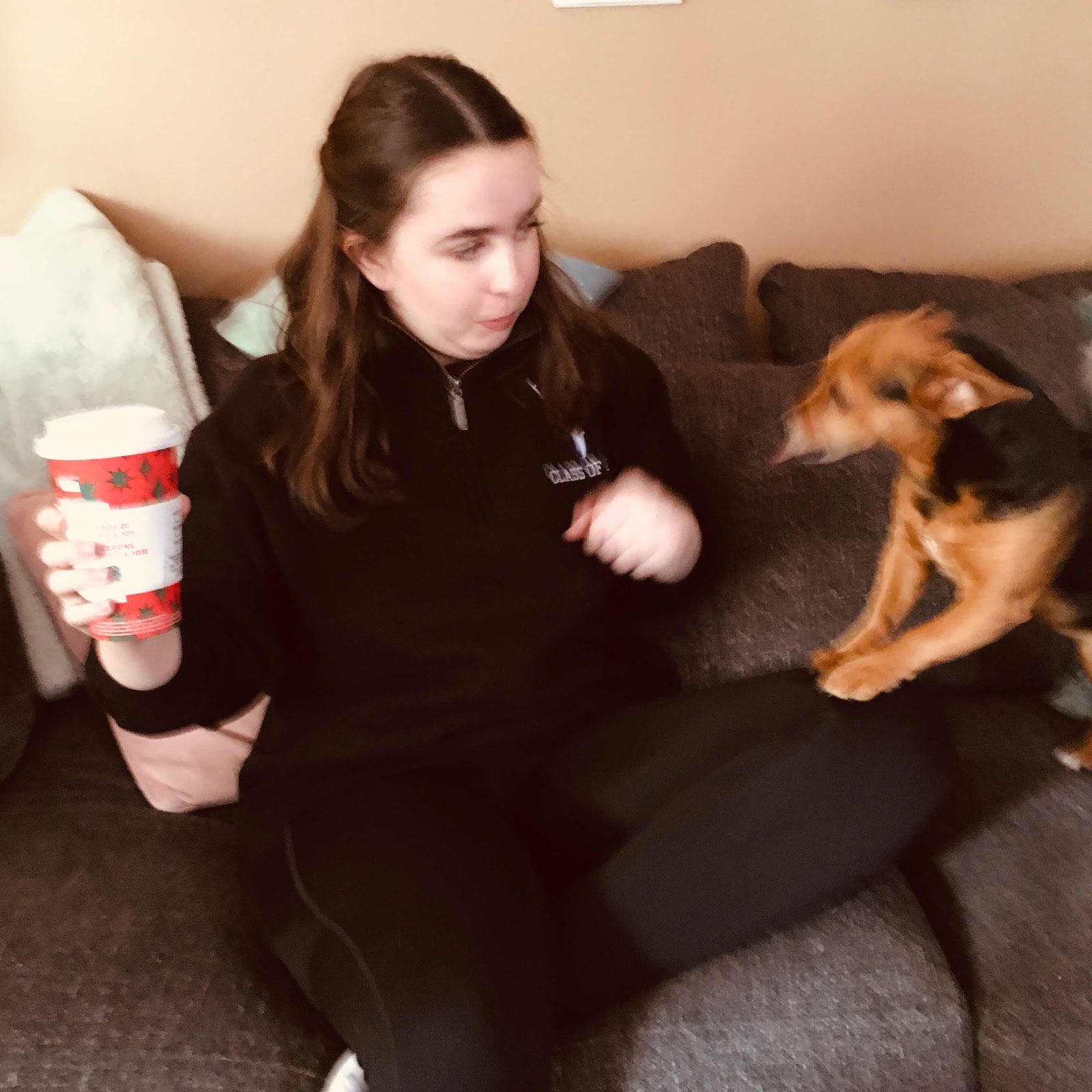 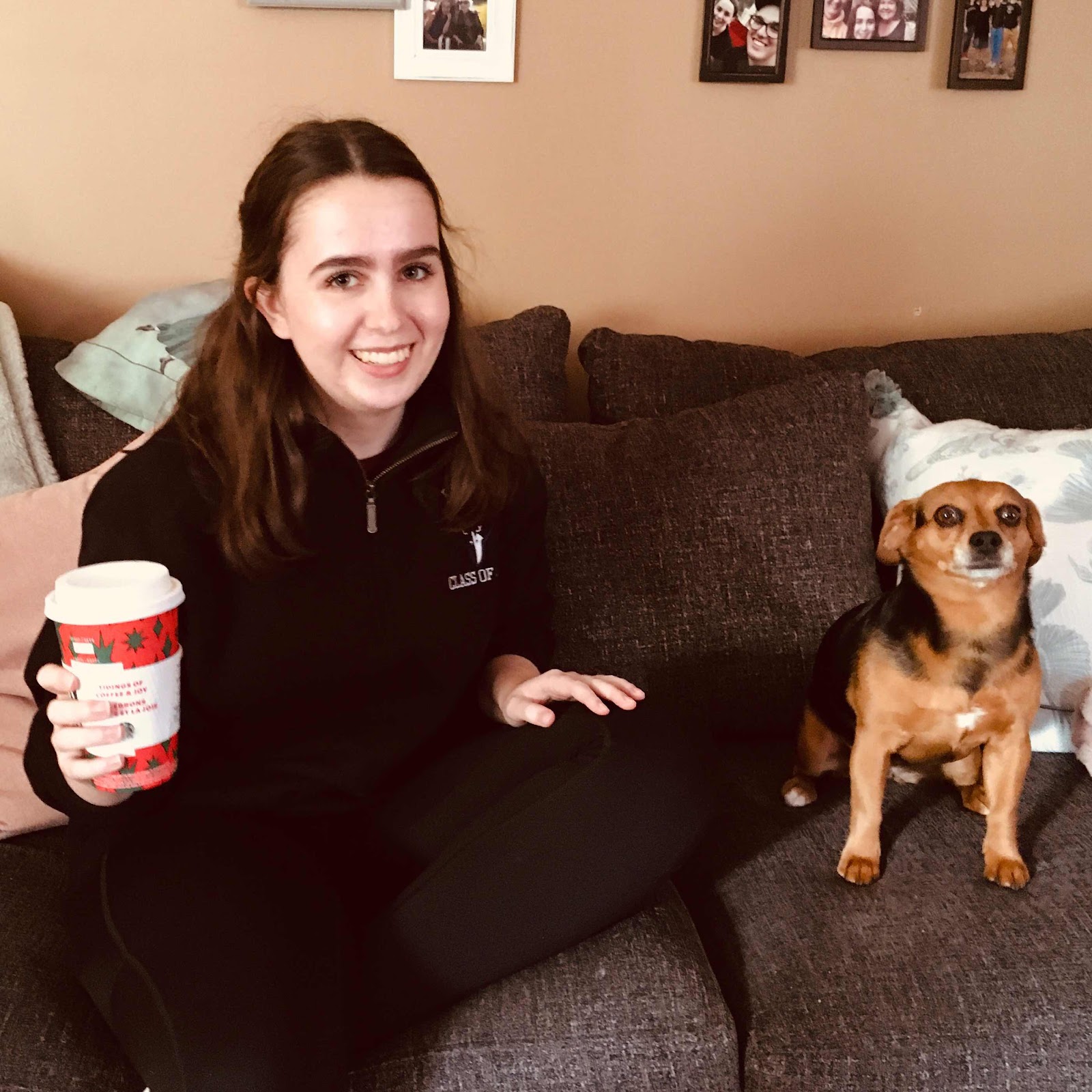 Eve is now flopping around the house proclaiming how tired she is. Seems to me like that takes more energy than it's worth, but okay.

In the Eve Being Funny category, we ordered pizza for the first time in a while and she opened the pizza box and said "when did Pizza Pizza pi - oh my god, I almost said Pizza Pizza pizza - when did Pizza Pizza get so THICK?" Then she looked at the wing box and said "tamper proof seal? What the hell - I was never worried about my wings being tampered with before. Should I be now? Also, I'm pretty sure if I can open it it isn't actually tamper-proof". Then she found out that Angus is going to be home for quite a long Christmas break and said "well he took Physics first, he has to help me". I said "but he hated it" and she said "that's not my problem" and I said "it a little bit is because-" and she said "oh, if he's bad at it?"

Matt is exhausted from working exclusively by phone call - there is emailing too, but mostly so many phone calls, which I totally believe is exhausting, I need a nap after I make a doctor's appointment. Tomorrow we're going to try to do more house stuff, but tonight we are stuffing ourselves with carbs and lounging.

Happy week-end. I will leave you with this inspiring thought - why were there so many blades in the dresser I just cleaned out? 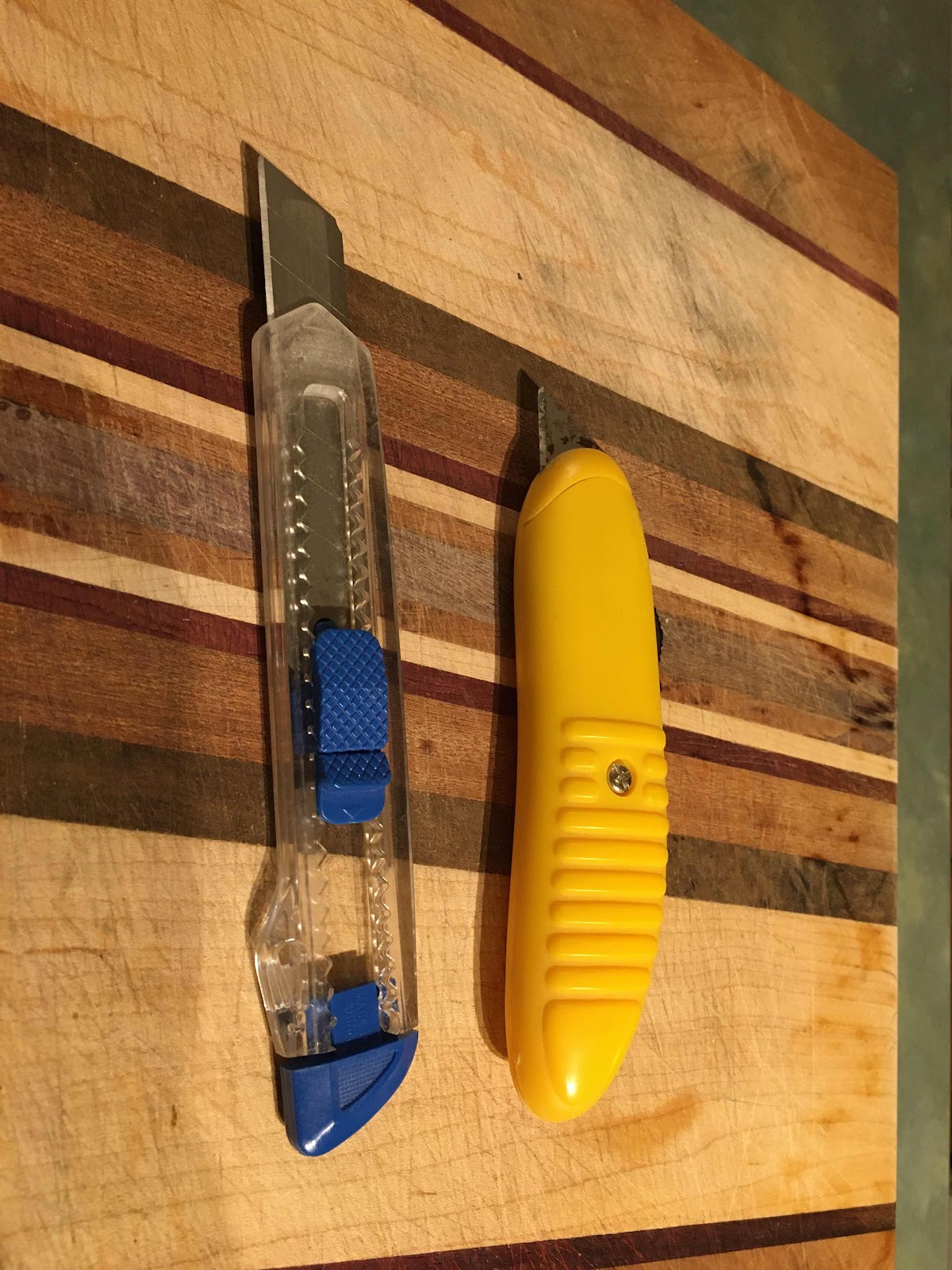 North has been taking advantage of the live-in algebra tutor, to the extent I wonder what will happen when/if he goes back to school in January.

Ernie said…
Those three-in-a-row photos are great. I especially like how Eve resembles a 4-year-old who doesn't want to share her ice cream in the middle one.

Thanks for the quad-semester thing explanation. I suppose I could've figured that out since I do KNOW what quad means. Regardless, it sounds painful. Or maybe it's just good to focus like crazy on it and then BE DONE with it.

I've waited in long lines both yesterday and today: 1 the DMV for 2.5 hours crazy early in the morning, 2. the covid test line for 2 hrs for Tank to be tested. I hope to not wait in any line over the weekend, which really I won't since we are stuck at home quarantining.

Do you live in fear of an intruder and so you secretly store your 'blades' in the front hall dresser?
November 6, 2020 at 5:43 PM

Suz said…
I call those shanks and you need one per person.

I hate making phone calls so doing it as my job would kill me.