Day 24: A Giant Gingerbread Tiger Would Be Really Cool

Slept like crap, but had a good day. Picked up Pam (who you may remember from such posts as this and many others that I can't find right now and I have to get to bed - but she's the apple to my core, the cream to my ice, the soul to my less, and I love her) and went to Manotick - charming little town about ten minutes away that has some cute little stores that we weren't sure were open, but also a Giant Tiger, which we were confident was.

Even though the Giant Tiger is spitting distance from my doctor's office, we had trouble finding it. We kept going to the street where we thought it was and it.... wasn't. Then we'd say "maybe the next street?" and it was quite a few streets but oh well, we got our steps in. We bought some thermal socks and pajama pants and Christmas decorations at Giant Tiger, then went to a couple of the small cute stores and bought some fancy balsamic vinegar and Christmas present stuff. 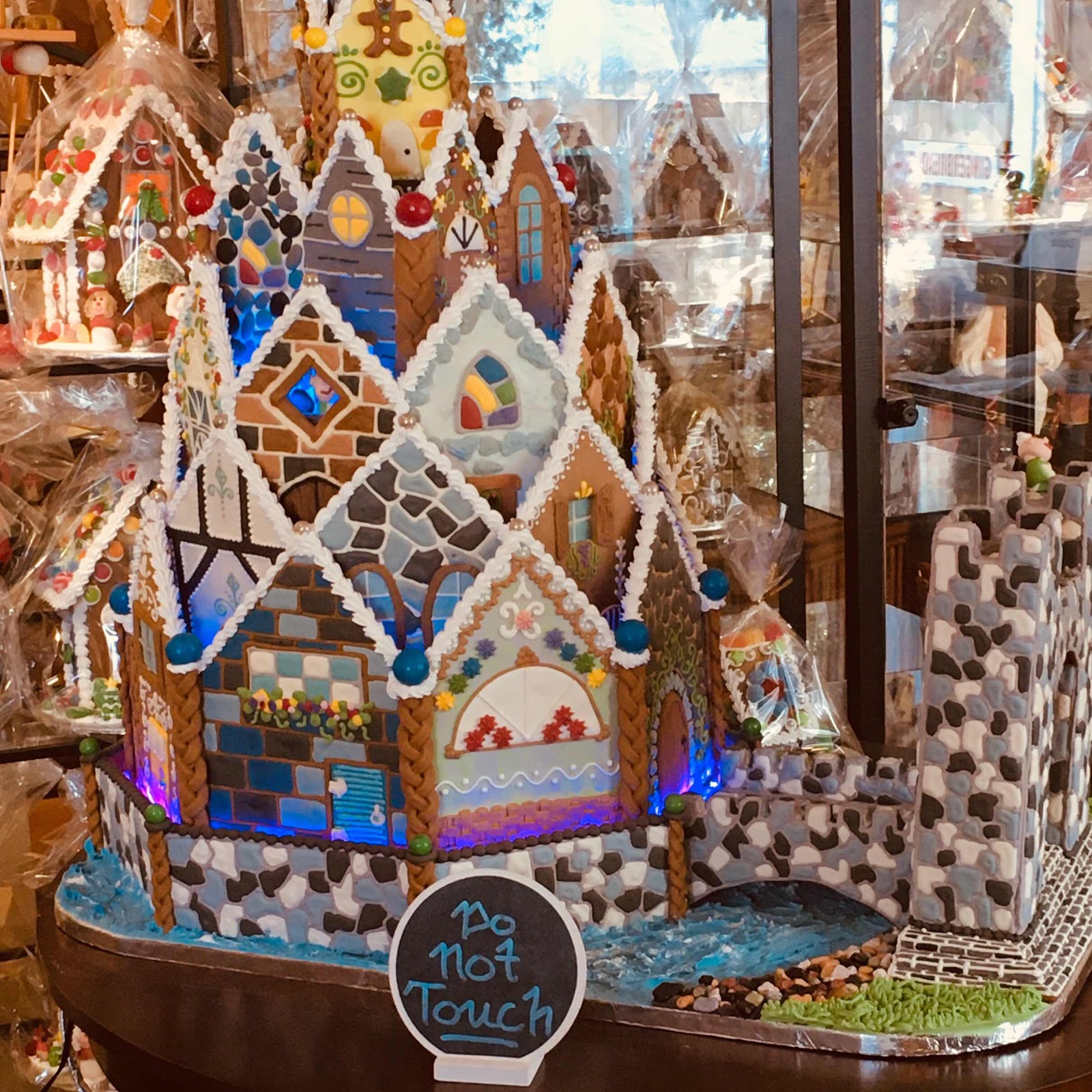 Then I took Pam home and went to buy more paint because we needed more paint and I just found a coupon for thirty percent off paint and it happens VERY RARELY that I find a coupon for stuff I actually need right when I actually need the stuff, so this was very exciting (don't judge my life). The paint guy was really nice and helpful, and not condescending even when I accidentally asked for a litre instead of a gallon.

I knew exactly what colours I needed, but man, do you ever just get swept away by paint swatches, and their insanely whimsical names?

These are called Alchemy and Fervent Brass, you guys. ALCHEMY. And FERVENT BRASS. 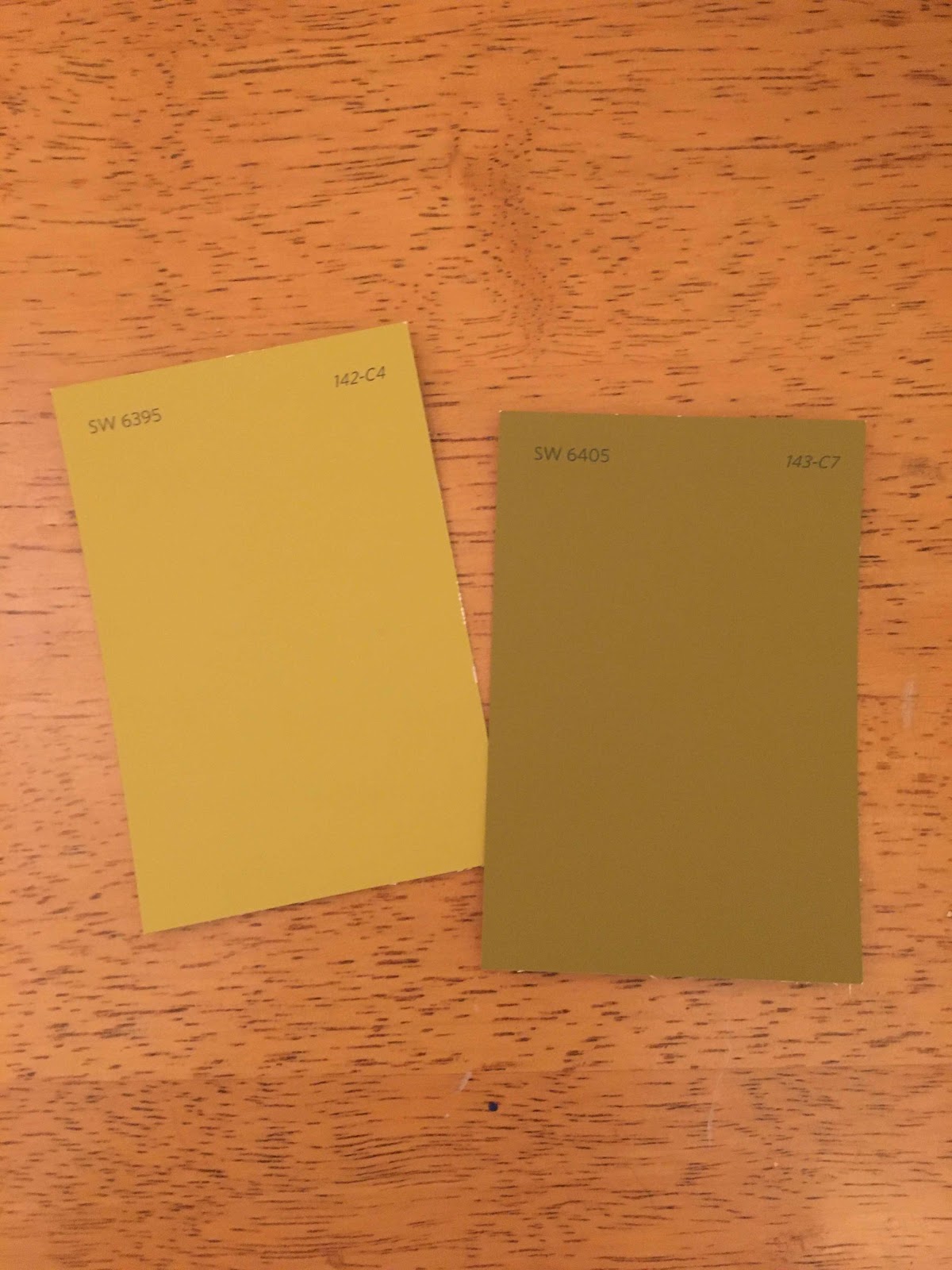 I managed to restrain myself, but barely. Matt is taking Thursday and Friday off because it's American Thanksgiving and he's been working insane hours and the American business will be quite this week-end, so we should be able to get a good chunk of the rest of the painting done.
I have to take my dad for an endoscopy tomorrow and I'm anxious. I was trying to talk myself through it, leaning hard on the fact that 1)it's at the hospital my dad was in for two weeks earlier in the year and I know it very well now, including the parking process and 2)it's my dad, not my mom (I'd say don't tell her I said that but honestly, she'd probably agree). The biggest hitch is that he can't stand or walk for too long unassisted, so I was trying to figure out how to drop him off and have him wait for me while I go park and come back and grab a wheelchair for him. Matt suggested I call the hospital and ask, and after some knee-jerk resistance (because something about my husband suggesting stuff sometimes makes me a jerk, with...knees?), I did. The person I spoke with said that actually I could pull up to the door and bring him in and someone would take him in a wheelchair up to the procedure suite and I could just wait in the parking lot until someone called me to come back and they'd wheel him back out to me. Because they don't want me in the hospital with him, because Covid.
That's.... so simple. And easy. Who knew that calling the place you have to go and asking for instructions would actually.... work? (My husband, yes, he's been adequately praised, rest easy.)
So I'm about seventy-five-percent less anxious now. I'll let you know how it turned out.

Ernie said…
How fun that you and Pam had a day out vs a gym day. Made me wish I had known about your blog in 2016 too.

I never buy those message decor things- thinking once you've read them once you'd be kinda over it. But I do enjoy standing in a shop reading them.

Hope the endoscopy goes well. I so prefer that test to its worse cousin the colonoscopy. Have had my share of both. Docs trying to diagnose my celiac for YEARS mistakenly went with the colonoscopy.

StephLove said…
The idea of a store made of gingerbread reminded me of a time Beth took Noah to Waffle House when he was around six and he said, "Let's pretend it's really made of waffles."
November 25, 2020 at 5:24 AM

Suz said…
I bet the gingerbread place smelled amazing!!n How nice to have an afternoon with your friend, even if you were lost.

I hope all went well with your dad. I too resist the 'wise ideas' of a certain person because I hate that he gets his jollys for always being right. :)
November 28, 2020 at 7:20 PM