I think it's safe to say I'm quite firmly over my previous "oh, I love the seasons, I'd miss them if I lived somewhere more temperate" phase. I am grateful that the snow held off as long as it did this year, but less impressed that it decided to make its first appearance a really memorable give-it-your-all one. 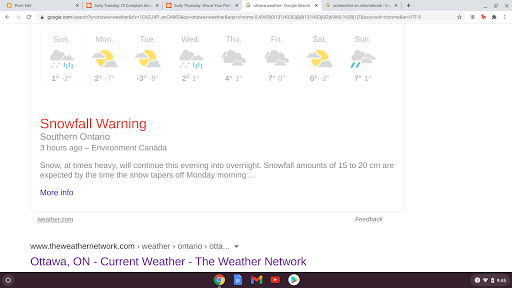 Glancing back over my archives makes it clear that I complain about the snow not often, but reliably. Please enjoy past snow rants here and here.

Random thoughts I had today:

What did you think of Elton John rewriting Candle in the Wind for Princess Diana's funeral? I thought it was tacky in the extreme. It was a lovely song about Marilyn Monroe, and then Diana, who I believe he was personal friends with, died, and he just, like, substituted her in a song that was written for someone else? Did you find it a loving tribute because there were similarities in the way fame and the public were damaging to the two women? Or did you think that, maybe, someone who has written upwards of 400 songs could maybe have arsed himself to pen one more for his friend's funeral?

I was just reading about how in Ancient Greece, homosexual relationships were actually privileged over heterosexual ones - women were kept confined to the house and only considered valuable for procreation, and it was considered more natural for men to prefer the company - emotionally, intellectually and sexually - of other men.  I wonder if there were men who preferred being with women but had to hide it the way homosexuals have had to in the more recent past. I find some twisted humour in imagining this, although of course it's mainly just really sad.

Well, there were two, so technically "thoughts" was accurate. My blood pressure readings have been much lower since a friend gave me some tips. Turns out that holding your arm as tense as a steel baton while thinking "I'm dying I'm dying I'm dying" is not conducive to accurate or non-alarming results.

Hope everyone has a good week. I am working, taking my dad for an endoscopy and getting my snow tires on. And I might venture into a *gasp* actual mall.

Nicole MacPherson said…
Hmmm, I actually like the English Rose version. I mean, the guy must have been destroyed at his friend being dead, she was so young, so I cut him slack for not writing a song right before the funeral. I remember watching it like it was yesterday. Wahhhh so sad. R has a home blood pressure thing and it's funny, once he took it while watching the Patriots play and it was EXTREMELY ELEVATED. I think it's more accurate to sit and breathe deeply. If you have a watch that shows heart rate, it's kind of fun to see how you can change your heart rate with breathing.
November 23, 2020 at 4:18 AM

StephLove said…
My BP is always lower if the person taking it is talking to me about anything non-medical, which stops me from worrying about what the numbers are going to be.
November 23, 2020 at 6:42 AM

Ernie said…
I do find the recycled song for Diana a little disappointing. I assume that he was emotionally distraught and maybe his creativity was stunted. But then, why not wait and pen something to devote later?

Love the image of you tensing up during BP taking and then being all: OH, THIS POSTURE IMPACTS THE RESULTS?
November 23, 2020 at 7:13 AM

the queen said…
But he never writes the words - the other guy, Bernie, does. So since they re-used the tune, he did absolutely nothing.
November 23, 2020 at 3:25 PM

Suz said…
I thought it was kind of weird to use the same song and change out some words, but then again, I've not written or sung a song for a friend who has passed either.
Snow. Goodness. you must be over it all by now; locked down AND cold as hell.
November 28, 2020 at 7:11 PM