Surly Thursday: Shove Your Patronizing Snow Joy Meme Up Your Ass (not really) 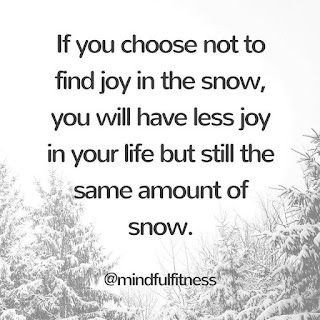 Honestly, everyone who has posted this is a friend, and I'm not actually angry at them, because on the face of it, it makes perfect sense - snow is going to happen, so why not try to find the joy in it? The problem is, it's terribly simplistic. People aren't angry at snow because they're inherently cranky or miserable. For a significant portion of the population (seniors, people with mobility issues, Reynaud's syndrome GOOGLE IT), snow represents an actual hardship. It makes walking harder. It makes driving harder. None of these problems are going to be banished by thinking "oh, snow is so pretty, I will henceforth cease my uncivil grumblings!"

I actually unfriended someone on Facebook last year because there was one more bad storm that coincided with a pretty bad mental health crisis and her chortling at Ottawa from warmer climes was the last straw (yes, I acknowledge that that was, in fact, down to me being cranky and miserable. Whatever, my timeline, my rules).

I'm not saying people shouldn't try to find the positive in the negative. I'm not even saying think before you post memes. I am just surly about it. Also, HOW DO YOU KNOW I DON'T FIND JOY IN COMPLAINING?

Now, onto that infuriating "There's only ONE MONTH left in the decade, what have you accomplished?" garbage on Twitter. I am so not the target audience for this kind of thing. I don't make New Year's Resolutions - I don't have a problem with people who do, but generally the stuff I want to improve is always the stuff I want to improve, and thinking that January, of all god-forsaken months, is the time that I'm suddenly going to start stuffing my gob with twenty-four green vegetables a day and make a million dollars strikes me as a recipe for colossal failure and subsequent self-loathing.

It just seems like such a Western, new-agey, bourgeois concept, which I guess is not out of place on Twitter. I do like the jokes that inevitably followed, and this is my favourite response. And once again, I feel like I'm dunking on something fairly innocent and denying people joy in feeling pride about their achievements. It sucks when I get stuck between being righteously surly and insanely self-critical.

I'm going to go work the book fair now, after I brush the joyful fucking snow off my car. For the record, I have run or volunteered or worked at TEN BOOK FAIRS over the last decade - put that in your pipe and smoke it, unless one of your feats was quitting smoking, in which case, sincere congratulations.

Swistle said…
That snow meme is the kind of thing where I feel like I can tell it to MYSELF and get middling-to-good results, but if ANYONE ELSE tries to say it to me, WOE BETIDE THEM. And I particularly hate it when I see it posted by someone who does not have a HELL DRIVEWAY like I do. COME SHOVEL MY DRIVEWAY AND THEN SEE HOW MUCH JOY YOU FEEL WHEN THE ROOF WARMS UP A LITTLE AND ALLLLLL THE SNOW FALLS OFF OF IT AND FILLS THE DRIVEWAY RIGHT UP AGAIN AND IT'S GOT TO BE CLEARED BEFORE IT'S TIME TO LEAVE FOR SCHOOL AT SEVEN A.M
November 14, 2019 at 12:13 PM

Nicole MacPherson said…
It's not the snow so much, as it is the cold that bothers me. But snow is a huge pain, shoveling and poor driving conditions and thousands of accidents, and yes, people with mobility issues who become isolated in our very long winters...

I'm all for finding joy where you can, and as Swistle said I can pretty much say that to myself and feel better, but let's not force things on other people mmmkay.

I have to admit though, I'm feeling so much better about winter driving since I left my bad-commute class!
November 15, 2019 at 5:49 AM