Do we all look the same to them?

January 24, 2012
We met a really nice family from Peterborough a few days into our trip.  They had a boy and a girl, in reverse order from ours, but Eric was only two years younger than Angus which was fine for water sliding and getting cheeseburgers and playing ball in the pool, and we all know how Eve feels about "people who are older than me that aren't my brother".  Mike -- the dad --  was funny and friendly and has a job similar to Matt's, and  Ashley -- the Mom --  was forty and had a perfect bikini body and I STILL liked her - that's how nice she was.

We still had a lot of  family time, but we'd usually meet up with these people for a beach walk in the afternoon, the kids would run off to get cotton candy or go on the water slide or the lazy river, and we'd hang out and play pool and challenge the bar staff to come up with new and exciting drink combinations in the evenings.

There were two poolside barbecue nights - one was a Caribbean night and one was Western night.  Both had live music and entertainment, which was definitely....entertaining.  On Caribbean night, resort staff dressed in red satin and limboed under a flaming pole: 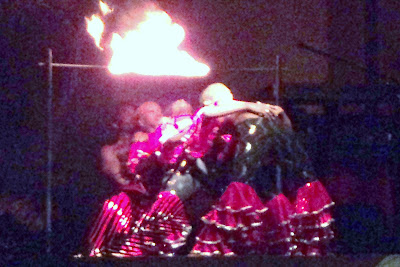 For Western night, they had to dress Western - I wonder if there was a choice between that and the flaming pole because I'm pretty sure the fiery stick would be looking fairly good to me at that point.  Not only that, but the MC's accent made 'cowboys and cowgirls' sound like 'callboys and...' well, you get the picture.  Until then, I was thinking this looked like a pretty good place to work. 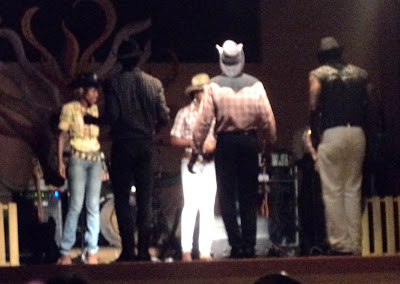 There was a St. Lucian country singer who was actually really good.  The staff was always walking around singing all the time anyway, but usually it was reggae stuff - then as I was at the buffet I heard them all singing along with the entertainment and I was thinking "geez, they know all THESE songs too?"  Then I thought maybe it was just because there was a Western night every week or two.  But apparently the story is that a lot of the young people from the island go to the southern United States and work as migrant workers.  Then they come back, bringing tales of wonder and adventure and also the musical stylings of Toby Keith, Alan Jackson et. al.

In the course of trying to get people up dancing, the guy to the far right of this picture in the white pants was dancing by himself, wrapping his arms around himself and then opening them imploringly to the crowd.  Ashley loves country music and was outfitted in Western style, and said she was going to go dance with him.  Her husband was cool with this, since he doesn't like dancing.  I tried to get a picture, but it didn't really turn out.  Anyway, when she came back to the table, she said he asked who her husband was and if he minded her dancing with a stranger and she pointed him out - 'dark hair, plaid shirt'.  The guy said he'd bring her husband a rum and coke.  We started talking, and in a few minutes we saw the guy approach our table.... then walk right by it and deliver a drink to a gray-haired man wearing a t-shirt, whose wife (or date) was wearing a cowboy hat, but there the resemblance ended - she was a good fifteen years older and much less good-looking than Ashley.

I told Ashley she should go up to him, grab his shirt and yell, "Did I mean so little to you?"  Then we went to dance and the other couple came up and every time I saw them I would almost fall on the ground giggling.  This was me and Matt imitating their theoretical discussion: "Why the hell are you giving me a rum and coke?" "Because I danced with your wife!" "WHAT?! WHEN?! -- You said you weren't going to do that any more!" "I've never seen this man before!"

Ashley took it pretty well.  The drinks were free, after all.  But she did say philosophically, "I was just another white chick in a cowboy hat to him".

holidays the general perversity of things

Rachel Cotterill said…
They must see so many hundreds of tourists - confusion is excusable! Fun story, though :)
January 27, 2012 at 11:54 AM

On the other hand, if this fella spent any time working in the south, he may have heard a good ole Leonard Skynard song called, 'Gimme Three Steps' and decided it was safer to pretend he couldn't pick her out. ; )
January 29, 2012 at 9:16 AM