Oh where oh where has my little blog gone?

July 20, 2011
I'm stuck. Hardcore stuck. I don't know if it's BOLO letdown, or summer laziness (it is sort of too hot to sustain life today) or something in the water. Wait, it's Wednesday, I can post pictures! No, no, no, that would be bad. I have a feeling that if I don't write something today I might be done forever (yes, clearly I'm feeling reasonable and stable and not at ALL prone to ridiculous, dramatic, ultimatum-like statements). I'll post pictures tomorrow.

Eve is in tennis camp this week. Okay, one picture because she looks freaking cute: 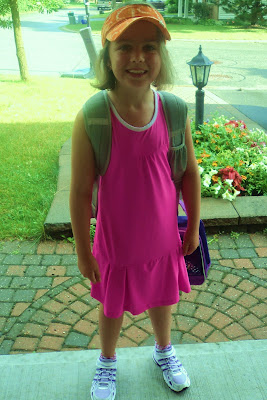 I was ready for her to be in camp. We've had two weeks of extreme Mother-Daughter togetherness, with Angus playing baseball or practicing baseball or hiding in the basement resting up for more baseball, and it's been great, but I have an assignment due tomorrow and the coinciding of tennis camp with a couple of morning ball practices meant I could get to the gym a couple of times this week and basically, it was all going to be good. Which it is, mostly. Except I'm having this stupid little thing when I drop her off in the mornings. I'm not a morning person. I drop them off at school looking like I just rolled out of bed, because, well... I drop her off at camp looking the same, and walking past the mothers all dressed and coiffed for work is giving me some kind of mental cramp. I don't know why. There are other mothers who show up in capris and tank tops. Not one of the well-dressed moms has given me any kind of look other than a smile (lest anyone be confused about the fact that this is ALL in my diseased little brain).

I run through it all again. Last week my husband was in California. This week he's in Maryland. In the fall he'll be in Asia again. This is what works for our family. This is what works for me. If I really need a project, I can play the damn piano more, or sort through the shit-ton of baby clothes, children's art and various other detritus in my basement. I could even shower and dress up to drop off my kid at camp (yeah, that wouldn't make me feel at all stupid. Maybe I could make a fake work badge too!).

You'd think, having just read and wholeheartedly agreed with this post, and having just had two fantastic weeks of summer vacation with my kids (and one with my best friend) that have only confirmed that I love being a stay at home Mom, that I would have some kind of immunity to this kind of bullshit. You know in the middle of that song Forget You where Gwyneth Paltrow wails 'whyyyyy' in that horrible screeching-cat voice? That sort of says it for me.

I did make it to the gym after dropping her off yesterday. I did weights and the hill workout on the treadmill, and really enjoyed it. So yeah, I might as well just face it - NOTHING's normal this week.
hear me whimper

Bridget said…
Has you been told that Eve looks just like you, because in that picture she really does.

I can mail you my old work badge if you like. It's on a lanyard even! Ooooo. Actually, I would love it if you dressed up one day sporting a fake work badge. The thought made me laugh.

I'm always the late mom, that shows up for drop off with wet hair, my shirt all askew and my pants falling down because I couldn't find my belt. We're in good company.
July 20, 2011 at 9:47 AM

Finola said…
Let me tell you this Mother who is all dressed up for work is looking at your tousled hair and casual clothing with great envy.

Ms. G said…
I just put on real clothes an hour ago. That would be shorts and a tank top with flip flops : ) As a kid I always thought my mother looked beautiful while I was watching her leave for work. That's why I chose to be a stay at home mom. Does that make sense?

Nicole said…
When my husband travels for three days I kind of unravel. I'm good for the first day, enjoying my wine and my NYPD Blue reruns that for SOME REASON he doesn't watch with me (perhaps it's my ongoing commentary about my various crushes on the show), the second day I'm okay, and by the third I'm pretty much a mess. I don't like being the only responsible adult in the house! So what I'm saying is that you're pretty awesome to do what you're doing!
July 20, 2011 at 5:07 PM

Maranda said…
I think bloggers are on unofficial summer hiatus. The new season starts in September.

Amber Strocel said…
I am going to go on a total tangent here. Consider yourself warned.

So, I first hear that "Forget You" song on Glee, because I have not been current in terms of pop music since approximately 1995.

Recently, I started running, and I thought that was a catchy song for my playlist so I decided to download it. Imagine my surprise when I discover the song is ACTUALLY called "F**k You", and "Forget You" is the safe-for-radio version.

So, I had to go to YouTube, and listen to both. And then I had a long internal debate with myself, because I am a Grown Ass Woman and if I want to listen to a naughty song I can. But in the end, I couldn't bring myself to do it, and I downloaded the sanitized version.