Let Me Entertain You With My Awkwardness Part ???

I think it's only Part 2, technically, because I keep meaning to make it a series but haven't yet.

So I mentioned that last week I took Eve's friend Davis for her fourth Covid vax shot because she has a tendency to faint and her mom, my friend Jody (HI JODY) is doing a very demanding very terrible training course at work and couldn't get away. The week before, Eve and I had gone for the same shot.

For our first couple of shots, I was pretty anxious about making sure we got there on time and did everything correctly and didn't do anything to mess up our chances of getting the vaccine that we really, really wanted, because we were a bit more naive about what the vaccine actually meant in terms of what life would look like afterward. I have no regrets about getting it, I'm just a bit more clear-eyed about the fact that we can't vaccinate our way out of this pandemic. By our third shot, I ran a bunch of errands with Eve beforehand and Matt and I showed up just on time and out of breath, after he took the time to change his t-shirt which he realized read "Killin' It" just before we left.

Our first booster shot was in December, which is quite a few months away now, and I was a bit anxious again (I also started an antidepressant booster medication (wow I'm saying 'booster' a lot in this post, or maybe just this sentence) which can temporarily increase anxiety). We left with lots of time, and picked up a giant pack of Timbits to give to the staff, because I appreciate what they do so much and always mean to do something like this but usually forget or chicken out.

(TMI alert): I always go pee before we leave to drive somewhere. Today I went twice, and by the time we got to the school, only about fifteen minutes away, I had to go again - like I said, anxious. I was annoyed but I figured I would just find the bathroom when we got inside. There was no line, though, so we walked right in, dispensed our Gratitude Donut Holes (they were very well received), and walked in to get our shots. 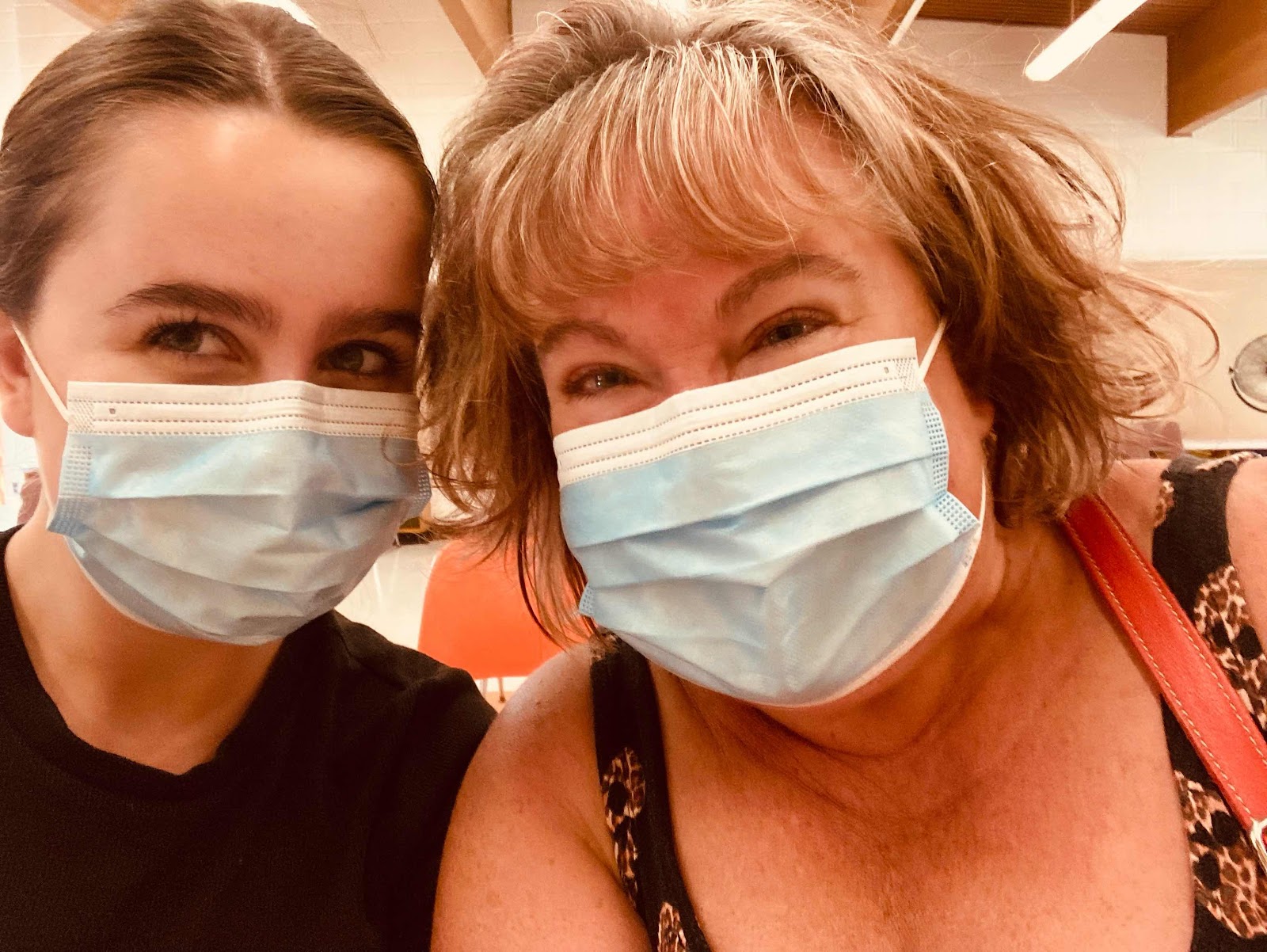 We had the loveliest nurse, who complimented my Sandbanks tan and gave Eve the last fun band-aid even though she's nineteen. When we were done, of course we had to wait the fifteen minutes to make sure we didn't faint or have a reaction. I should not have forgotten this, but I had. I left my daughter and my purse on the chair and went to find a bathroom. 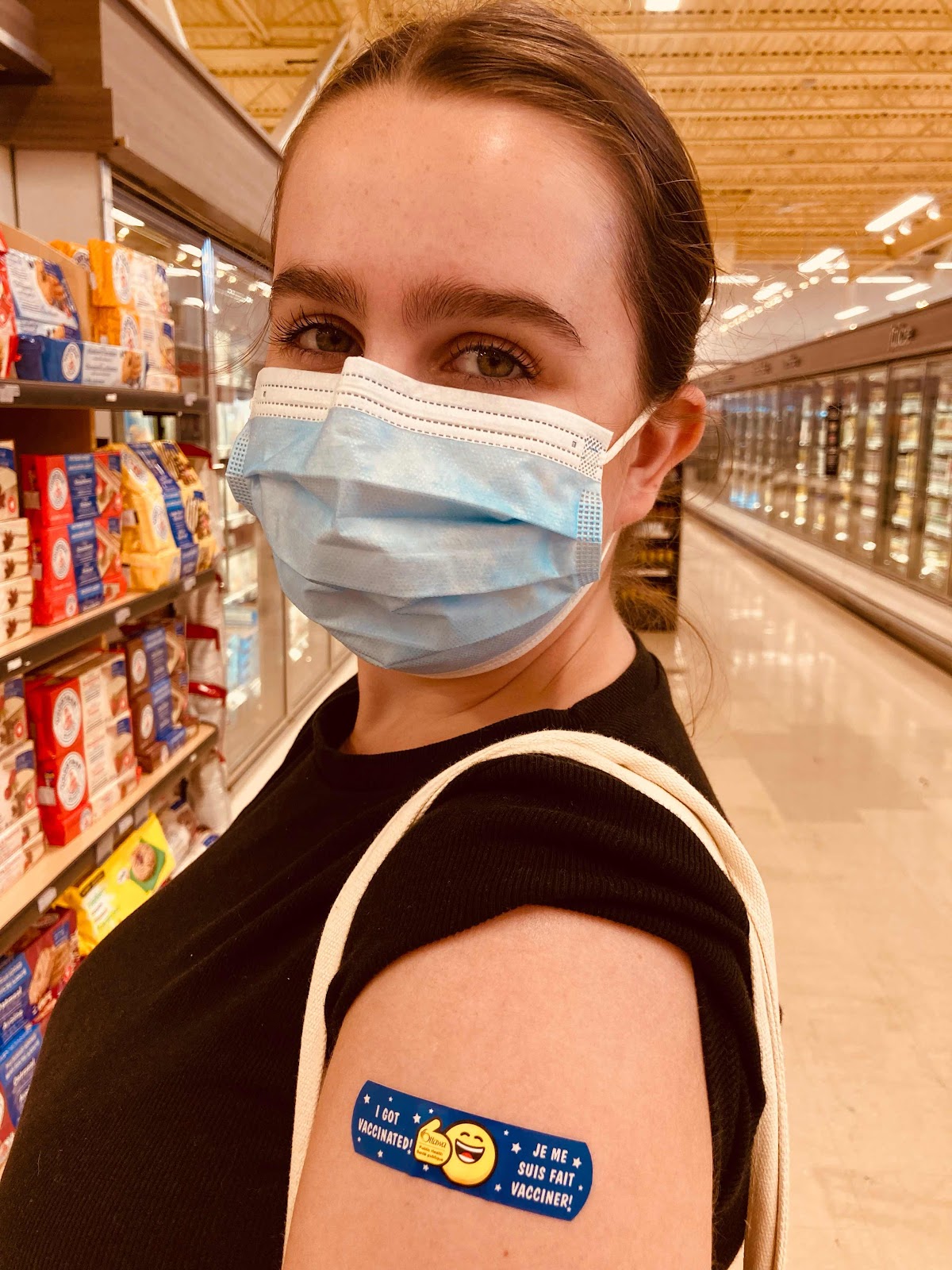 After I had gone and returned to the gym and waited with Eve and we left, I burst out laughing as we were exiting the school. Eve asked me what the hell was going on and when I could breathe again I explained that every other time we had gotten our shots, when we were leaving we had to show our paper with our departure time at multiple checkpoints to make sure we weren't leaving early.

This time no one asked us anything and we walked right out. Which means that me telling every single person I encountered in the hallway "I'm just going to the bathroom!" was unnecessary at best, and aggressive oversharing at worst.

Eve said "oh great. You've gone from being the wonderful lady who brought all the Timbits to the weird lady who told everyone she was going to pee".

Nicole said…
Lolololol!!! Ah well, I feel like we all get to know each other well when in a waiting room, so what's a little pee-talk between friends?
Good for you for bringing the Timbits! I'm going to remember that for next time.
August 28, 2022 at 2:20 PM

StephLove said…
Being anxious makes me need to go, too. I held up the whole family needing to go find a restroom right before we got in line for the biggest coaster I will ride at Hershey Park on Saturday.
August 29, 2022 at 5:58 AM

Ernie said…
That's funny. I pee before we leave the house too, and now if the kids are hoping to get somewhere early - they ask me before they walk to the car if I have to pee. Even when I don't - the power of suggestion gets me thinking about it and I holler, I'LL JUST RUN IN REAL QUICK.

I have never heard of Timbits, but I now know they are donut holes. Very sweet of you, literally.

Suzanne said…
I am an anxiety peer too. Fun fun fun. I am also an anxiety oversharer, and a rule follower, and I for one think you were just following The Rules (that you didn't know had changed) and you were therefore being RESPONSIBLE.

I keep following last-known-Covid-precautions (for example, our dentist and orthodontist both used to require a phone call from the parking lot before coming in), only to be treated as if I am a visitor from a parallel universe where no one remembers (1) that we used to do that (2) that I would have NO WAY of knowing we'd stopped.
August 29, 2022 at 6:25 PM

Common Household Mom said…
This made me laugh out loud! I have the same wise peeing practice, and am much more vocal about it now than I was in my youth. Just the other day, I said to my husband, "I have to leave for my meeting now. But first I have to pee!" And of course he said, "Make sure you tell everyone at your meeting."

What are Timbits? I am going to guess based on context. Are they doughnut hole confections bought at that Colossal Canadian Coffeeshop, Tim Horton's? What a pleasant gift to bring!
September 1, 2022 at 7:13 PM