I'm kind of stuck at home having my arm squished every half hour, so might as well try to make up somewhat for my recent blog neglect.

So yesterday I was whining about having to do the 24-hour bp marathon today. I had done a little reading and gotten myself into a fine state (yes, I'm aware of the irony). From what I found, I wasn't supposed to drive, but no one had told me this when booking the appointment. Matt was due to leave for the airport right around the time of my appointment (Air Canada still has mask and vaccine mandates - I'm not thrilled with him traveling, but it's better than it could be), so he wasn't able to drive me. I decided I was just going to drive myself and if we had to reschedule that was on them.

I also read that I wouldn't be able to take the monitor off at all for 24 hours, and I wouldn't be able to bathe or shower. I know this is a first-world thing, but I have major sensory issues, and I have a cool shower a minimum of twice a day and ALWAYS before bed, and I haven't not showered for twenty-four hours since I was in labour with Eve nineteen-plus years ago. Oh wait, we did go camping last summer and the showers weren't open, but I basically sponge-bathed comprehensively in the dark in the campsite before going to bed. So in addition to wearing an uncomfortable cuff that strangled my arm every thirty minutes, I wouldn't be able to shower before bed, AND then I would be trying to sleep with my CPAP on AND the aforementioned uncomfortable cuff.

I was FB chatting with a group of friends, and they were all being encouraging, with 'you got this!', 'you can do anything for 24 hours!' 'it's all good!' I appreciated this, but what I really wanted was someone to just say "that sounds miserable". So I FaceTimed Eve, and she, gratifyingly, looked horrified at the description and said "oh my god, just let the blood pressure take you".

So I drove to the place - getting there didn't threaten my blood pressure, it wasn't far or a complicated drive. When I pulled in by the building, I saw this goose just absolutely fucking chilling in the middle of an industrial park, and it somehow made me feel like I was probably going to be okay. 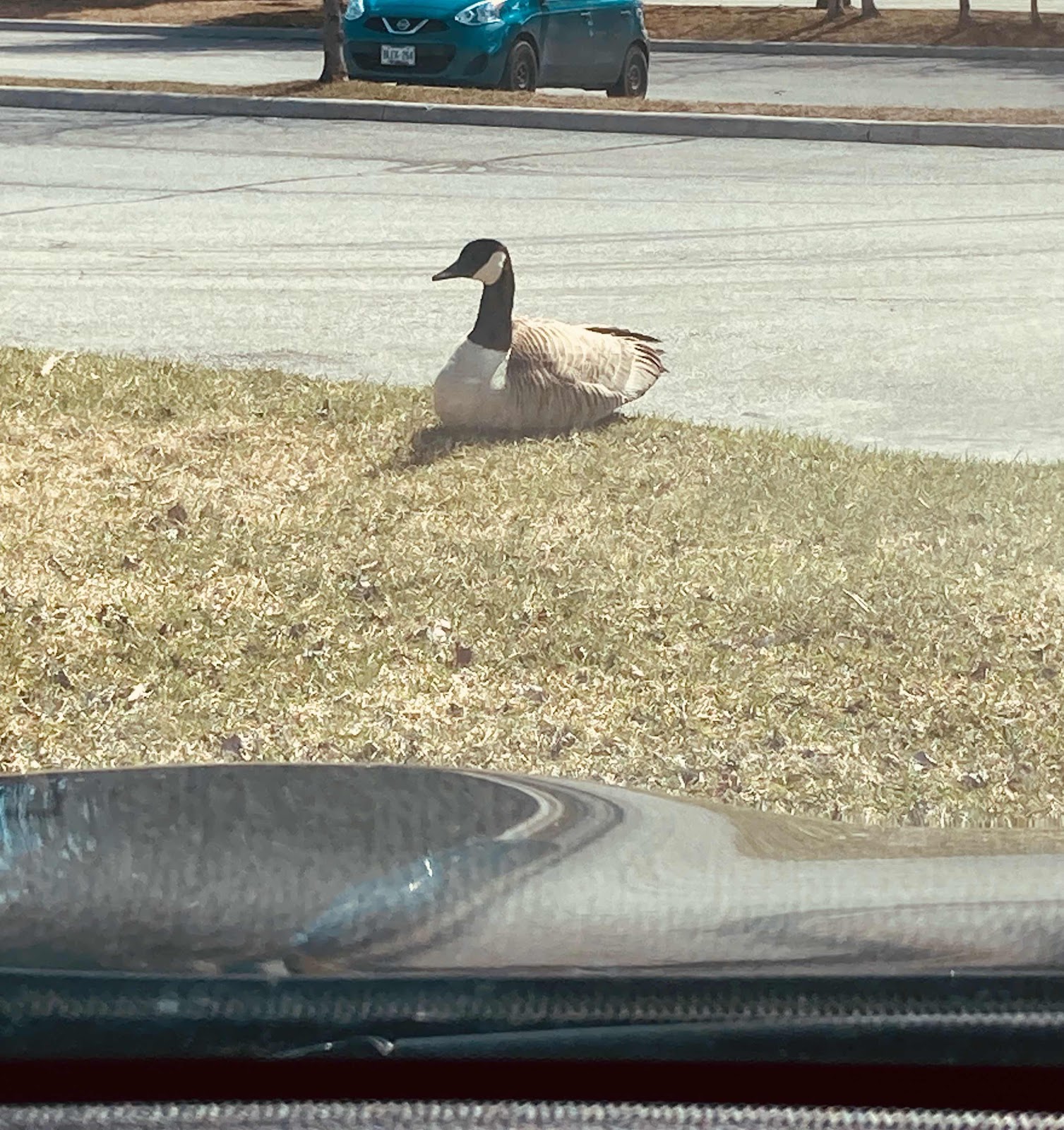 I then realized I was actually at the wrong building, but I had left plenty of time, so it didn't harsh my newly goose-calmed vibe.

The clinic was swanky and clean and not crowded, and the receptionist was nice and had a messy bun, and listening to her call people and try to confirm their appointments while they misunderstood everything from the date to the time to whether it was a phone appointment or who was actually calling them, and she repeated everything patiently while periodically closing her eyes and having to deep breathe was hugely relatable. I have overwhelming anxiety related to anything medical, so I thought I would be hyperventilating or trying not to throw up by now, but I was good. I was sitting beside a large pillar, and at one point a woman waiting for her husband in a perpendicular row of seats kind of shifted to look around the pillar. I turned my head and she moved her head back behind the pillar, then back to look at me in an accidental peekaboo move and we laughed.

StephLove said…
Good luck with the remaining time. Does it beep at night? That would drive up my bp for sure.

I once opened the door for pizza delivery guy wearing an old demin skirt with an elastic waist that chose that exact moment to give out and it fell down to my ankles. I took a step to the left so I wasn't in front of the door any more, yanked it up, stepped back, grabbed the pizza, closed the door and died.
April 20, 2022 at 4:59 PM

Ernie said…
You look super cute. Love the vest. I wish all of my clothing came with those kinds of pockets. I cannot babysit without pockets. Between tissues and my phone and whatever they hand me, I need pockets.

I'm so glad you get to shower. I could totally picture the receptionist. I love her. When Lad started at school in New York, I flew out for one of his games and brought him to a new doc who would manage his ADD meds while he was there. The receptionist was EXACTLY the stereotype of a receptionist that one would see on TV in NYC. She had a thick accent and was feisty and impatient and like YEAH, WHAT? when I spoke to her. I wanted someone to congratulate me for finding the office in a rental car. That wasn't gonna happen.

It would kill me to have something beep at me during the night. Takes me back to the nurses coming in and waking me to nurse a newborn in the hospital. I so badly wanted to say YOU DO IT and then I would remember, OH, YEAH, THIS IS ON ME NOW. Anyway, good luck.
April 20, 2022 at 8:35 PM

Nicole said…
That whole outfit is adorable and you look great!

The shower thing would also bother me. When I had my veins stripped, I think it was something like 48 hours that I couldn't shower or remove the bandages, and it felt really gross.
April 21, 2022 at 5:51 AM

Suzanne said…
This made me snort laugh: ""oh my god, just let the blood pressure take you"."

Also, I am really digging the idea of using geese as our sprit guides. They really and truly seem like they don't give a fuck about anything. They will just step right out into a busy road and take their time crossing, holding up four lanes of traffic without any sense of urgency or obligation at all. I need to be more At One With The Geese in my day to day life.

Busy Bee Suz said…
Oh my goodness. I hope all is well. I've done the heart monitor thing for a few days, but not this.
*deep breath* I'm hoping that is this NOTHING for you
Still, the jeans. So cute.
I never knew it, but I also have sensory things with my pants. Thanks for giving me a label...
Some of us can not go without a shower. It's real.
April 26, 2022 at 5:46 PM

Common Household Mom said…
Medical folks need to instruct non-medical folks how to use stuff like this.

My 88-year old aunt was prescribed an asthma inhaler, but nobody taught her how to use it. It isn't intuitive. Today I had to coach her long-distance over the phone on how to administer the inhaler. Oy.

That's good that you can shower! I loved your phraseology about your camping trip: "sponge-bathed comprehensively in the dark".
May 6, 2022 at 7:48 PM