Just Pretend It's Christmas, Whatever, Time's Lost All Meaning

I meant to blog again before Christmas. I enjoyed reading everyone's Christmas posts. It was good that I got so much of the house cleaned and did so much Christmas stuff early this year, because the Omicron wave started rolling in and my sister and her family couldn't come any more and the school where I work had multiple Covid outbreaks and I hit a pretty bad slump and stopped doing anything. When I tried to restart Christmas cards I couldn't find the list of who I'd already done, so I just didn't do any more - this felt totally wrong but I couldn't face having to try to figure out where to start again.

It was better once the kids got home and with the new rules in place we could still be with my mom and dad for Christmas. Eve would come downstairs and squish herself in beside me on the couch and Lucy would jump on us and it was the best thing ever. 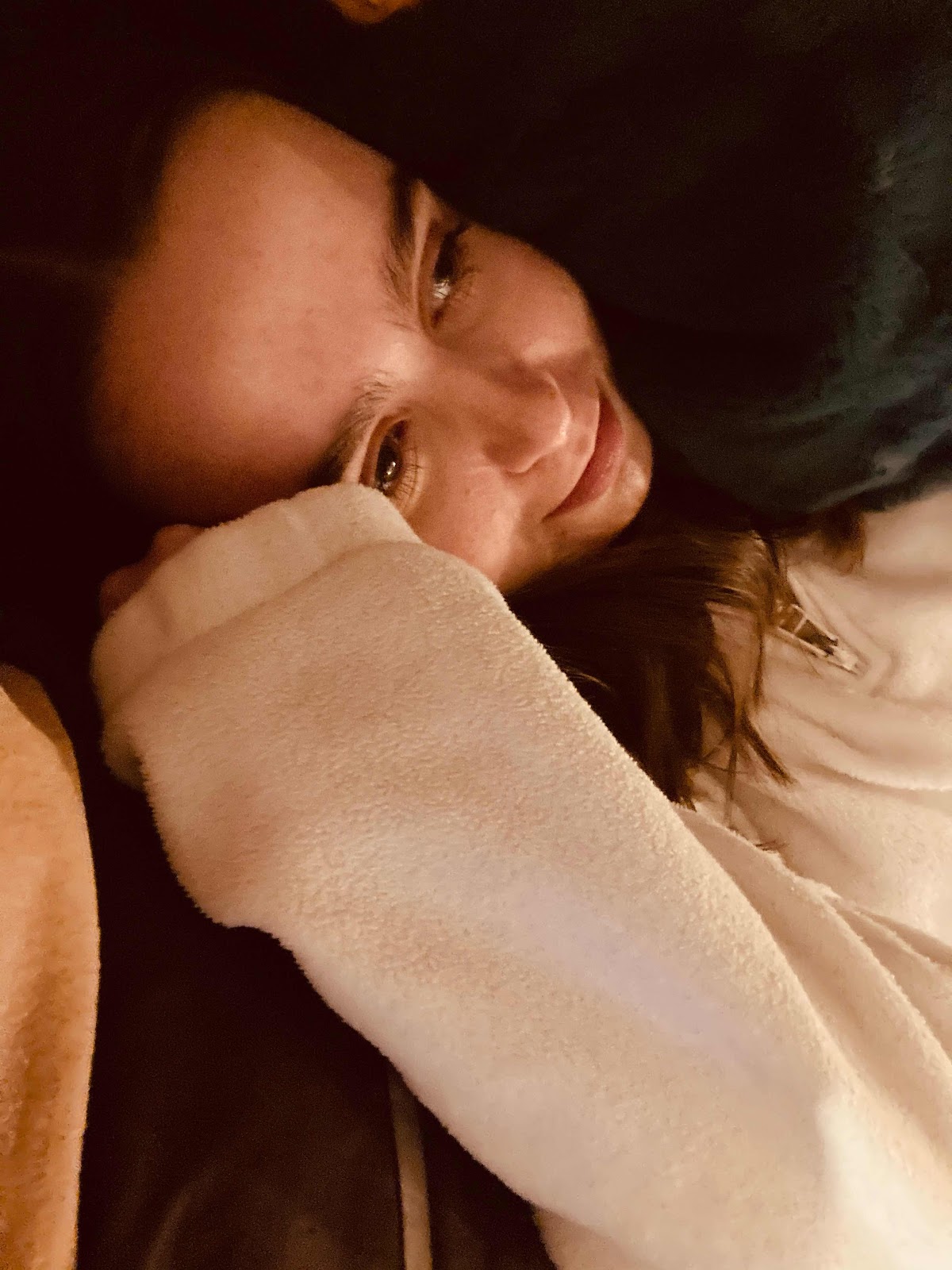 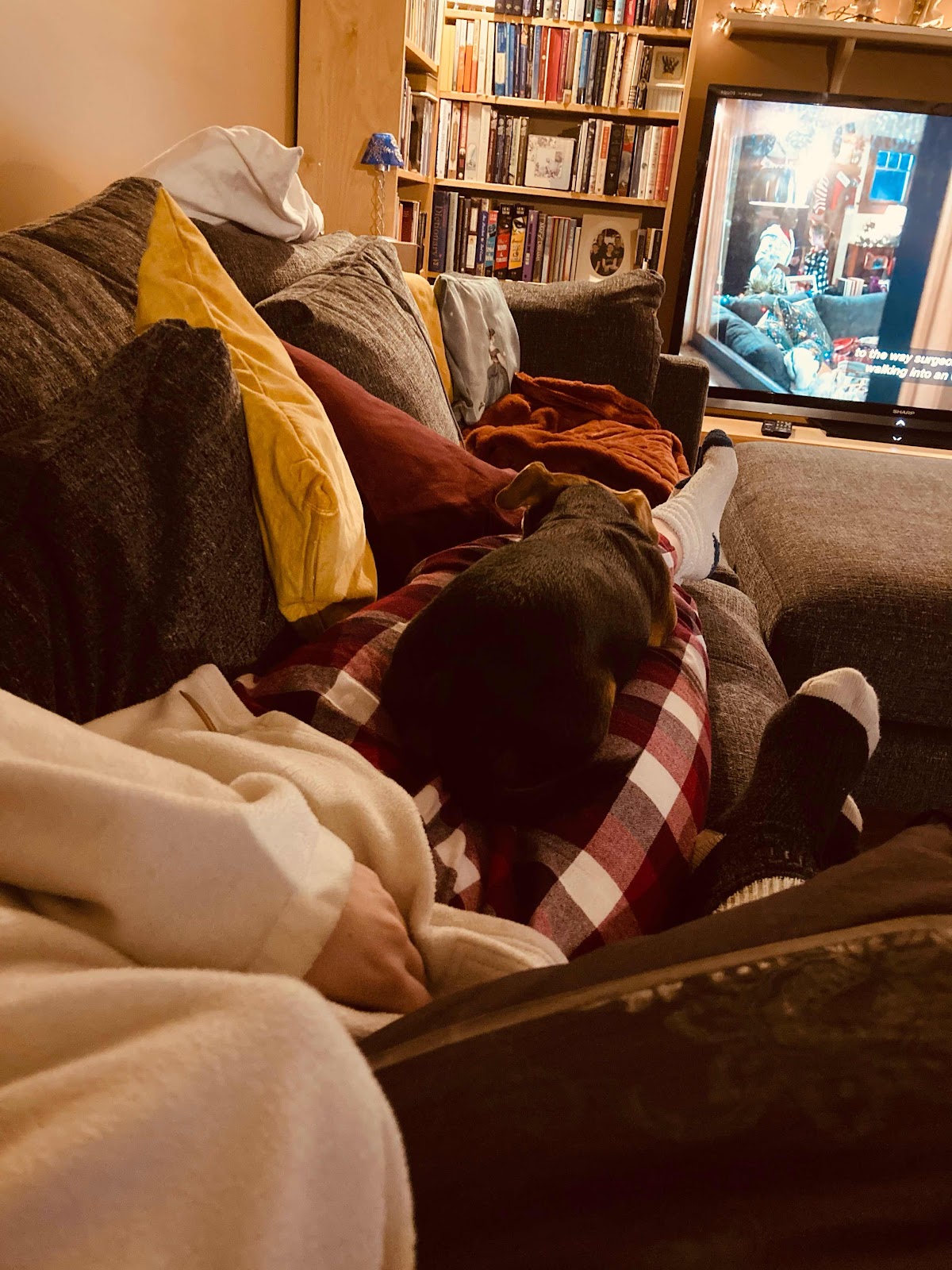 I always put the same Christmas decorations on the shelf above the television, and Matt winds a string of lights around them. Every year I think maybe I should change things up a little, but this year we were watching a movie and Eve said that was the exact scene she'd had in her head when she was at university and thought about coming home for Christmas, so henceforth this display will be identical to the millimetre. 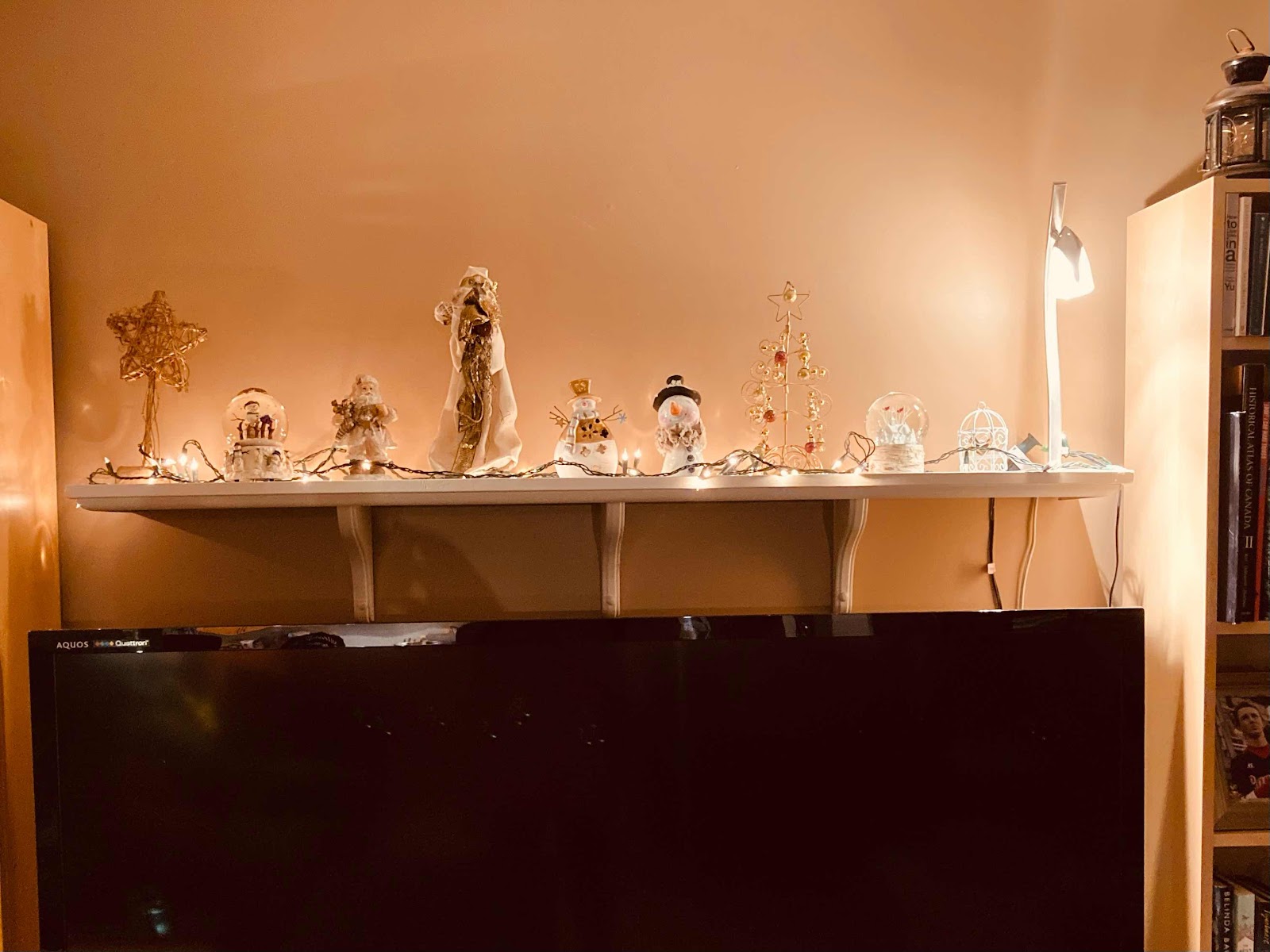 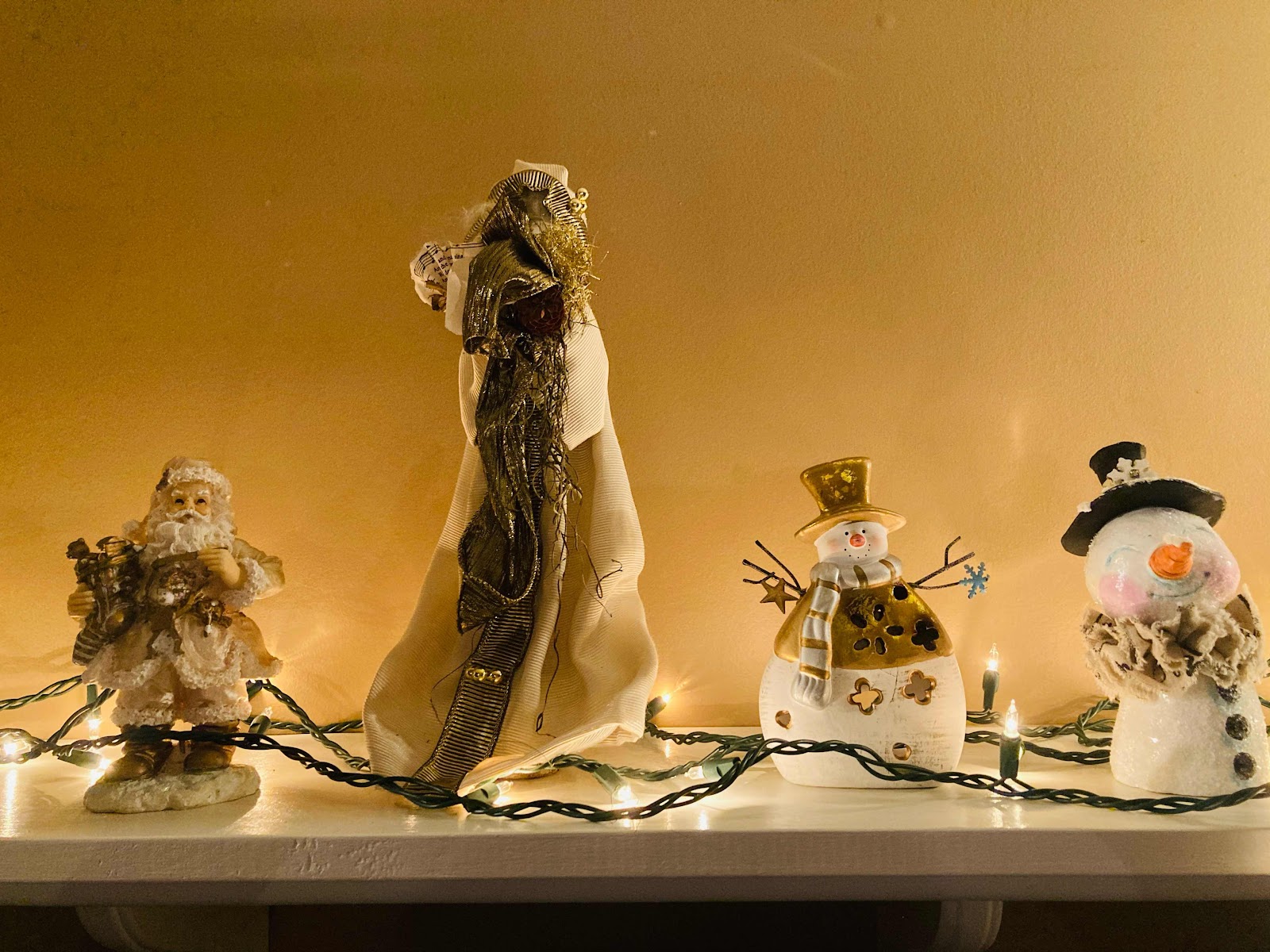 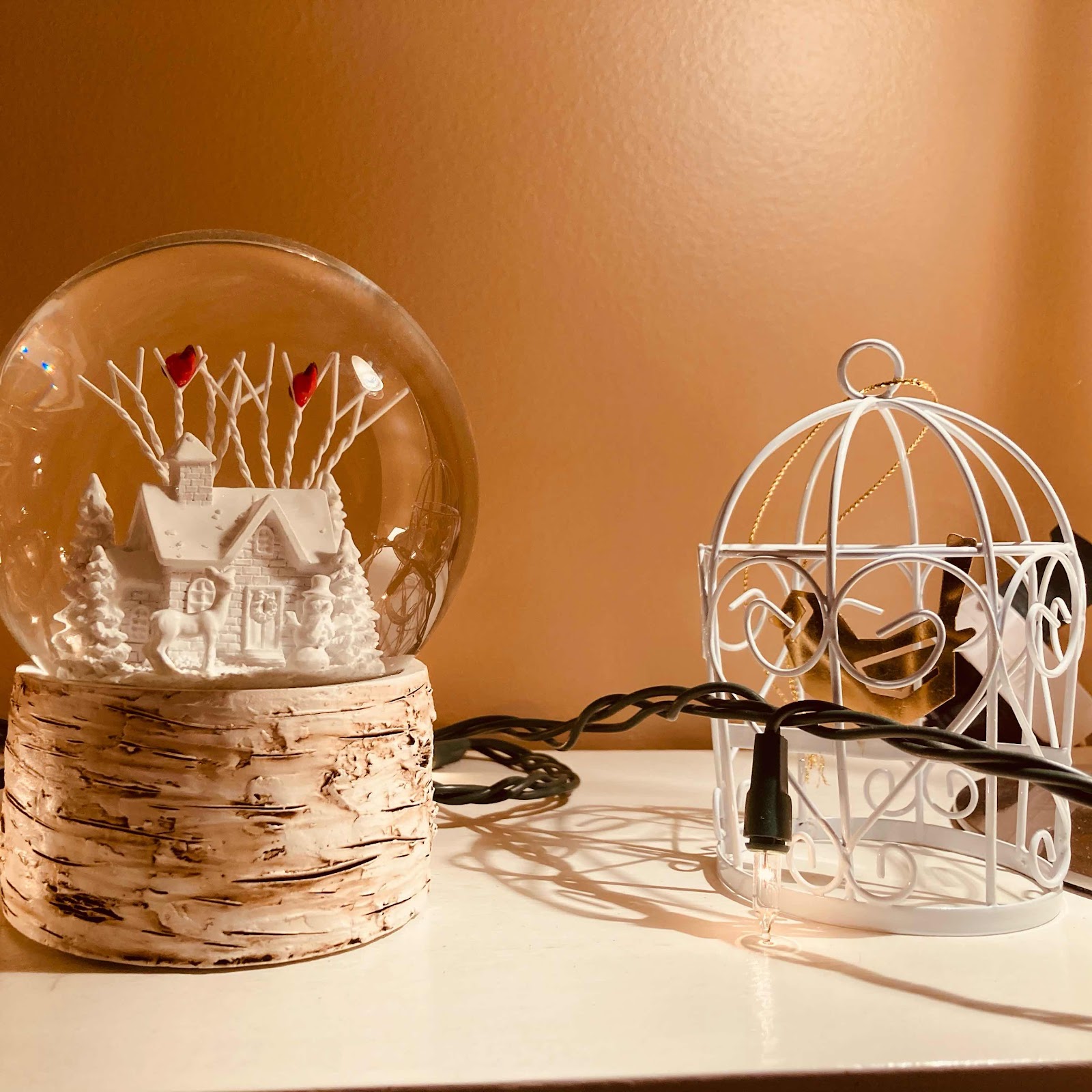 We FaceTimed with my sister and her bunch a couple of times and it was nice (once they were drinking and watching Office Christmas Party, which we were supposed to do here, dammit, but I didn't sulk for too long). The kids were still up for the annual in-front-of-the-tree photo shoot, which always makes me feel indescribably fortunate. The props were martini glasses, which Matt insisted on garnishing properly, but rest assured we did not let Lucy drink actual alcohol - it was just water. 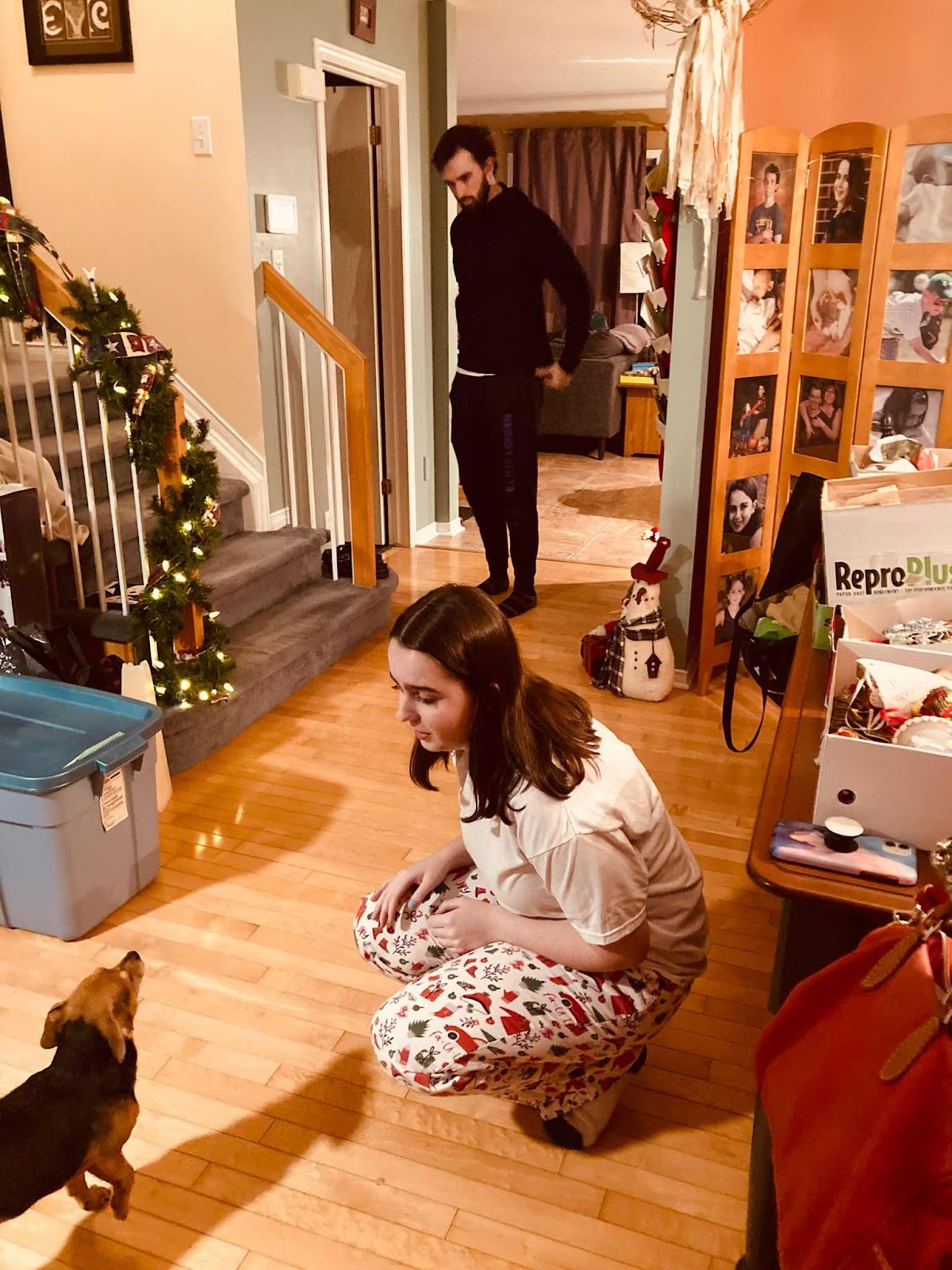 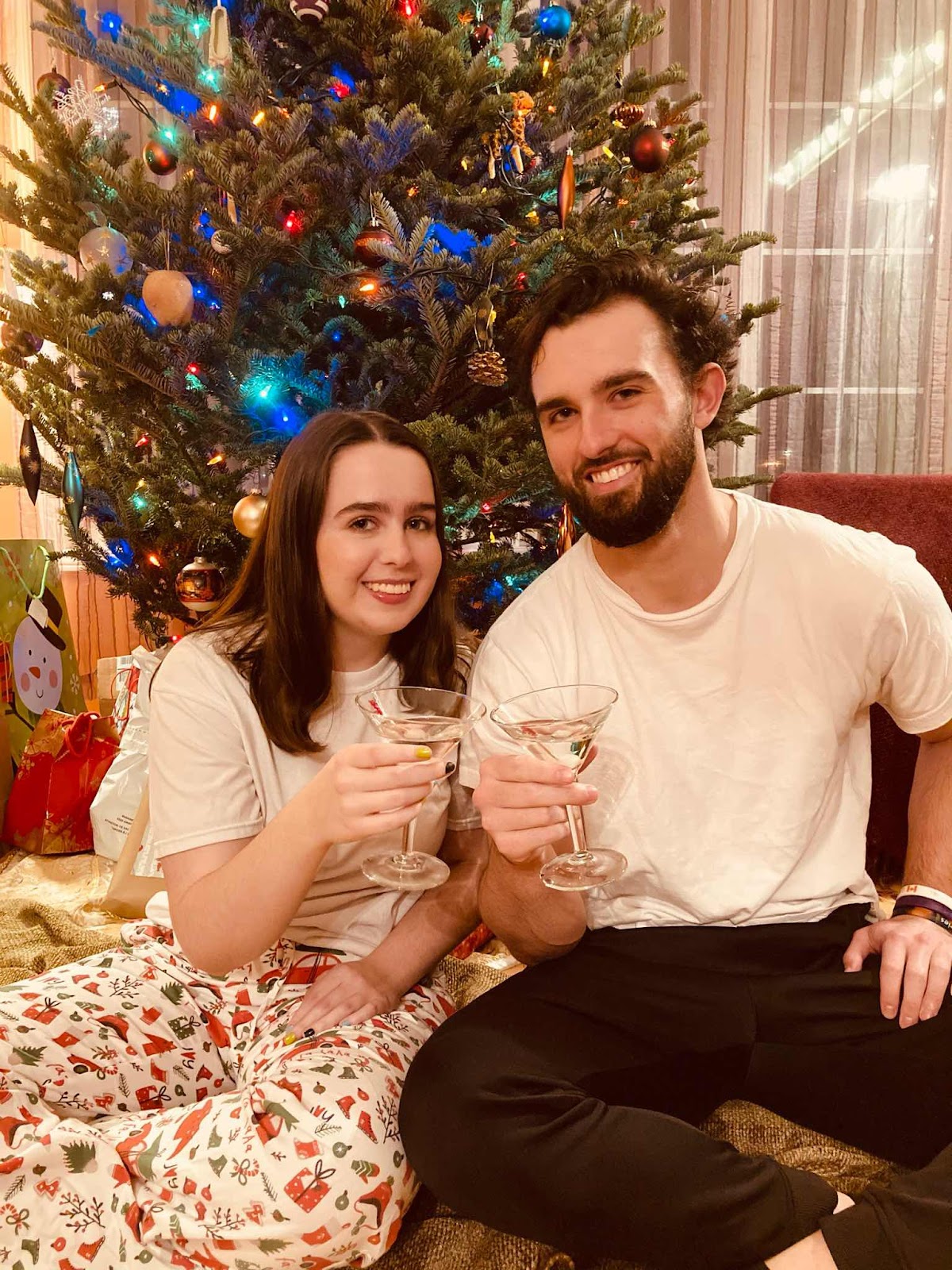 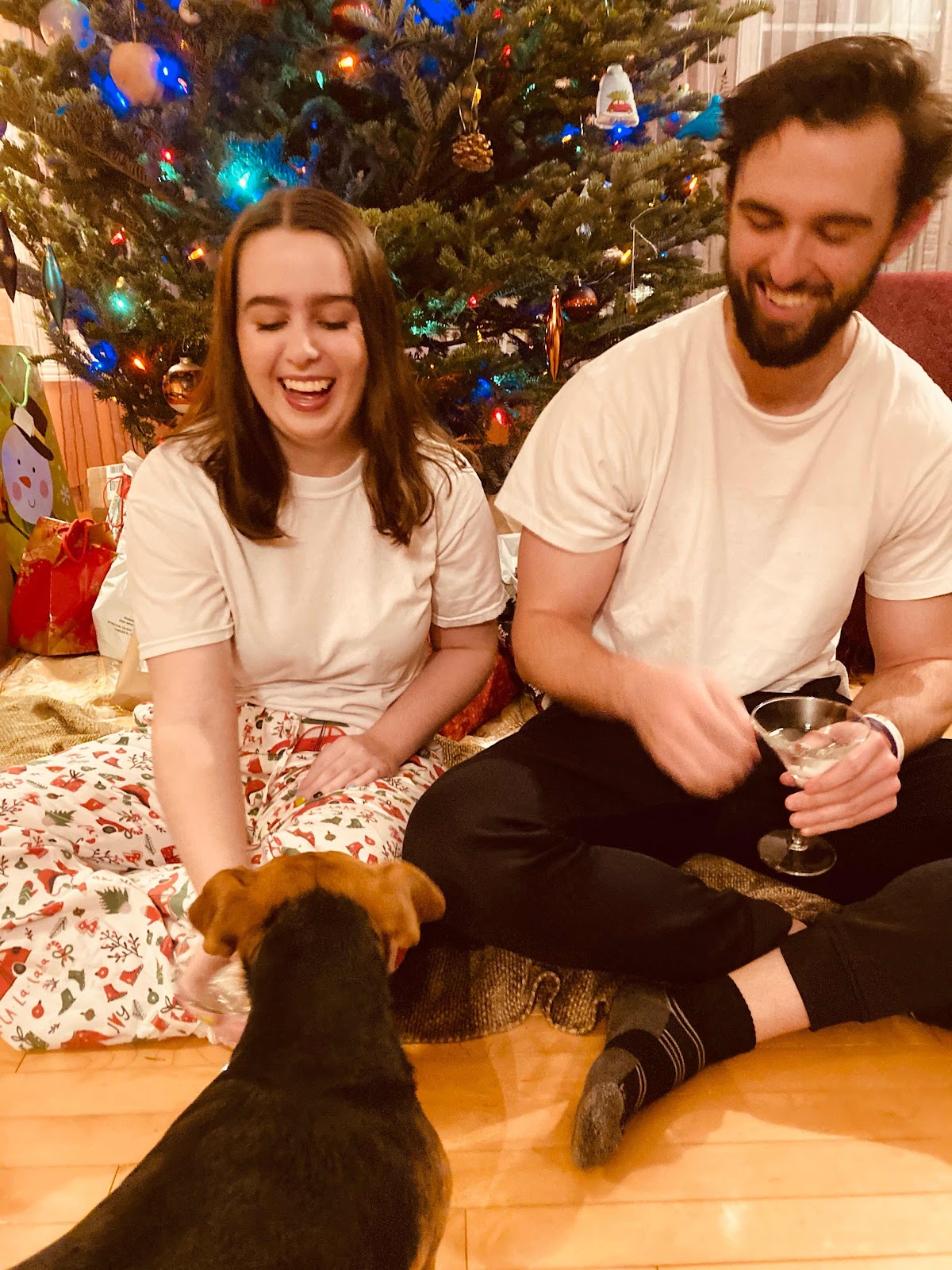 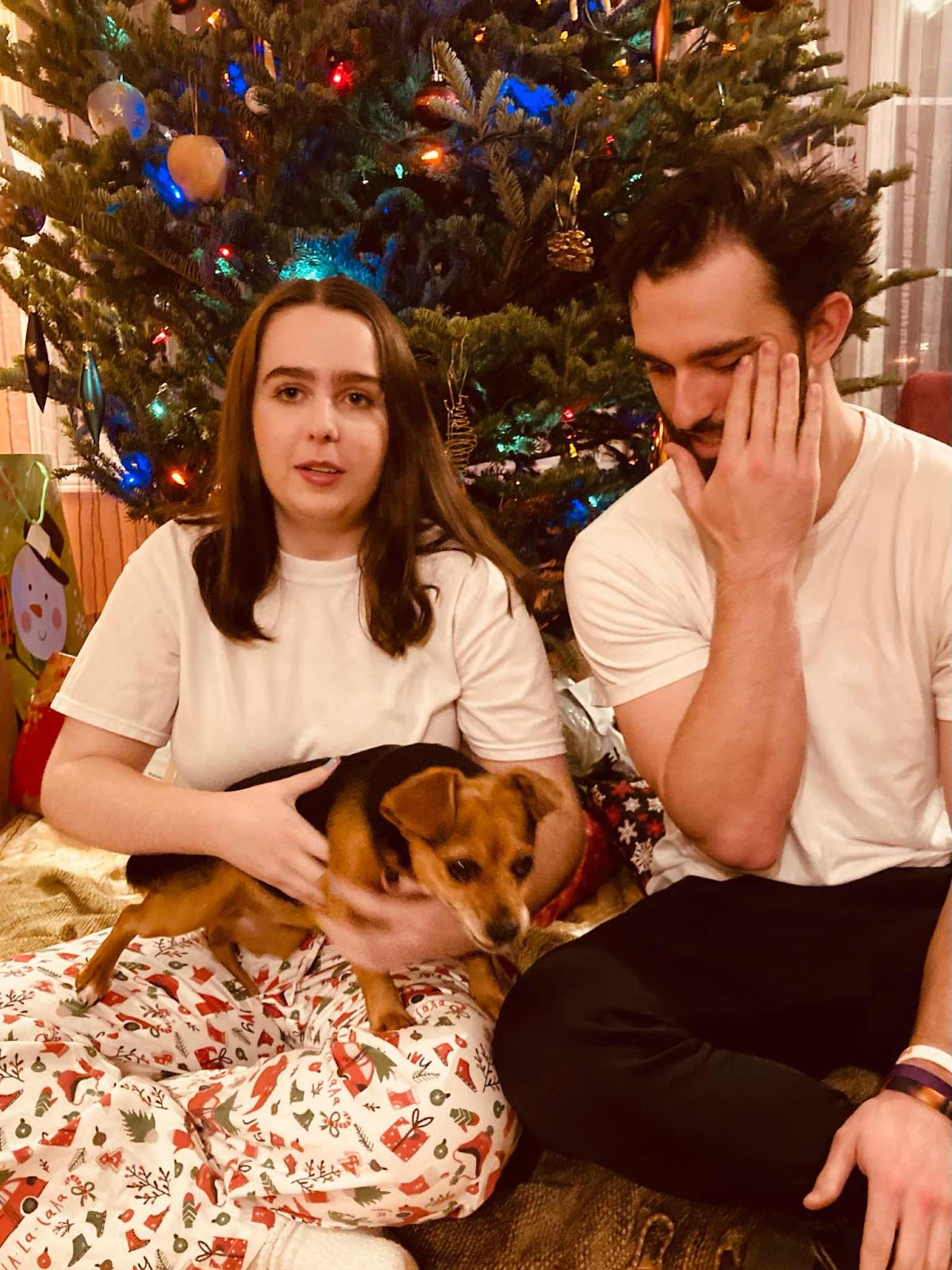 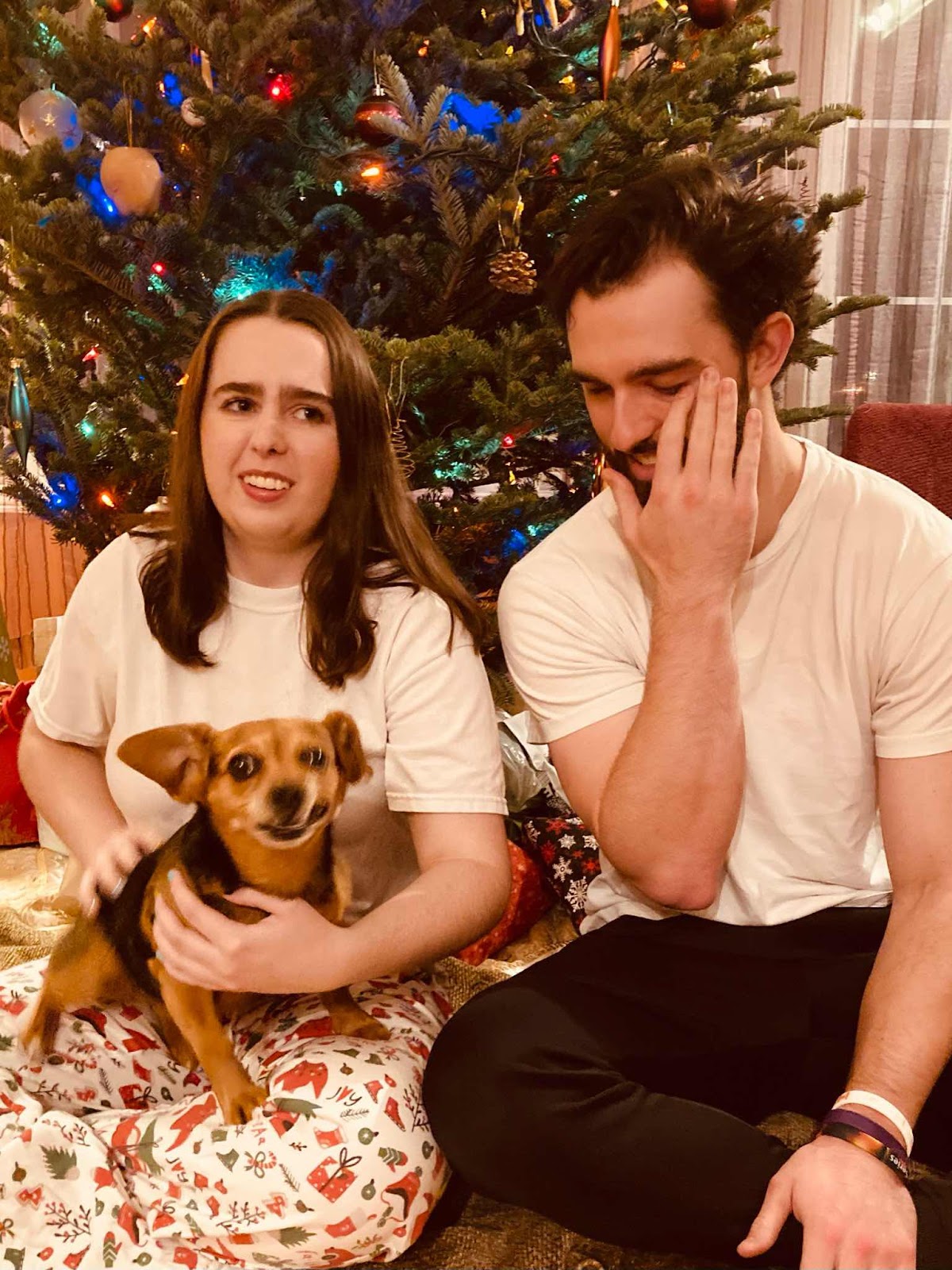 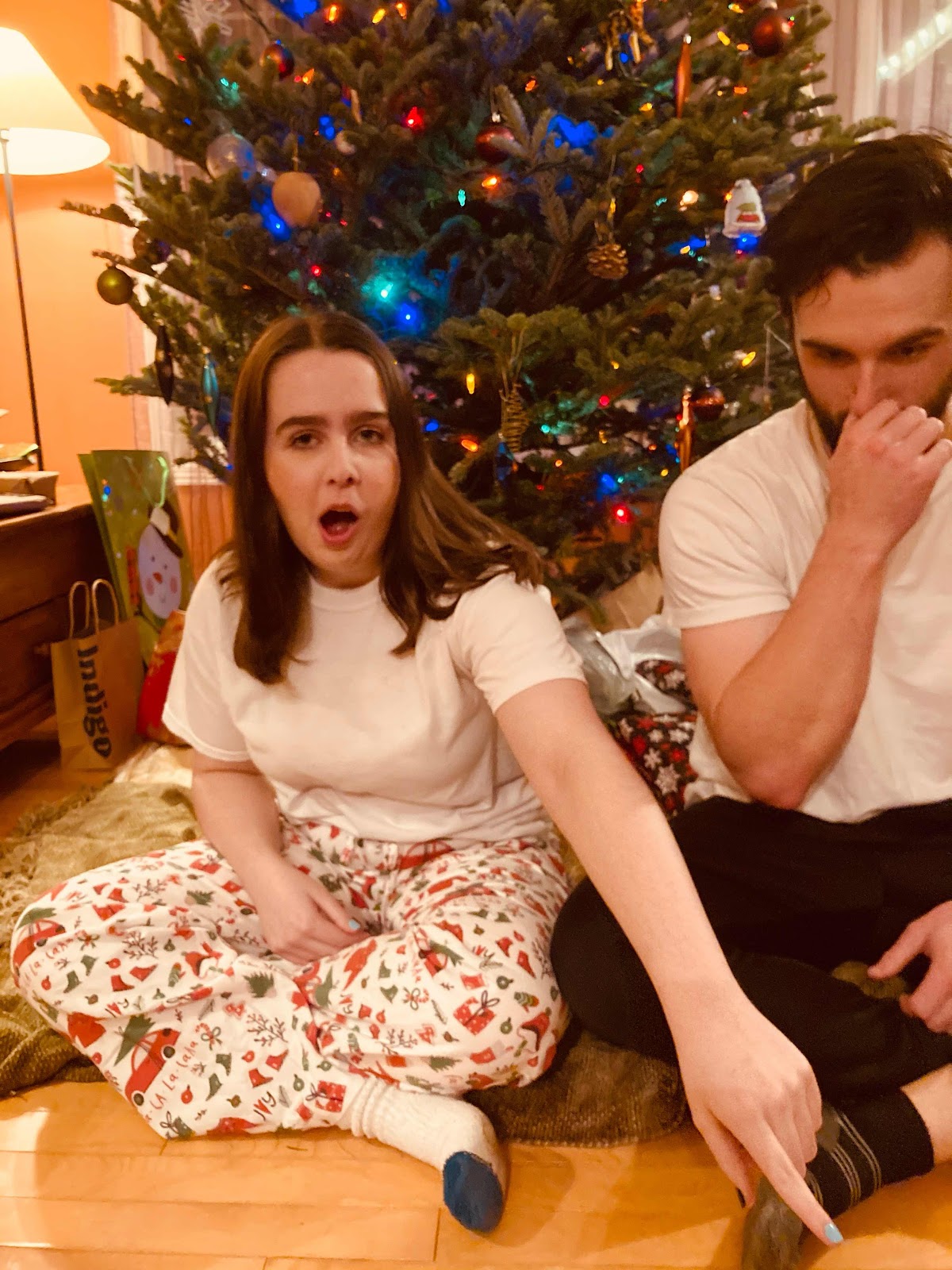 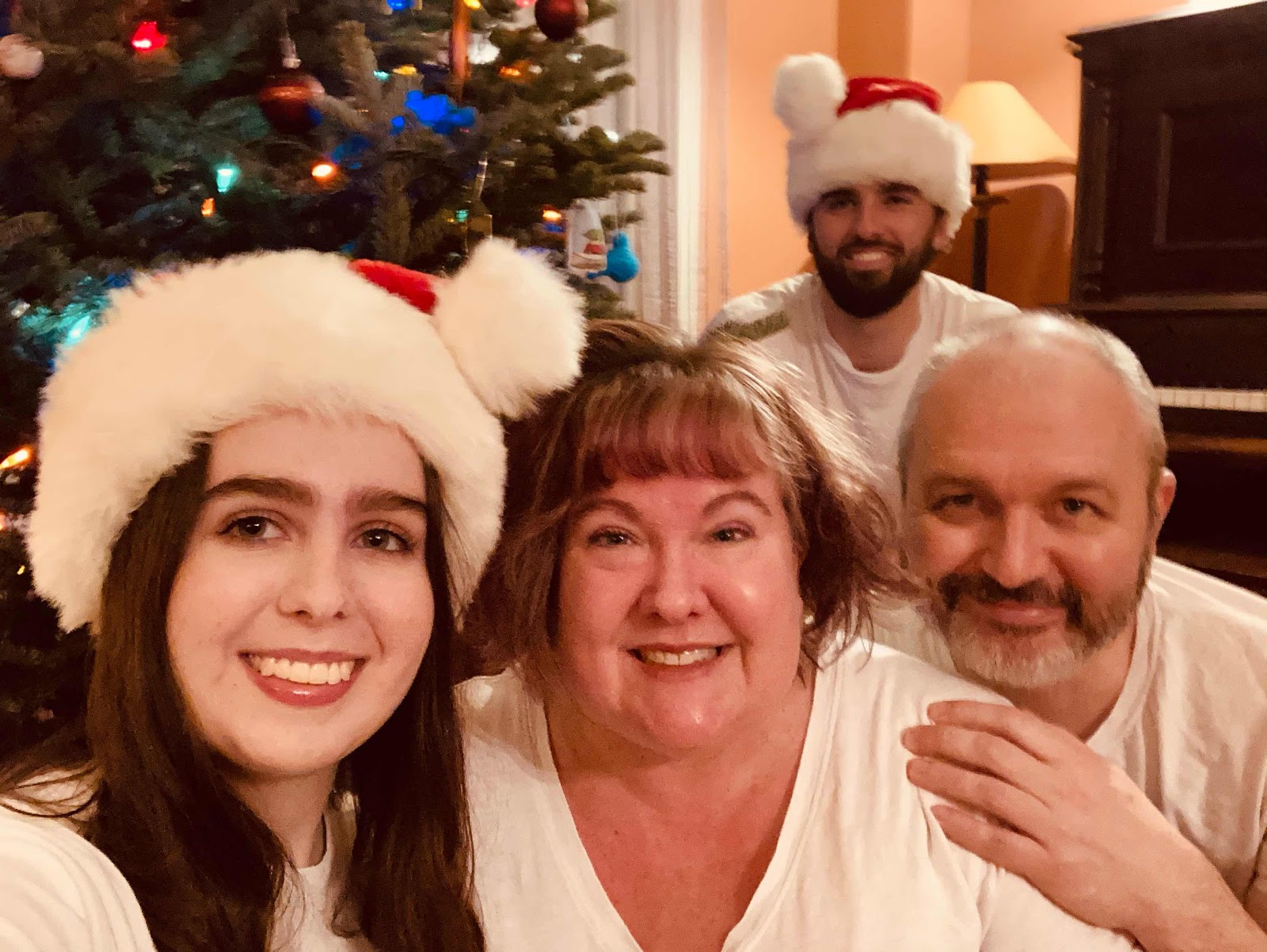 I got my Covid booster the 21st so I was pretty tired and achy for Christmas. Everything was nice but just felt slightly off. Christmas morning was still perfect - I had fun with the kids' gifts and they're always fun and funny opening everything. Angus had mentioned something called dorm flags, which I had never heard of, and when I looked them up a lot of them were incredibly offensive. I got a couple of funny ones and then this one which I couldn't resist - the kids used to play Club Penguin unceasingly when they were little. I didn't know if he would find it as hilarious as I did, but he said it's the first one he's going to hang up. 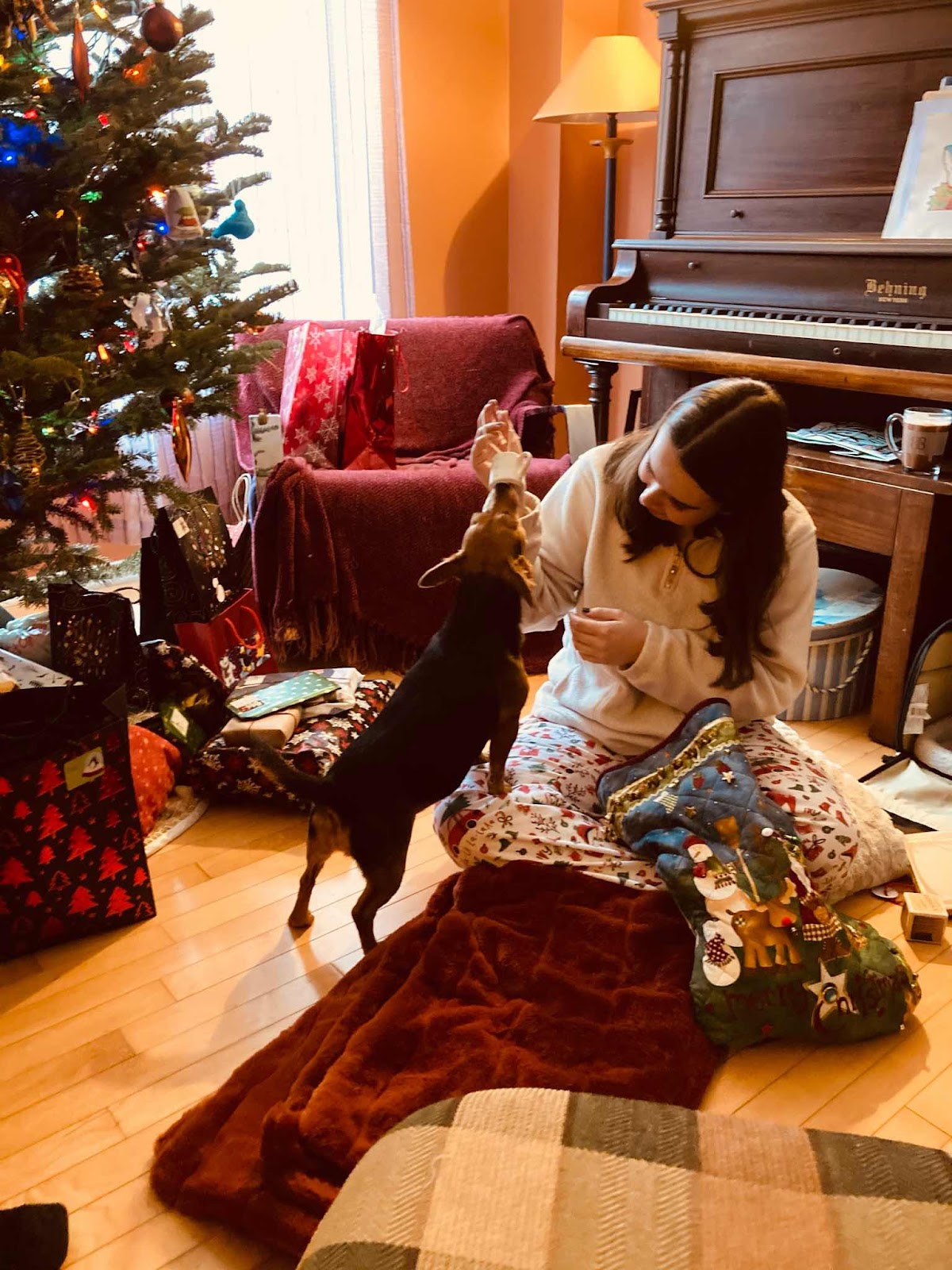 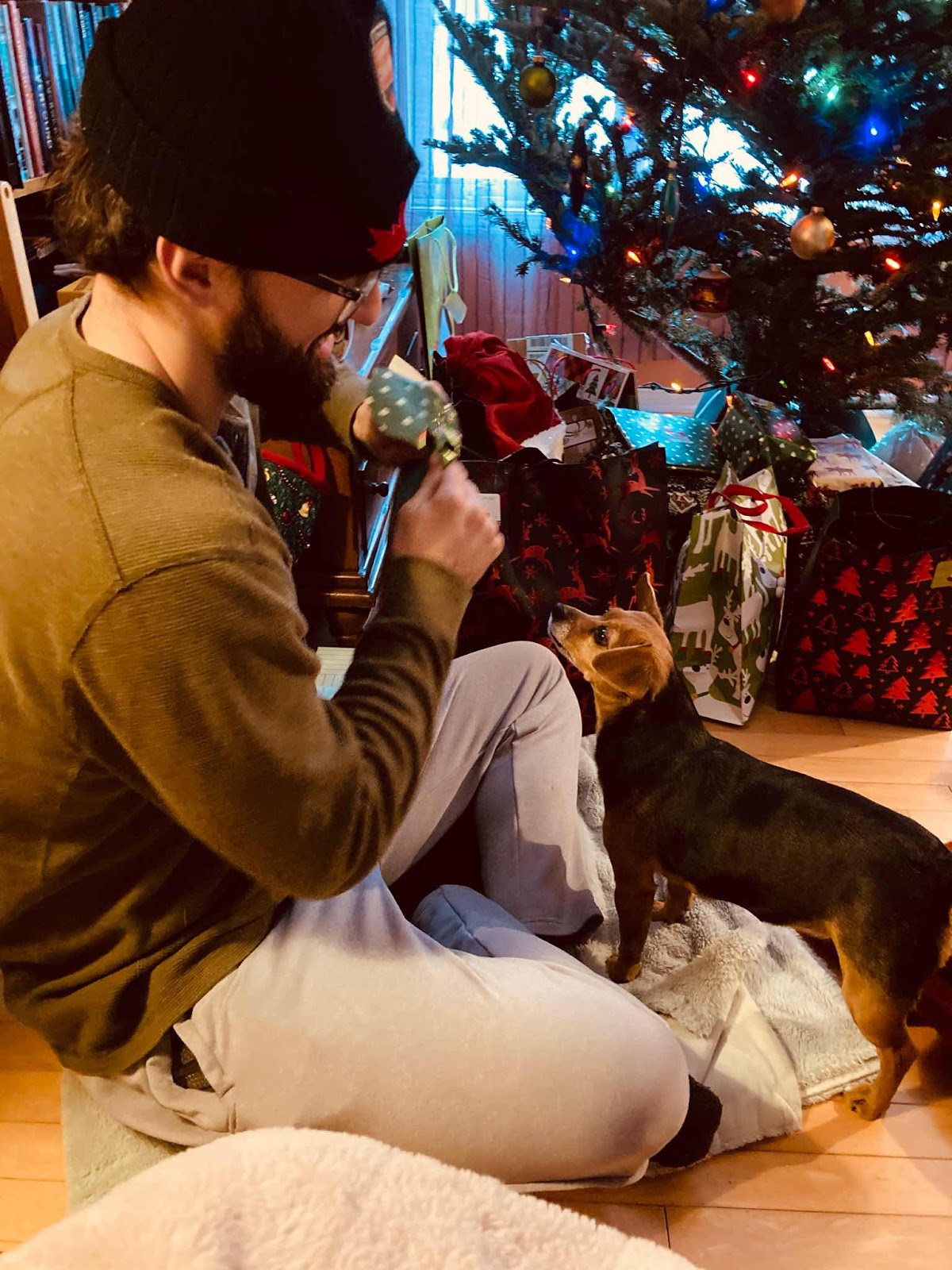 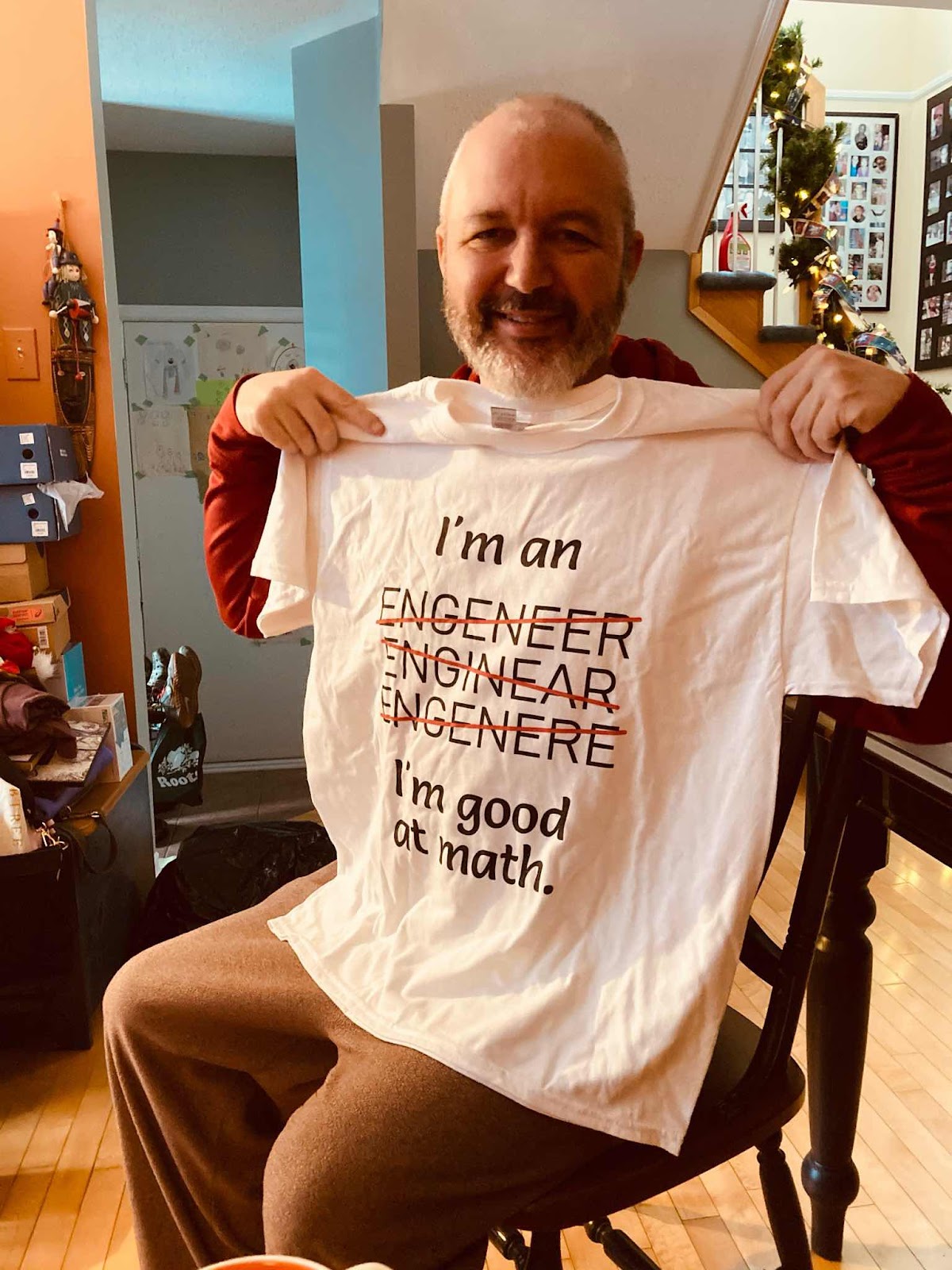 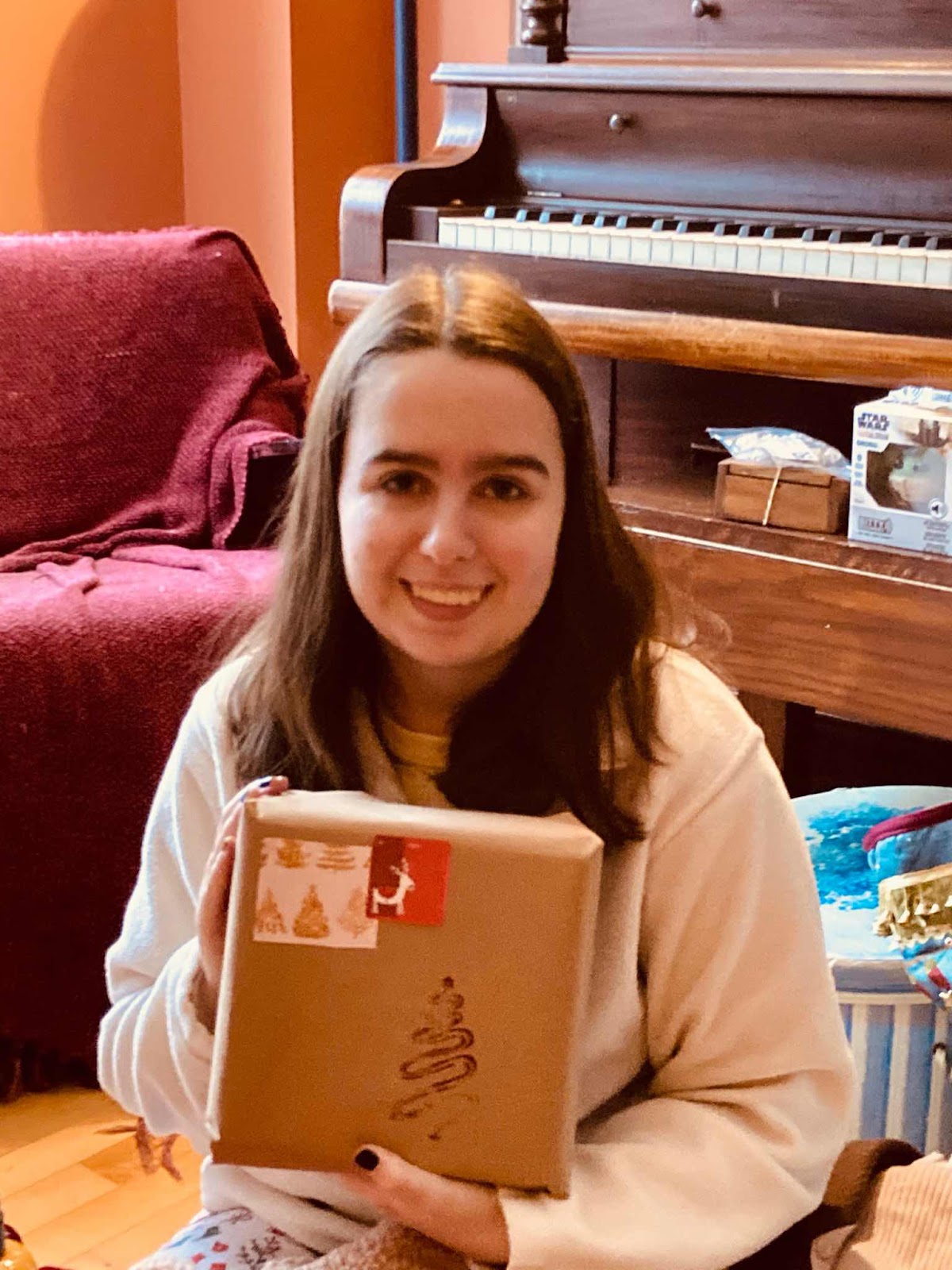 Angus got me a really pretty bottle of tequila! 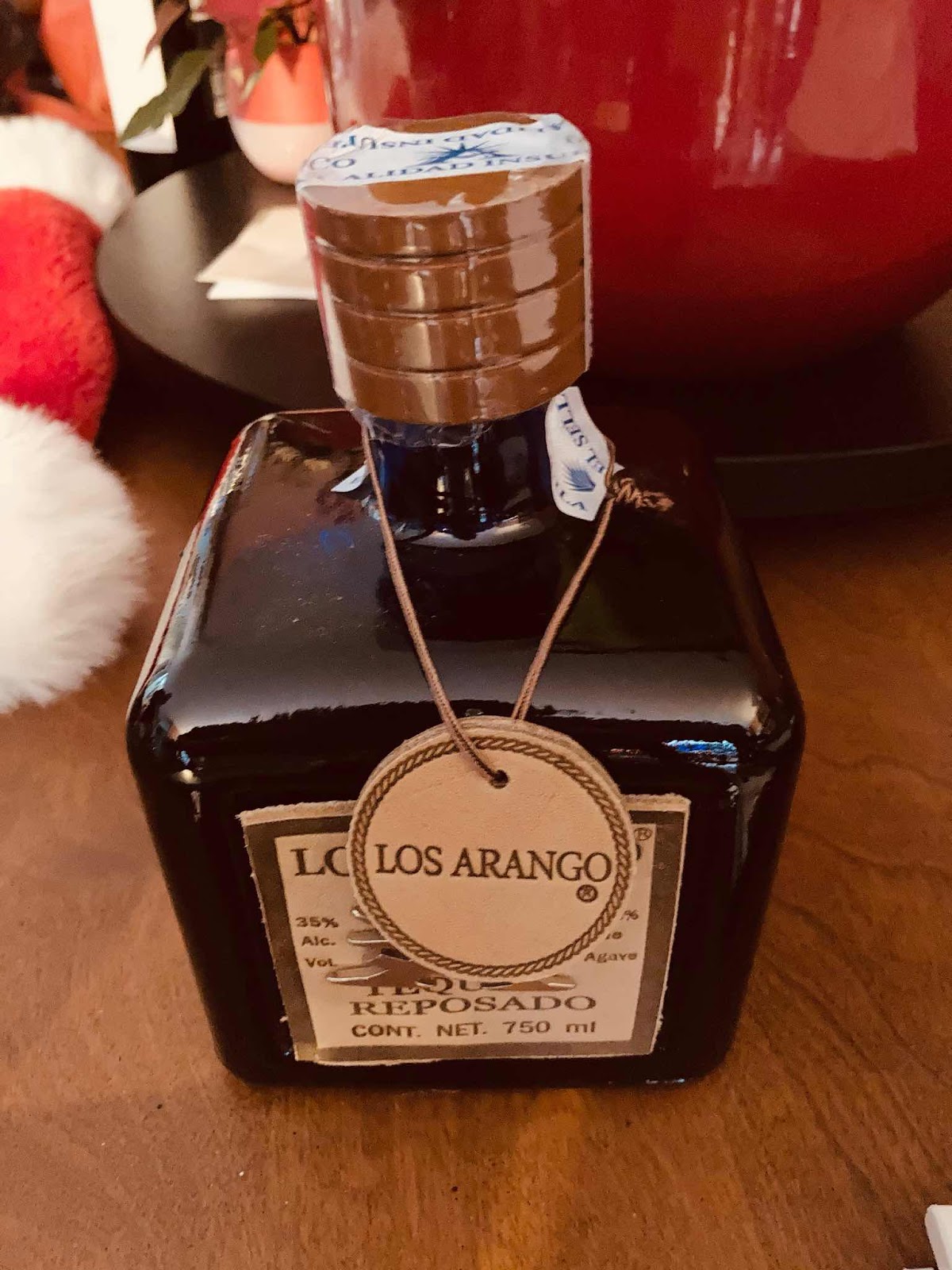 These were my mom's favourite gift: 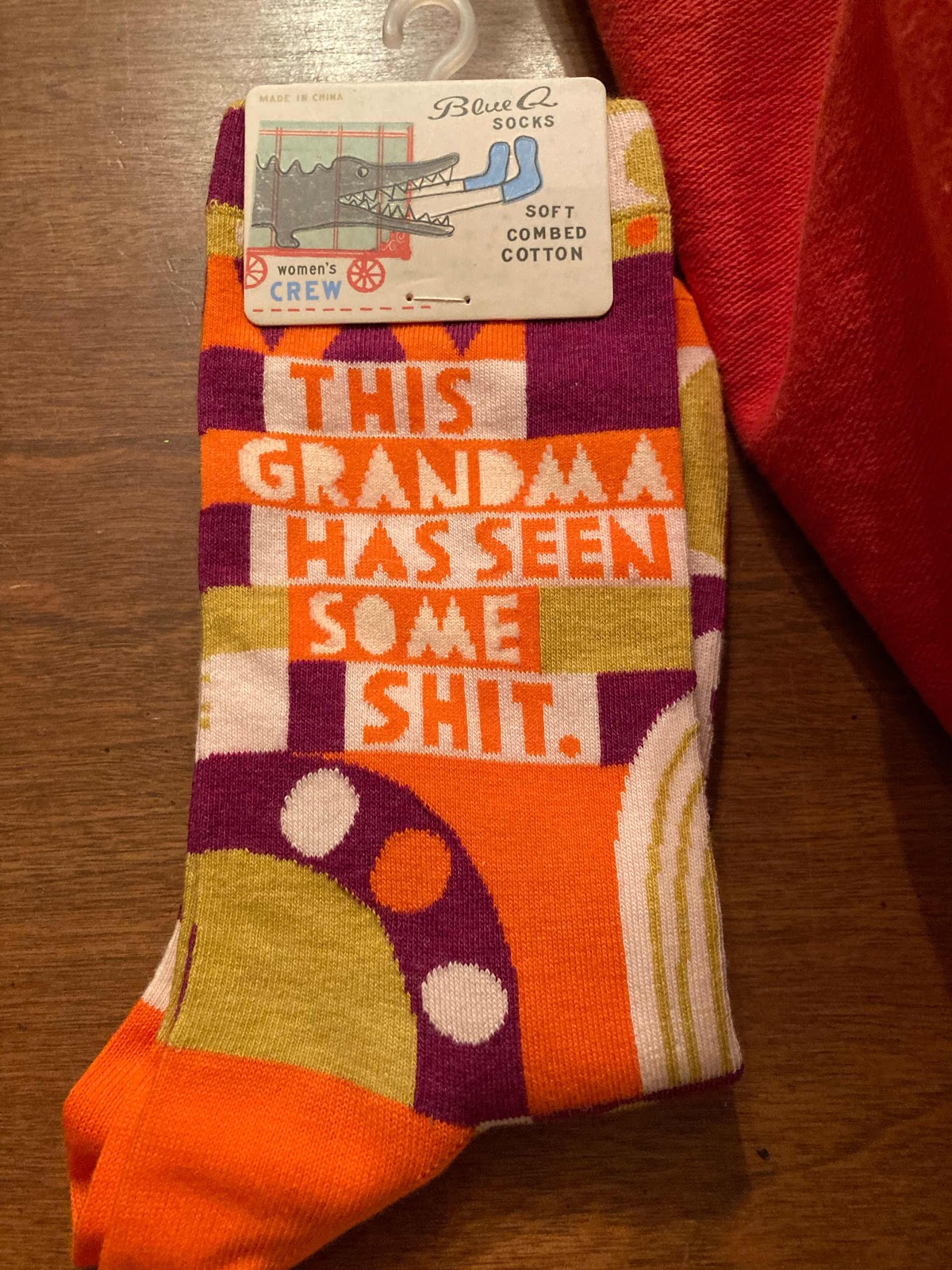 Matt did the turkey, because the last couple of years I have basically used up all my bodily resources by Christmas Eve, and I stumble through Christmas morning and breakfast with my parents and then I have a heavenly Christmas nap. 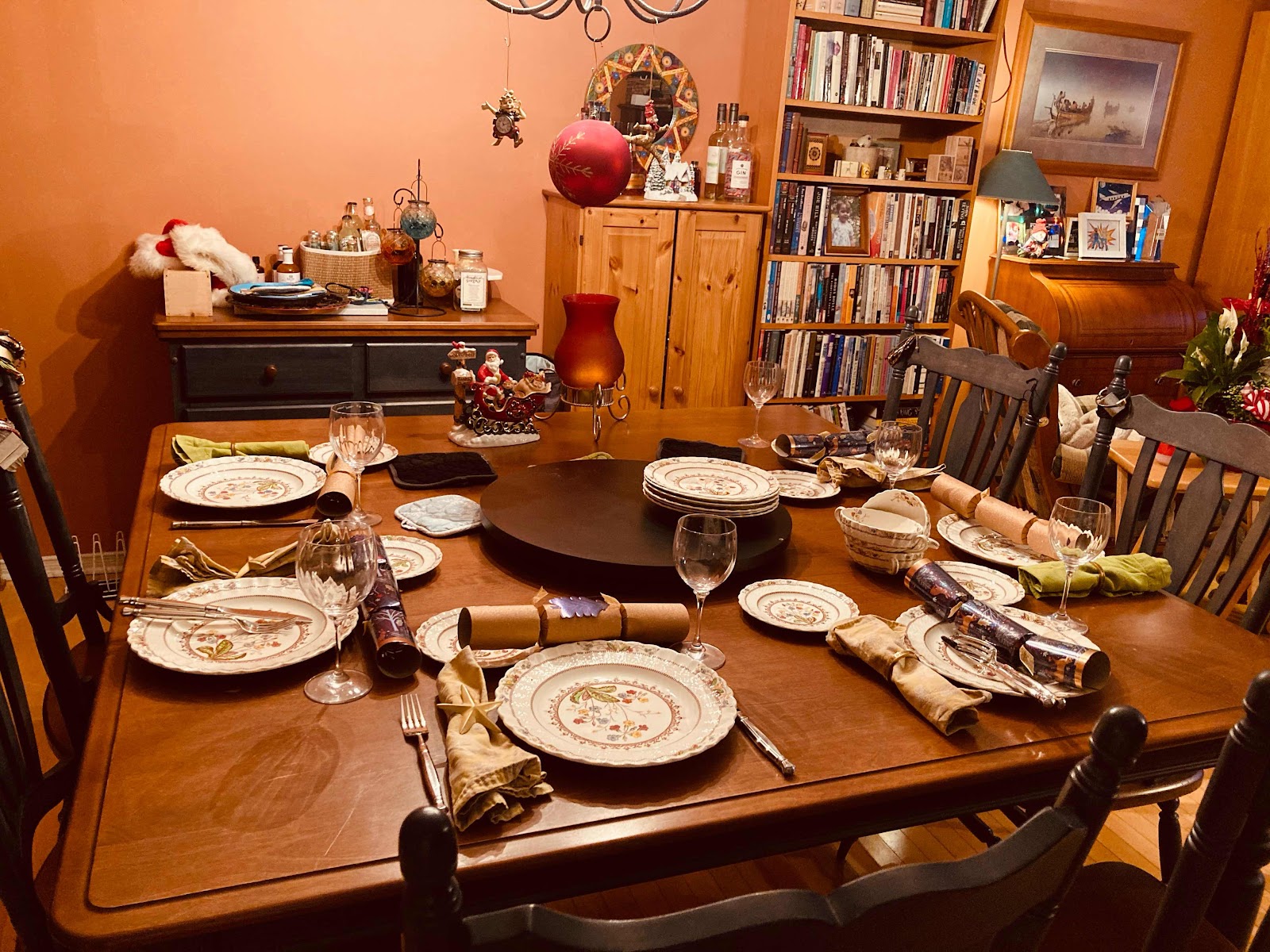 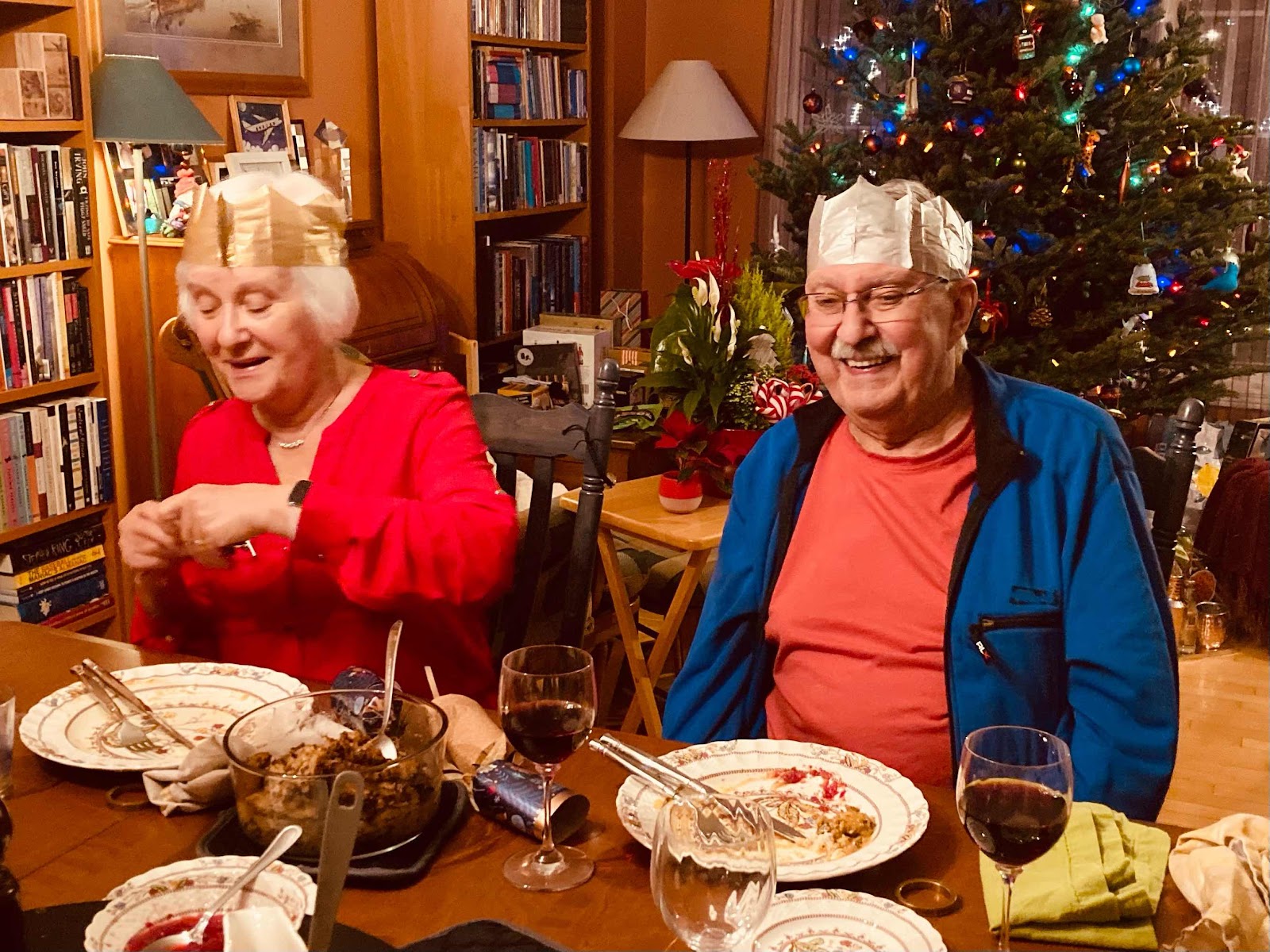 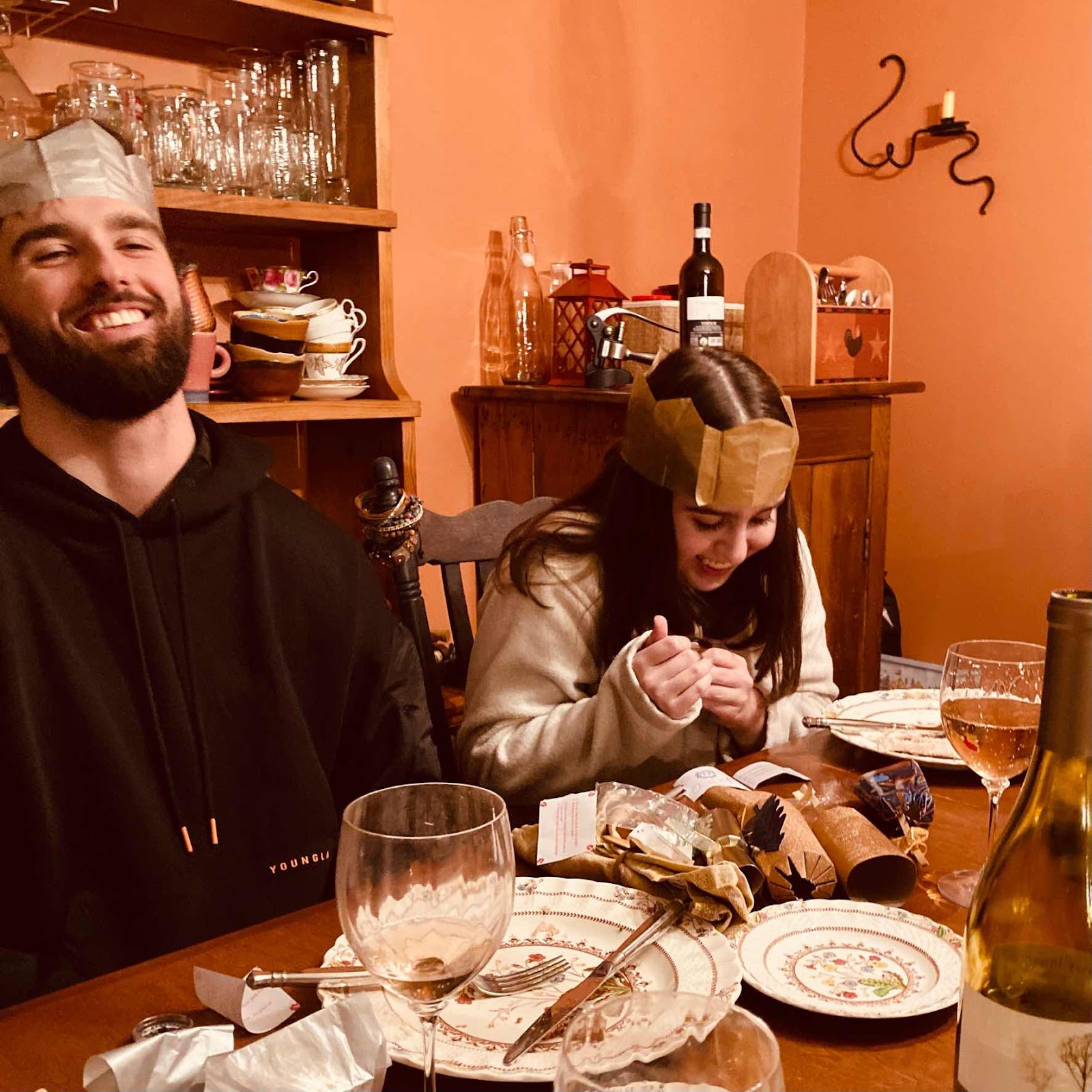 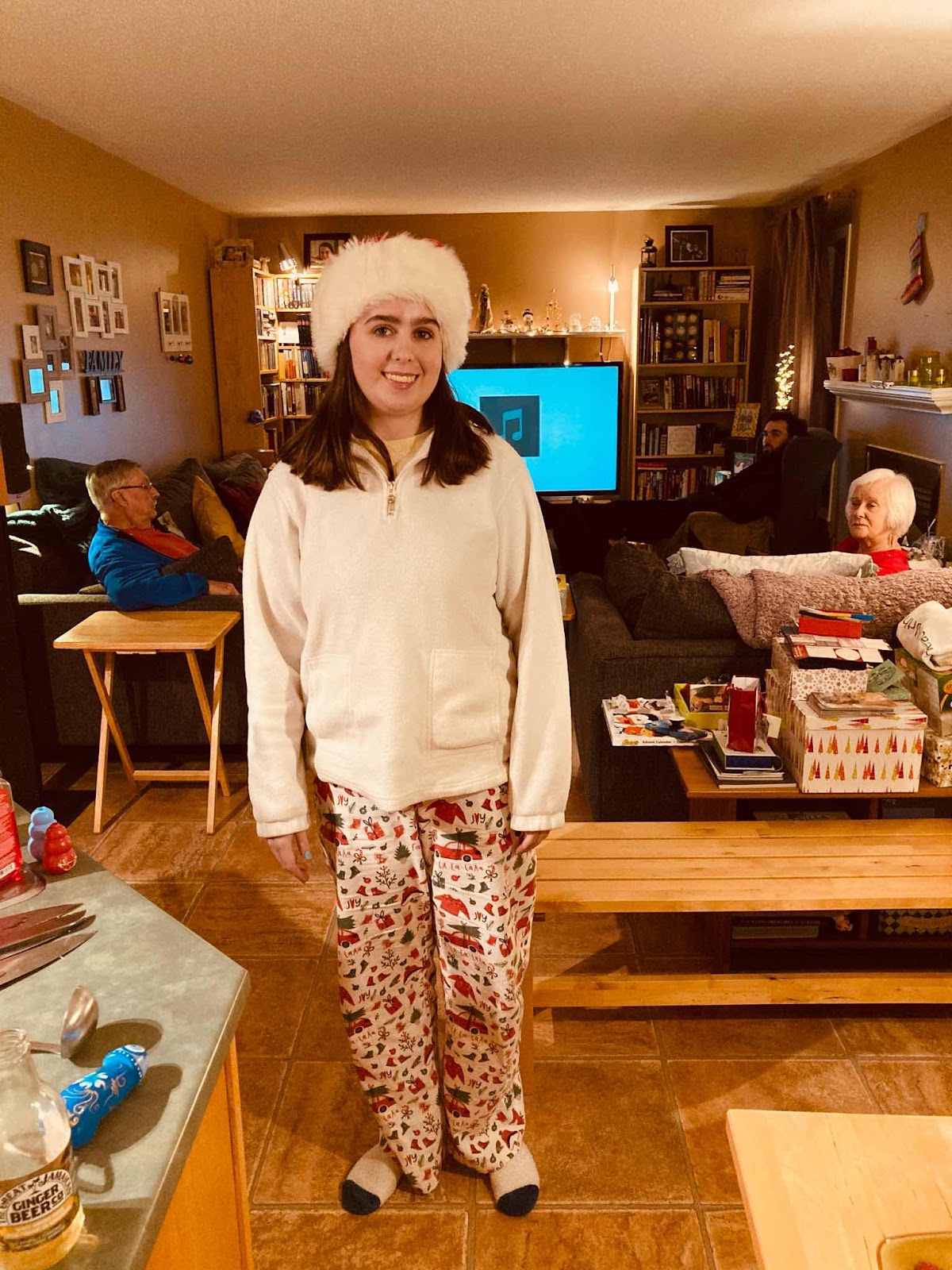 That fleece that Eve is wearing in that picture? She wears it constantly. I actually got it from a clothing exchange a few years ago at Zarah's place (HI ZARAH). I would have thought four or five years tops. Then this picture came up in my Facebook memories: 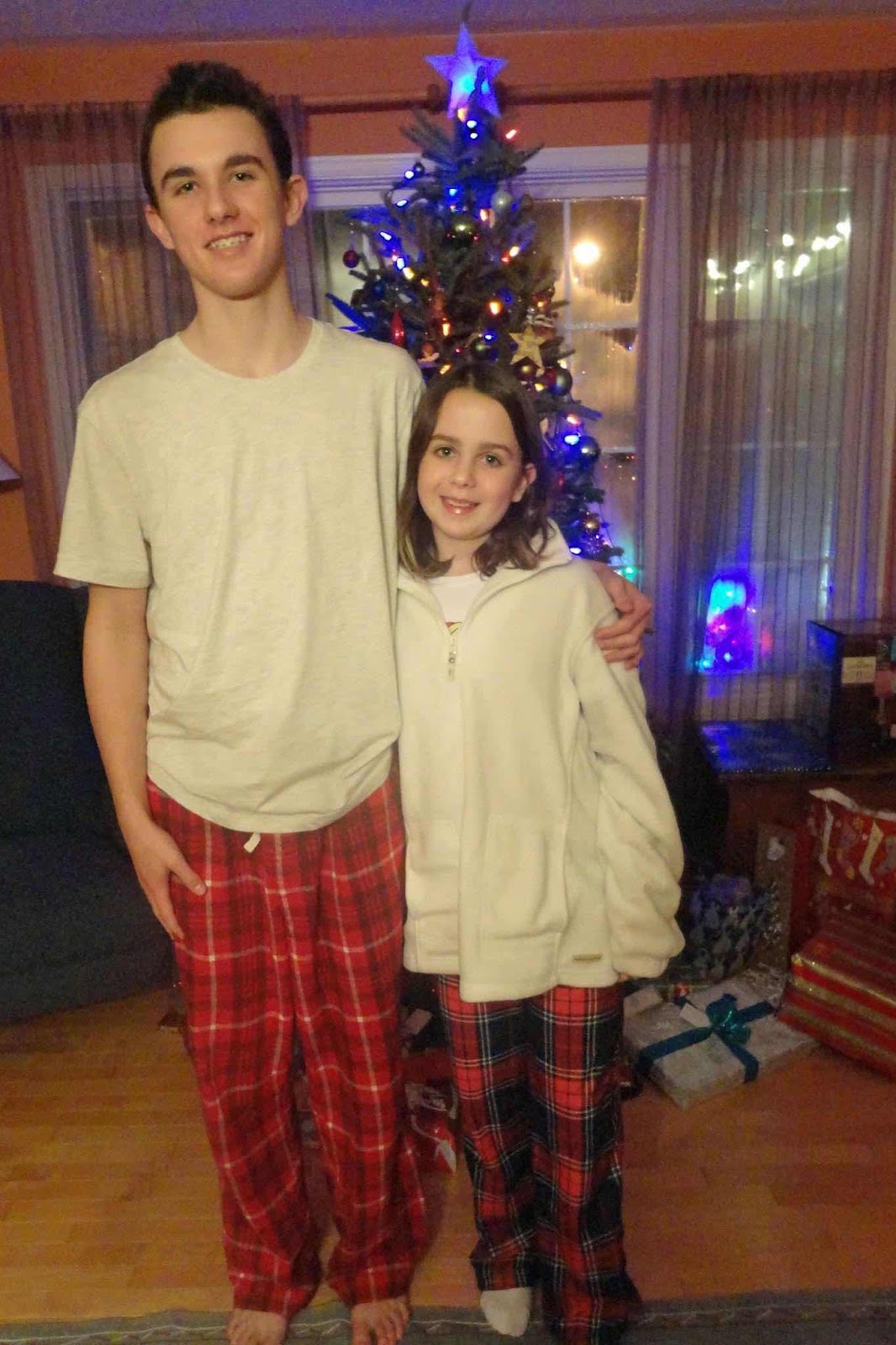 EIGHT YEARS AGO. EIGHT. And it wasn't new when I got it! And it's still her favourite shirt and she gets compliments on it. 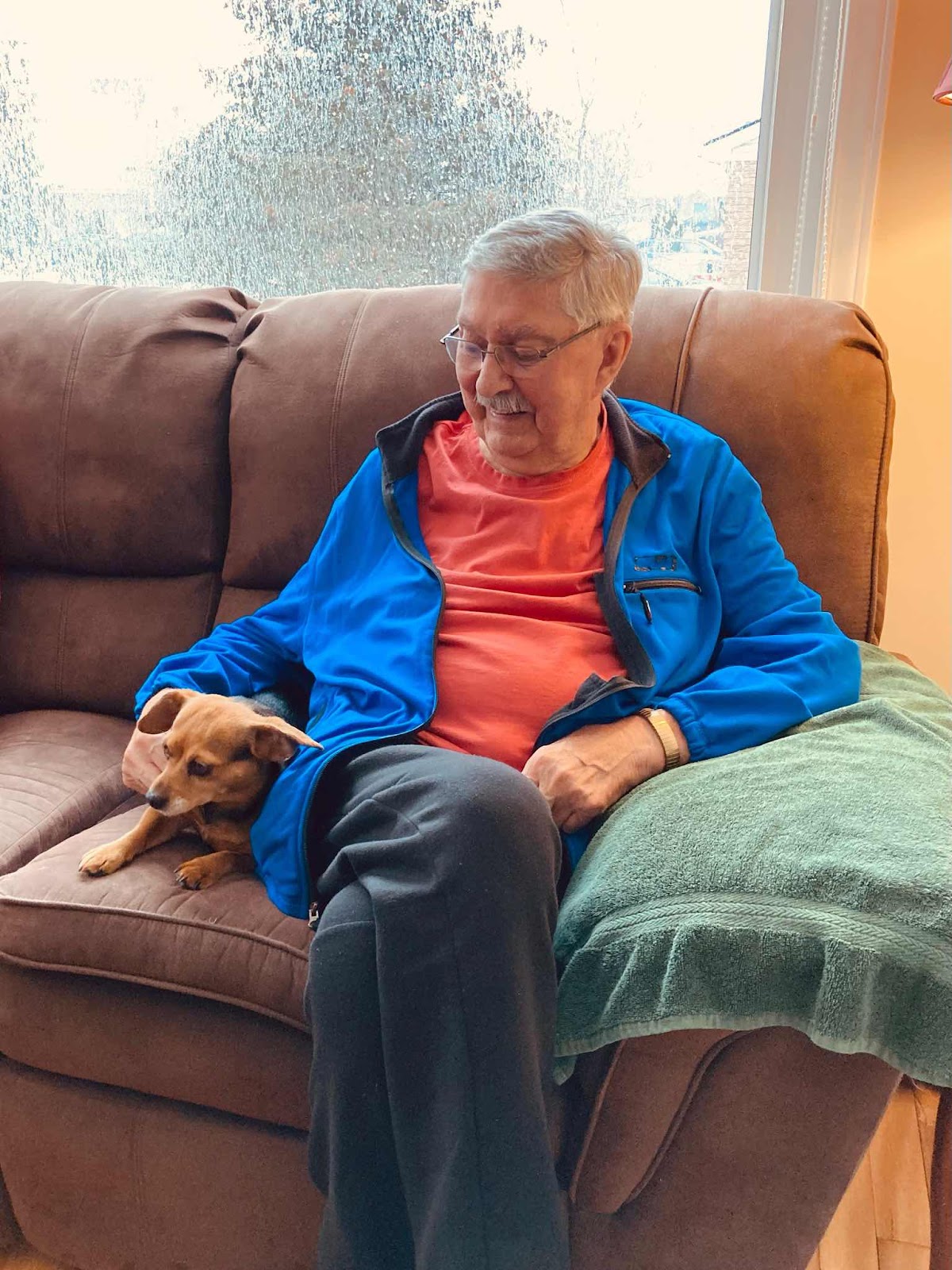 I got some time with the people I love. I have both my kids under my roof. I had a good fall. It sucks that things are bad again, but they're not AS bad, and things were better before that. We might just all have to remind each other of that a few times.

I am organizing my book review posts for the next few days while rewatching The Golden Girls. Eve is reading Brave New World for next term. One of us is definitely having a better time.

Nicole said…
OMG MATT'S SHIRT. I spit out my coffee.

Swistle said…
This was my favorite part: "Angus had mentioned something called dorm flags, which I had never heard of, and when I looked them up a lot of them were incredibly offensive. I got a couple of funny ones and...."

I was feeling empathetically sentimental about how grown your kids were, so I was NOT PREPARED to be suddenly shown a picture of them eight years ago!! I did NOT cry, but only because I was stern/incredulous with myself.
January 5, 2022 at 5:01 AM

Ernie said…
Love this. Love the grandma socks and I wonder if they have a 'nana' version. My mil is 'grandma' but I don't think she'd appreciate them. The sweatshirt with 9 lives and still going strong is awesome. Oh, that sweet, long-ago photo. A few of my kids agreed to do something silly/act out a gift that wasn't here on time while on my folks' patio while being photographed. I was grateful to still have a few kids on board with doing as I asked. I will have to share it in my upcoming Christmas Bloopers post, if I ever have time to write it. That dorm flag was funny. I bought the boys tapestries for their respective dorm rooms last Christmas. Both were from the movie Step Brothers. One said 'WE'RE HERE TO FUCK THINGS UP". When we visited Ed at college with H and L in tow, I sort of stood in front of the tapestry in order to shield them from bad language. Coach was like AND YOU BOUGHT THAT. I was like, YEP, AND IT'S STILL AWESOME, JUST HAVE TO BE CREATIVE IN HOW WE POSTITION OURSEVLES IN THE ROOM WITH THE YOUNGER CROWD.
January 5, 2022 at 8:25 AM

Suzanne said…
What great photos and it sounds like such a lovely, cozy Christmas!
January 5, 2022 at 8:40 AM

Common Household Mom said…
Sounds like a lovely Christmas, although I understand the disappointment of not being able to carry out plans for far-flung family to get together. That happened to us, too. And Christmas Day naps are The Best.

I'm sorry you're feeling down now. I am, too, truth be told. My Christmas was nice, but it seems like a long time ago already.

We've had two snow days and a 2-hour delay this week, but more importantly, Omicron is wreaking havoc on our area and I'd be really surprised if the schools don't go remote and soon. I won't even be able to complain if they do, it's probably the right move.

I am also enjoying having everyone under the same roof but at the same time hoping Noah gets to go back to school on time or close to it.
January 6, 2022 at 7:35 AM