There was a time when I would have killed myself making sure I posted something every single day in November, even though I was driving a lot and visiting my YOUNGEST CHILD who lives FIVE HOURS AWAY NOW and only had my phone with which to ply my trade with fat clumsy fingers. That time is not now. I figure everyone will either forgive me or be glad not to have to muster yet another comment.

When I visit Eve I stay at a very basic, pretty cheap hotel very close to campus. I like getting a room on the very bottom floor because those rooms actually have two doors, one that opens right to the parking lot so I can back up, open the door and easily unload or load up all the shit I travel with - besides the fact that I'm usually bringing stuff for Eve (including Christmas decorations this time) and for my niece and nephew and anyone else I'm visiting, when I'm on a road trip and not a flight I tend to treat my car as a big purse, which means my crap does not lend itself to scooping up and traipsing through a hotel lobby.

Eve usually comes and stays with me at the hotel, and it serves us well, it's un-fancy but clean, but we've had sort of bad karma as far as something weird happening every time. The last time she stayed, the fire alarm went off at one a.m. for no apparent reason - we weren't terribly worried because like I said, we could open the door and be right in the parking lot. But we didn't know what to do. There was no smoke smell, no one seemed to be moving with any urgency, no one was telling us to leave. But this frigging loud-ass alarm kept going off. I finally told Eve to pack her bag and I would drive her back to campus so she could get some sleep. Just as she did, the alarm stopped. They apologized the next day.

This time I picked her up, we got some dinner, went back to the hotel and were watching the season 3 finale of Rupaul's Drag Race UK. Fifteen minutes from the end, the power went off. We sat there for a few minutes, then I called the front desk and they said the power was off in the area. It was raining, but not thundering, so it was weird. We chilled for a while, Eve playing Animal Crossing on her Switch and me reading on my ipad. Then I set up a hotpot on my phone so we could find out who won Drag Race. Then we checked the power outage map and it looked like it could still be hours before it was fixed. We were getting ready for me to drive Eve back to campus so she could shower, and just as we opened the door to leave, the power came back on. So it was all good, except the drag queen Eve wanted to win did not.

The next morning Zarah and Sophie drove to the hotel from Barrie. Zarah texted that they were on their way and say "see you at the Village Inn". We were at the Visitors Inn but I assumed it was a typo. I texted that we were in room 6. A couple hours later she texted that they were checking in and were on the second floor, and would come down to meet us. Then she called us confused because she thought she was at room 6 and it was empty and being cleaned. I had a terrible thought and asked what hotel they were at and she said The Village Inn.

But they weren't, she just got the name of the hotel wrong and there was actually a 106 AND an actual 06. So things could have gone horribly wrong but didn't. We drove to campus and met my former professor - also Zarah's former professor, but mine first, I feel it's important to note that -- at the Faculty Club for lunch, and it was absolutely lovely. Sophie is considering an integrated science program at McMaster, but Zarah thinks if she'd had twenty more minutes Jean might have convinced her to also do Arts and Science like Eve. 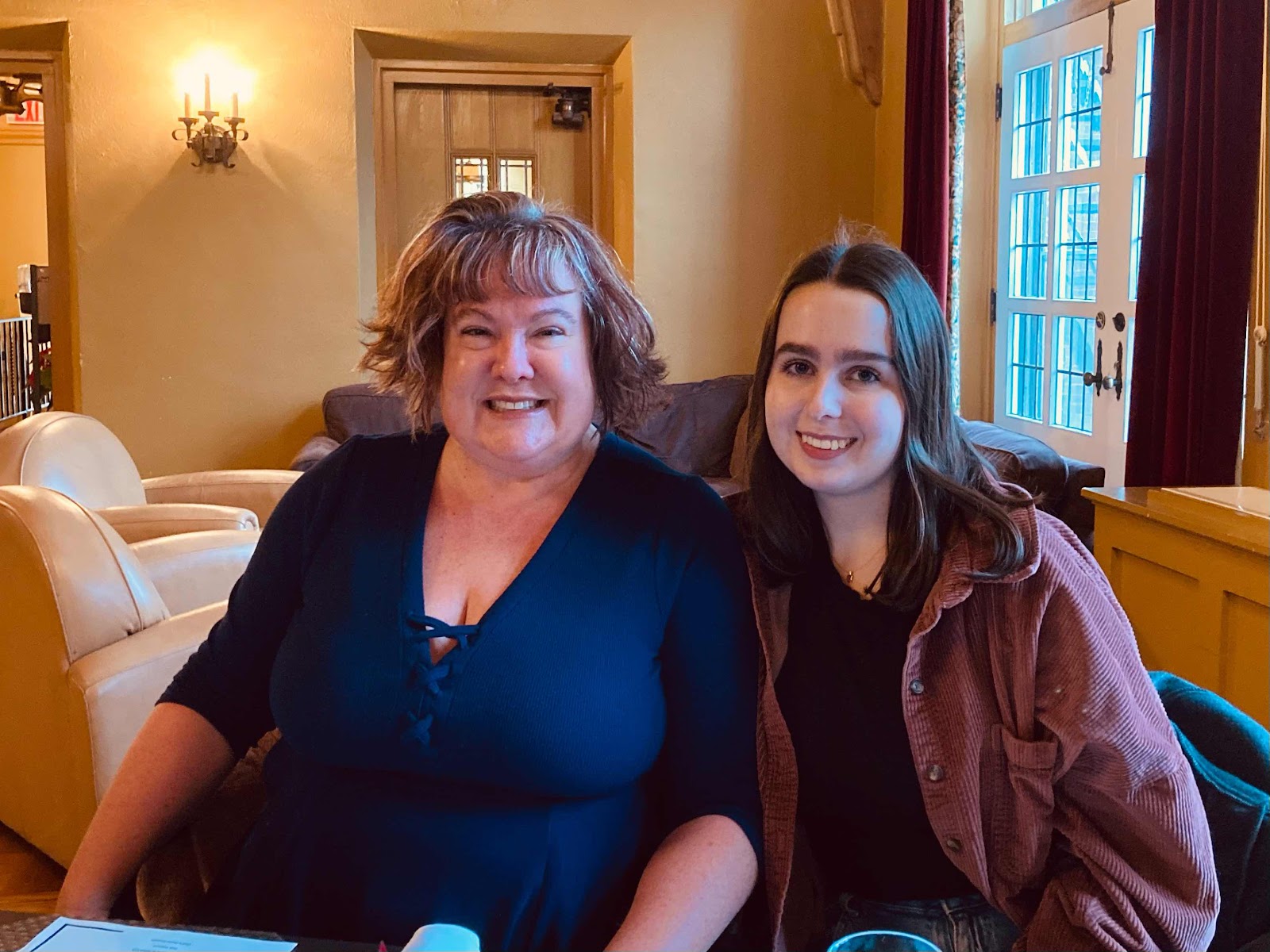 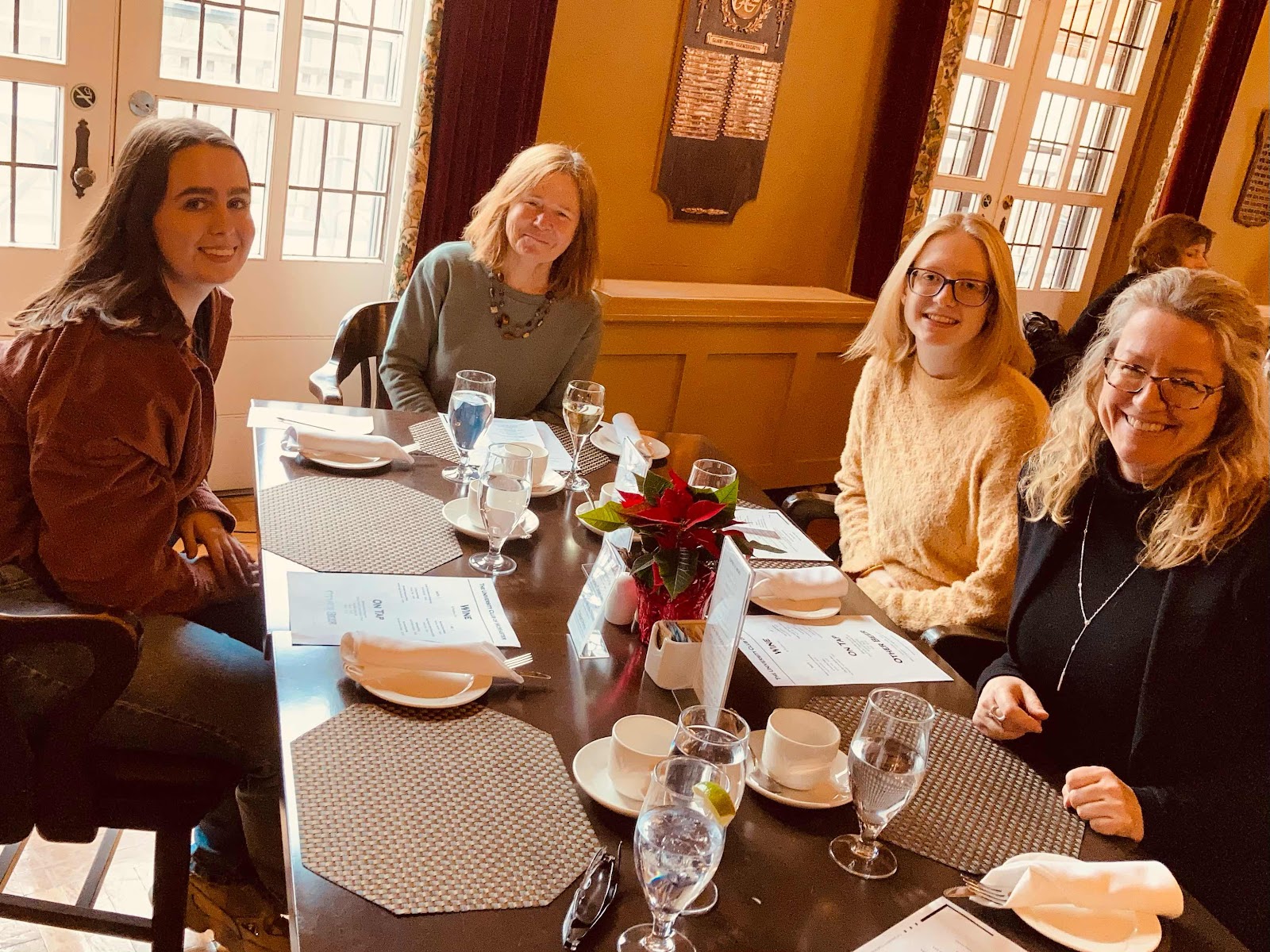 Sophie couldn't get into an actual tour of campus because they're all booked now that they're running again, but we walked around and Eve snuck her up to her room because she could pass as a student (Zarah and I not so much).

If I stop now, I can turn this post into two posts and catch up. Therefore I am stopping now.

Nicole MacPherson said…
So glad you had fun, your hotel sounds like it's weirdly haunted JUST FOR YOU. "How far can we push these women...okay, power back ON."
November 30, 2021 at 4:09 AM

Swistle said…
I am VERY HERE for motel room discussions. There are an assortment of choices when I go to where Rob's college is, and I have definite favorites based on a variety of factors. I love the ones where I can get to my room without going through the lobby, so I can bring in my truly embarrassing giant box of snacks without feeling Judged. On the other hand, the one with a lobby (and, worse: staff who greet you every single time) has a good breakfast available in the morning, with make-your-own waffles, and is located right next door to a Taco Bell. So, win-win.
November 30, 2021 at 4:26 AM

StephLove said…
Glad you got to see Eve. We always stay in an AirBnB when we're in Ithaca. Never the same one twice. One had resident cats. That was cool.
November 30, 2021 at 4:48 AM