NaBloPoMo Day 16: The Quarterback is Toast

While trying to decide what to title a post about breakfast, I remembered that there was a book years ago called Much Depends on Dinner. I assumed it was a cookbook, but it turns out it's more of a historical/anthropological book about how and what people eat. I also came across this delightful quote from it:

“In Athol Fugard’s play, The Island, an African eats an orange whole; at the play’s opening night in London, the audience sat coolly through the nude scenes on stage, but there were gasps of horror at the sight of a man enjoying a whole unpeeled orange.”― Margaret Visser, Much Depends on Dinner: The Extraordinary History and Mythology, Allure and Obsessions, Perils and Taboos of an Ordinary Meal

What prompted this post was that I was toasting an English muffin. As it browned in the toaster I thought about how I always forget about how awesome toast is until I make toast again. I almost titled the post "Toast is The Quarterback", but that seemed even more obscure than the first reference (it's a Die Hard thing, in case you completely justifiably didn't get it).

When we lived in residence, I remember sitting in the tv room and hearing someone in the kitchen through the thin door. He was making toast, and bouncing around the kitchen singing "toast toast toast toast toast" and it was hugely enjoyable (I don't think he was high, I think he was just really excited about the toast). Once a few of us ended up with a loaf of bread and a couple of pounds of bacon, but we didn't have any lettuce or tomatoes, so we ran around our floor delivering 'bacon toasts' to everyone.

There was a quote about how vastly superior toast is to plain bread in a book I read recently. I just went through all the quotes I pulled from that book and then realized, duh, I didn't actually copy down that passage, even though I noticed it and remembered it, because it's about toast, and I didn't know I was going to be writing a breakfasty toast-praising blog post at that point. Also, I think untoasted bread is often very nice - they are two separate and equally agreeable things (unless you have celiac disease).

I don't usually have bread products at breakfast, which is why I probably forget about toast a lot. I usually have yogurt and fruit. When I started having yogurt for breakfast, it was always vanilla Liberte. This went on for years until I went to visit Zarah (HI ZARAH) and she only had plain yogurt. I didn't throw a spoiled-brat fit or anything, but plain yogurt has always seemed sour and unpalatable to me. I ate it, though, like she does with maple syrup and toasted almond slices, which was a game-changer. I came home and ate Greek plain yogurt for years, with maple syrup and toasted almonds. Then I went to visit my mother-in-law and her husband, a few months after she had been diagnosed with the cancer that would take her from us. They were out at the hospital, and I checked the fridge for yogurt. They only had yogurt with the fruit at the bottom, which I never eat, but it was blackberry and I ate it and it was wonderful. My mother-in-law has been gone for almost a year and a half, and I still eat the yogurt and think of her every morning, which makes it sweet and also bitter. 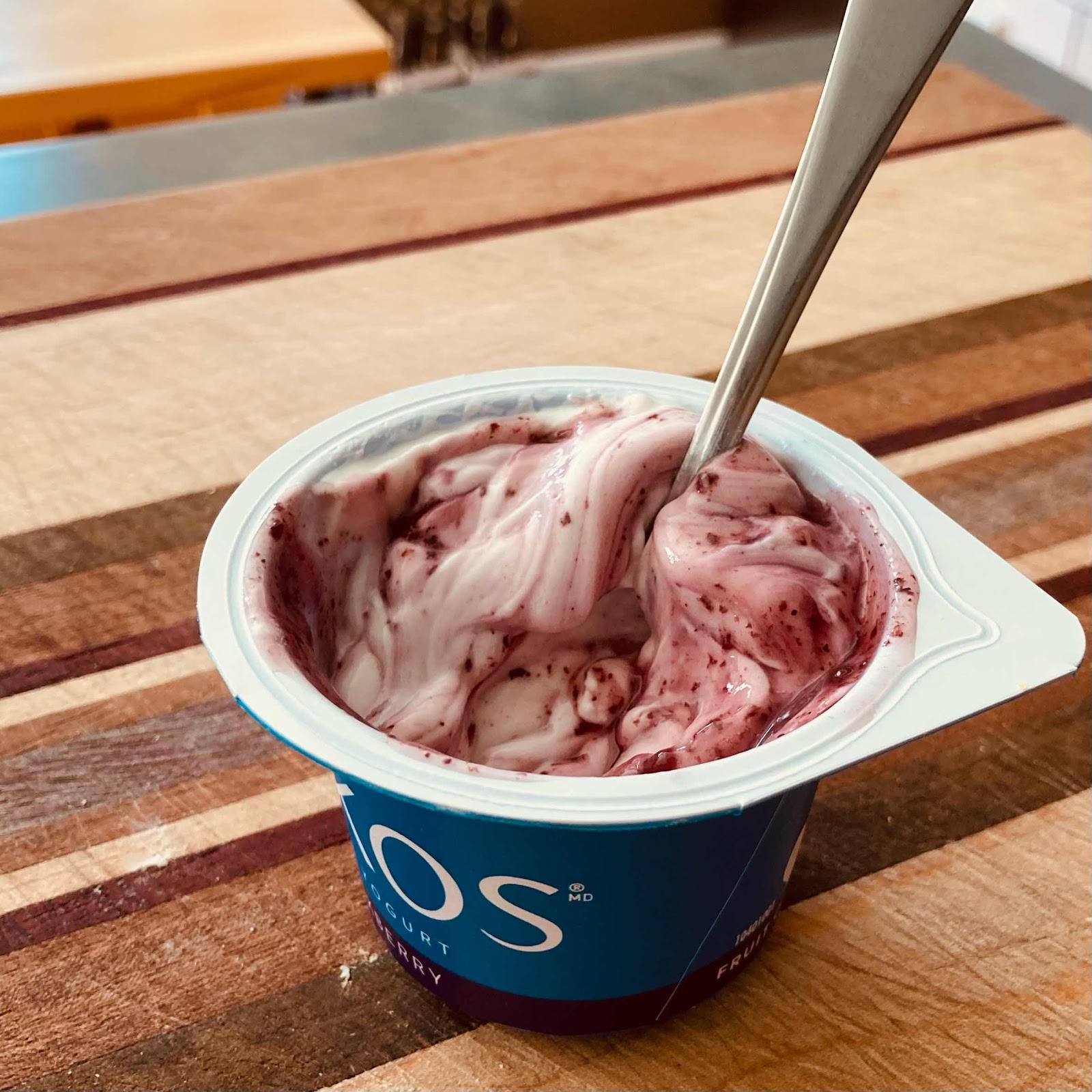 I think toast is the superior version of bread UNLESS it's a baguette or another kind of crusty bread. My go-to breakfast is a smoothie unless I'm running, in which case it's toast with half an inch thick chunky peanut butter. Mmmm.
November 17, 2021 at 3:28 AM

Suzanne said…
Those little lingering memories are so precious and so hard.

Toast is amazing. Almost nothing better than a nice crunchy slice of sourdough slathered in butter and sprinkled with salt.
November 17, 2021 at 11:41 AM

Ernie said…
Toast is awesome . . . except when you have celiac, I appreciate the shout out. ;)

I COULD buy GF bread but I don't bother. There is a restaurant that Coach takes me to for my bday that has the MOST amazing GF warm biscuits that they serve before dinner so I am not 100% deprived.

I have been a huge oatmeal eater forever so toast was never really part of my daily routine. Oh but the occasional English Muffin back in the day? Yum.

Hearing the toast song through the walls was delightful sounding.
November 17, 2021 at 3:48 PM

I've had to change my whole breakfast routine since being diagnosed with diabetes. I'm eating a lot of yogurt and eggs, but I miss cereal and fruit (and toast, but mostly cereal and fruit).
November 18, 2021 at 6:20 AM