I'm sorry for confusing you, Swistle - it was "one day to halfway", which is today, which is halfway, unless I've lost the plot again, which you could all be forgiven for suspecting.

Susan from the Pacific Northwest - I am so happy I get to keep calling her that because honestly it's just really fun to say in my head - said it's okay to keep calling her that because she loves living there. Isn't that nice to hear someone say? Do you think a lot of people feel that way about where they live? It made me consider whether I love living here, and what 'here' actually means.

Ottawa? I don't love everything about Ottawa, but I really like a lot of things. It's bigger than the place I grew up in, which is good, and it's smaller than the place we moved from, which is also good. Living in Toronto was fun for a couple of years, but it felt more manageable to raise kids here. We have nice trails to walk on close by, a good art gallery and arts centre less than half an hour away. We have good hospitals, which resulted in my parents moving close by when the kids were toddlers which was just a dizzying piece of good fortune.

Canada? I love Canada quite a lot. Not in a starry-eyed, rose-coloured glasses kind of way - we have a lot of things that badly need to be addressed. Sometimes I dream about moving to Finland or Sweden (or I did before the whole Covid thing). I try to embody a lot of the features Canada is generally known for - kindness, friendliness, open-mindedness, acceptance of many cultures. I used to love snow more than I do now. I could go on, but it's probably a subject that needs deeper thinking than a post halfway through NaBloPoMo is going to get. The biggest drawback is probably that Canada's really big, and stupid geography gets in the way of seeing my friends and other family enough.

Ontario? Honestly, I feel a little wishy-washy about living in Ontario. Whenever I visit my BFF in Halifax I have to work hard to force myself to come back home - if I had a legit chance to live near the ocean I would take it in a heartbeat. I like Ontario because it's familiar, but I've visited every other province except P.E.I and Newfoundland and found admirable features in all of them.

My house? It's a good house. It takes all the crap I throw at it with a fair amount of grace. It was a good place for the two of us to grow into the three of us and the four of us and a good place for the four of us to hunker down for the lockdown from March to August 2020. There's enough room for everyone to retreat to their own corners and the big family room for everyone to come together for Die Hard and Yahtzee and trash talk. The kitchen could be a little bigger. It doesn't have quite enough room for bookshelves, but I'm not sure any house would. Oh! Here's the after picture of the bookshelf with the CDs gone. 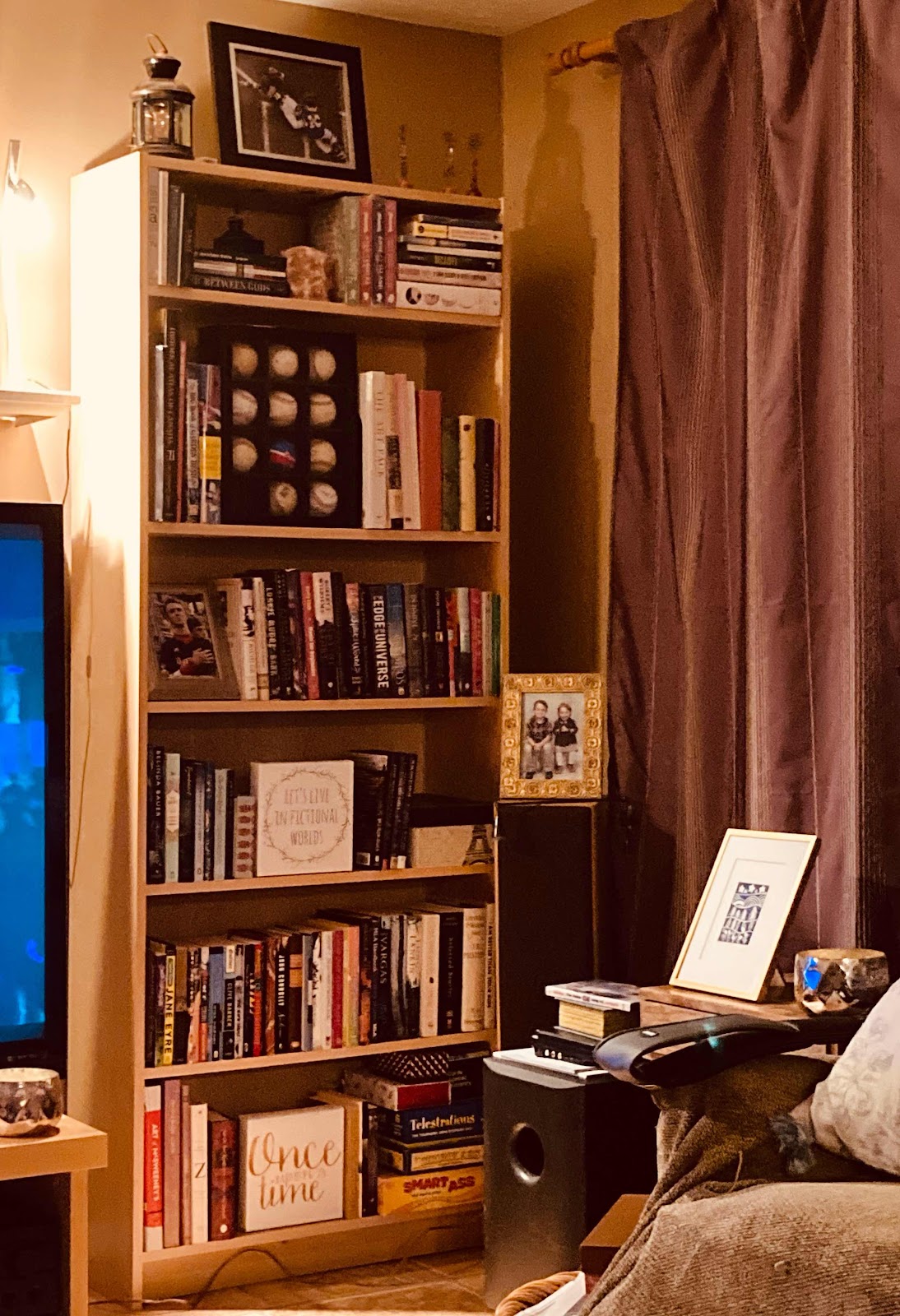 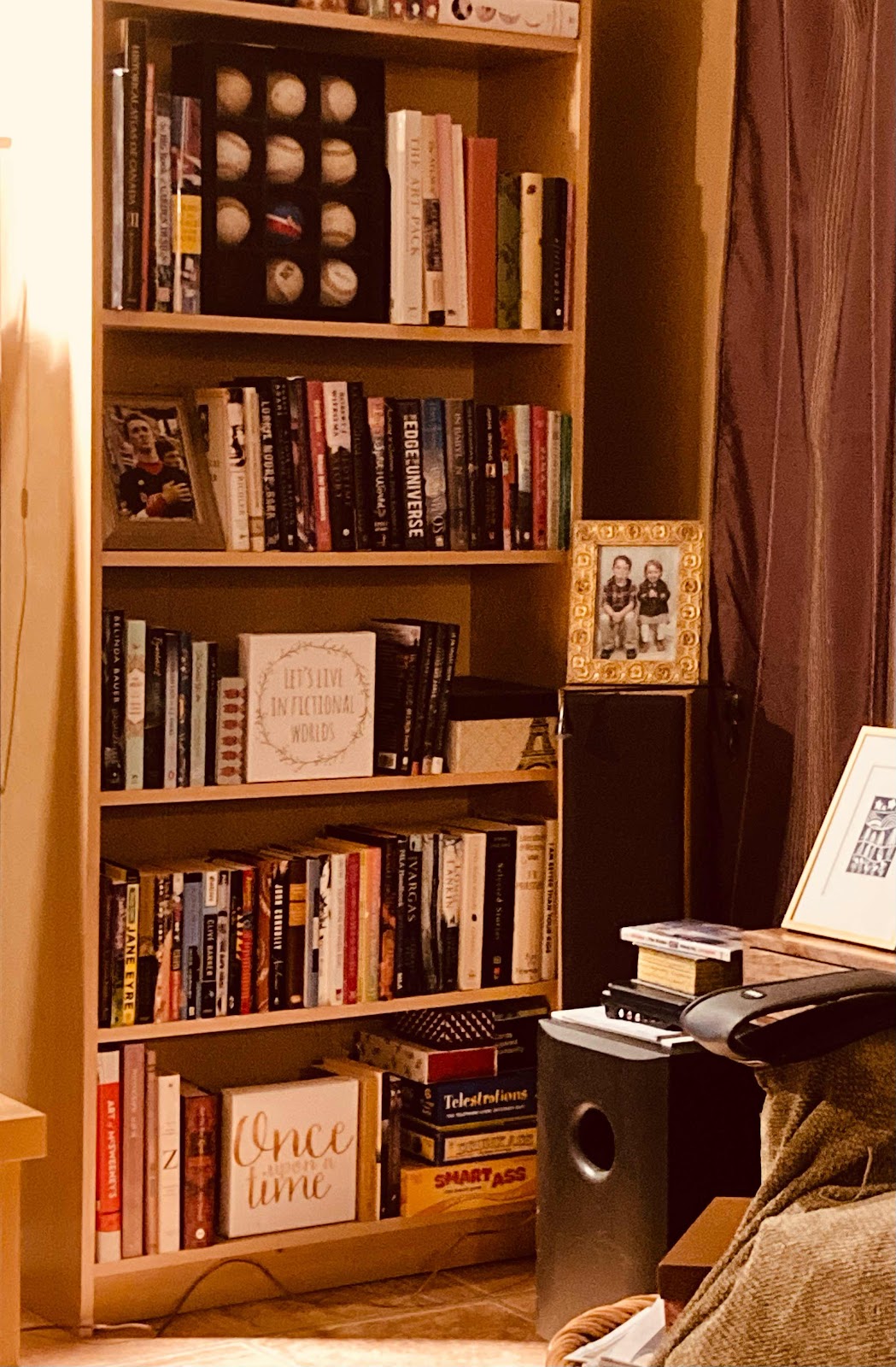 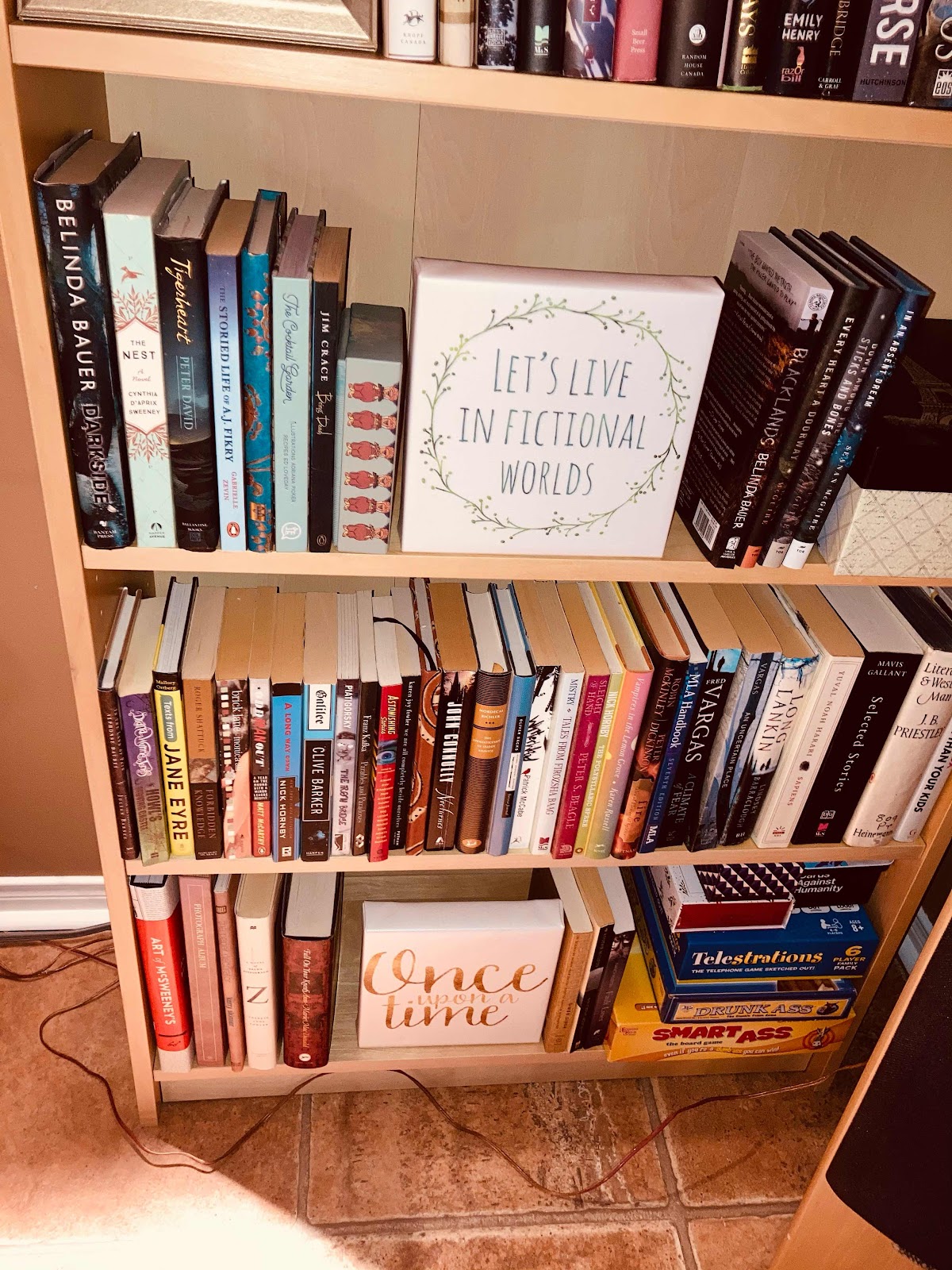 I like it. I keep gazing lovingly at it in the way I always do when I've newly arranged something. Then it eventually fades into the background, which is as good an argument as any for moving stuff around now and then.

We also have really, really good neighbours (I have literally borrowed a cup of sugar from Yvonne - also tomato sauce and a shit-ton of margaritas), and can both drive to work in under ten minutes (I commuted from Hamilton to Burlington for a couple of years before we moved to Toronto and I hate anything that can remotely be called a 'commute' and never want to do it again). We can walk to all our best friends' places (and sometimes stumble drunkenly home), which is kind of a coincidence because we were all friends before we all lived in these houses. And it put us in the right baseball region for Angus to be on the team that went to the Little League World Series - when I think that we could have ended up playing for Kanata... *visceral shudder* (kidding. Kind of). It all adds up to a pretty good quality of life.

This was fun. Susan from the Pacific Northwest, you are a stellar addition to my blog world on so many levels.

Swistle said…
Oh, ONE DAY to halfway! I see it now! Mediocre reading comprehension skills once again rush in where angels fear to tread!

Nicole said…
Oh, I am SO INSPIRED by this post. Is it okay if I borrow the idea? I love it so much and I loved reading about the things you love about where you live (Canada is too big, truth). (Miss you). Also inspired by your bookshelves. TODAY! TODAY IS THE DAY I AM GOING TO START MY PURGE. Maybe. I hope!
November 16, 2021 at 4:27 AM

StephLove said…
On the whole it sounds like a good balance of pro and con for where you live. I think I feel about the same for where I live. Plus, since my purging skills are almost non-existent, I can never leave this house anyway.
November 16, 2021 at 7:45 AM

Ernie said…
Congrats on the completed/reorganized book shelf. Looks great. I was on a purge kick when we were in lockdown, and then? No idea, but there is crap everywhere in our house. Having a college grad move back in is not helping.

I've basically always lived here - so your moving around and comparing and contrasting was fun. Sometimes I feel less like a grown up because we've never just gone out there and started somewhere new.

I've said it before and I'll probably say it again, very envious of your neighbor situation. Our lovely neighbors, who were empty nesters for a few years now, just downsized and moved to the city. We didn't really socialize with them much, but they were very nice and felt more like family. We've known them forever. Anyway, a young family moved into their house from Florida so I plan to bake them cookies in hopes that they'll be the kind of people we want to hang with - even though we're older than dirt.
November 16, 2021 at 7:47 PM