It was World Trivia Night - the second one we did virtually. I was initially bummed that I wasn't going to get to see my team and have our traditional table full of junk food and leftover Halloween candy, but today I finally felt cold for the first time since last spring and almost fell asleep reading before dinner, so I was actually kind of happy I didn't have to leave the house. The virtual ones are ten rounds of five questions each instead of ten questions which it always was before. The first couple of rounds were almost embarrassingly easy and we were like "c'mon, give us a bit of a challenge", and then bitterly regretted our hubris. We still did quite well - came in third, not even tied with like ten other teams, which is usually the case.

The most entertaining aspect is that there's both a general chat and a table chat with just members of your own group, but whenever it changes from you zooming with your group to the presenter taking over your screen it defaults to the general chat. Inevitably some poor schmo ends up posting answers in the general chat. Someone named Jon did it early on until someone else commented "Jon ur a doofus". Some poor sap named Adrian tripped up multiple times, and when s/he finally stopped and the questions were getting hard, someone posted "could have used Adrian's help on that last round".

I am six days into a major re-org and purge mission. Ten minutes after Matt left I emptied the linen closet and started chucking stuff down the stairs. It's killing my back because once I get going I don't want to sit down and lose momentum, and I know I have a short window before the area of my brain responsible for this frenetic need to declutter goes dark again. It's like my processing center just works completely differently for most of the year. I swear I went through the linen closet two months ago and there was literally nothing that didn't seem essential. This time? There are TOP SHEETS to my kids' linen sets. My kids don't USE top sheets. WHY AM I KEEPING THE TOP SHEETS? What is someone else going to do with only my top sheets? NOT MY PROBLEM, BUCKO.

In the family room we have one of those IKEA coffee tables that has six cubbies under the top surface. This seemed cute as fuck in the store, but it's really only cute if you only put one thing in each little cubby - otherwise it's just more crap that everyone can see. I have less tolerance for clutter than I did when I was younger, and I want the visible surfaces in my home to be less strewn with crap. However, I am still charmed by tiny beautiful things. Little robot charms. Tiny pictures of snowflakes drawn by three-year-old Eve. Bird stickers. I've decided that the answer is to get rid of as much as I can bear to and then aggressively containerize the rest. 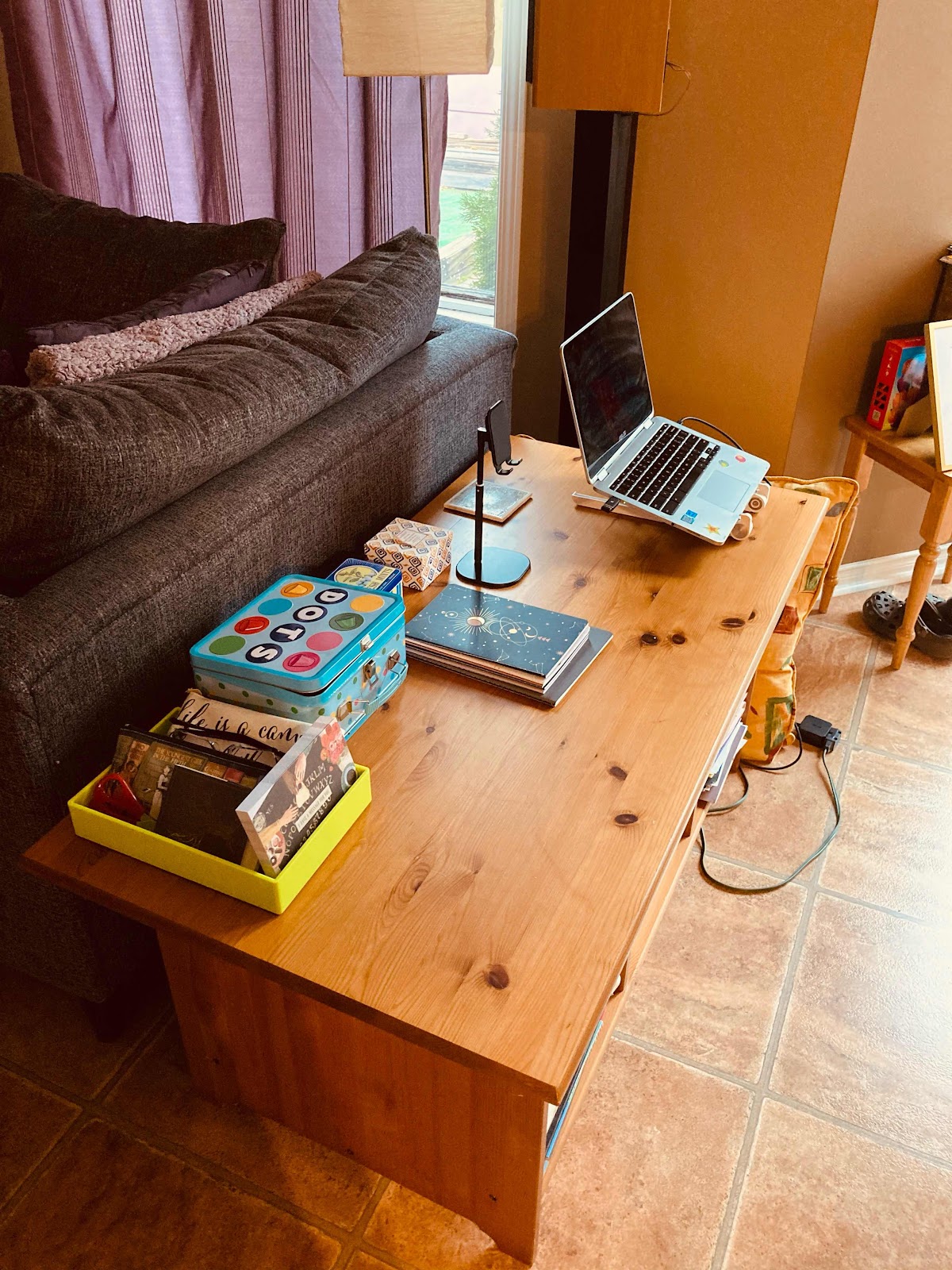 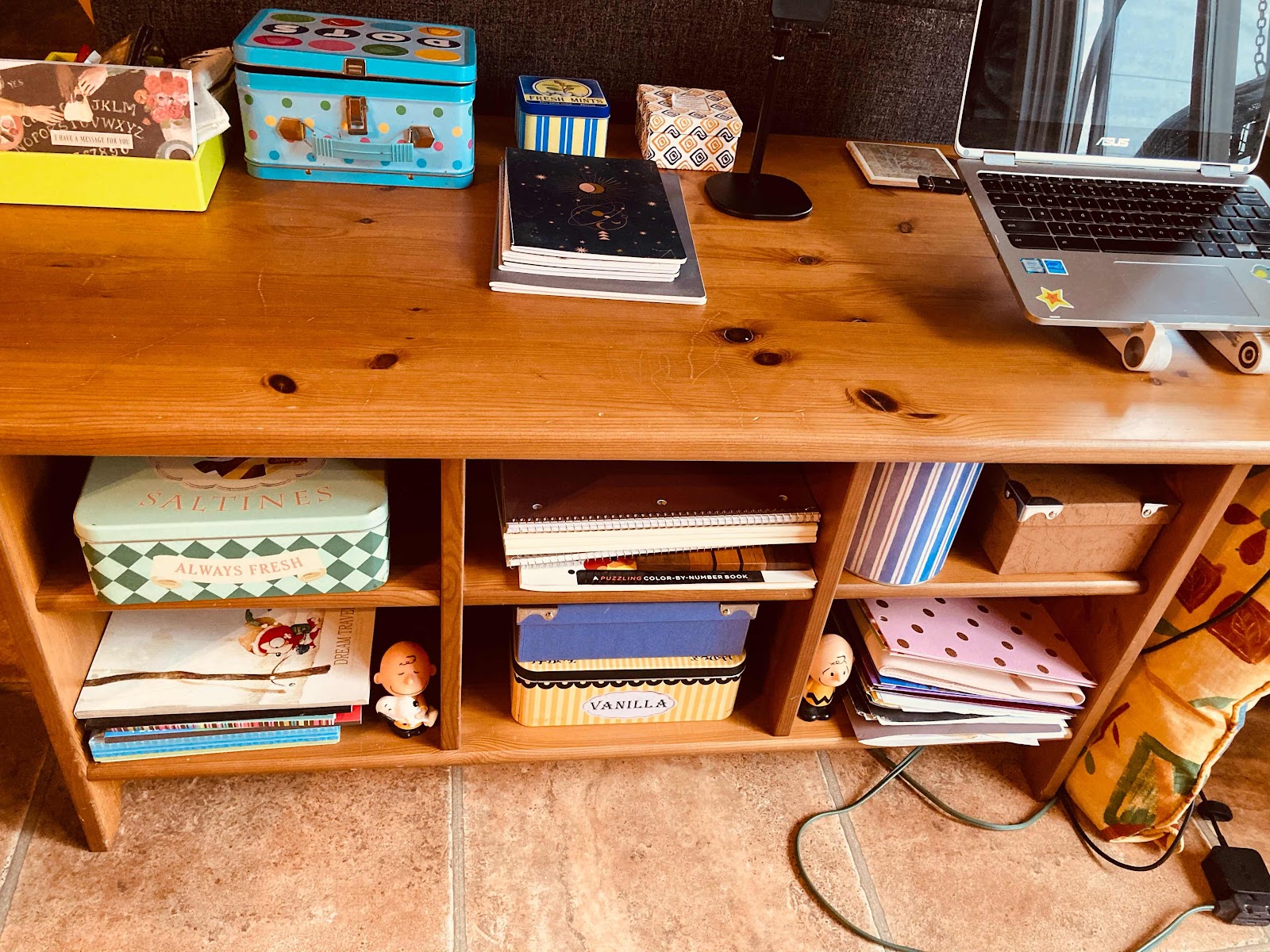 As usual, I forgot to take a 'before' photo, in very Un-Swistle-like fashion (HI SWISTLE), but trust me, this is a vast improvement. In one of the cubbies, I found this: 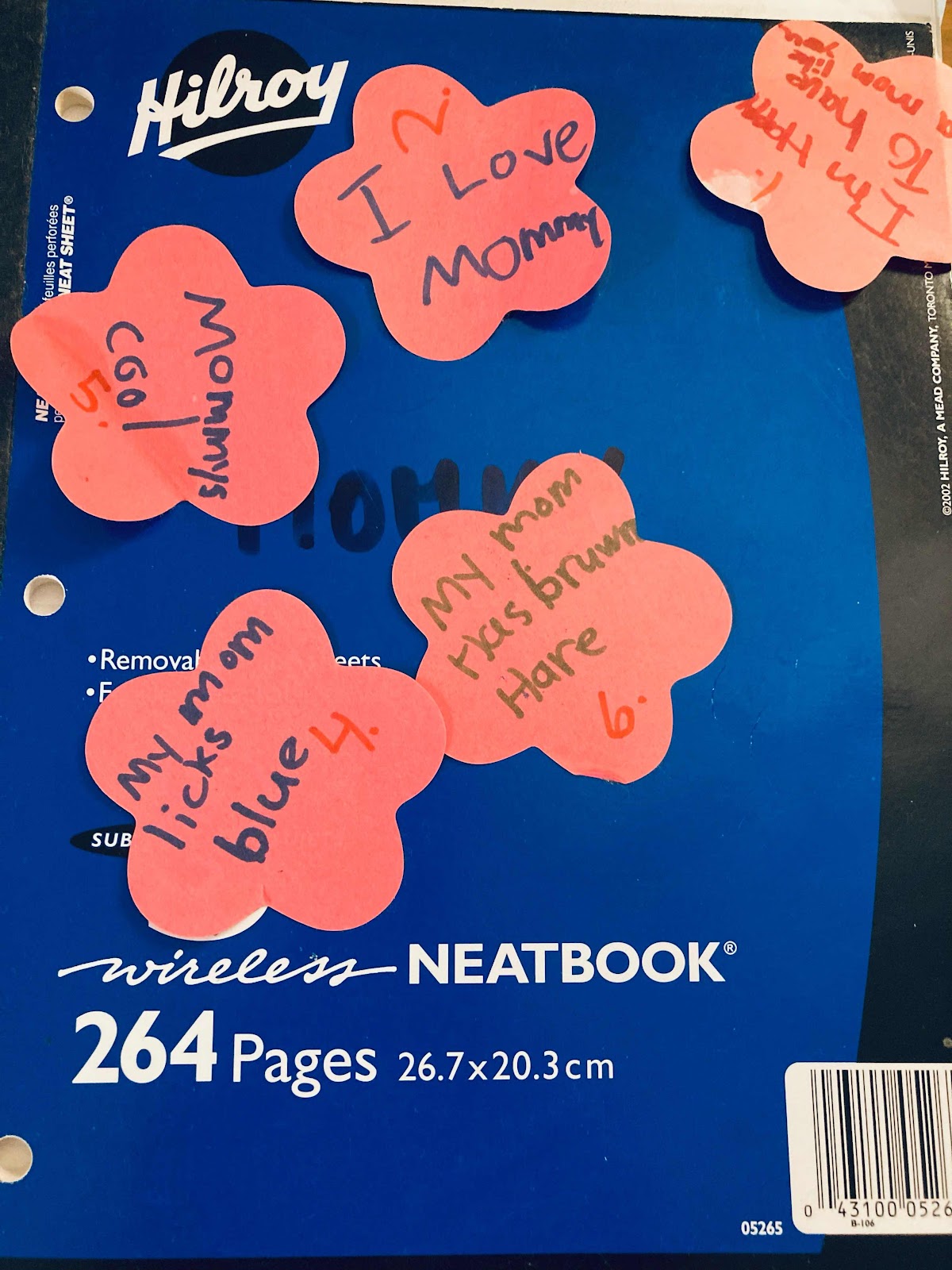 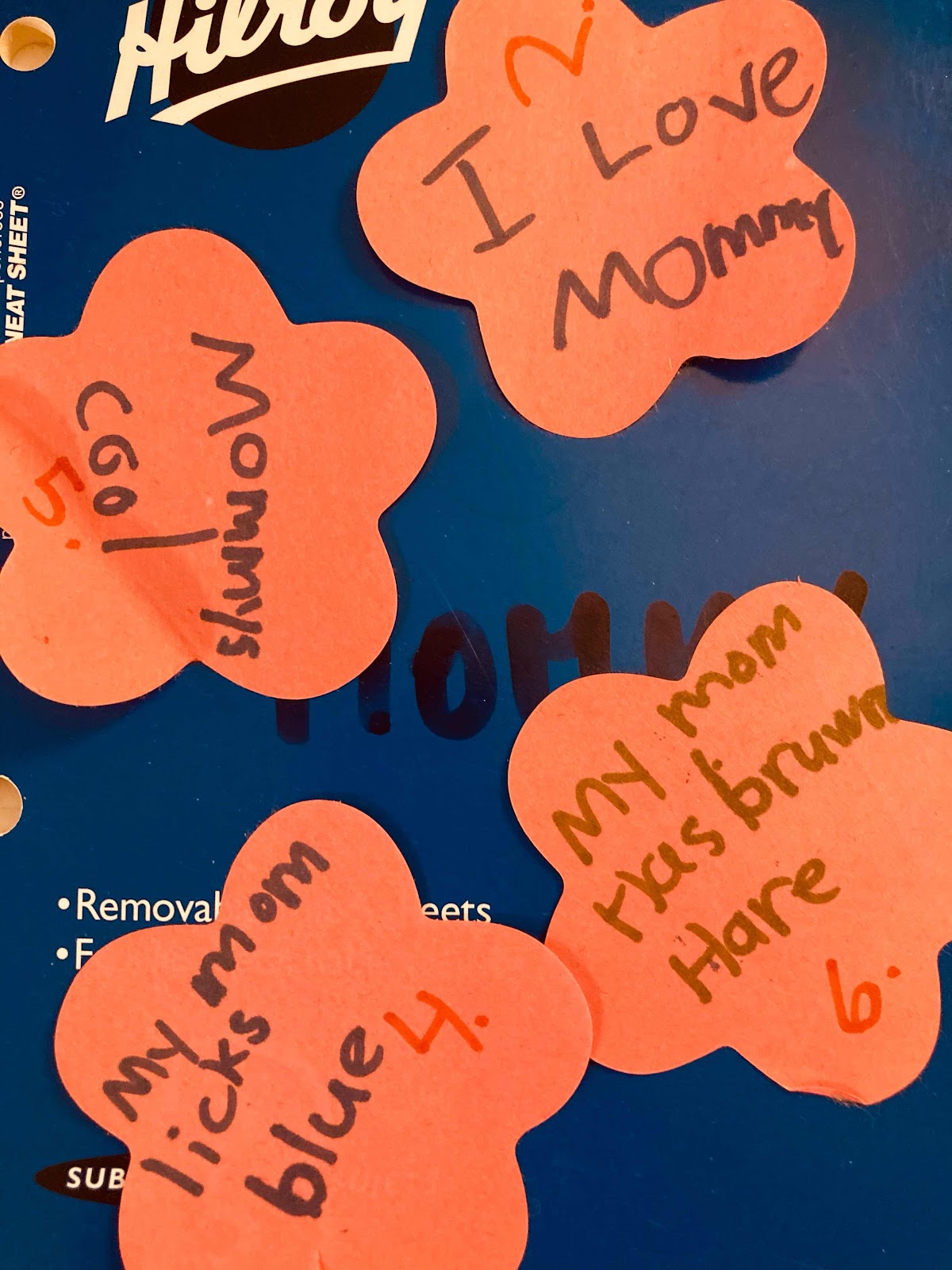 It's my first workbook from when I started my library tech diploma in 200...6? With the encouraging stickers that the kids made for me that read "Mommys cool!", "I love Mommy!", "my mom has bruwn hare" and what should be "my mom likes blue", just in case you thought they were documenting my experiences licking a psychedelic toad or something. Okay wait, a psychedelic toad is just regular boring toad-coloured? We had a stuffed toad that was blue and green and I thought it was the play version of a psychedelic toad. Why would anyone lick a toad that just looks like a regular toad? I mean why would anyone lick a toad anyway, but I thought for sure it would be because it was funky coloured. Anyway, I recycled the book but kept the stickers. They're in a box.

Then I went through the bookshelves out in the living room. Sometimes when I'm going through old stuff I feel embarrassed and condemnatory of younger me for accumulating so much useless crap. Sometimes it's more like a fun archaeological dig, trying to puzzle out the culture and psychology of an earlier civilization. I found a couple of elaborate coffee-table type books that I bought when I worked at the bookstore in Toronto, because when they were being returned we could buy them at forty percent off, and a lot of them I've never really taken the time to go through carefully. At least I'll have something to do when the couch-sitting area of my brain takes over again.

At first I was picturing that the coffee table was, like, a shadowbox, with a glass top and then the little cubbies could have things in them that would be visible on the top. I quickly realized that was a very odd mental leap from what you described---but now I want a coffee table like that. It would be perfect for displaying tiny beautiful things.

I cannot count how many times I have failed to take a Before picture and regretted it. I too am a "seize this inexplicable moment of motivation/energy" declutterer.
November 13, 2021 at 5:14 AM

Nicole MacPherson said…
Awww, I lick blue too. I mean, I like blue.

I am motivated by this! I have been meaning to declutter the storage shelves that have all our photo albums on them - they also have boxes of crap and like, at least six cameras that all use film and therefore we never use. I am going to have to take a deeeeeeep breath and put them on the buy nothing page.

My tolerance for clutter is also very low BUT we are coming into the Christmas season and soon every flat surface will be covered with Christmas stuff.
November 13, 2021 at 6:49 AM

Ally Bean said…
You've confirmed what I suspected about the IKEA coffee table with the cubbies. It'd be a mess if we had it. I rarely think to take before pictures, too. I'm too much into starting the project to slow myself down with a camera.
November 13, 2021 at 6:52 AM

Ernie said…
I often find myself mid-cleaning up a room/closet project and losing interest. That's the worst. I've lost track of all the places I've decided to file away all the kids 'cute' stuff. I totally knew what 'Mom licks blue' meant . . . I guess I speak small child.

I do think it's fun to find the coffee table books. I'd have probably plopped down to look through it and abandoned the project, especially with a spouse out of town. I'd lose all track of time. Good luck. You can do it.
November 13, 2021 at 5:54 PM

Ernie said…
Oh, and I forgot to say that I was very amused by the 'Coulda used Adrian's help there' and teasing Jon. So funny. I'd show up for the laughs and worthless at the trivia, just saying.
November 13, 2021 at 5:58 PM