Let Me Entertain You With My Awkwardness

My Facebook account is restricted for 24 hours because I commented "I wanted to murder her father" on someone's post in my Book Bingo group, about an abusive father who also happened to be A FICTIONAL CHARACTER.

Right after I got this notification, I tried to log into Cloud Library (the express ebook platform for the library) and it was glitchy, so I deleted the app and reinstalled it. Then I tried to log in with my library card number and pin number and it didn't work. I did it roughly ten more times, checking the number carefully, and it still didn't work. Was this a big huge deal? Not really. I could read books on my Kindle app. I could read books on Libby (the NON-express ebooks library app). I could read books from, like, the shelf made of actual paper. But NOTHING ON MY IPAD WAS FREAKING WORKING and it was bugging me.

I dropped her off (a good eight minutes early, thank-you). I did that weird thing where I tried to knock off a few errands, but it wasn't my usual neighbourhood and I didn't know exactly how long I had and I was nervous about missing the call from the office when she was done, so I was a bit on edge. I went to the drugstore, picked up a couple of grocery things, then went back and parked near the dental office. It was around the time they said she'd be done, but they were a few minutes over. I was low on gas, and I had seen a gas station just around the corner, so I started to drive back towards it. Then the phone rang and I answered and they said my mom was ready. I was right at the gas station. Could I have taken five minutes to fill up? Absolutely. Did I? No I did not. I pulled a U-turn and went back to the office, thinking I had plenty of gas to get home and I would just fill up there.

I fetched my now-effusively grateful (also mildly stoned) mother and started for home. The low gas light came on just as we got back on the highway, with no gas stations in sight.

I have no idea how far I can go with the low fuel light on. I have no idea why I didn't just say "I need gas" and pull off. The goddamned CAR said "This vehicle is low on fuel, do you want to search for nearby fueling options?" and I said NO.

Anyway, I talked to my mom normally while keeping one anxious eye on the gas gauge and screaming internally WHY ARE YOU LIKE THIS to myself, until we made it almost home and I saw a gas station and pulled over and felt massively relieved. And dumb.

I had talked to Collette about going to the House of Cheese and the One Plant store next door after my mom's appointment was done. My mom's house is really close to Collette's, so I texted her that I was ready and drove over to her house. We had also talked about going for a walk this week and when I got to her driveway she had texted back "want to walk over and kill two birds with one stone?" 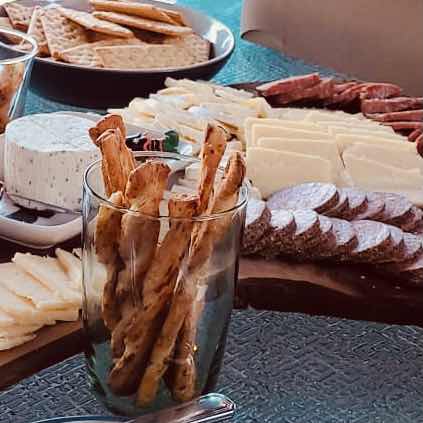 Where we were going was far. Like, really far. Further than I've ever walked on a normal walk. I know Collette's been walking a lot lately, so maybe she thought it was a normal walk? I waffled briefly, but I need more exercise and Collette is a really good friend and a very strong personality and I might have a small problem saying no to her. So I said "okay". She said she'd put some sunscreen on and be right out.

I googled how far it was. It was eight kilometres. EIGHT KILOMETRES. ONE WAY. CARRYING CHEESE. 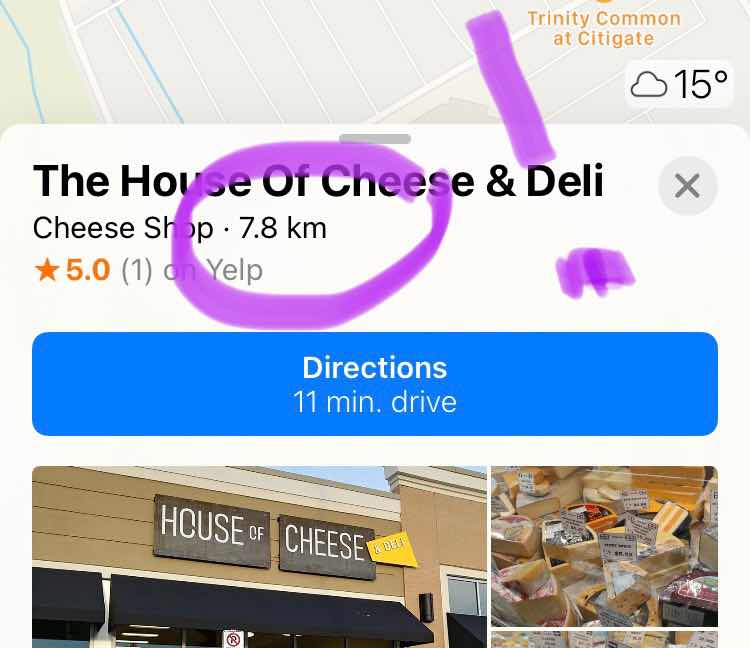 I am a grown-ass woman, and I steeled myself to say "I do not feel like walking sixteen kilometres today, Collette."

She came out of the house and got in the car. I said "Um, so..." and she said "yeah, we're not walking, Rachel just reminded me where it actually is, I thought it was by Walmart" (more like one kilometre away).

Collette is a really good friend with a really bad memory.

We bought a triple-cream brie, a cheddar with claret and a smoked gouda. We went next door and bought, as my niece always says, "some weeds" (which is pretty much as intelligent as I sound while trying to ask for anything there). Then we couldn't find the exit, but that was okay, because we had a ton of cheese.

I have gotten so much better at being less weird and hesitant about speaking up for myself. By the time I'm, say, a hundred and forty-three, I'll be perfect.

Kara said…
I am DELIGHTED that there is an actual store called House of Cheese. I have made my husband go on a side trip to a store called Takes the Cake in Pasadena, CA, solely because of the name of the store. I would likewise do the same for House of Cheese.
July 12, 2021 at 12:55 PM

I have a couple of strong-willed friends, too, so I felt like you did EXTREMELY WELL to even START with the "Um, so." VERY NICELY DONE. (But I'm glad she was like "Yeah, absolutely not," rather than...well, anything I can imagine one of my strong-willed friends replying, if they DID want to walk 16K.)

Nicole MacPherson said…
I walk a lot and I would not walk 16 km with a bag full of cheese.

Your FB thing reminds me of what happened to R - he commented on a video in which a guy was in a laundry basket on a treadmill, seeing how fast the treadmill could go before the laundry basket - with the guy in it - flew off. He commented "guys are dumb" which is a very true statement no matter the context, and it got deleted and flagged for being "hate language."
July 13, 2021 at 3:49 AM

StephLove said…
I am glad you got your delicious cheese without having to walk 16 km for it. I am having trouble walking a couple miles in the humidity we have this week.
July 13, 2021 at 6:10 AM

Ernie said…
I love it when you let us inside your mind. Such a fun place to visit. The almost running out of gas thing had me in stitches, followed closely by your hesitation telling someone you didn't want to walk 16 km. Coach and I were looking at places to rent for a few days for a last minute family vacation (which is most likely not going to happen) last night just before bed, so I had my laptop in bed. Not a usual thing. He went to sleep and I was reading this post biting my lip so I wouldn't bust a gut laughing and wake him up. Glad you got your cheese without dealing with blisters that you would've certainly ended up with.
July 13, 2021 at 11:43 AM

Collette... Strong-will, weak-liver said…
I love reading your posts. They always make me smile and usually make me laugh out loud. The Facebook ban is crazy. I guess their algorithm isn't quite perfect yet. Once it is, it will take over the world.
How were the cheeses? Did the girls like them?
We still need to get that walk in. :)

Busy Bee Suz said…
You and your awkwardness always make me giggle.
I've done the gas thing and I always say: What are YOU thinking? STOP and GET gas.
I'm glad all went well with your mom and I love that she had a slight snide remark on your tardiness. {noted, Mom noted!}
I had to google how to convert kilometers to miles and not on your effing life. Not for a charity. Not for cheese.