I'm so glad I decided to post every Monday during the pandemic, while keeping track of how many weeks in we are and telling you all what I'm reading every week. It's really helped keep me on track.

OH WAIT, ha ha, that wasn't me, that was Nicole (HI NICOLE). I, on the other hand, have maintained my usual scattershot approach, which means every now and then I look up and two weeks have gone by, and I still don't know what the hell to blog about. Oh well, being a hot mess is kind of my brand, it's a little late in the game to try to change it up.

Let's see, what's going on with me? Same shit, different day. Since Friday we can get together outside in groups of ten again. So Friday evening we got together in a group of ten, obviously. I kept looking around and giggling and saying "guys? I DON'T LIVE HERE."

My allergies are still pretty bad although slightly improved. My neighbour is having the same issue and we sit outside and drink margaritas and talk about how much we're spending on Hydrasense and how this is really the least fun of all the ways we've heard to shoot money up your nose. Also, I've never seen a frikking dolphin once.

I've been having problems with my right knee, which has been problematic in the past but I had done physio and if I did my stretching exercises religiously it behaved, until it didn't. Nicole often gently suggests yoga and I always mean to do yoga, but somehow I never get around to doing yoga, and poor Nicole beats her head softly against the wall, and I went to physio and the nice lady said that my hip and hamstrings and everything are very tight and pulling my kneecap out of whack, resulting in inflammation, and I should focus on stretching my hip flexors and hamstrings and lower back and glutes and I said "so like....yoga?" and Nicole laughed and laughed (actually she was completely lovely and helped me find a good beginners program AGAIN because she is The Nicest Person in the World even when I make it really difficult).

Eve turned in her last English essay, which was supposed to be 'in her own creative voice', so she titled it "Hamlet is a Weenie", with my full approval.

I had something really weird happen the first time I sat outside with my friend Jody for a drink when we could see people outside our own household. I sat there talking and looking at her face for a couple hours, and then when I went to the washroom I looked in the mirror and was freaked out that I didn't look like her. I think Zoom might have warped my self-image forever.

I'm preparing to apply for a couple of jobs for the fall so naturally getting a head start on freaking out. I haven't done a job interview in three years! I don't know how to run a library! What if they want to interview me before I can get a haircut? Omg, did you guys know Mark Harmon is married to Pam Dawber? Like, Mork and Mindy Pam Dawber? Since 1987? And she guest starred with him in NCIS this year with half-grey hair because she said she couldn't get it dyed because of Covid? Which sounds super sketchy to me, because I thought things in the U.S. were way more opened up than us and come on, tv actors MUST be able to get their hair done. Well actually she called her hair "Covid-19 Platinum", so maybe she just decided to let it go gray. Anyway, her episodes were good and the whole thing was just kind of trippy.

Here is a picture of my friends' dog looking like a big happy muppet, and my friend Tony looking inexplicably angry. 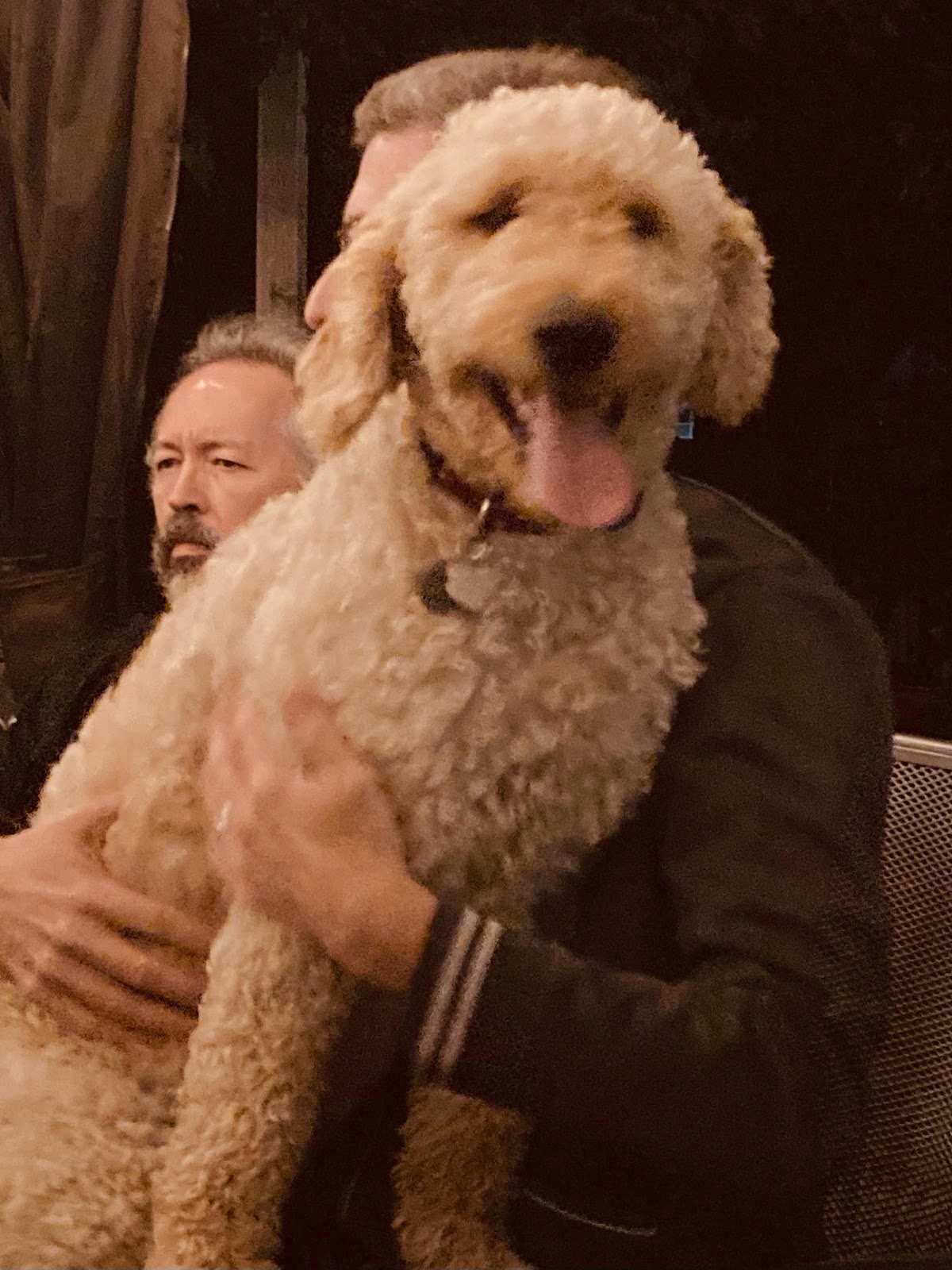 I realize that calling this a blog post is a reach. But I'm supposed to be stretching anyway, ha ha, get it? I'll just be over here trying to blog and bend like Nicole, look like Jody, and embrace life like Scout.

Ernie said…
Not only is this a blog post, it is my favorite kind. It is a very entertaining blog post. I knew right away that you were referring to Nicole. Nothing gets past me. Love the wrap up at the end with the 'stretch' reference. You're a pro. I have no doubt you can run a library, or organize it, or whatever the job description requests. People with a good sense of humor go places. *This is how I know my sense of humor is under par, because I'm running an in home daycare.* I didn't know Mindy was married to Mark Harmon. That's nuts. I don't watch NCIS, but I kind of love that she did the show with her hair in need of a dye job. Rock on, human-like actress. I died when you thought you should look like Jody. Hee hee. I'm married to a physical therapist (what you call a physio). He likes to assign me exercises for when I complain about a body ache. I just think he should massage my ache and pain. So much more effective than dumb exercises. Can I get an amen?
June 16, 2021 at 7:38 PM

I had no idea about Mark Harmon but I love hearing about longstanding marriages in Hollywood. Like Tom Hanks and Rita Wilson! Or Paul Newman and Joanne Woodward!

I think some people are deciding to go with their gray, post-covid.

Busy Bee Suz said…
Well if this isn't a post, then what have I been doing for all these years?
You made me laugh. At first when I was reading the first paragraph I was all: "wait, this sounds like Nicole, but this isn't her blog. What the hell did I put in my tea?"

A new job. Goodness. You know you can DO IT! Don't be so judgmental about yourself, save that for judging others.

That dog is HUGE and I'm sorry your friend is so angry.

I hope your body parts can get stretched and feel better. I have issues off and on with one knee and I find that if I STAY diligent with the Glucosimine (sp?) and Tumeric, things tend to feel better.
June 18, 2021 at 11:27 AM