I guess I'll just say a bunch of random stuff because I keep sitting down trying to write a post about.... something....anything..... and failing.

It's been decided that in the fall Eve is going to McMaster University in Hamilton, Ontario, about four and a half hours away. She was accepted into the Arts and Science Program, which is really cool - limited-enrollment, interdisciplinary, emphasis on social awareness and developing transferable skills. Matt and I both went to McMaster, and we had friends in the program, and Matt's brother later went into it. Matt encouraged Eve to apply while I was sort of hoping she would go to McGill in Montreal, two hours away in a cool city with her friend Davis. Davis's mom and I (HI JODY) have become really good friends and I had visions of excellent Montreal adventures with and without our daughters. Plus if she was homesick or anything bad happened I would only be two hours away.

Well, things didn't so much go my way on this. McGill has been taking it's sweet goddamned time accepting my perfect jewel of a daughter (not that I'm bitter) - not just her, to be fair, it's become increasingly clear that they don't really operate on the timeline all the other universities we applied to do. 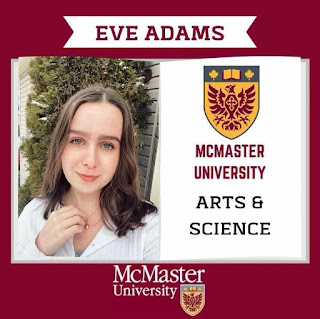 Matt's brother who's a cardiologist is on the faculty at McMaster as - I don't know, some kind of doctor teacher. A couple of weeks after Eve was accepted to the program, his lovely wife also got a job there. I yelled upstairs to Eve "Hey, Laura just got a job at Mac too - isn't that AWESOME?" in a very sarcastic, the-universe-is-markedly-not-bending-to-my-will tone of voice.

It's good. It was a good school when we went, and it seems to have only become better, based on the marks that you now need to be assured a spot in residence (I still would have been a shoo-in, Matt not so much, tee-hee). My sister is only an hour away, Matt's brother and his wife less than that, plus many friends that we don't see enough of. And now that I'm settling down to it, her going to the same university we did is really kind of cool. Jody and I are joking about being Co-dependent Empty-Nester Alcoholics (I think it is a funny joke and yet I am slightly uncomfortable joking about alcoholism so know that I am conflicted posting this. Also I am a laughable lightweight at this point, so it's more Co-dependent Empty-Nester drink-one-glass-of-wine and cry a little bit in an extremely stereotypical how-are-all-my-chicks-flown manner, but then we can't call it CENA, so, poetic license).

Speaking of chicks and nests, remember the Grackle-Crow Rumble that Matt and I witnessed on our walk? Well, we realized that there was a chickadee nest in the cedar bush in our back yard. And then Matt saw a baby chickadee out front looking confused, and then there was a mother chickadee going frigging bananas in our back yard all day. We were all walking around checking the bushes for the loudly peeping baby and Lucy was running around not knowing what the hell was going on but wanting to be involved (we were hoping "being involved" wouldn't include "eating the baby chickadee"). There's no resolution to this, but at least there was no visible dead baby bird this time, and the chickadees hopping around the back yard from the fence to the tip of the push broom to the garden gargoyle is entertaining and makes me feel vaguely Snow-Whitish. 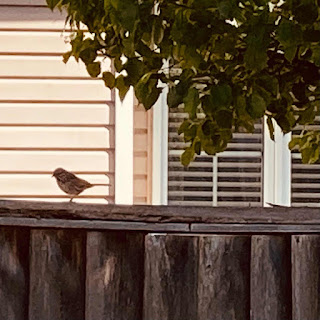 Well that was a smoother segue than I was hoping for. I don't have anything else nest-related, I don't think. Except I'm annoyed again at myself for being a giant cliché, sad about my kids leaving home, even though the only thing more annoying than a cliché is someone who tries so hard not to be a cliché that they end up being one of those obnoxious parents whose kids only listen to Bob Dylan and never get to eat a hot dog. I mean, have you seen the Backyardigans? That is some good shit that you're going to miss if you're trying not to do parenthood traditionally.

I mean, it's good that I miss them when they're gone, right? That means they're not assholes (not all the time, anyway, which is all I ask of anyone, including myself). We're supposed to raise them to want to leave. Growth. Potential. Opportunity. It's the natural fucking order.

StephLove said…
It's hard, this growing up and going away thing. Good, but hard.

I told Beth it was alarming how much I missed Noah when he was gone for 2 weeks because I'm completely used to having him around all the time. It's almost like he never went to college and I'm afraid it may be just as hard when he leaves in August as it was the first time.
May 30, 2021 at 8:34 AM

Nicole MacPherson said…
Congrats to Eve! It's really neat she's going to your and M's alma mater! That is really cool. Also, she's still in Ontario and 4 1/2 hours is a drive, it's not too bad - if you had to go out for a weekend, it would be very doable. Sure, Hamilton's not Montreal! I don't even really know what's in Hamilton. The Ticats?

Ernie said…
Congrats to Eve, it sounds like an impressive program. That other school's loss, clearly. So weird that they haven't gotten acceptances out. I know you are in Canada so maybe it's different, but don't kids get accepted by like April or May 1 at the latest? I, too, think it's great that she's going to your alma mater. I don't think I would get into the college that I went to, if I tried in current times. I mention my college as an option to my girls (it's an all girls college - across the street from Notre Dame) and Mini sort of rolls her eyes. Maybe Curly? Really, I don't care where they go. I want them to be excited about their choice. My school is like an hour 45 minutes away, bonus. Tank will be 6 hours away (at Coach's alma mater) in the fall. Lad was in New York, so that was usually a flight. Ed is 3 hrs 45 min away. It's hard when they go away. Such an adjustment. Our house will be so different without Tank. Sigh. But, yes . . . this was the goal. And, that poor mother bird.
May 31, 2021 at 8:34 AM

Shan said…
We were lucky when Abby changed her mind and decided to go local for post secondary, it meant we could delay the inevitable for a little bit. Wild to think she only has another year then she'll be teaching little humans, she's still my little human! Congratulations to Eve! Perhaps this means the chance to see each other's faces in person. I am a light weight expert at drinks on decks! Much love to you my empty nester friend!
June 3, 2021 at 8:50 AM

Busy Bee Suz said…
Yes, it's the natural fucking order. That could be a Hallmark card.

The bird thing. I wonder if another critter got one of the babies? Ughhh....nature isn't always pretty and it can be downright brutal.
June 4, 2021 at 5:29 AM