Girding My Loins for the Book Posts

Well, it is a new year. Same as the old year so far. I don't make resolutions, except insofar as I make resolutions every day - to try to go to bed and get up at what normal people consider a reasonable hour, to eat more vegetables and get more exercise, to donate money to charitable organizations and fight against structural inequality, to smite my enemies and learn how to shoot fire from my fingertips, and to organize my house so next year we can find the Christmas tablecloth in time for Christmas dinner.

New Year's was quiet but nice. Matt concocted a recipe for salmon that is amazing and is going into our regular rotation, and I made lobster fettucine. We were stuck on what to do for dessert, then decided on doughnuts because most of us like them more than more traditional desserts and Angus doesn't get Tim Hortons in the States. We played Poetry for Neanderthals again - I was a bit worried that it was too soon and it would be less fun, but it wasn't. We played boys against girls and Matt drew his first card and looked at it and started laughing and couldn't talk and basically ran out his time laughing with Angus gazing at him in consummate disgust. He accused Eve and I of using Female Telepathy because we kept guessing correctly with very few words. Then he tried doing the same thing but staring at Angus didn't work and Angus just got mad.

We finished the evening on Zoom with the people that are usually here for New Year's - Dick Clark's New Year's Rockin' Eve was really weird, the camera kept panning to the crowd and it was like four people. The closed caption writer was either a Russian bot or intentionally punking the viewers. During Doja Cat singing Say So I read "let me chest my breast right quick" (it was supposed to be 'check my chest, my breath'). Then they came up with "now that the champagne cork has been pooped" and "happy flu year". Eve, my little teen-aged seventy-year-old, stayed up until midnight under bitter protest ("HOW IS THERE STILL AN HOUR AND A HALF LEFT" "I HAVE BEEN AWAKE FOR MY ENTIRE LIFE").

Other than that, we've been painting the other half of the kitchen, which is chaotic but no one can come over anyway, so why not? I have been sleeping a lot and reading a lot and occasionally I feel guilty and lazy and confused about where all my cleaning and organizing energy from November went (remember Matt told me to pace myself because this time I wouldn't run out of cleaning energy and not clean again for six months and Swistle agreed with me that he was wrong? WE WERE RIGHT, SWISTLE). Then I think well heck, that was only two months ago, I can coast for a few more weeks and end up with an  acceptable-for-me ratio of industriousness to slothfulness. Plus I'm just too tired to be anxious. I bounce between being nauseous, weepy and homicidal from perimenopause-induced lack of sleep to sleeping fourteen hours a day. Today I asked Eve if she was all set for when she had to be up for online school tomorrow and she said "tomorrow's Sunday". I stared at her in open-mouthed shock for half a minute and then went and unpacked my lunch and took my badge off the corner of the table where it was waiting for me to drive to an empty school at eight o'clock tomorrow morning.

I have started getting up and walking outside or on the treadmill most days because then even if I feel crappy and out-of-sorts and unaccomplished for the rest of the day, at least I went for a walk.

So the book posts. I gave some thought to not doing them this year. I'm sure reading people would be just as happy if I just picked the ten best or something, and non-reading people don't care in any case, and it takes a lot of time, and it's January so I'm in a bit of a What's-the-Point-of-Literally-Everything Mood ANYWAY, and it would probably make more sense if I do what Nicole does and just mention a few books every week. But fortunately or unfortunately I am a bit obsessive and somewhat of a completist, and I find making lists relaxing, and I can do this while rewatching Brooklyn Nine-Nine. 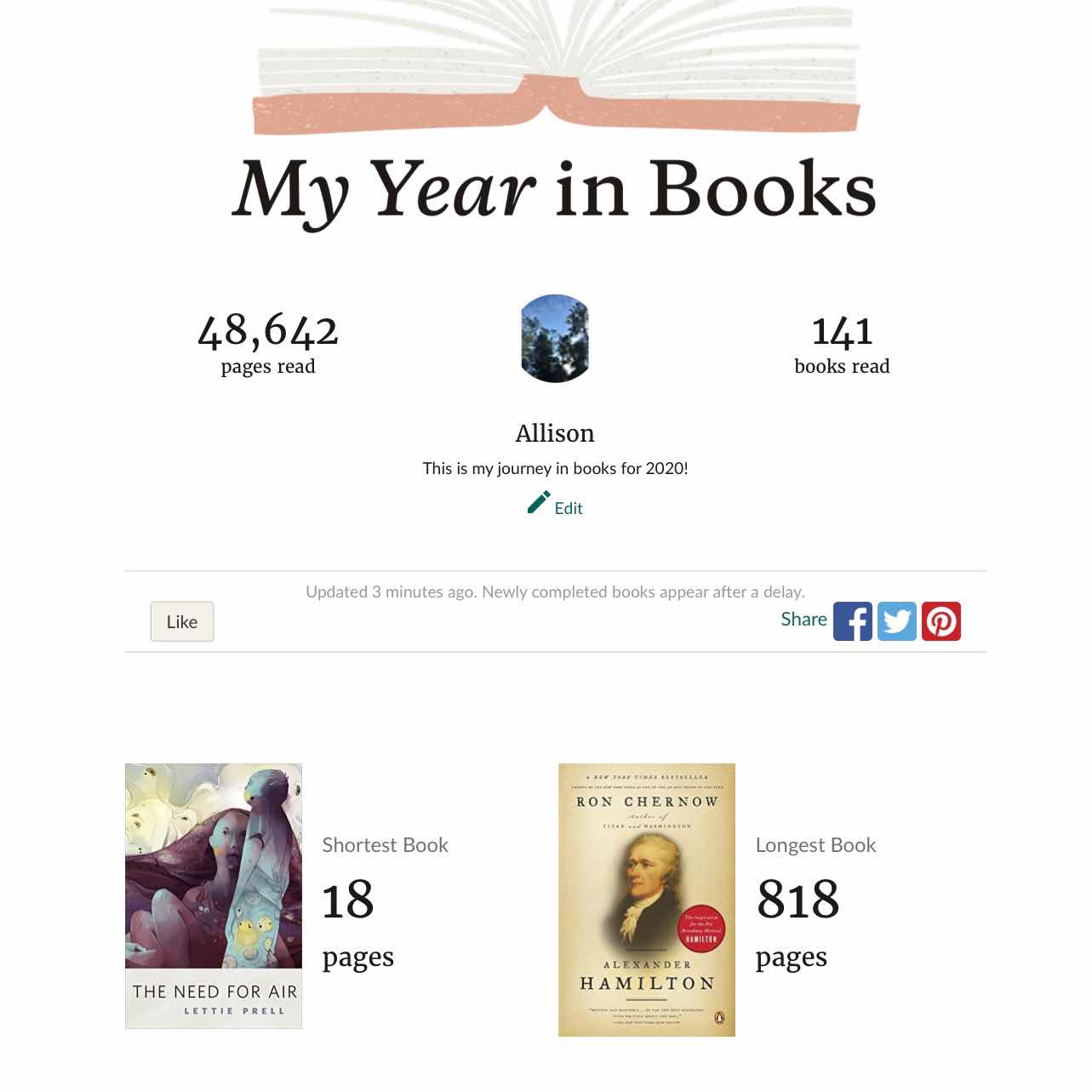 I thought this would be a record. It was not. It's the most of the past few years, but apparently in 2014 I read 181. ONE HUNDRED AND EIGHTY-ONE? What the hell? Angus was fourteen. Eve was eleven. Did I just not parent them that entire year? I was having pretty bad insomnia for a few years there, so maybe I just read instead of sleeping?

I started off this year with an organized plan for reading a good variety of genres and sophistication levels. My Book Bingo Facebook group was useful for focusing on books I meant to read that fit into categories. I was determined to read more female authors. Halfway through the year I kind of forgot about all the planning and just read whatever, but a few months ago (I think) someone mentioned the female authors thing and I tallied what I had read and still had a pretty good women-writer total. We'll see how it ended up. I feel pretty good about the overall quality of what I read - my spooky-books for spooky-season reading in October was really fun.

Should I have a better plan for reading in 2021? Probably. Will I? Meh. Concentrate on women writers and non-white writers. Revisit a classic or two that I missed in university (I'm thinking maybe Vanity Fair this year, and maybe take another run at Trollope - I love saying I'm taking my favourite Trollope to the beach, but I finally tried to actually read Trollope last year and bleah - all I remember is something about patches and butts, the appeal is totally lost on me.)

Swistle said…
WE ARE ALWAYS RIGHT

I love the list of resolutions, which seems as if it would peak at shooting fire from the fingertips, but actually peaks at finding the Christmas tablecloth.
January 3, 2021 at 6:13 AM

I loved this post, having NYE on a Thursday seemed to really confuse our whole house. How was that Hamilton book? 818 pages seems LONG and I want to know if it's worthwhile or not, yes I could wait until the book post comes out but I want to know NOW.

My favourite book(s) this year were You Can't Stay Here, Arabic for Beginners, and Laura Lamont's Life In Pictures.
January 3, 2021 at 6:47 AM

Magpie said…
Hmm. Favorite? That's like trying to pick a favorite child, isn't it? (Happily I only have one of those, so no need to pick.)

Honestly, I loved the book about funguses (Entangled Life: How Fungi Make Our Worlds, Change Our Minds & Shape Our Futures). I quite enjoyed The Emperor of Ocean Park. I feel accomplished for having read Beowulf AND The Odyssey. I quite liked both of the Sylvia Townsend Warner books that I read - totally different and yet totally compelling: The Corner That Held Them, and Lolly Willowes.

I should go through my list, I read a spectacular amount of crap last year -- light and fluffy (except I read a lot of books on race issues this year.) The Marrow Thieves was my favourite YA, loved the Night Circus, and enjoyed the silly romp that was Red, White and Royal BLue...