Where Everybody Knows Your Name But You Can't Feel Your Toes

We have a regular Tuesday bar night with friends - three other couples and one dude whose wife likes us but not enough to see us once a week when she could be embroidering something or playing video games, and a more-recently-added divorced woman. If I recall correctly, many many years ago I said to Collette "you know how in tv shows people just, like, go out for a beer? Do people do that in real life? We should do that in real life." A few days later she called me on her way home from somewhere and told me to meet her at a nearby bar/restaurant and we had a beer and it was fun. We started roping other people in, and of such mundane beginnings are years-long traditions born. We went to that bar for years, through four or five waiters/waitresses (Bridget, Derek, Riley, Samantha...) and then it closed (rude!) and we were nine characters in search of an author for a bit (funnily enough we ended up at the Barley Mow once and were waited on by Riley's girlfriend). A few places didn't work out for one reason or another. A new place eventually opened in the old location, which is prime - some of us can actually walk to it - but it has trivia nights on Tuesday, which we did once and it was fun, but we didn't want to have such a structured thing every week.

We finally settled on one of two Broadway Bar and Grills. There's a nice big round table we can usually snag, the wings are good, and the wait staff was starting to remember us (the first time Bridget said "am I bringing you a Stella, Allison?" I nearly wept with joy. Then fucking Covid entered stage right.

In lockdown we did Zoom bar nights. The first couple of times were fun.  People wore funny hats. People put up funny backgrounds. It was nice to see other faces. 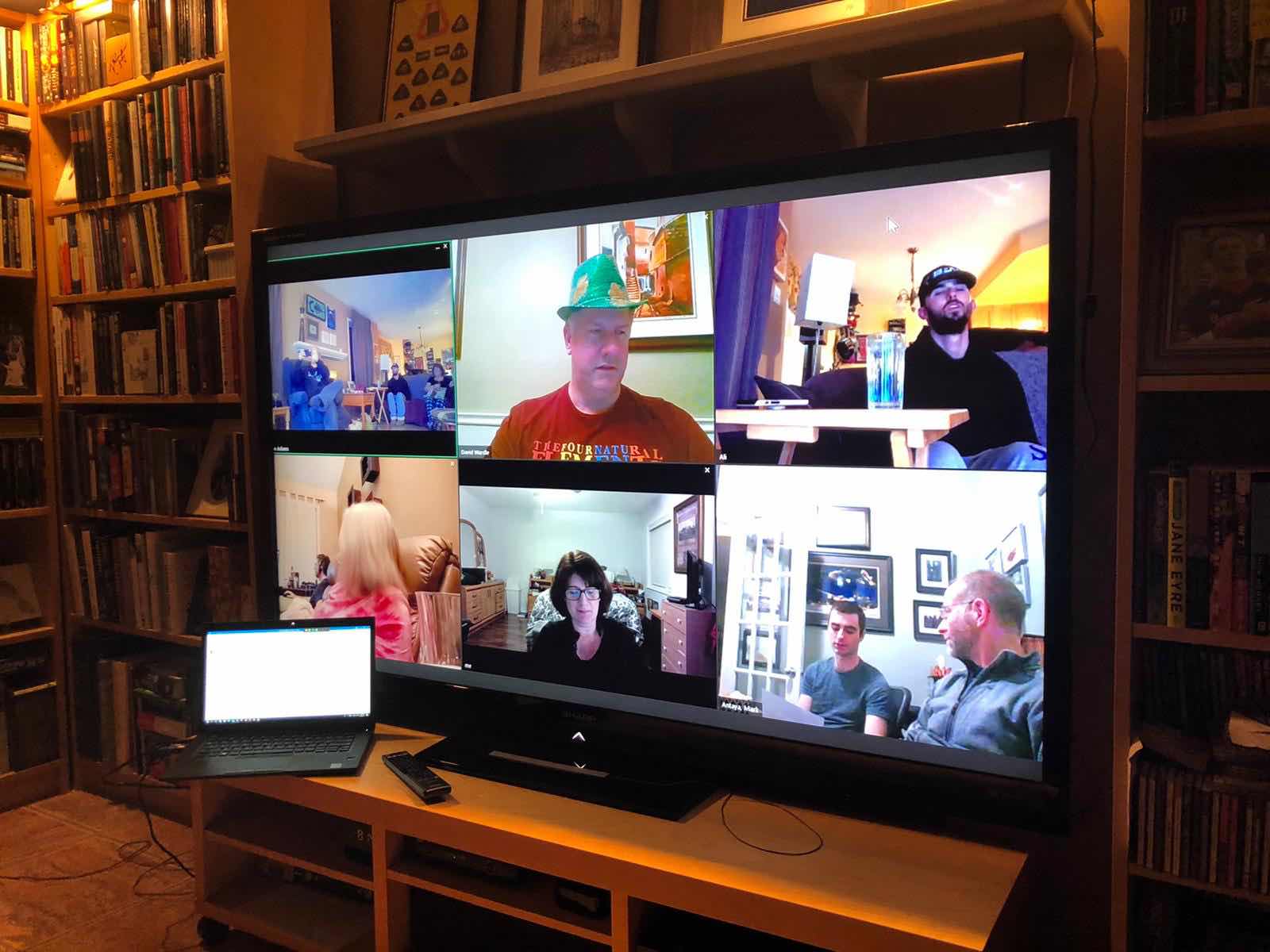 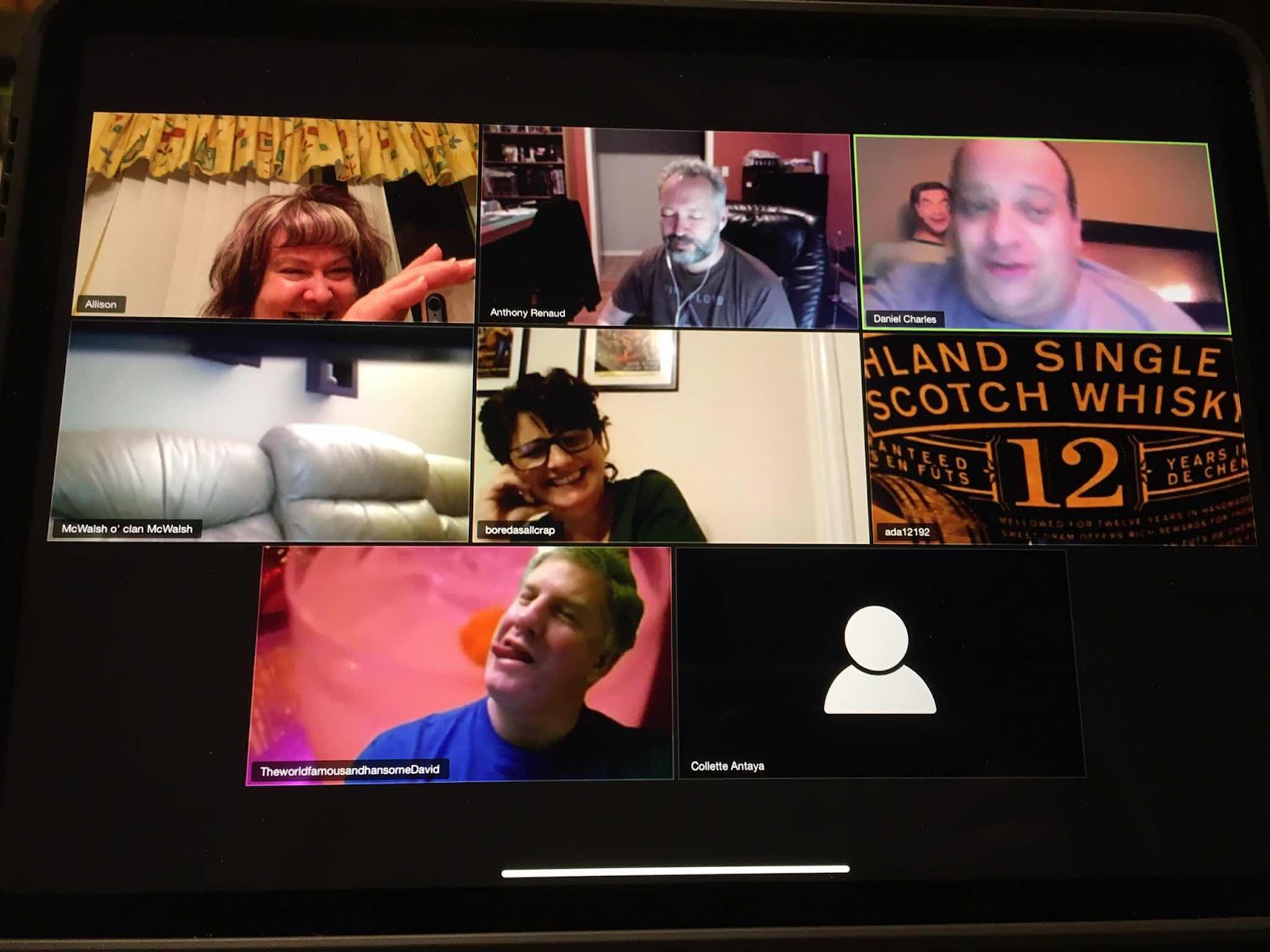 But it got old fast. There were technical difficulties. Only one person could really talk at once. Jokes that would work in person were inaudible or fell flat in this medium. I hated having to stare at my own face - I couldn't stop fiddling with my computer trying to find a more flattering angle (Remember the movie Tootsie? "I'd like to make her look a little more attractive, how far can you pull back?" "How do you feel about Cleveland?") After a few weeks I started dreading and then avoiding Zoom bar night. It would end up making me feel bad about myself and dislike people I actually love.

So the minute we could meet outside, we did. People brought their own coolers with drinks and snacks and couples sat six feet away from each other - only two people's backyards were big enough to facilitate this, so we rotate between those two. Over the summer was great. One night we were sitting there and Collette said she could hear four different conversations going on and she was so happy.

Dave would pretend to freeze once in a while in case we got nostalgic for Zoom. 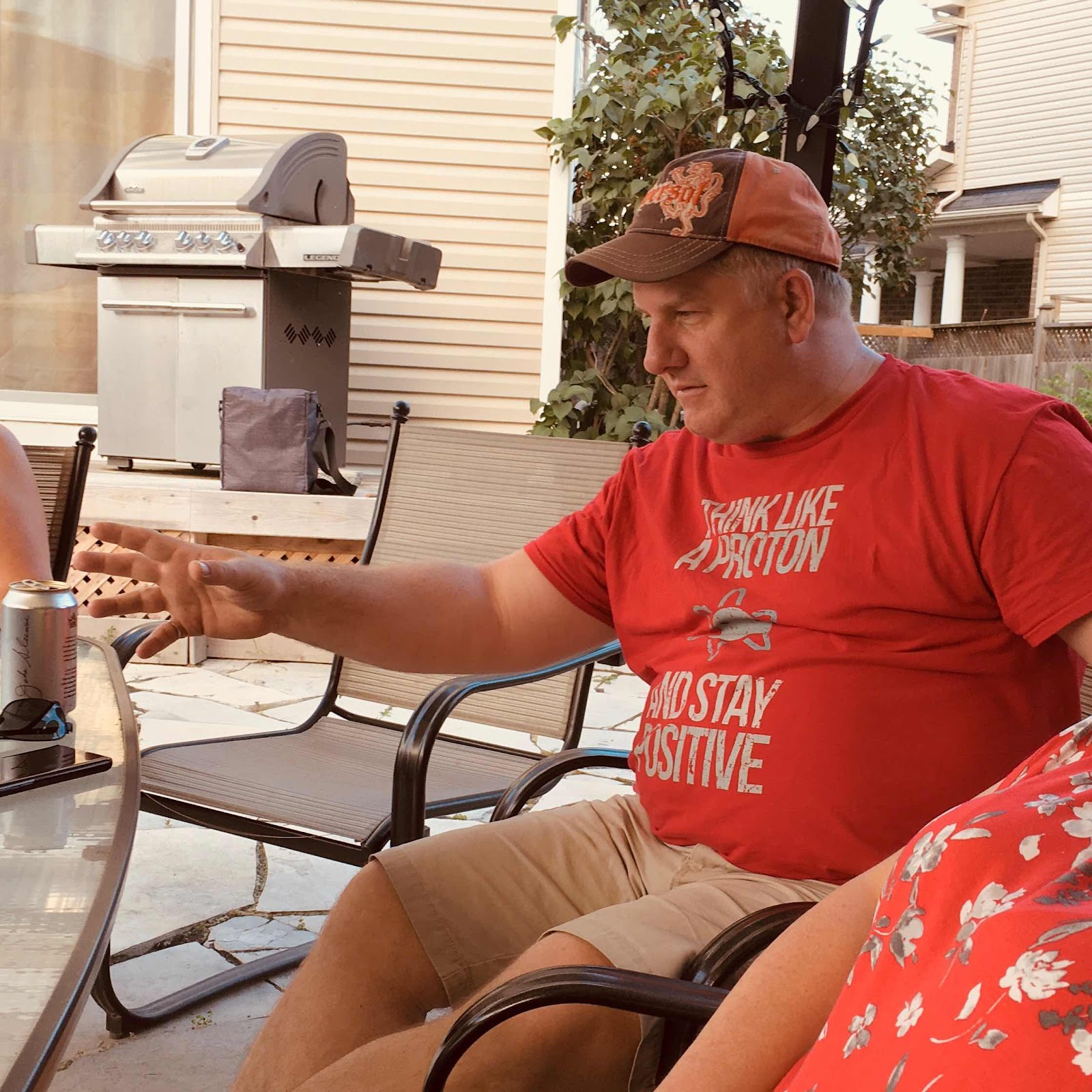 Of course, there was the inevitable reality that Winter Was Coming. What would we do?

Well, we're Canadian. We slapped on some layers and and it was business as usual. 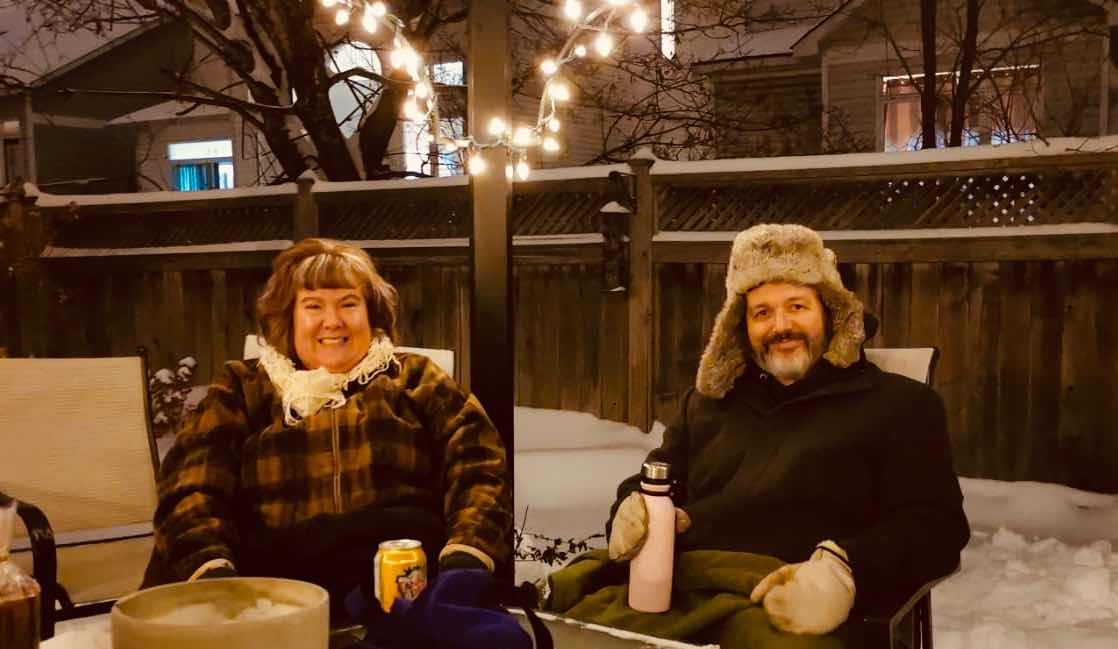 A few days ago Collette sent a message in the What's App saying we were supposed to bake pumpkin pies this week to test whether fresh or canned pumpkin made a better pie. I had no memory of this being broached and I was briefly annoyed - it's almost December! I have Christmas baking to start! I don't bake pies! - and then I remembered that this is why I love this group - we do weird random shit all the time and it keeps life fun and interesting. But I also felt like being a rebel and not doing exactly what I was told so I decided I would bake a pumpkin cheesecake instead. Then no one could find any pie pumpkins in stores, so only Collette was going to bake a pumpkin pie, but by now I was invested in baking a pumpkin cheesecake. 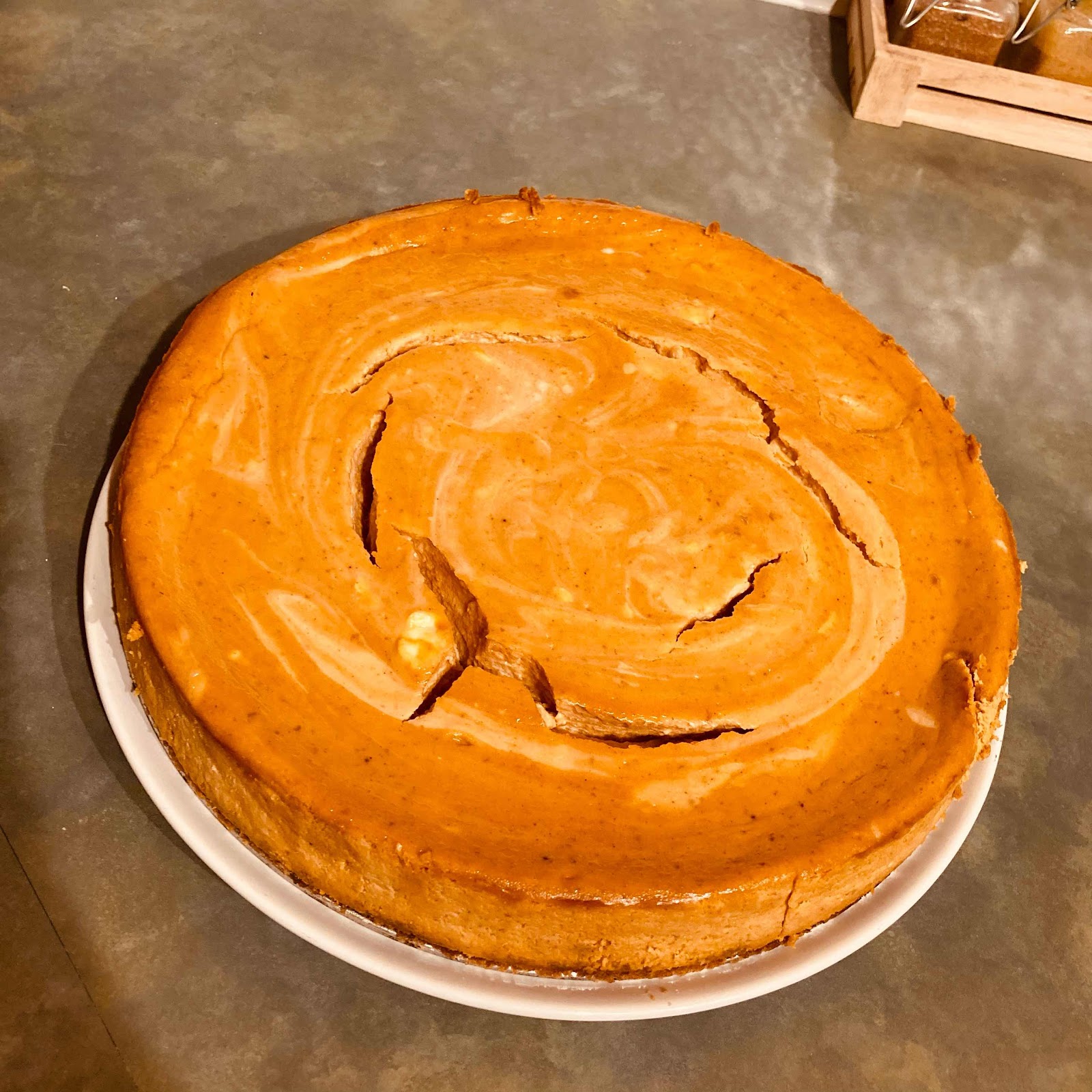 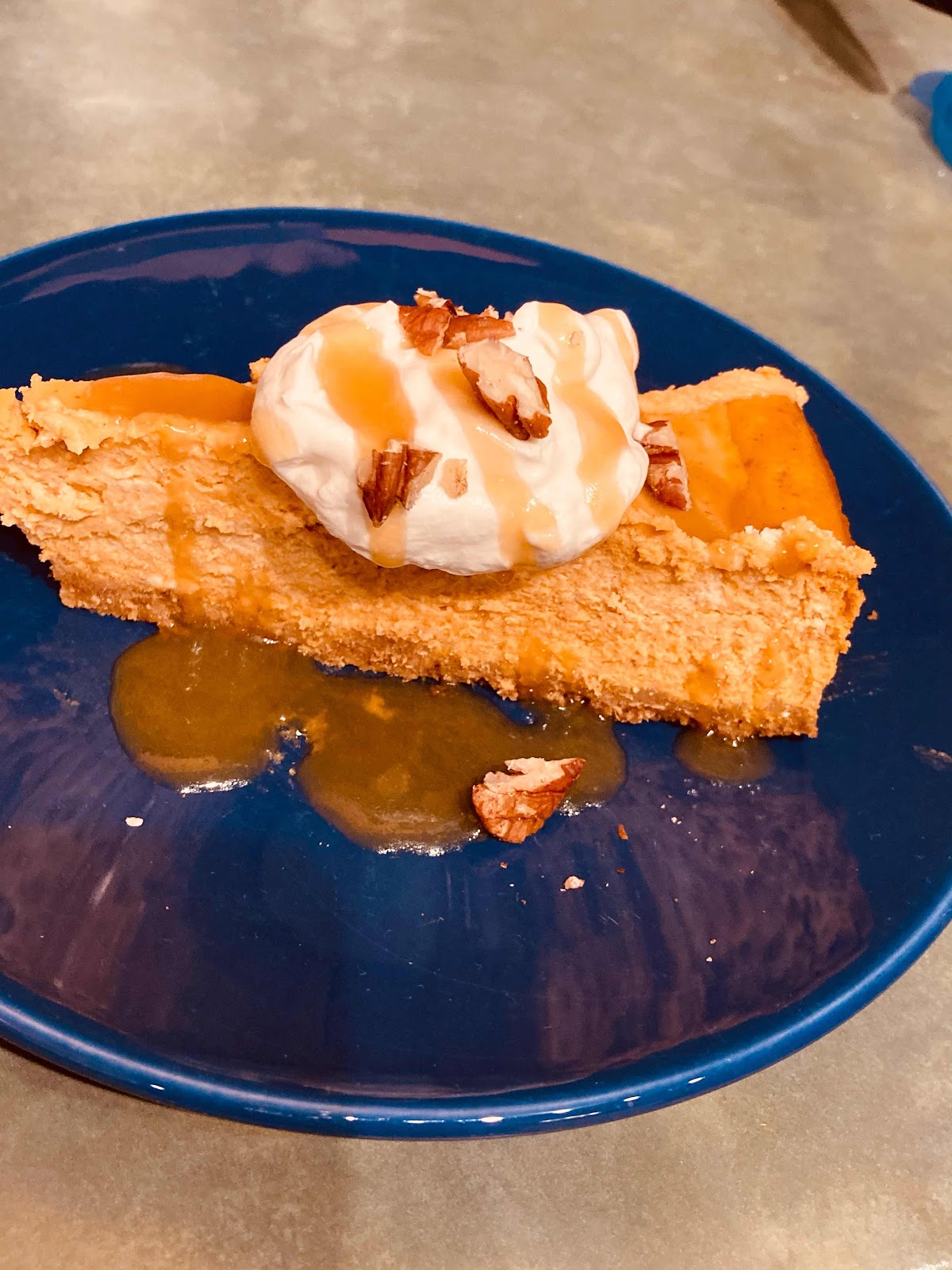 The plate was just for a glamour shot - I divided it up into tupperware with plastic forks for each couple. Collette made an Alton Brown pumpkin pie that was really good and a weird-ass pumpkin pie from the sixteen hundreds with eggs and rosemary and thyme and apple and currants that was... still actually really good. We ate quickly and put our mittens back on. It was freaking cold tonight. I'm sort of achy this week and the cold and rain made it a bit worse, and I'm not entirely sure how much longer we can keep this up. It's sort of weird but oddly fun to have to come home and thaw out from bar night, and the more we can keep seeing our friends the better our mental health generally is.

Does anyone know where I can get one of those Saint Bernards with a whiskey barrel around its neck?

Ernie said…
First, I did a double take when I saw a new post. Could it be? Hooray.

I loved learning the background of your bar night. So funny that you almost wept when the waitress knew your drink. And yes, you MUST be Canadian to sit out in the cold. I don't think I like anyone enough to freeze my butt off to visit with them. ;)

I've gotten together with friends only twice since March. I really should do it more (and should have taken advantage of the warmer weather).
December 2, 2020 at 6:35 AM

Our new 'hood in GA does this on Friday nights. They do a socially distanced meet up in someone's driveway each week. You bring a chair and a drink and just visit for an hour or so; I love it!
December 4, 2020 at 10:50 AM

Shan said…
We have a group of friends that meets once a month and the zoom thing is such a pain in the ass. The cheesecake looks amazing. Not a fan of pumpkin pie, but I will take a pumpkin cheesecake all day long!
December 10, 2020 at 4:54 PM