Surly Thursday Yes I Know it's Friday SHUT UP

I took a big old handful of melatonin last night because this week has been FUCKING FRESHLY-SQUEEZED HELL for sleep. I slept in way too late, which SHOULD have made me happy but I felt guilty even though this was precisely what I was shooting for. I got up and decided to go for a walk. I didn't take my phone because living in the moment, blah blah blah. These are the things I saw that would have made amazing photographs: a beautifully-shaped tree, stripped branches crisp against the sky, with a black bird perched at the very top knowing damned well he was cutting the finest of figures; a line of geese flying south, their bodies driving smoothly across the sky, their wings moving like clockwork and flashing in the sunlight like metal; a splendidly dressed outdoor Christmas tree.

Yes yes I know, beauty in the ephemeral, I saw it with my mind and it can live in my memory, HELL NO, my memory is garbage, I am bringing my phone EVERYWHERE from now on.

My feet and back hurt. They usually hurt more at this time of year, what with the baking and hunched-over Christmas-card writing, and also inevitably some school's library tech has some kind of emergency and I have to work a bunch of extra hours on my feet, and I don't really want to do it because it will hurt, but I want to because it's fun and also money, and it always is fun and does hurt, but usually at this time of year my feet and back hurt because of EXTRA MONEY, is what I'm saying, and this year it's just regular old senescence.

Usually I print out a bunch of wallet-sized photos on our printer to stick in Christmas cards. I forgot that I have a new computer this year because Matt bought me a Chromebook for Christmas last year (which I appreciate, it's been great for the most part) and for some reason it seems that Chromebooks don't have the capacity to print multiple pictures on one sheet - I could be wrong, but the people on the message boards don't seem to have any suggestions. So I ordered prints from Black's, not as early as I would have liked, but it should have been early enough. They said to expect shipping delays, which fair enough, but they haven't even shipped, a week and a half past when they should have. First world problems, but not impressed, especially for blaming the pandemic for poor business practices. I've always resisted printing a photo Christmas card, not because I don't love getting them, but because I like buying boxes of Christmas cards and writing a little something in each one. At least next year I'll know to order extra early, and not from Black's, hmmph.

But on the way home from my walk, I realized that, although we don't have a tree anymore, we have a giant saskatoon berry bush and a hydrangea, so I actually DID have somewhere to hang the outdoor Christmas ornaments my parents gave us. 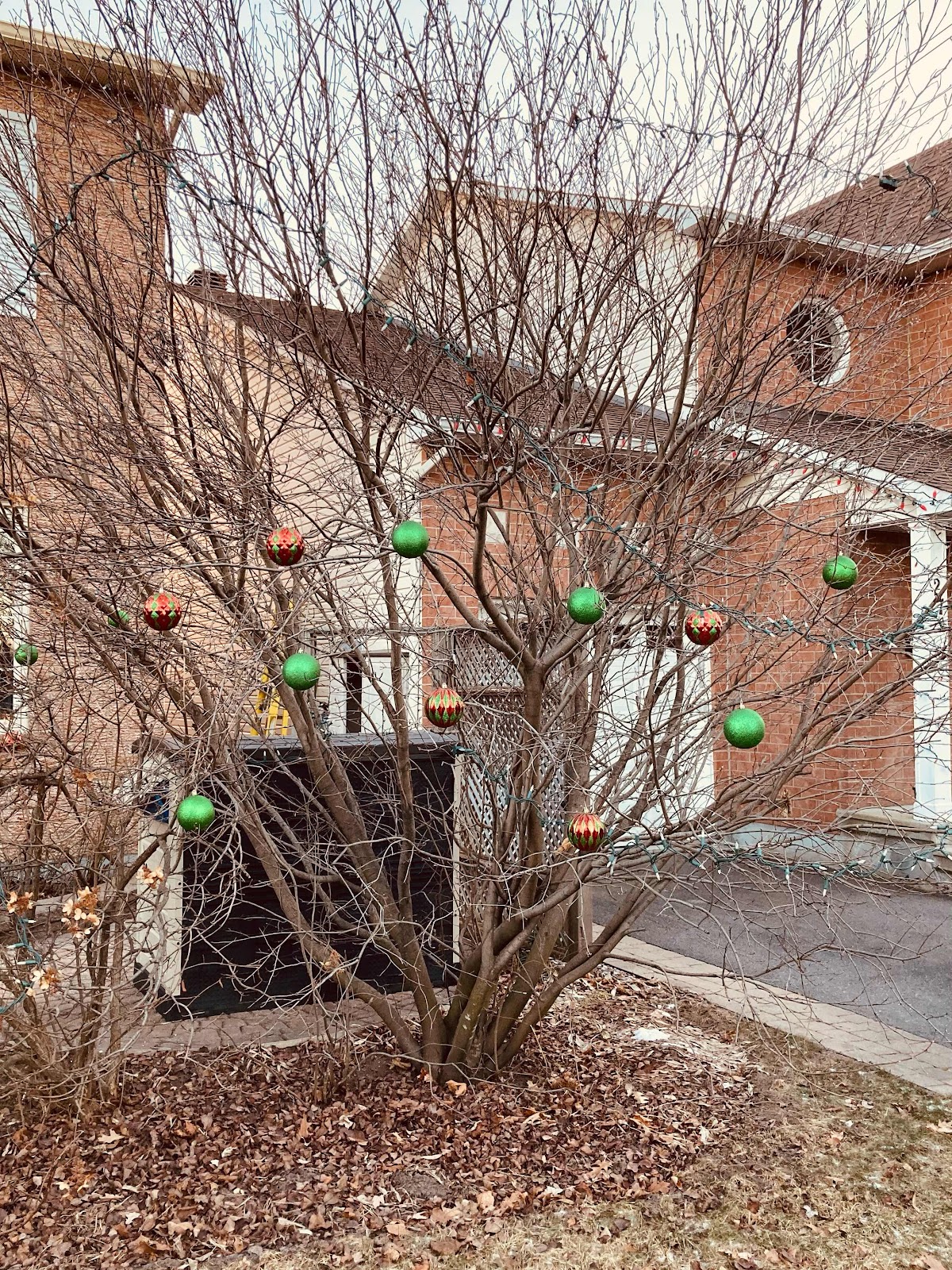 Then we had pizza with the kids and watched Die Hard four (Live Free or Die Hard hee hee hee) which is definitely NOT a Christmas movie, but was very fun and had Bruce Willis AND Timothy Olyphant, yum - surprisingly it had an eighty-plus Rotten Tomatoes rating. Die Hard five (A Good Day to Die Hard, HA HA) is also available but the Rotten Tomatoes rating is like six - we're still going to watch it, obviously, but we'll keep our expectations low.

Then Eve and I turned on all the twinkly lights in the house and started gingerbread construction, because she and her friends have this gingerbread house tradition, (also here) and apparently it's going forward even if it has to be outside in December and everyone has to have their own house, and there isn't a gingerbread house kit to be found in the city - I'm a little embarrassed to admit how long it took me to think "um, I can just bake gingerbread like I do every year, but, like, wall and roof shaped". 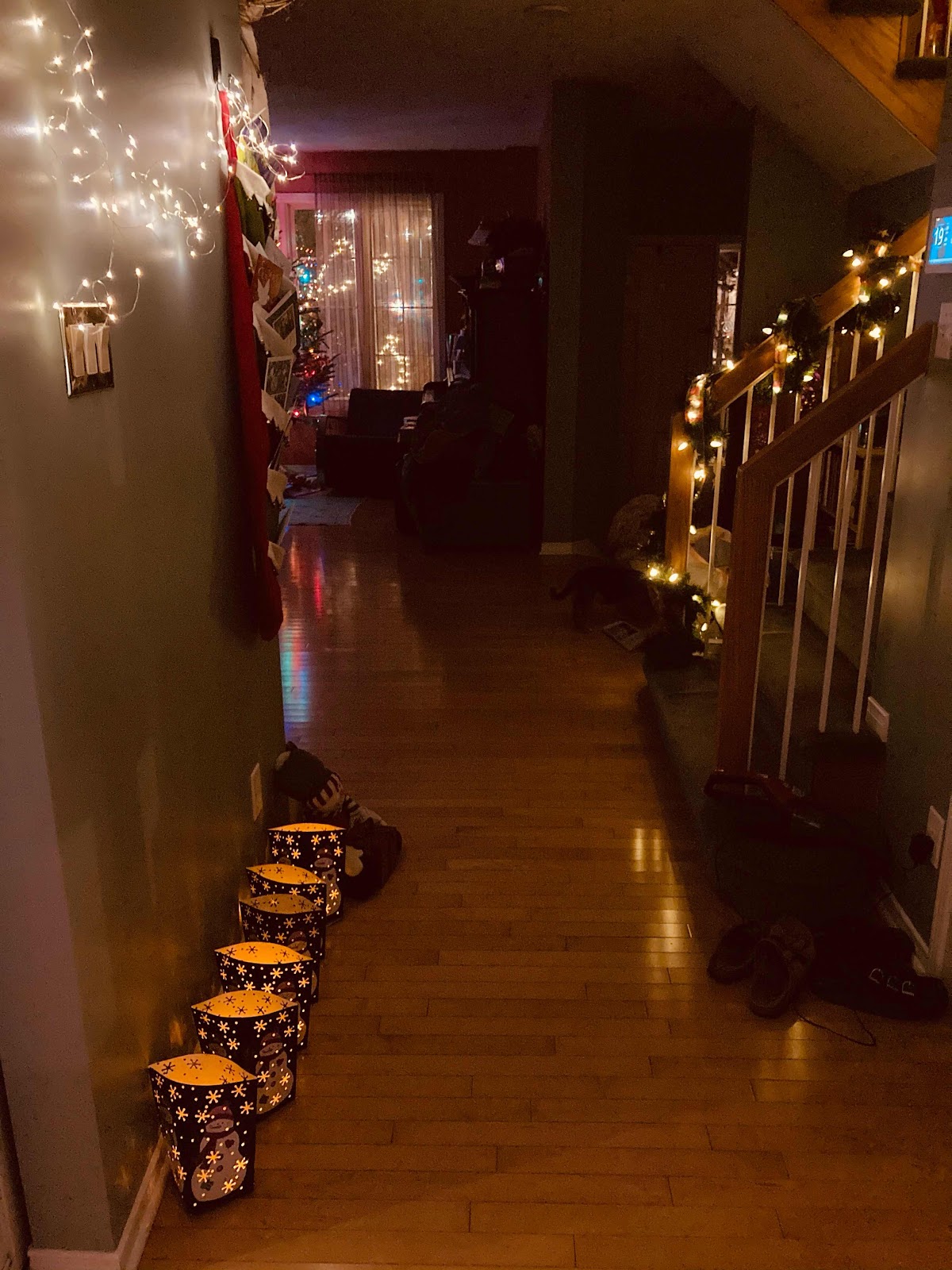 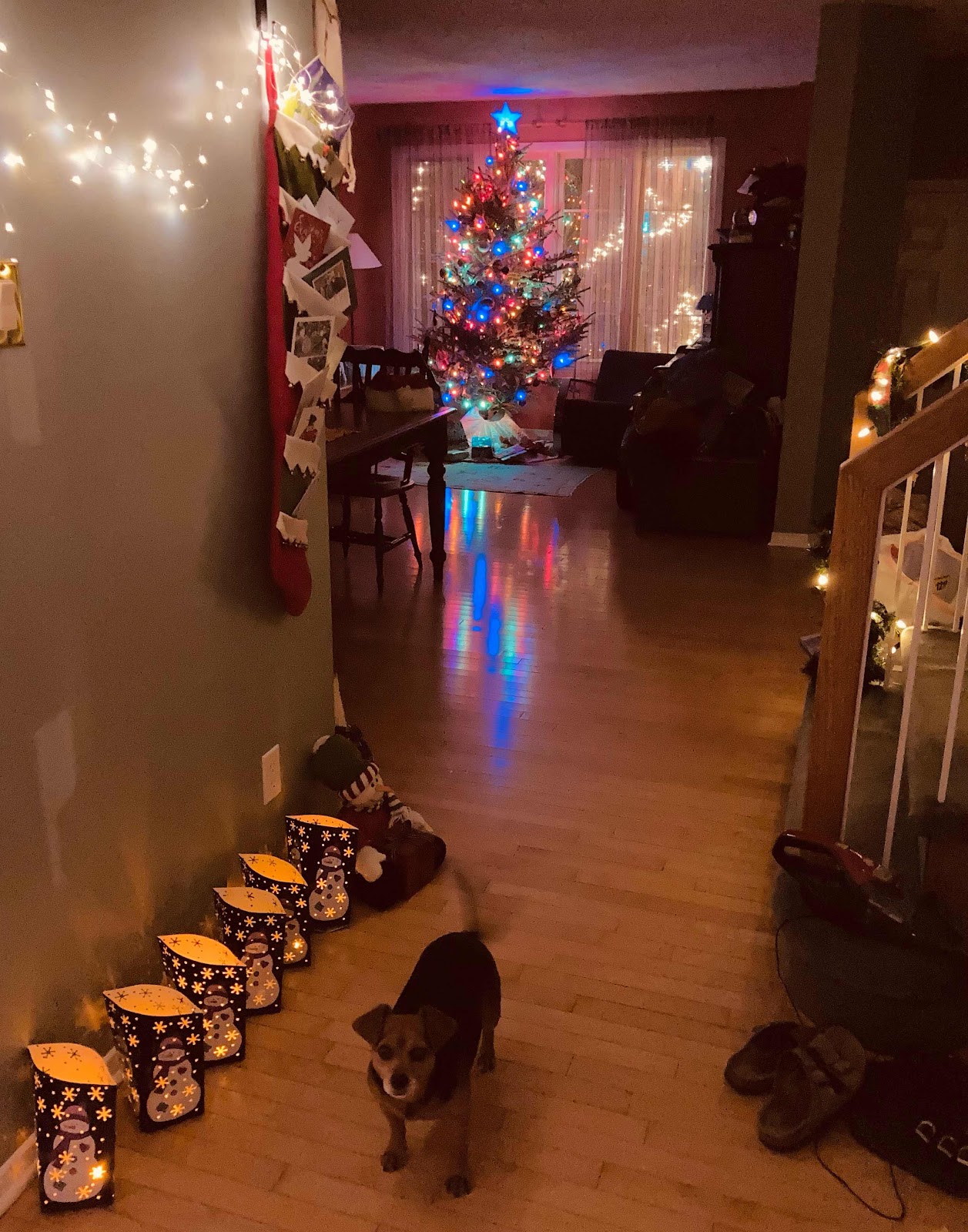 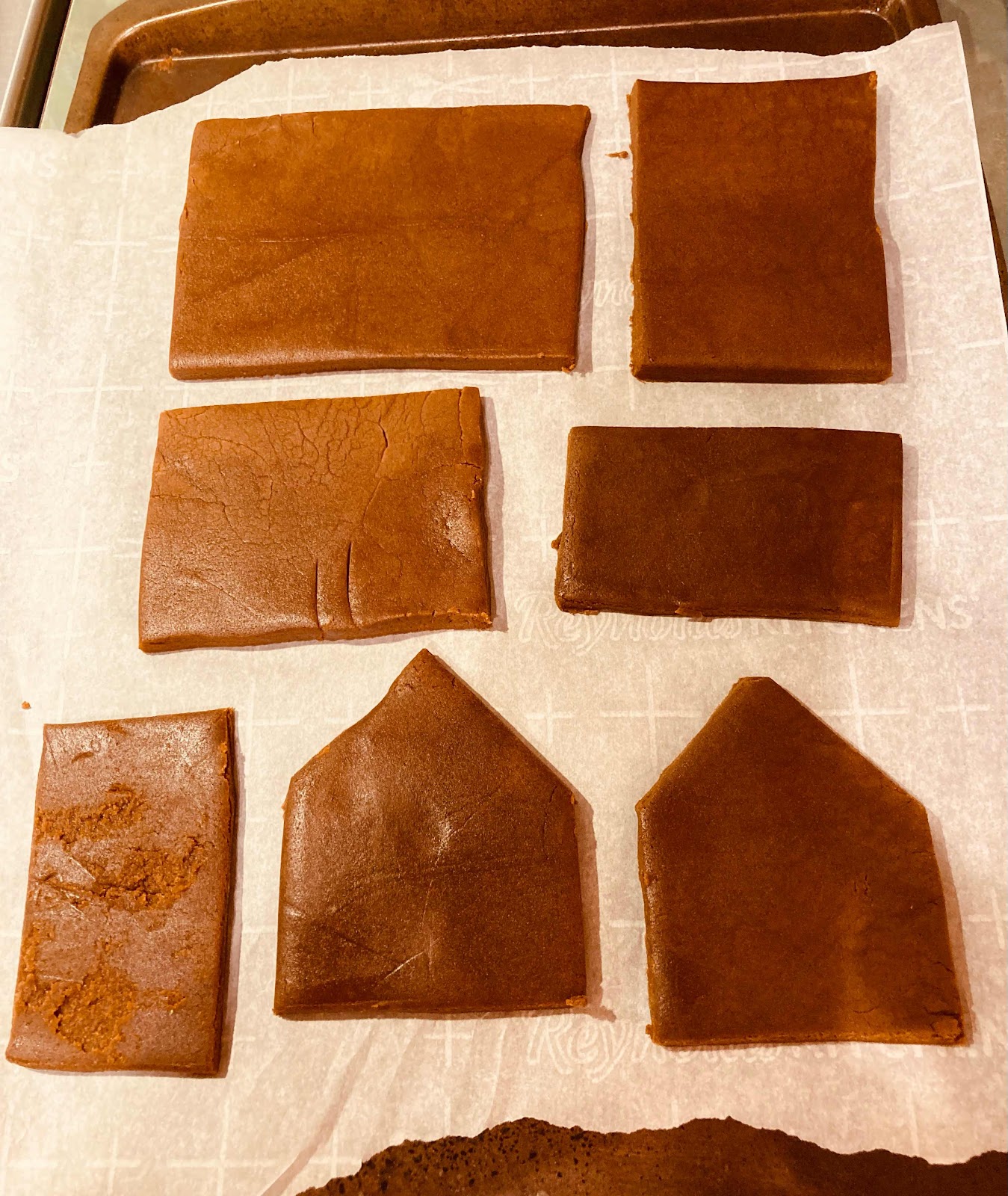 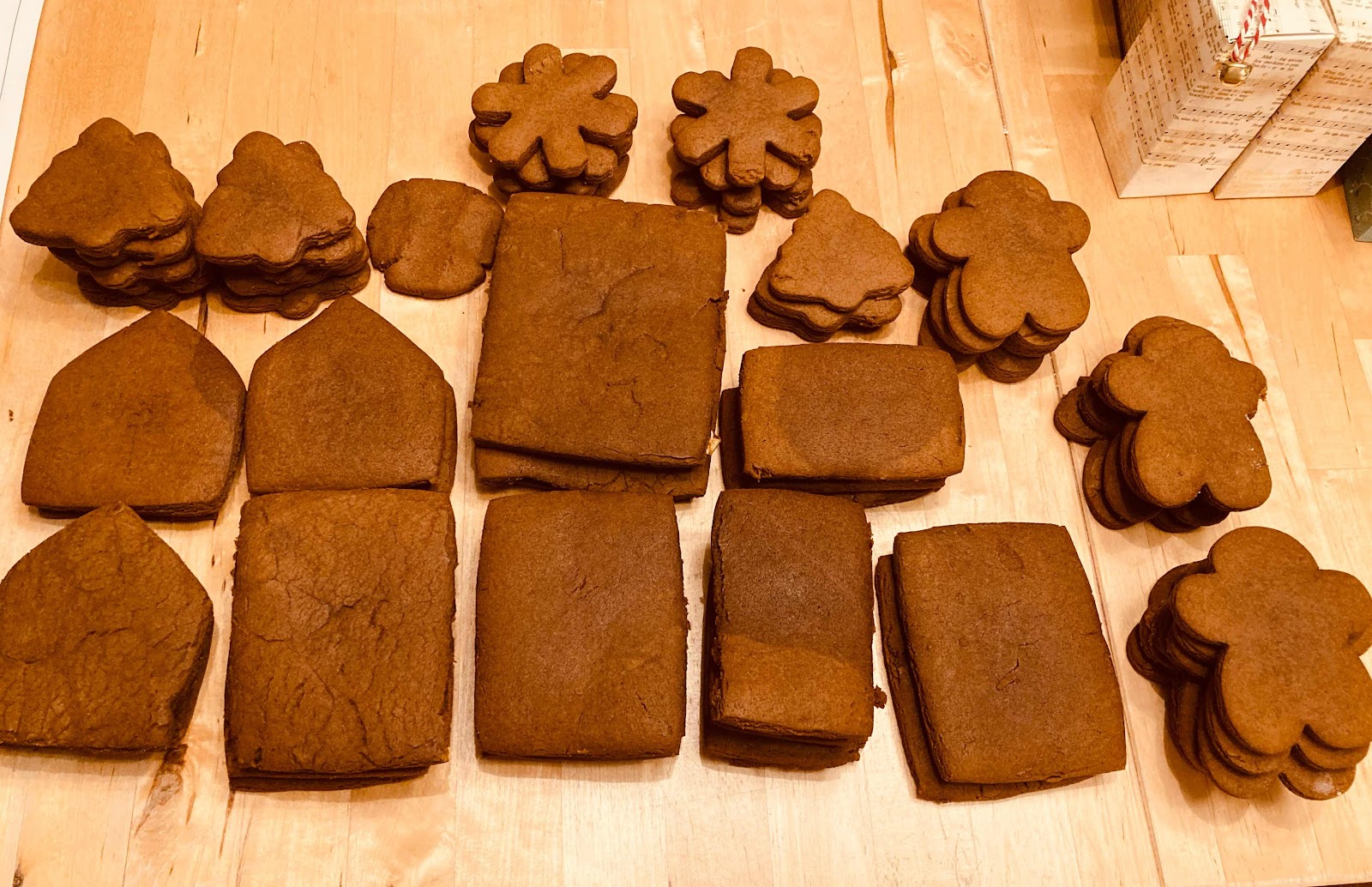 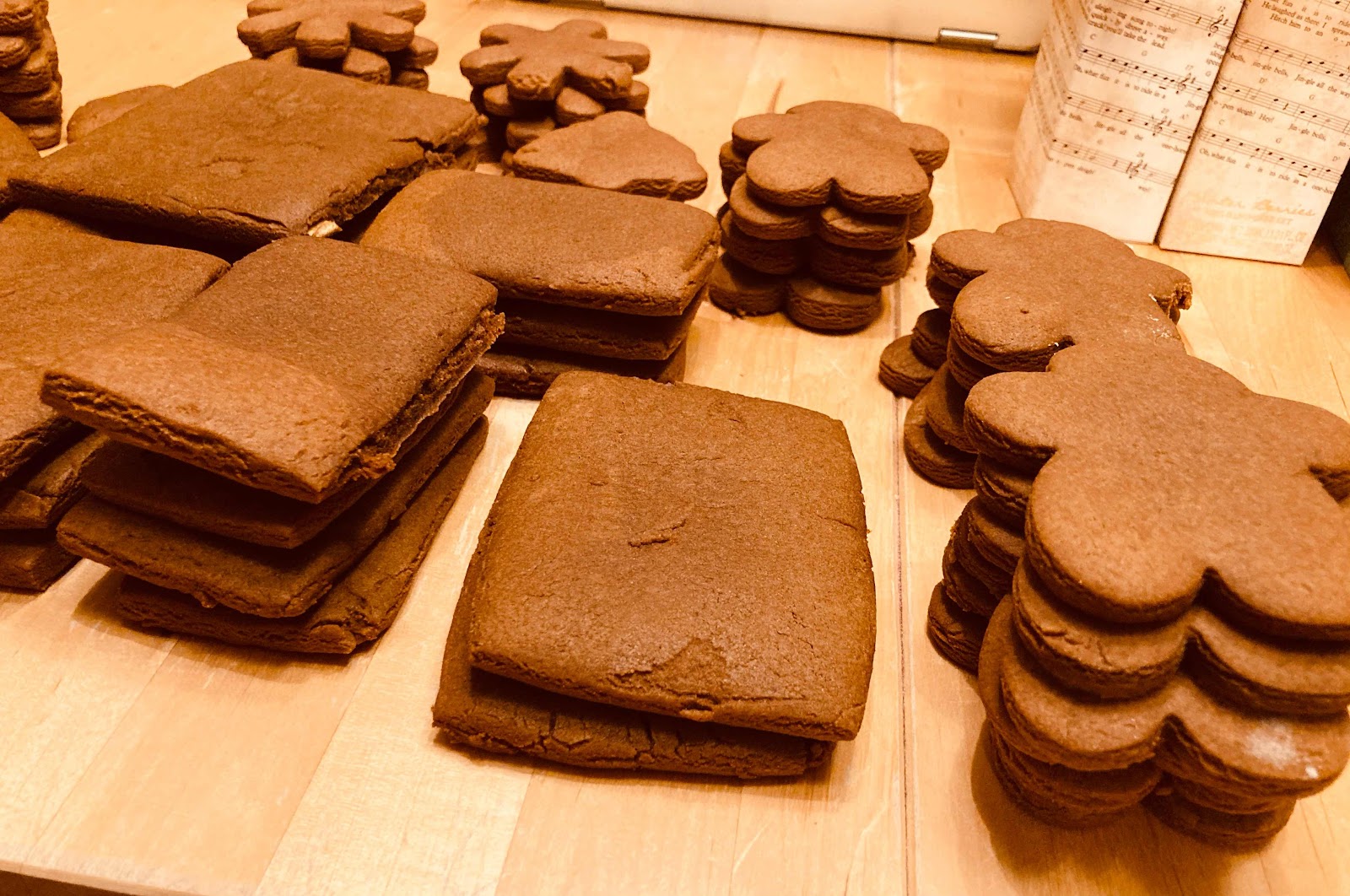 A little despair, a little hope. A little surliness, a little gingerbread. A house made with love that will probably collapse. Seems about right for this time of year.

Sasha said…
I love your Christmas lights and I love that blur that is Lucy's tail and I love your Surly Thursdays and please feel free to have them any old day of the week.
December 19, 2020 at 7:07 AM

StephLove said…
I'm glad Eve is carrying on with her gingerbread house party. It would have been sad not to do it.
December 20, 2020 at 7:41 AM

Ernie said…
"My memory is garbage." I think I laughed so hard at this because I relate too well. I never would have thought to make gingerbread. You rock. The photo is so pretty. Love the stocking Christmas card holder. I agree, your surly posts are welcome anytime.
December 21, 2020 at 4:38 AM

Nicole MacPherson said…
Oooh your house is festive! I approve of the outdoor tree too. I admire you making the actual gingerbread! I just buy the premade kits, the ones that are already built.
December 22, 2020 at 4:36 AM