There is actually a Netflix Show with this title now which totally ripped off how I used to sign off on my Christmas cards because sometimes I can't bring myself to use conventional greetings or valedictions.

We didn't have snow (in fact, the boys played catch earlier in the day) and we didn't have my sister and her family, but we had settled down to that, and otherwise it was a really nice Christmas. Angus is here and my parents came on Christmas Eve and Christmas day. Christmas Eve we do finger foods and we played the Boomers vs. Millennials Quiz Game and everyone actually knew some answers, which was good, and the wrong answers were even funnier, which was better (What movie did Jodie Foster win her first Academy Award for?" my dad: "S....Streetcar... you know... she was a prostitute" Me: "Do you mean Taxi Driver?" My dad: "streetcar, taxi, whatever" (It was actually The Accused). There was a question about a British graffiti artist and Angus answered 'Banksy' and I was shocked and he said "that's the only British graffiti artist I know", as if I still wouldn't be impressed that he knew even one. I guess college has made him more worldly. 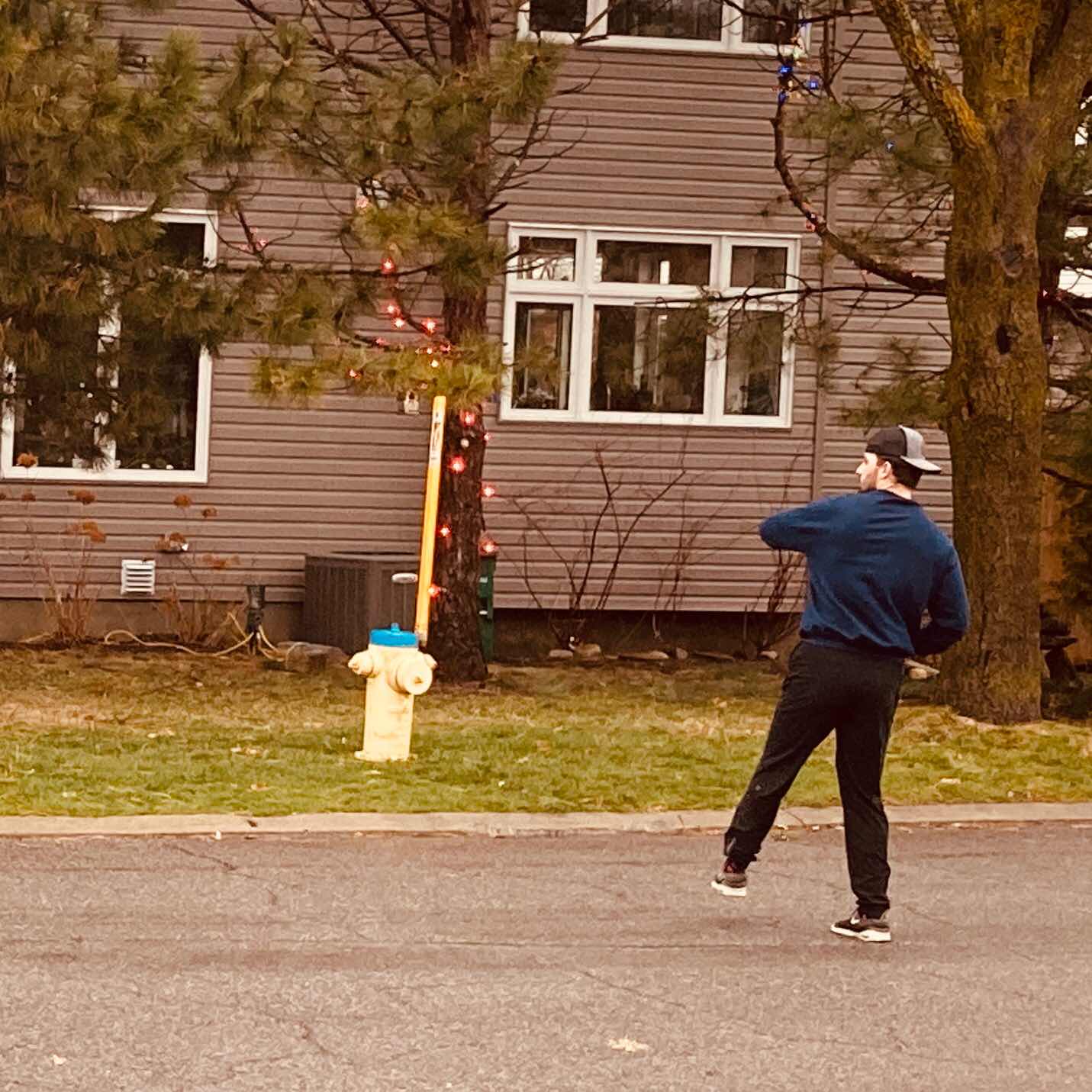 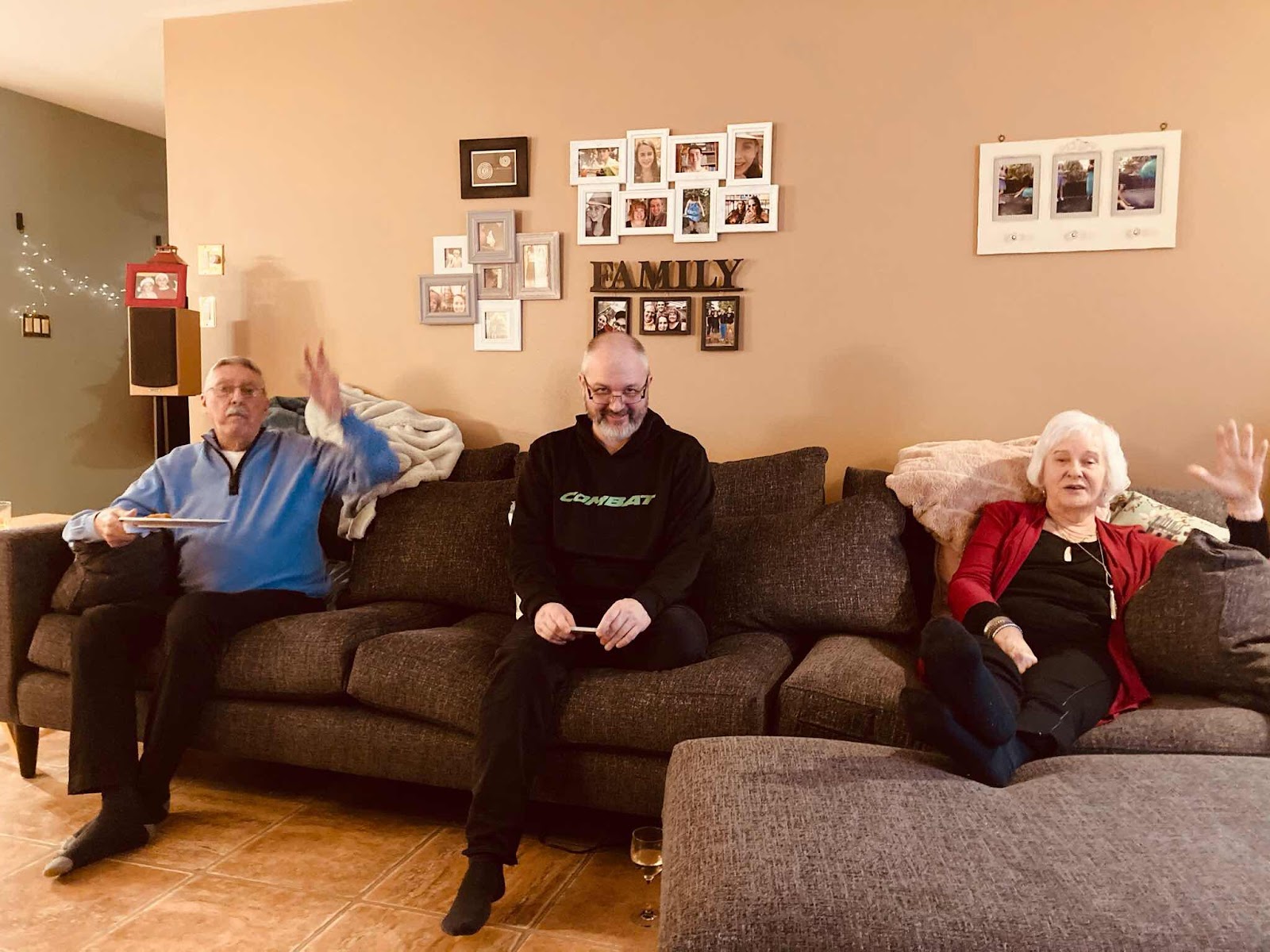 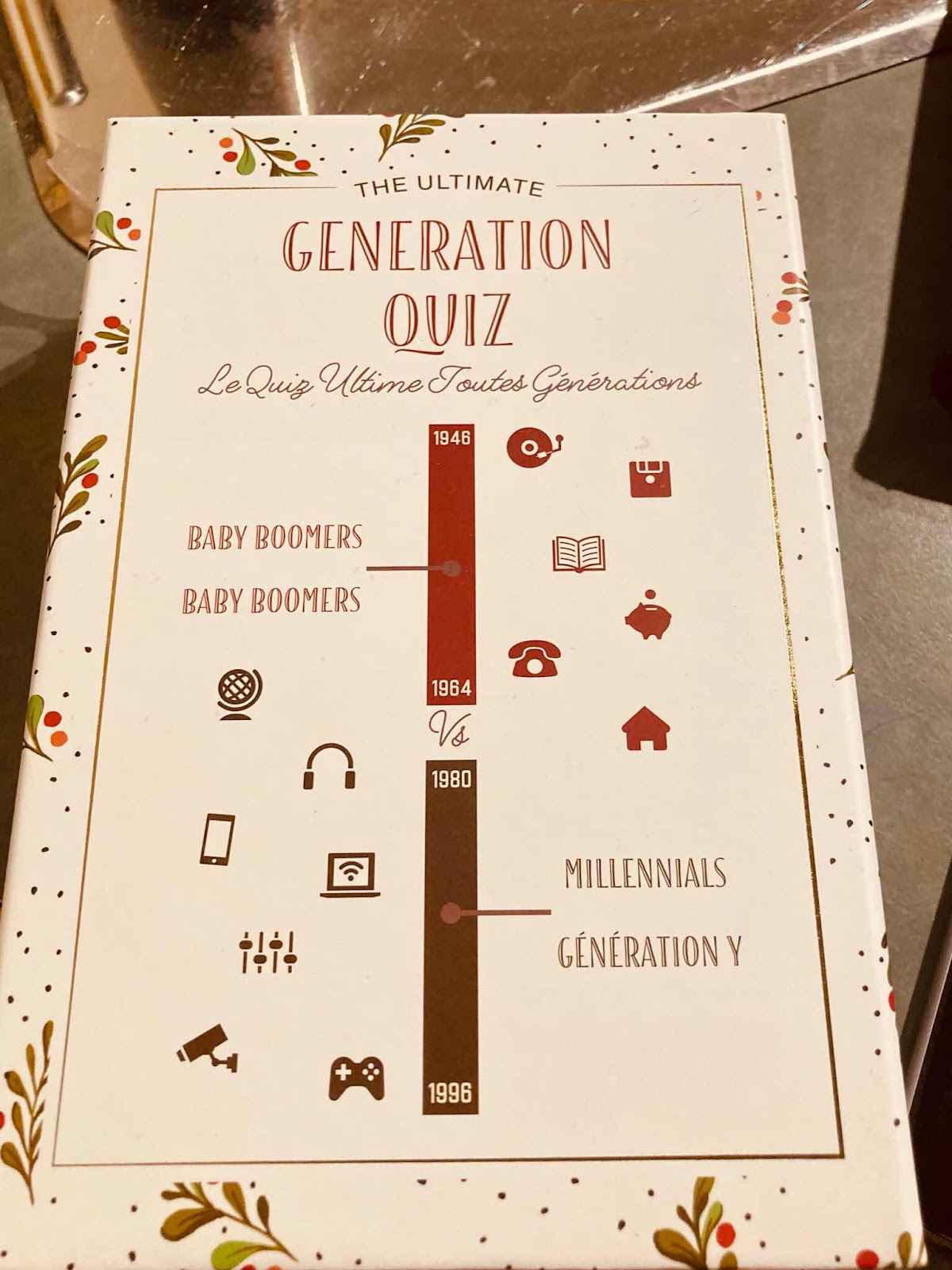 Then my parents and the kids exchanged gifts because my parents wouldn't be there the next morning. They gave Eve an Oodie, which she immediately put on and then was immediately irritated that Lucy thought this just made Eve into a giant walking Lucy Blanket. We got my dad some of those tiny chocolate bottles with booze inside for old time's sake, because I remember thinking they were the height. Angus got a new golf club - my parents helped him buy his first real set of clubs when he was home in the summer and using golf as a consolation for not being in New York playing baseball for the Geneva Redwings. He was very happy with it. 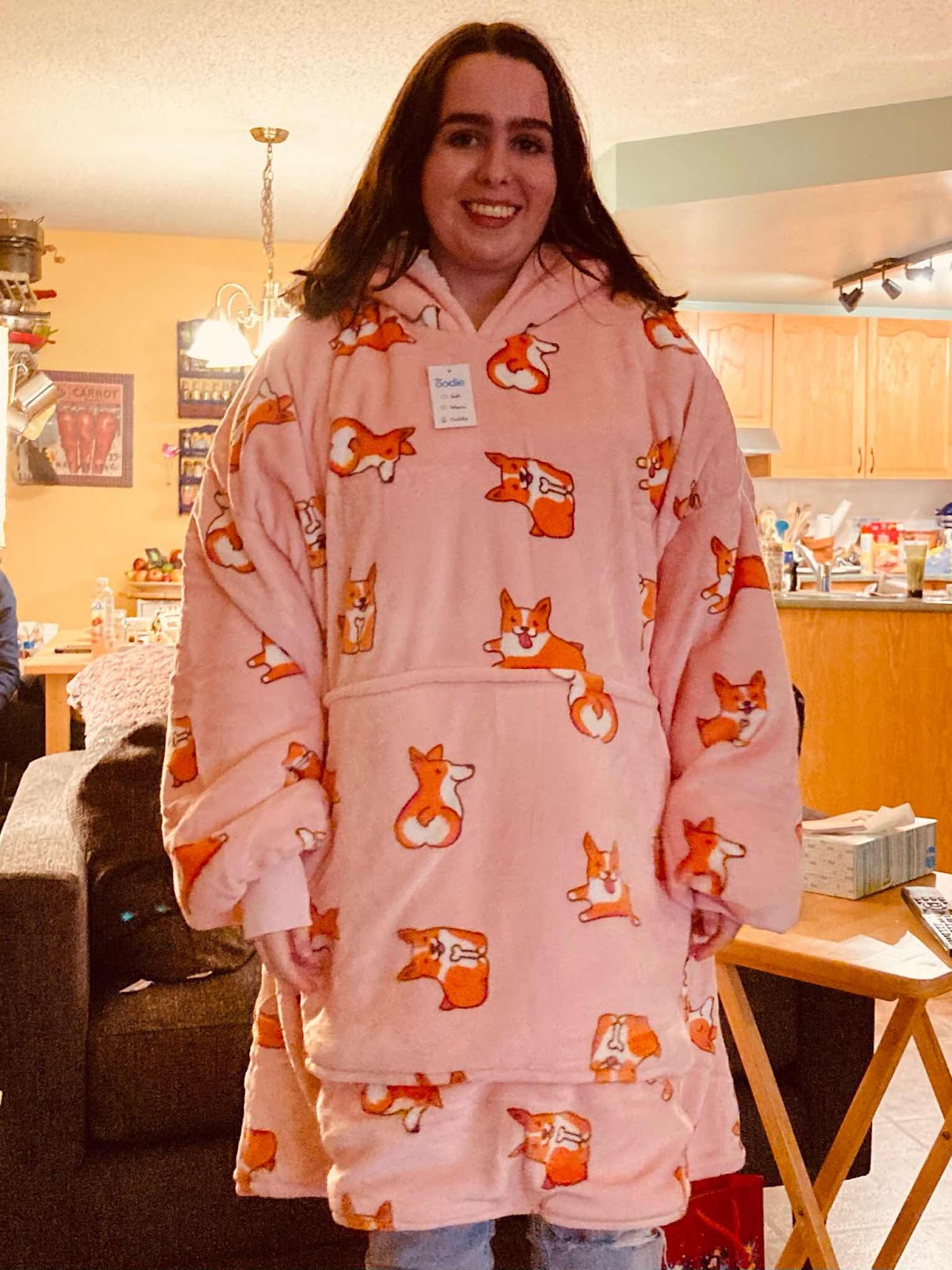 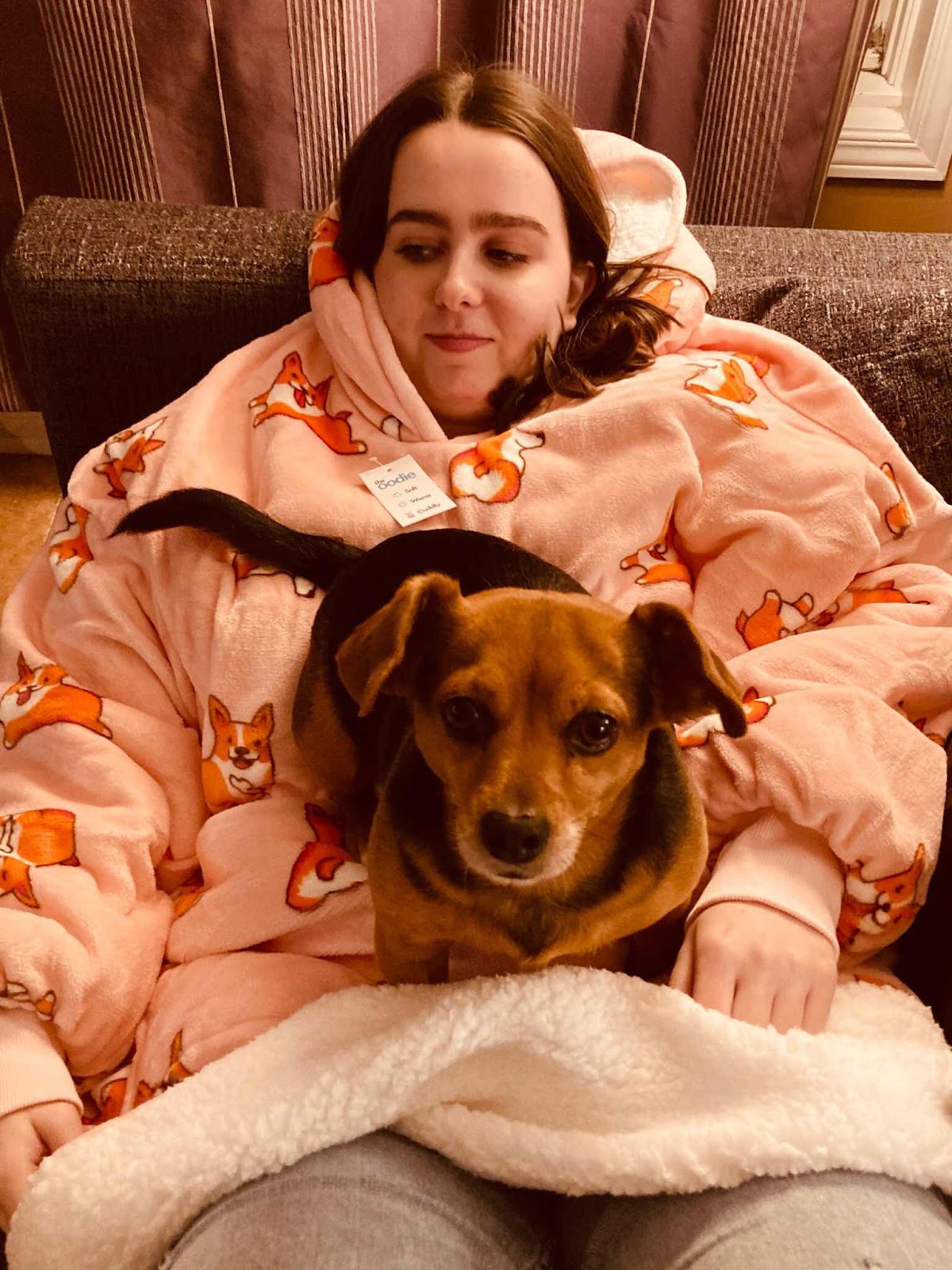 Matt drove my parents home and we hung out for a bit more and then the kids pretended to go to bed so I wouldn't have to stay up late and wait to put out the presents. I remembered the year I thought it would be fun and nice to wrap all the presents on Christmas Eve with a prayer of thankfulness that I am not that much of an idiot anymore. I realized that I had bought way too many presents again and consoled myself with the thought that 1)pandemic and 2)my kids are really nice, thoughtful, grateful, unentitled people despite my best efforts to turn them into monsters so whatever, we'll go minimalist next year (ha ha like fuck we will).

I was up before BOTH kids on Christmas Day which, for anyone who knows us is super weird. We made coffee and tea and waited until Eve came down and then woke up Angus. Their stockings are giant affairs made by my mom when they were babies, and I wrap everything, so opening the stockings is just as much fun as the big presents (and I still couldn't fit all the stocking stuff in the giant stockings, refer back to my Present-Buying Problem). There's always some things that I think are nice but the reaction I get is bigger than what I anticipated - this year it was the purple Black Panther golf balls for Angus that he thought were insanely cool. 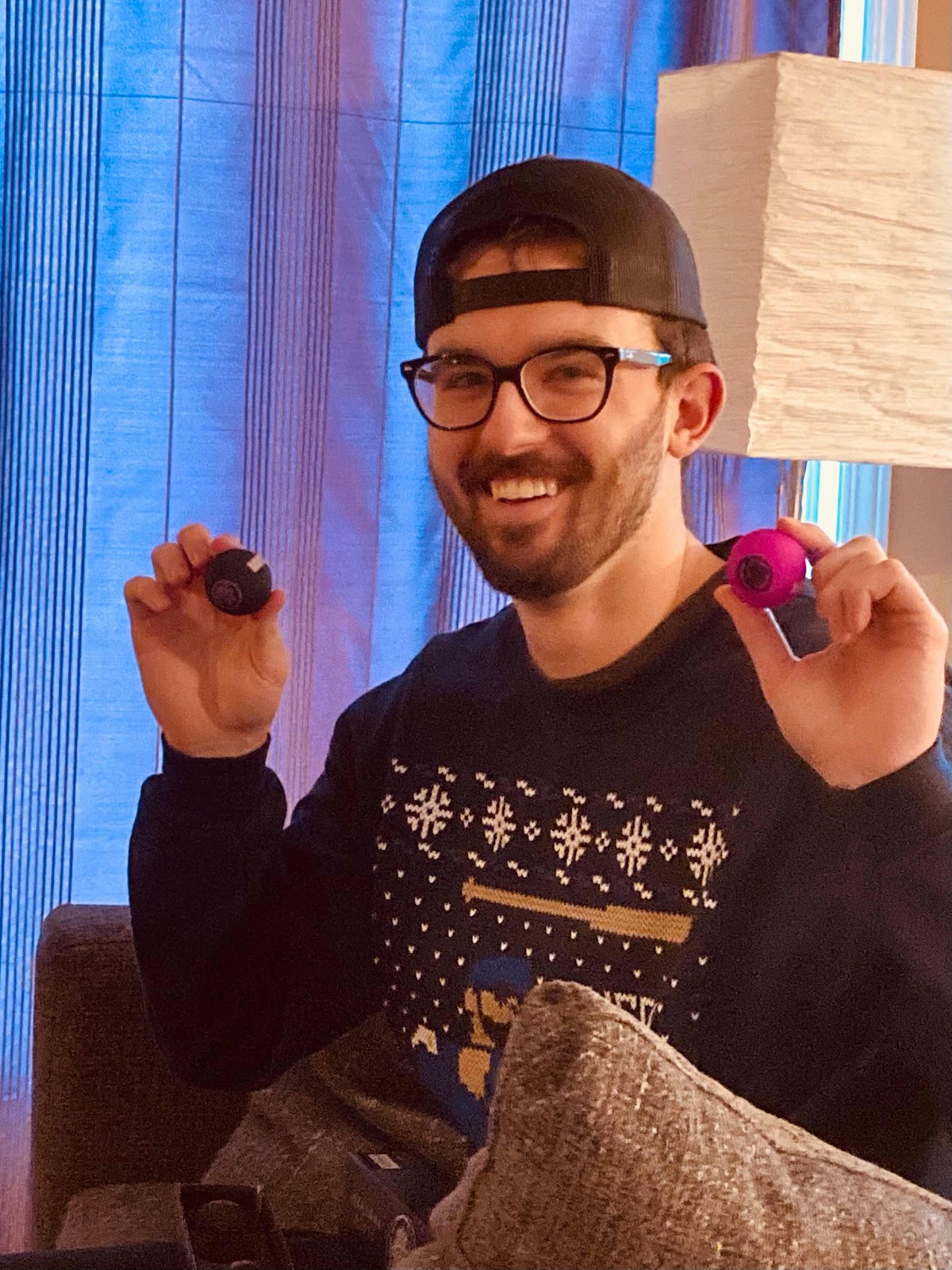 We facetimed my sister's family to open our gifts from each other, which was really fun. My sister got Morse code necklaces that spell out Fuck Off for Eve and me. I got her David Sedaris's Me Talk Pretty One Day because she is a chemo pharmacist in a hospital and I thought the short, hilarious essays would be good for her mental health. I got my niece this mug, which was a big hit, and my brother-in-law this shirt which we ended up getting for almost everyone because Matt almost asphyxiated himself laughing so hard when I found it. I also gave my niece a voodoo doll ornament to smite her enemies. My nephew we gave Cat's Cradle and my niece told him "oh, that's Vonnegut - if you read it in public you'll get chicks". 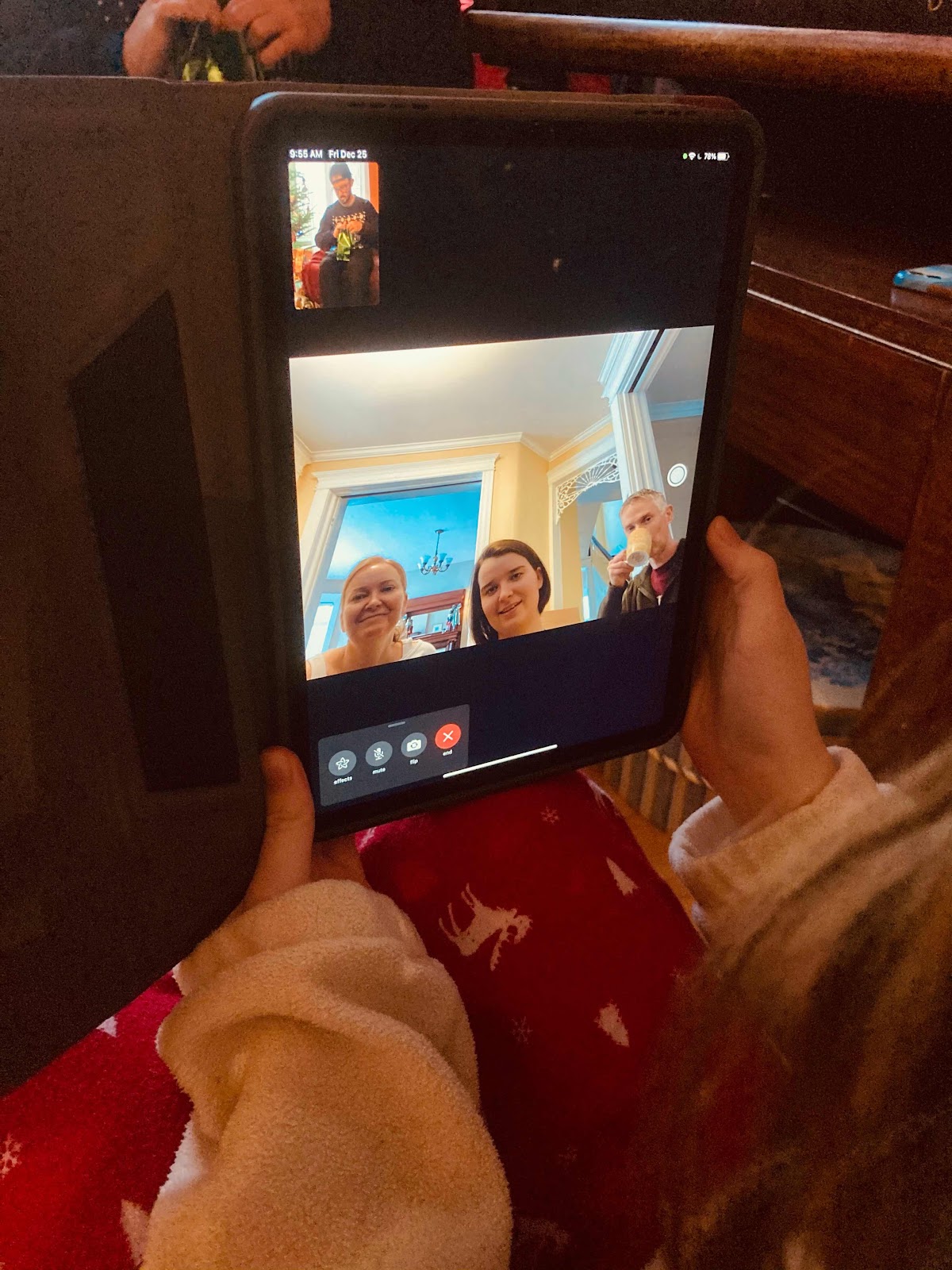 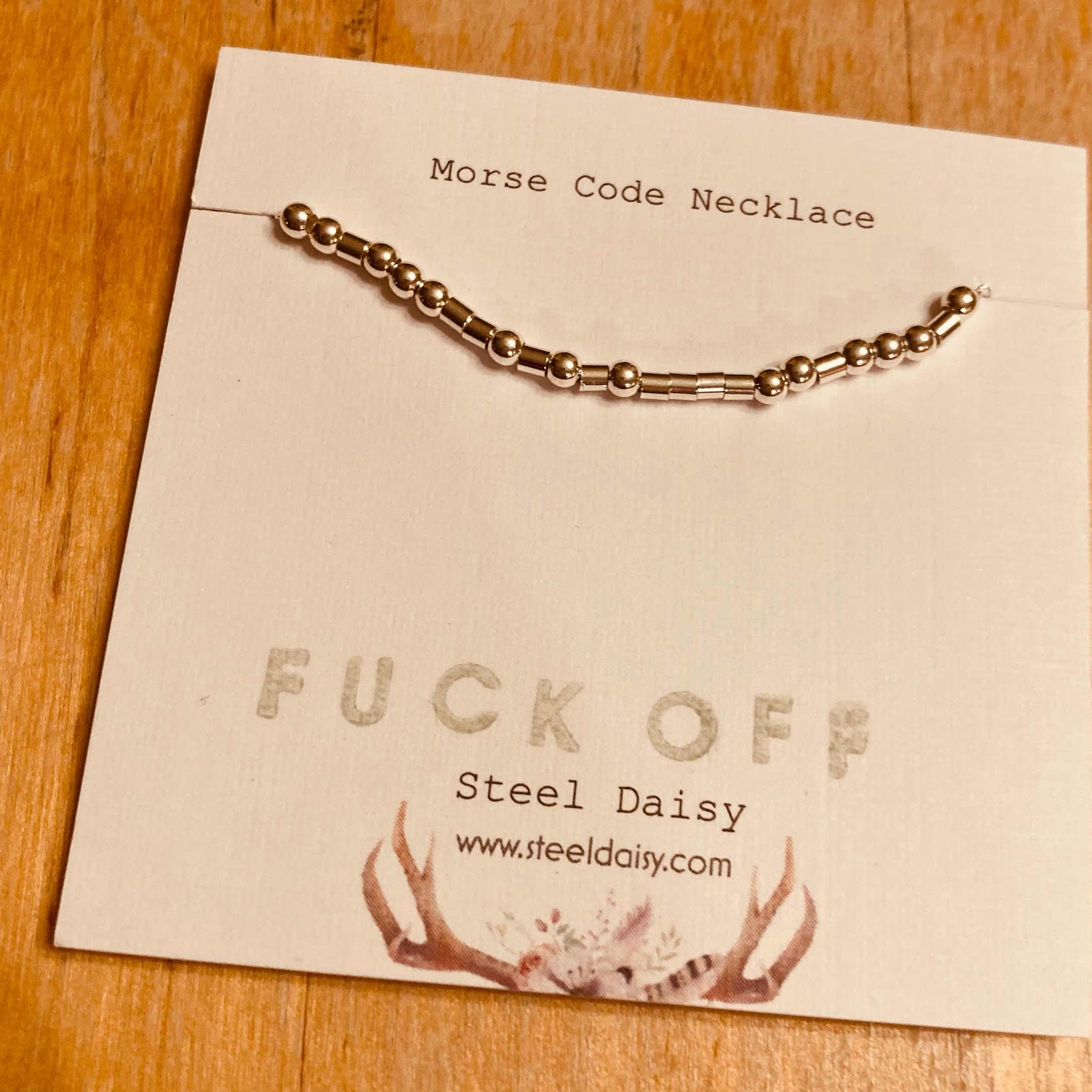 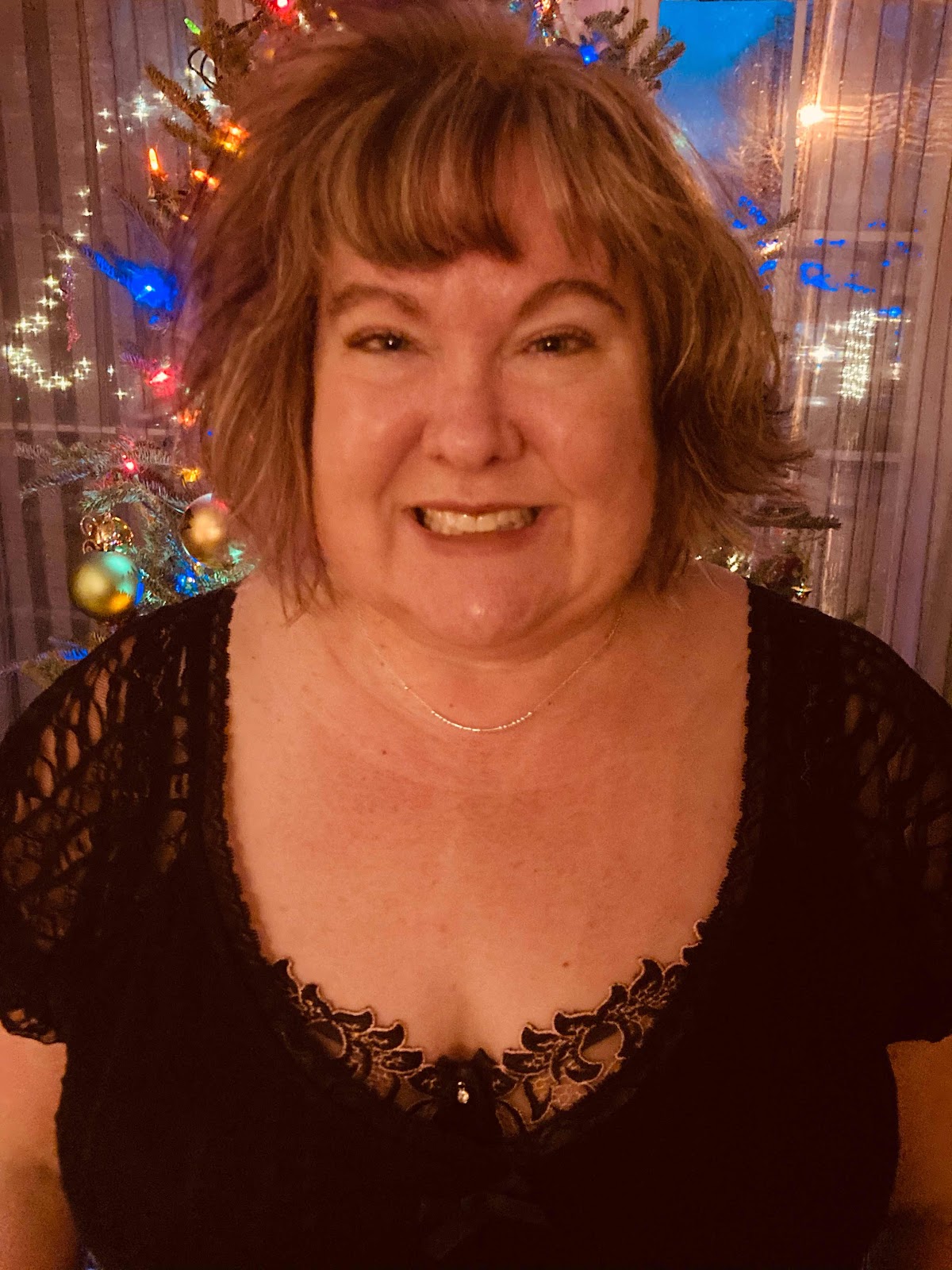 The biggest hits of the things they didn't know they were getting were probably the cold-brew coffee maker for Angus (he drank the rest of Angus's coffee cold every morning when he was home during lockdown), and the photo printer for Eve - she and her five friends are making their own yearbook).

Lucy made it her mission to sniff and lick every single present before it was opened. She opened her own present and was visibly excited by the new toy (the video is ADORABLE but apparently too big to upload, goddammit) which made Eve exclaim in exasperation that capitalism and the Thrill of the New SHOULDN'T WORK ON DOGS. She eventually wore herself out and crawled under Eve's new fuzzy hoodie and used her new socks for a pillow. 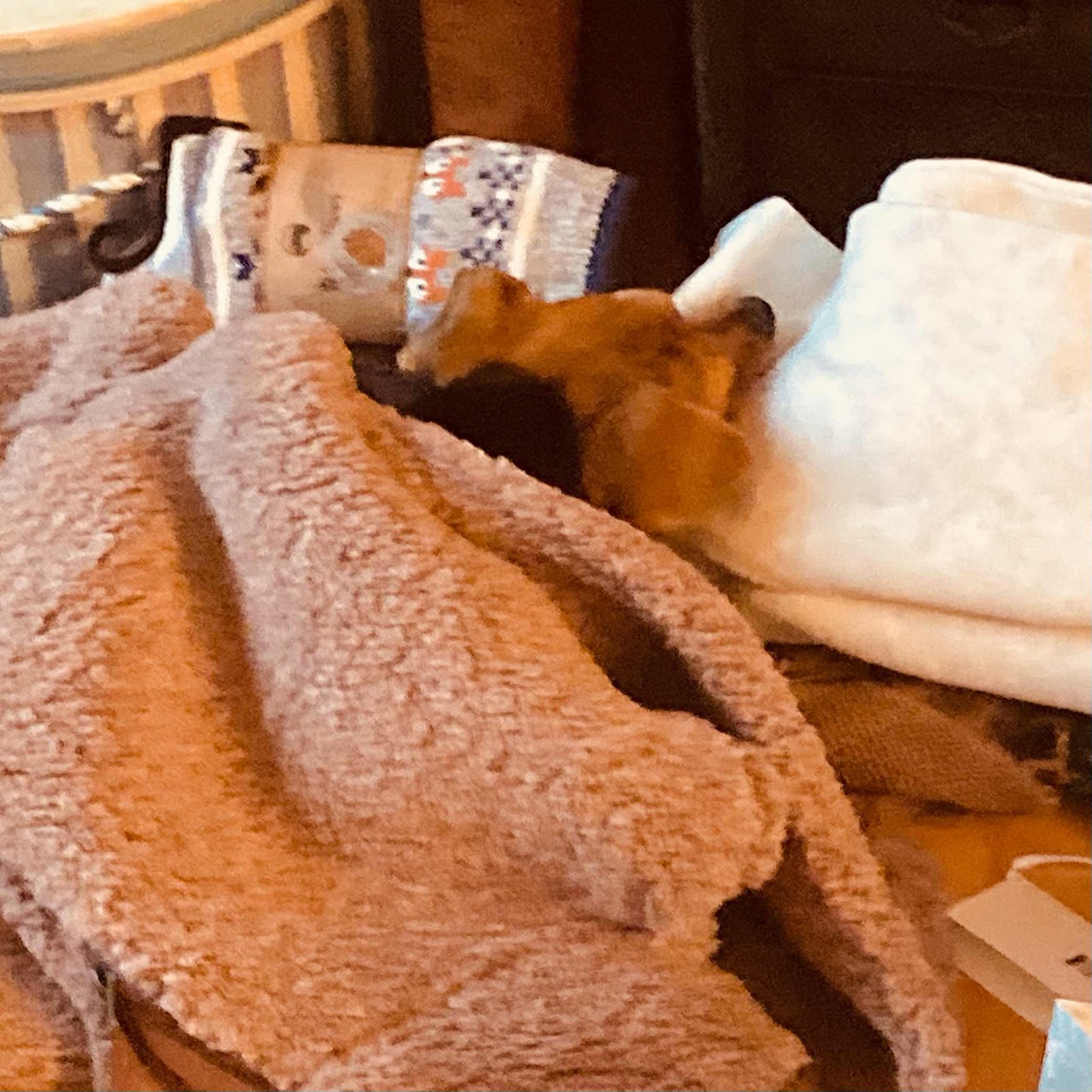 My parents came back in the afternoon and we had a really nice dinner - we did the turkey and they did the sides. We did Christmas crackers and Eve was thrilled with her tiny deck of cards and made Angus play Go Fish with her. 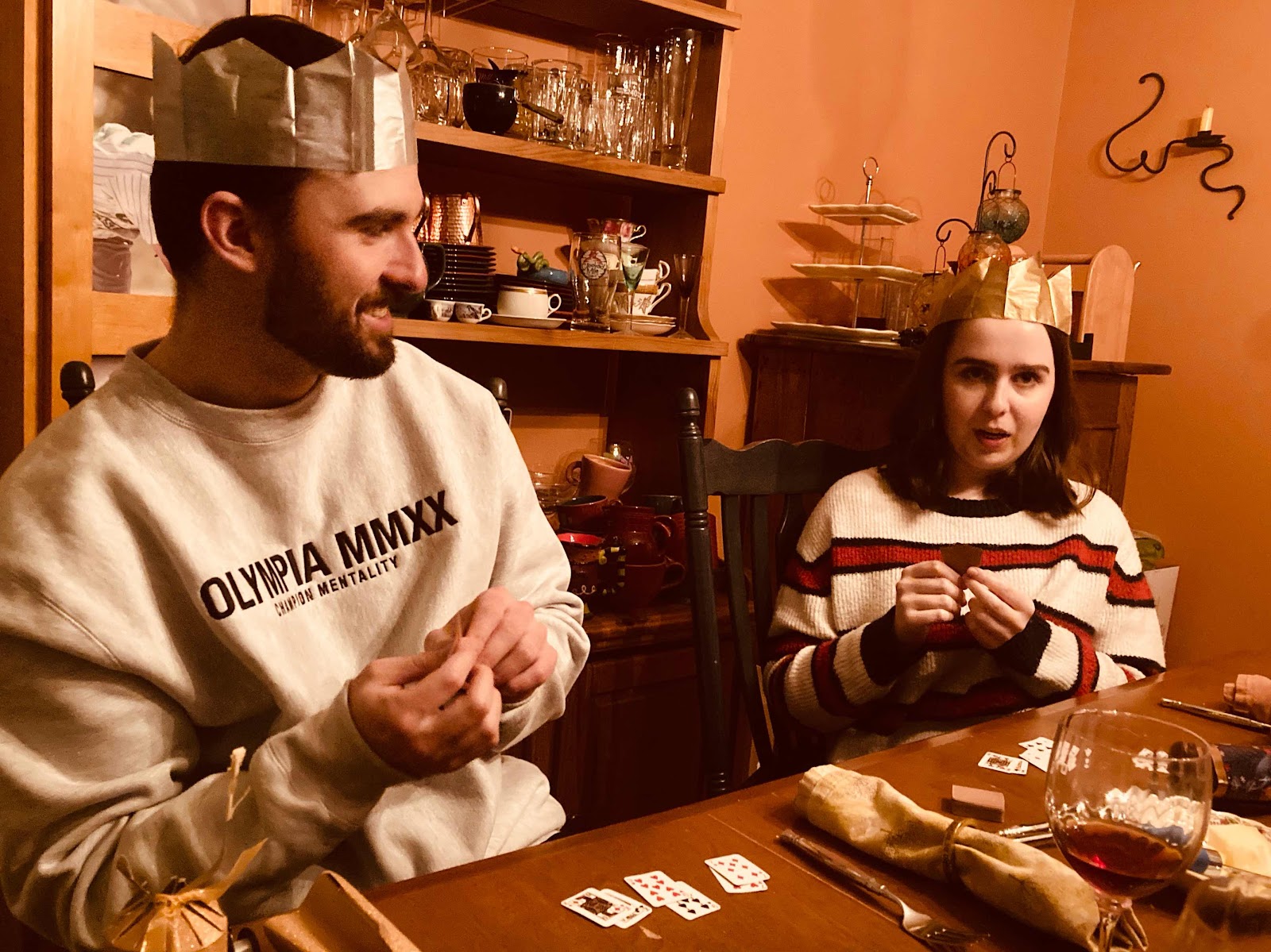 My parents are awesome. 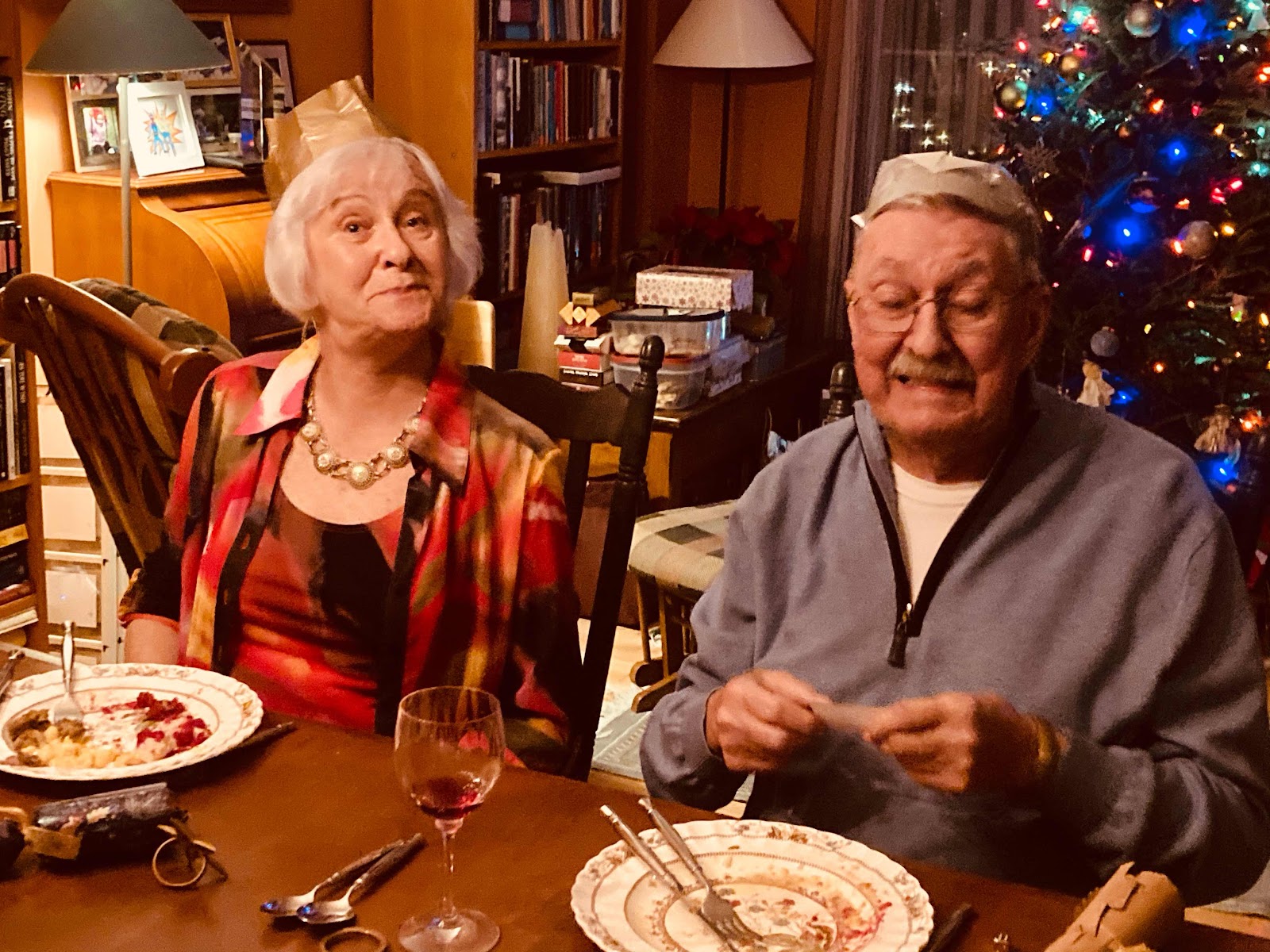 After dinner Eve insisted we play her new game Poetry for Neanderthals - you have to get your team to guess a word but your hints can only be words of one syllable. If you use more than one syllable you get beaten with an inflatable club. It's harder than it sounds - you think you've got the hang of it and then you find yourself saying 'weather' or 'money'. The funniest was probably Matt saying "my day, your day. Hat" and then stopping. We thought he might be having a stroke, but he thought that was sufficient for us to guess "birthday" (me: "um - 'day you were born?' him: 'shut up'). 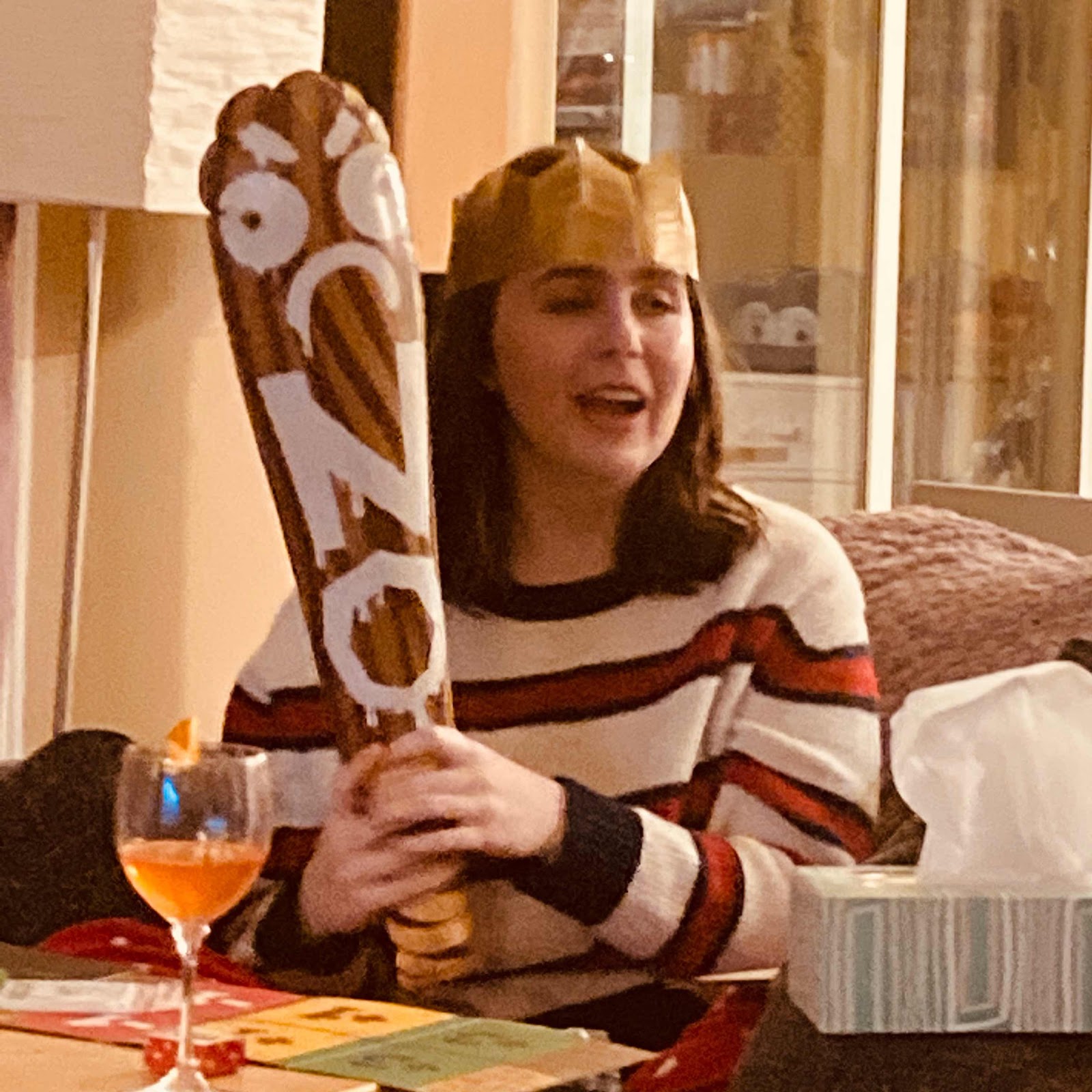 Angus disappeared halfway through the night because I had asked him to wait to shave his beard (and leave the goofy moustache) until after Christmas pictures. 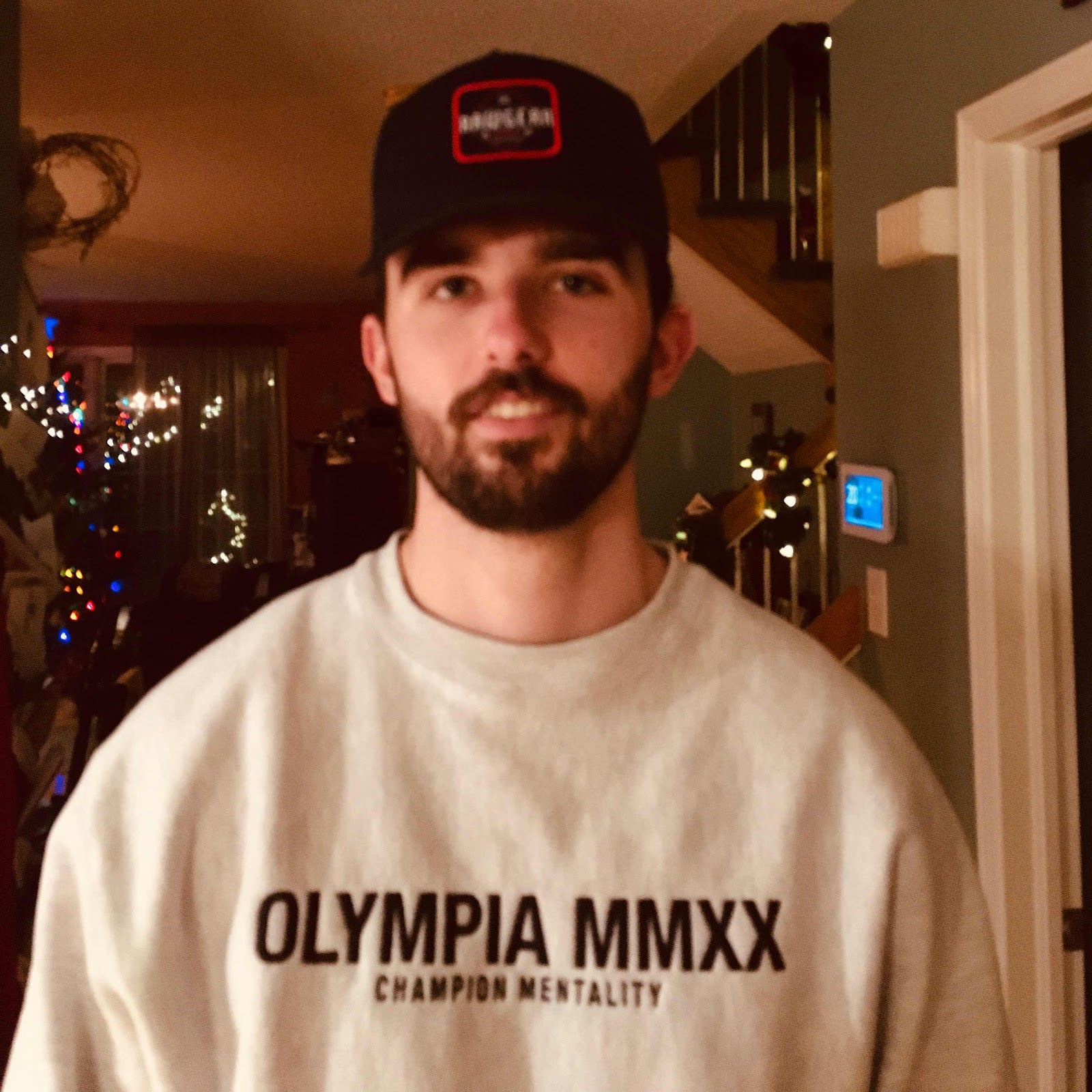 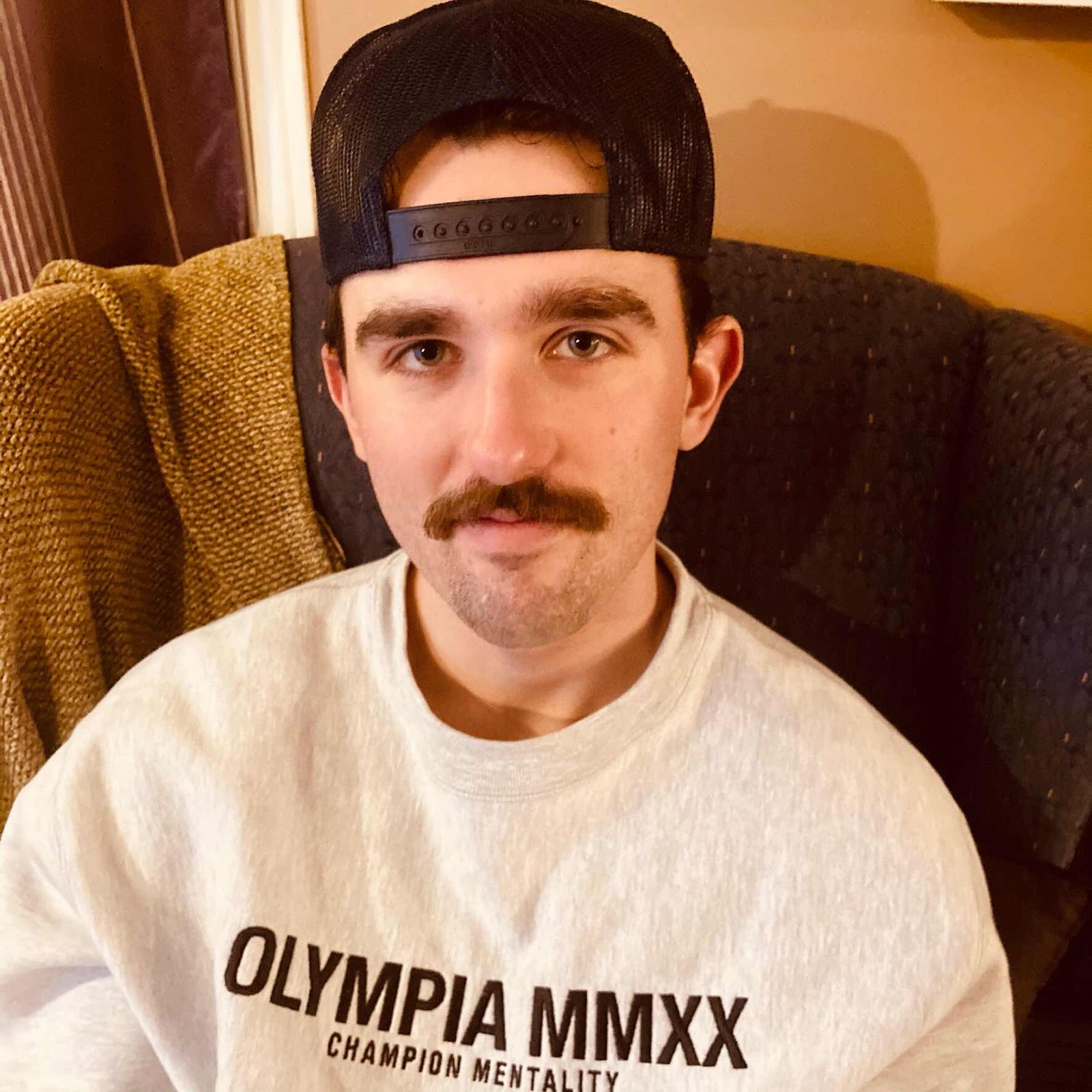 We had a poinsettia and a bottle of Oyster Bay chardonnay (that my mom and Matt drank Christmas Eve) and Nanaimo bars for remembering Nana Barb. We used Nana's Cowslip Spode china for Christmas dinner. Eve drew a poinsettia picture for Matt (Nana Barb used to fill the house with them). She drew me a picture over the music for Everything Changes from Waitress, which was the last musical we saw (and adored) before lockdown, and led to this text from her the week after: 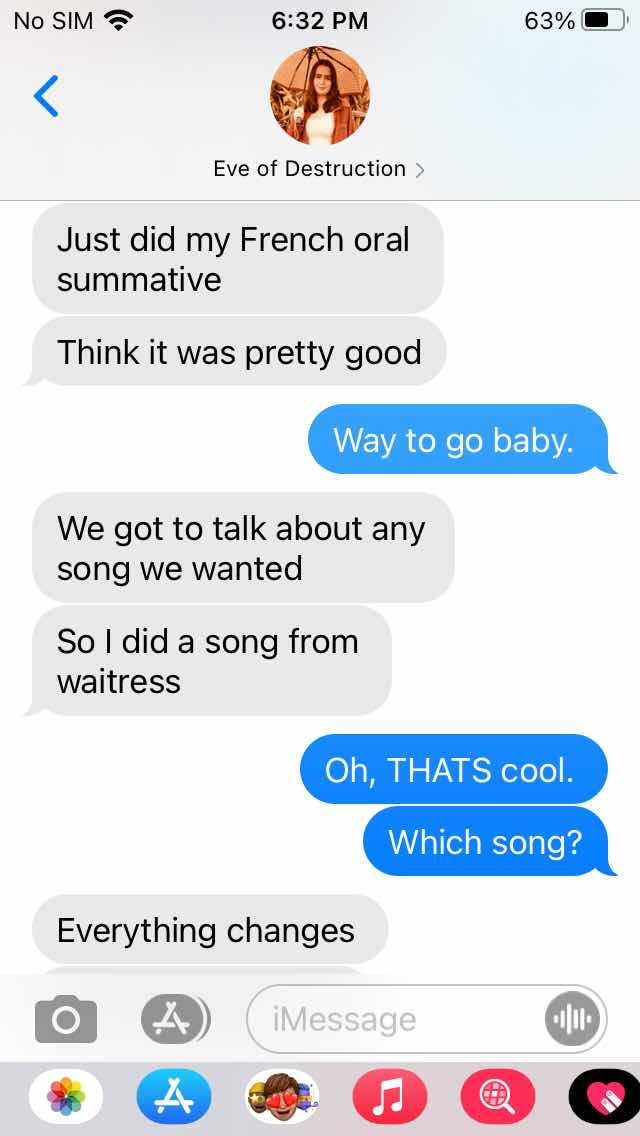 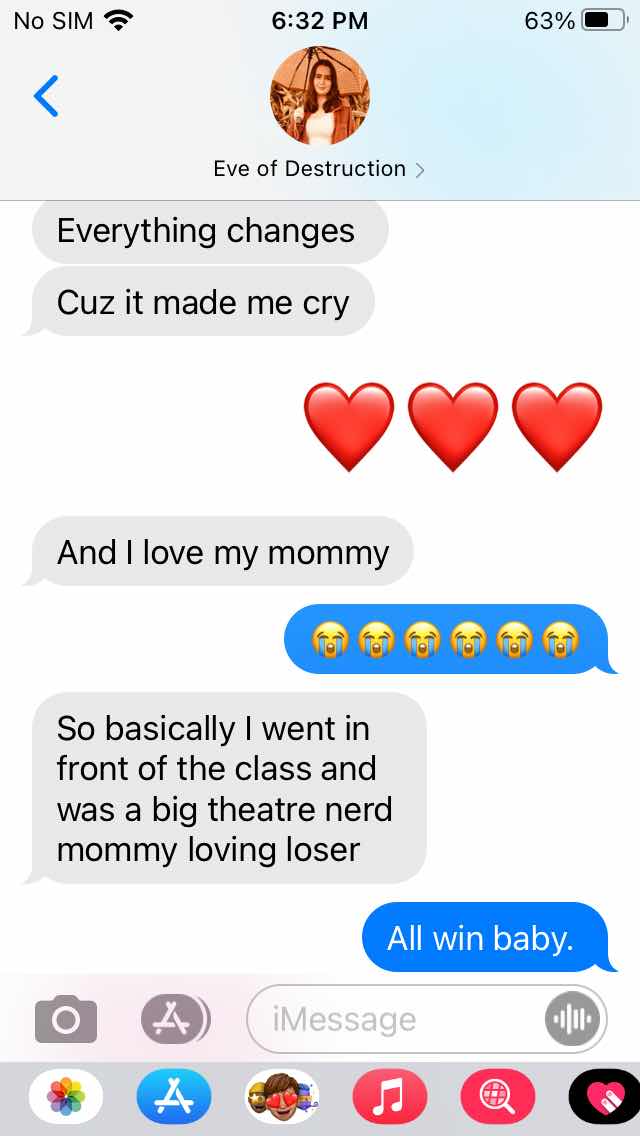 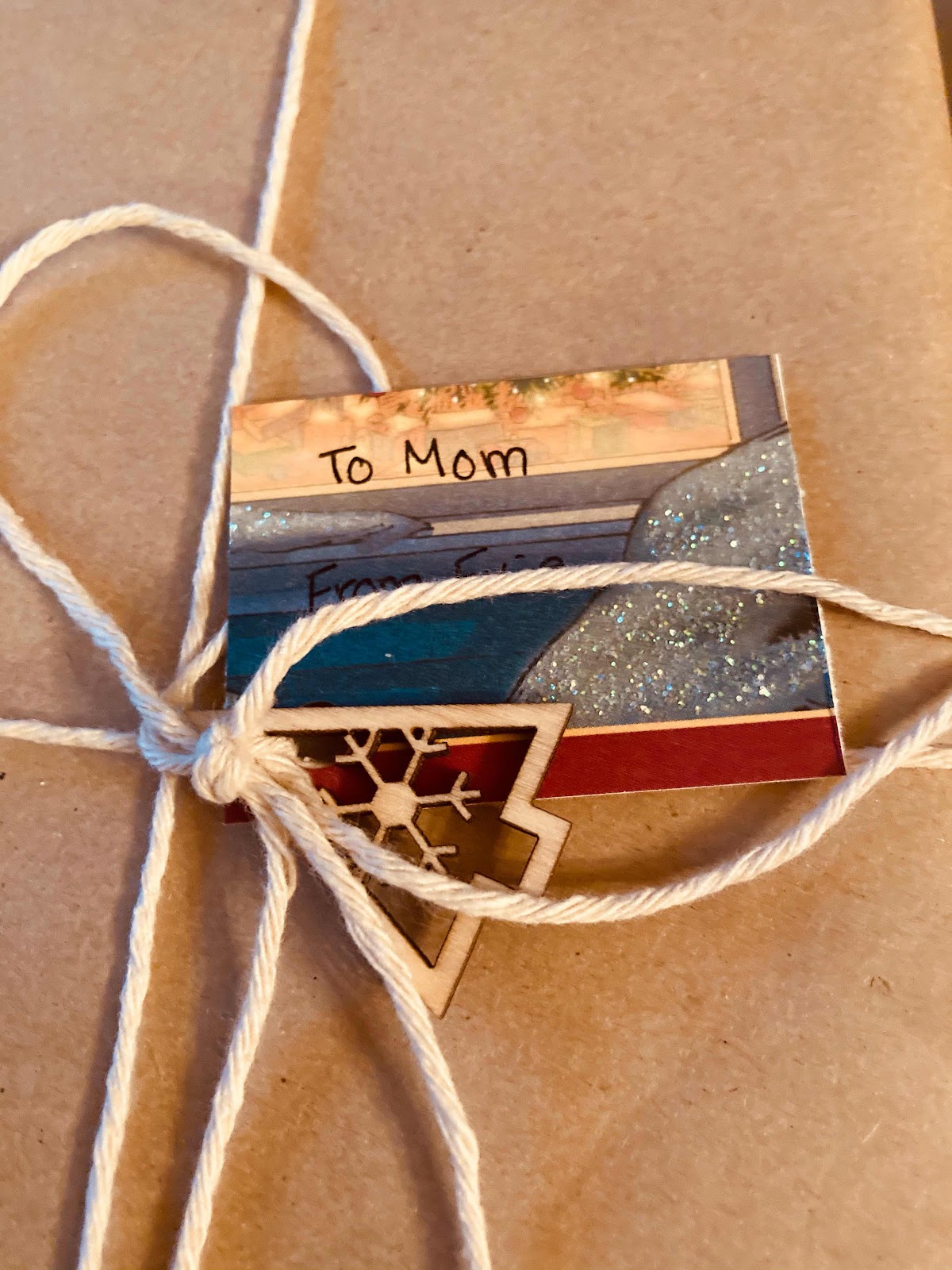 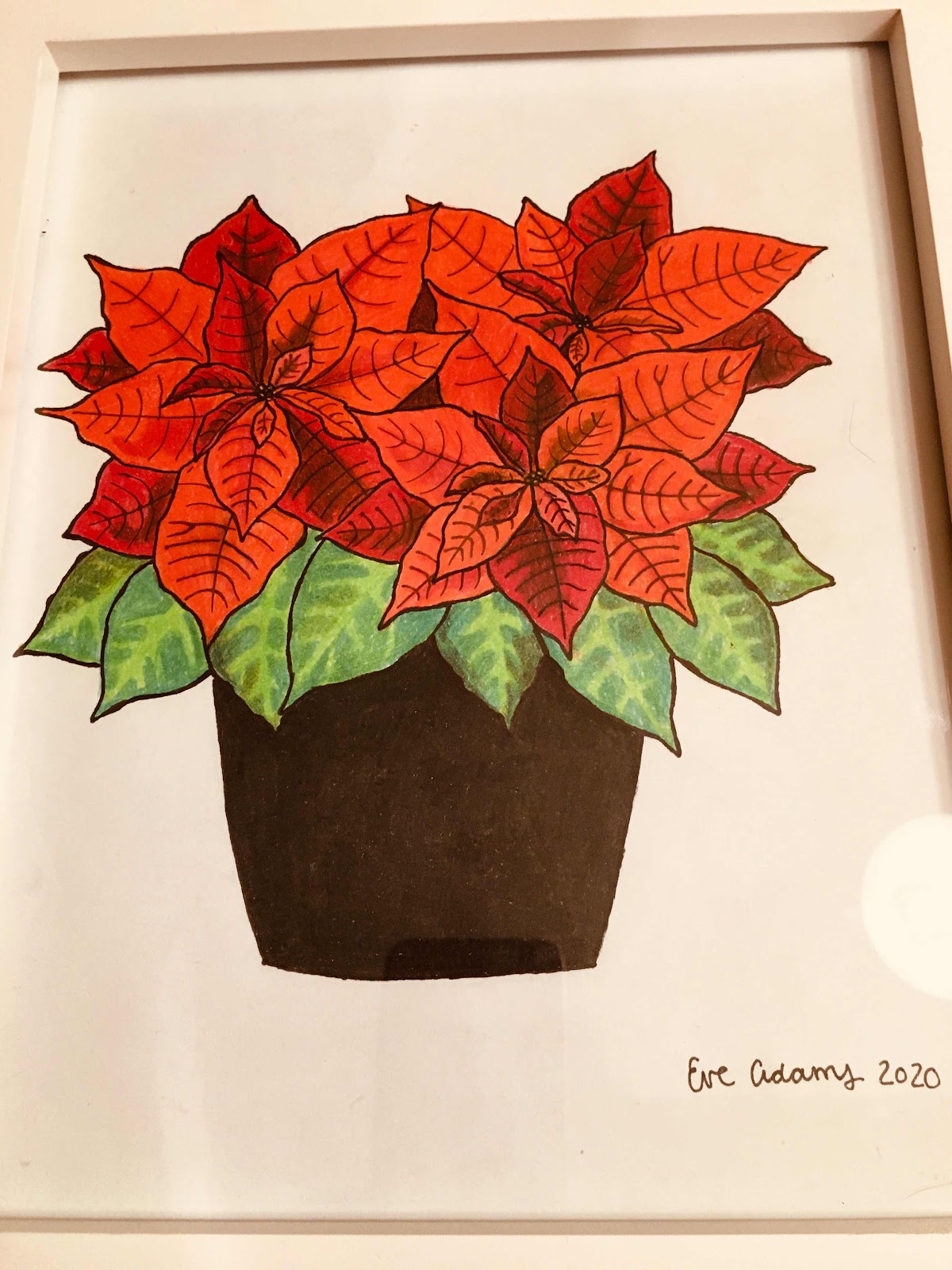 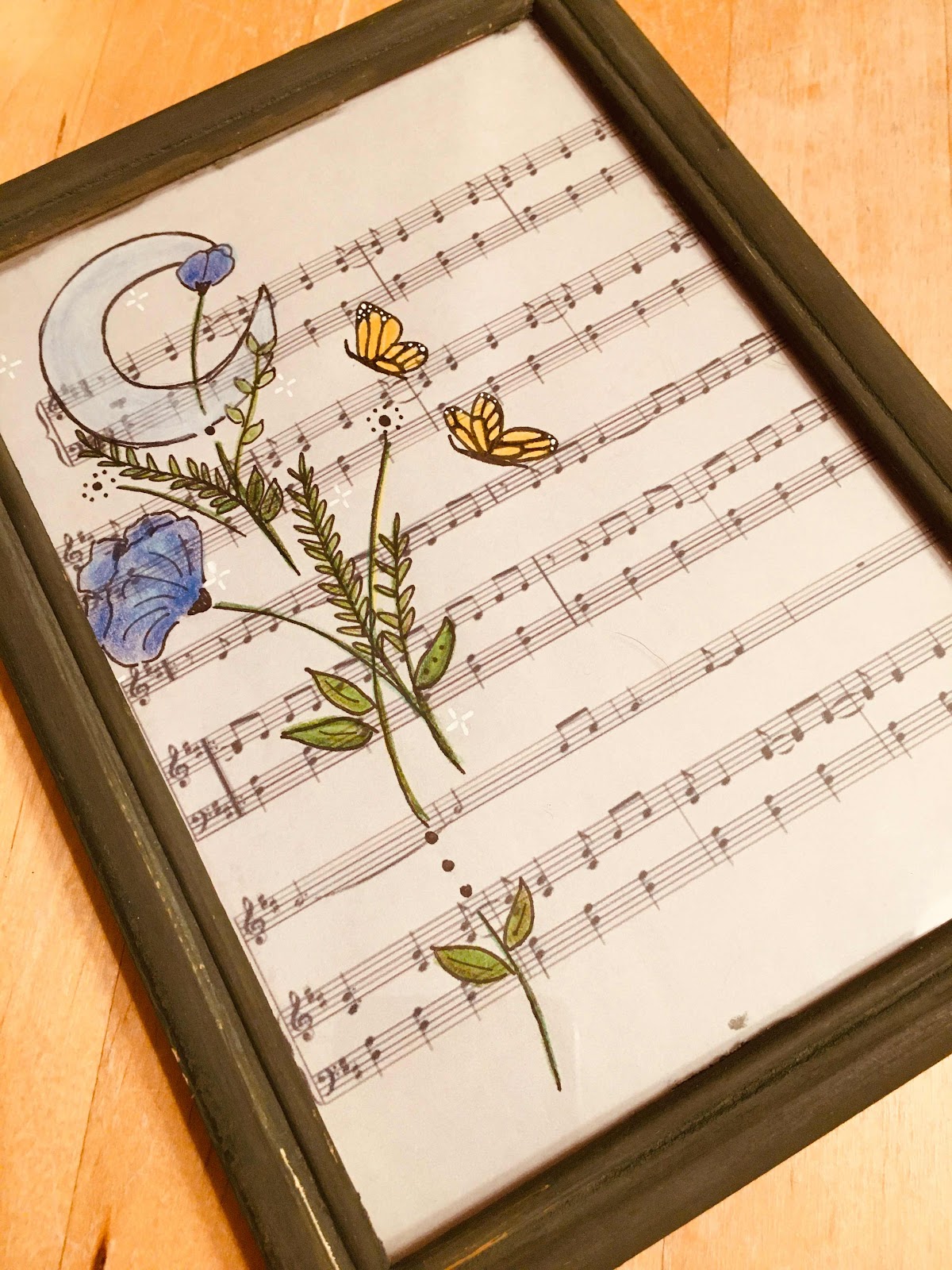 So we still got to have family and laughing and eating and drinking and remembering. Then everyone went home and we kissed our kids goodnight and watched Her, which wasn't Christmassy but was really lovely and sad, which seemed appropriate. 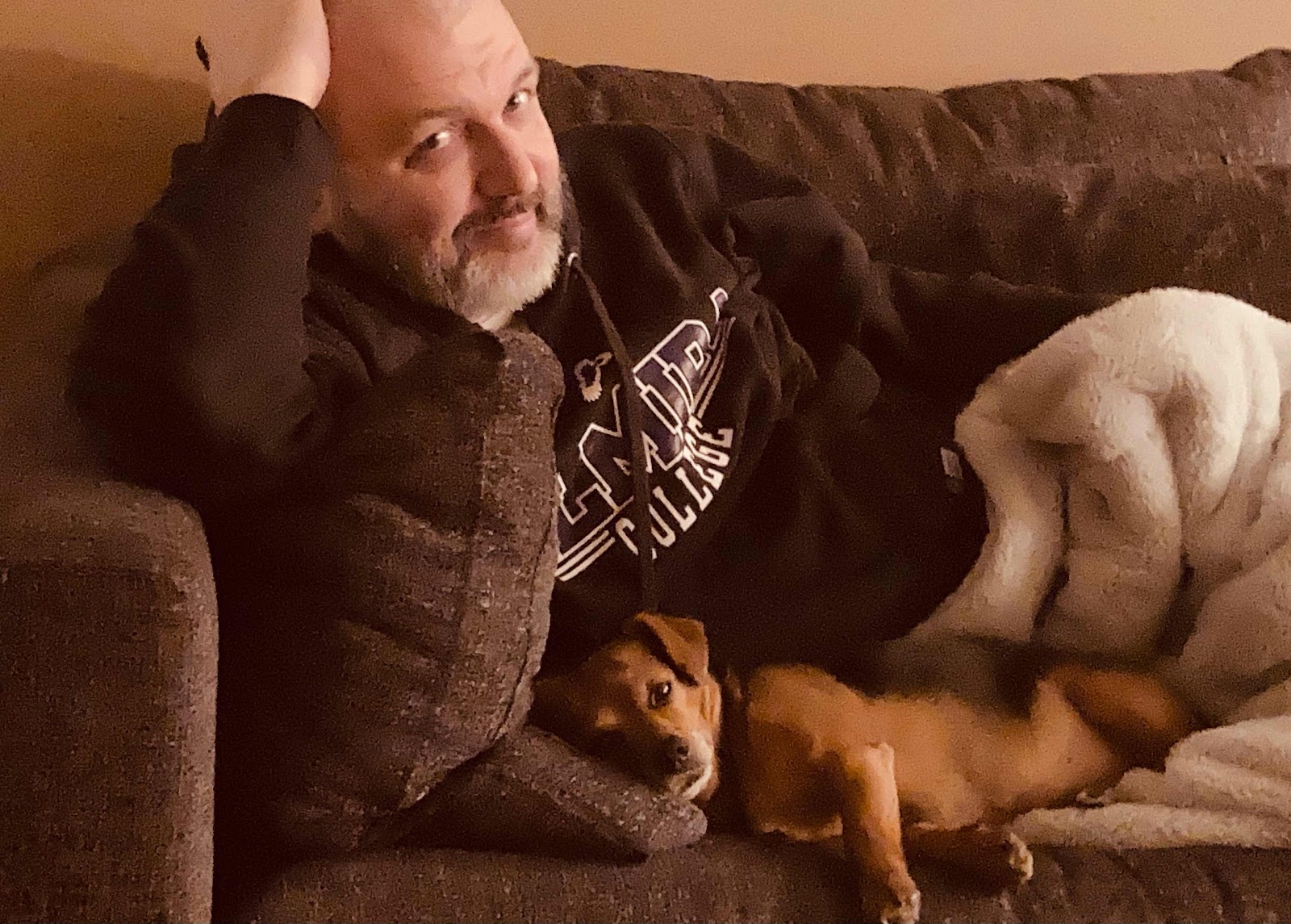 And now the province is in lockdown for 28 days, so settling in for a long winter's nap. Peace and goodwill to everyone.

Nicole MacPherson said…
I love everything about this. I'm so glad you got to visit with your parents. All the gifts sound lovely - I forgot about those chocolate booze bottles! - and this was just such a cozy hug of a festive post. xoxo
December 29, 2020 at 5:27 AM

Ernie said…
Your Christmas sounds so wonderful despite the pandemic. I love your over-buying-for-your-kids thought process. I tell my kids every year that they aren't getting much. But then . . . I end up purchasing more than initially planned. I think I did a bit better this year - having just scaled down the closets, I didn't want to add to it. Those games sound like a hoot. I'm not good at picking out games- I need to take notes. Tank would be all about that t-shirt. I'm blown away by Eve's artwork. Wow. The girls got really nice markers and I wonder if that's what she uses. Thanks for sharing. Glad you had such a good time.
December 29, 2020 at 8:45 AM