HA ha,  no, of course it isn't, I never promised not to lie to you, Radical Honesty is bunk, lies are the WD-40 that grease the machinery of human interaction. Among other things, my blog interface suddenly looks totally different. Do I LOOK like I need a fun new challenge right now, Blogger? DO I? Lucy just scratched at the back door and when I opened it she snatched my gardening gloves off the table and ran outside with them, wtf? The whole world is against me.

You know which very important movie I totally forgot about when I made my sort-of list of my sort-of top ten favourite movies? The Nightmare Before Christmas. I'm a fake fan. *hides head in shame*

Angus left. We were all so stressed about whether he'd be able to get over the border that we went next door and got totally trashed with our neighbours. Angus - who, over the course of the summer, has had A beer with us, sometimes two - drank most of a bottle of red wine by himself, among other drinks, and was very funny. At once point he was talking about driving on a U.S. highway and said the phrase "portable homes" many, many times until someone figured out that he meant mobile homes. He came inside to go to bed a half hour before us, and when I came in I went to find his clothes and wash them so he could leave with everything clean. I couldn't find them anywhere. I tried to get him to tell me where he'd put them, but, well, if you've ever tried to quiz a drunk person half an hour after they went to bed, you know how successful that was. This might be a mystery for the ages.

He left the next day an hour or two later than originally intended. Our friends had been trying to reassure him that he was going to pull up to the border and some border guard would be snoozing on a chair having had nothing to do for four months and would be happy as hell to see someone. This, as it turns out, is very nearly what transpired. Not even an hour after he left, we got this text: 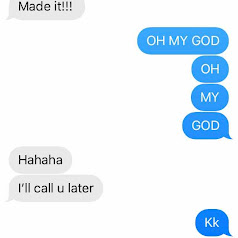 The guard asked him where he was going, what sport he played, then asked him what he wanted to do after college and when Angus said med school the guard said "you should do it in the Caribbean, it's cheap!" Does that not sound like someone who has been starved for conversation? Or maybe owns shares in a Caribbean med school, idk.

After that, Matt and I sat around catatonic for a couple of days due to a severe adrenaline withdrawal. Then my sister and her family came for a few days, which was off-the-charts wonderful. We ate some and drank some, but mostly we just talked and laughed at my parents' house, then at our house, then in our backyard, then in my parents' backyard. Somebody tweeted a Ram Dass quote about how spending a week with our nearest and dearest sometimes causes the realization that they are neither nearest nor dearest, which made me realize how lucky we are that we never run out of things to talk about, that we all generally share the same twisted sense of humour, and that we're never ready for the people who have to leave to leave. Also, we got to hear my niece's story about finishing her first university exam at home and then deciding to have her own little party, which involved a bottle of Kraken, some tunes, a Zoom chat and the phrase "I remember getting into my banana costume". 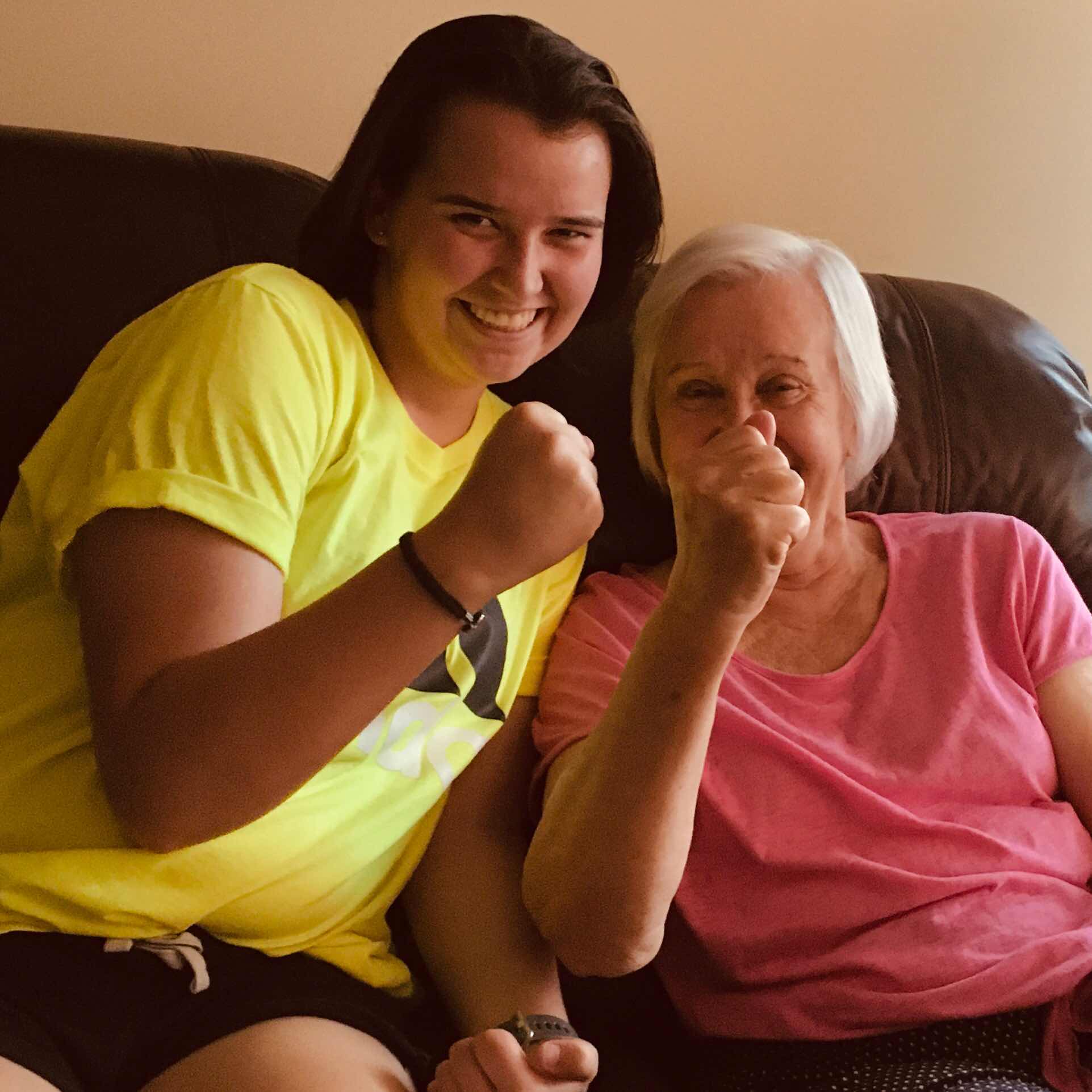 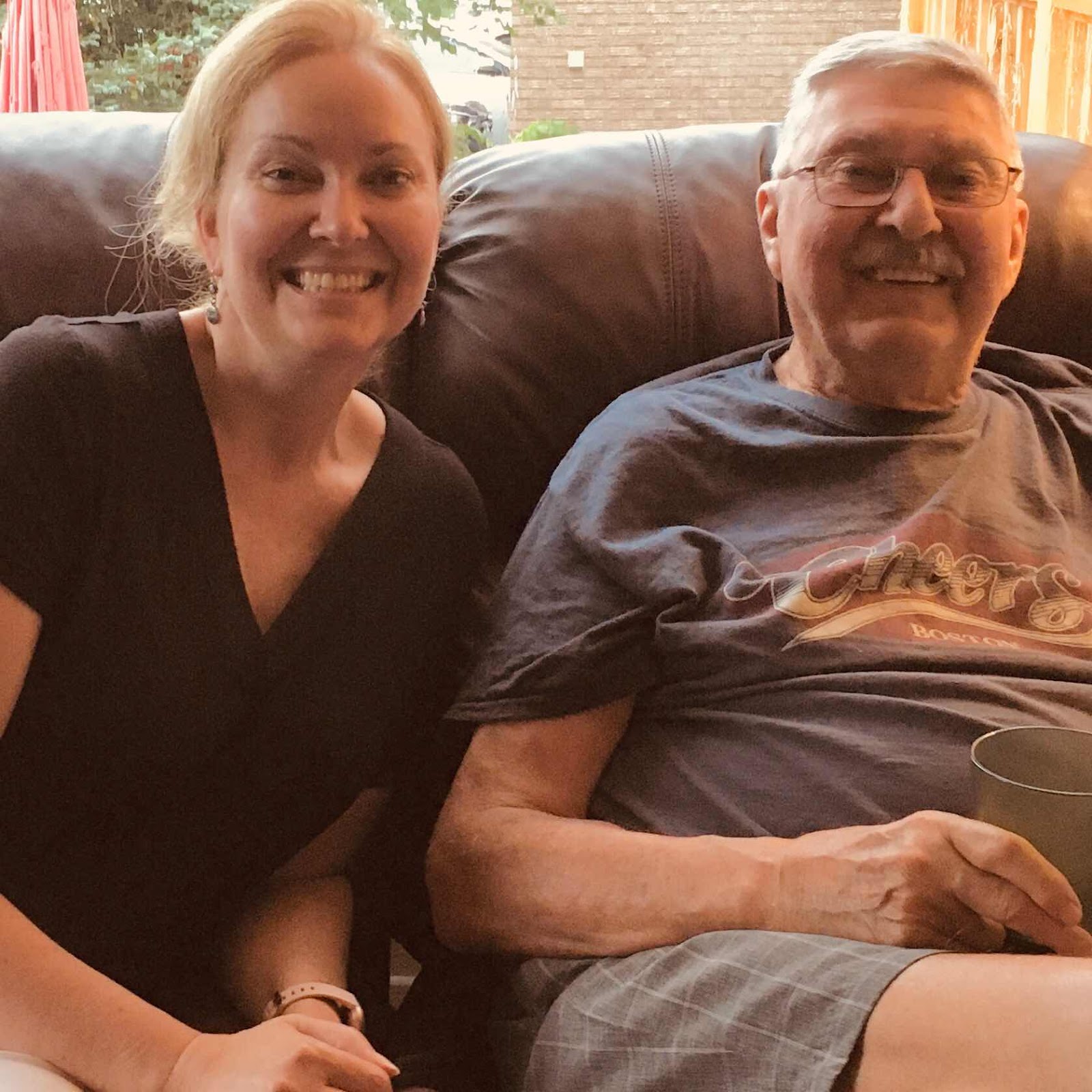 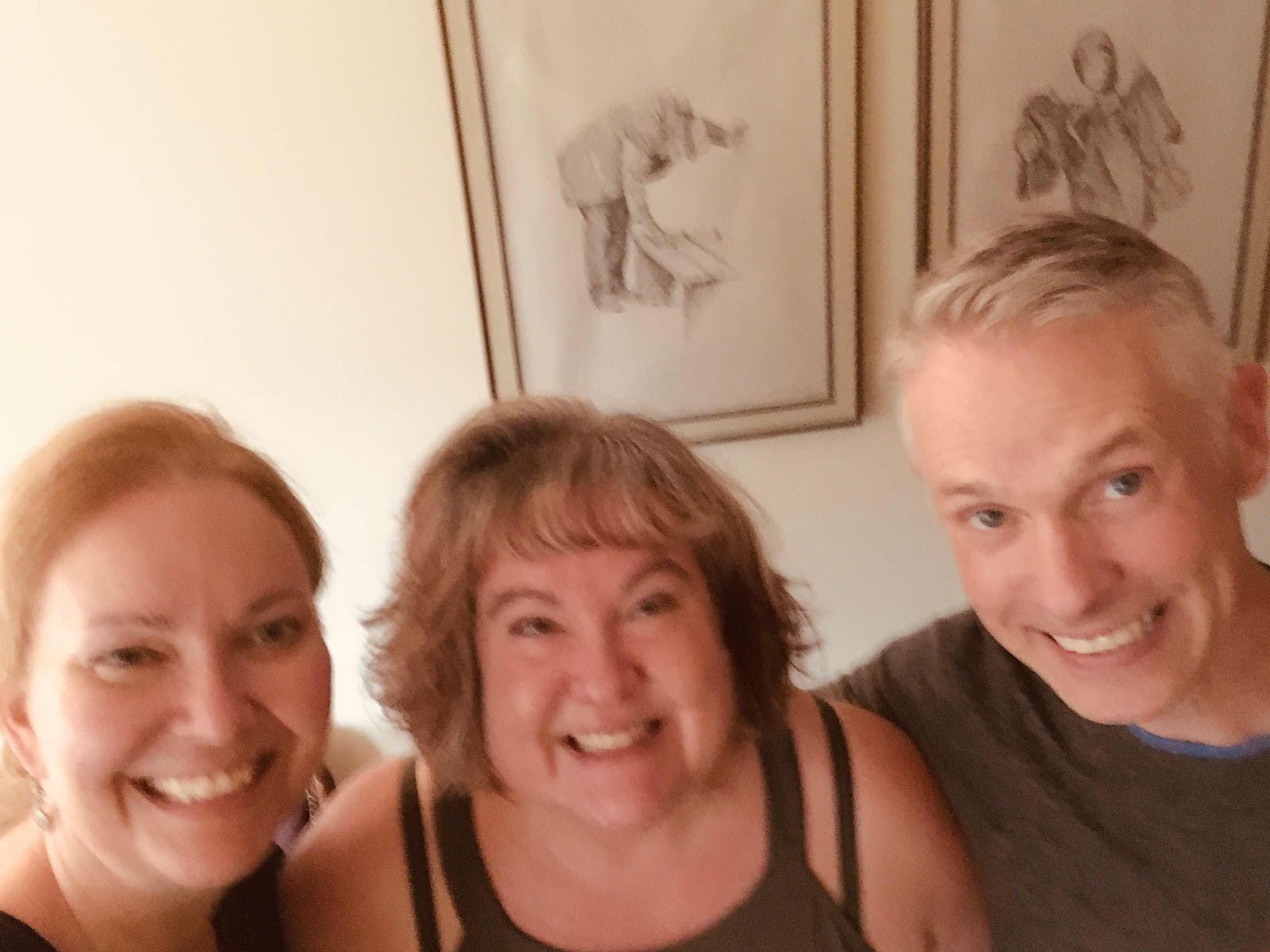 My smartass niece was taking our picture and we told her to hold the camera higher because older people need help not having multiple chins. 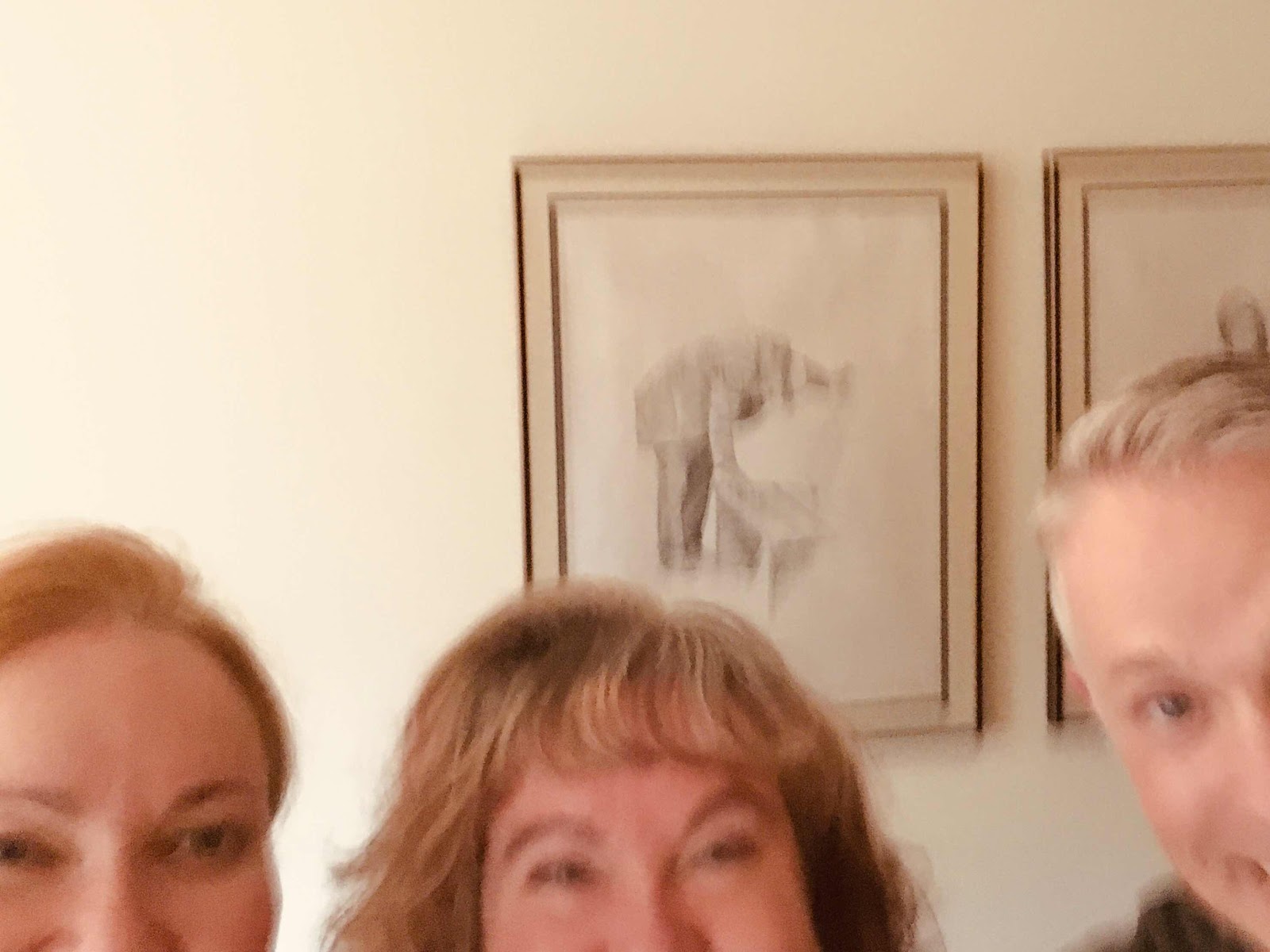 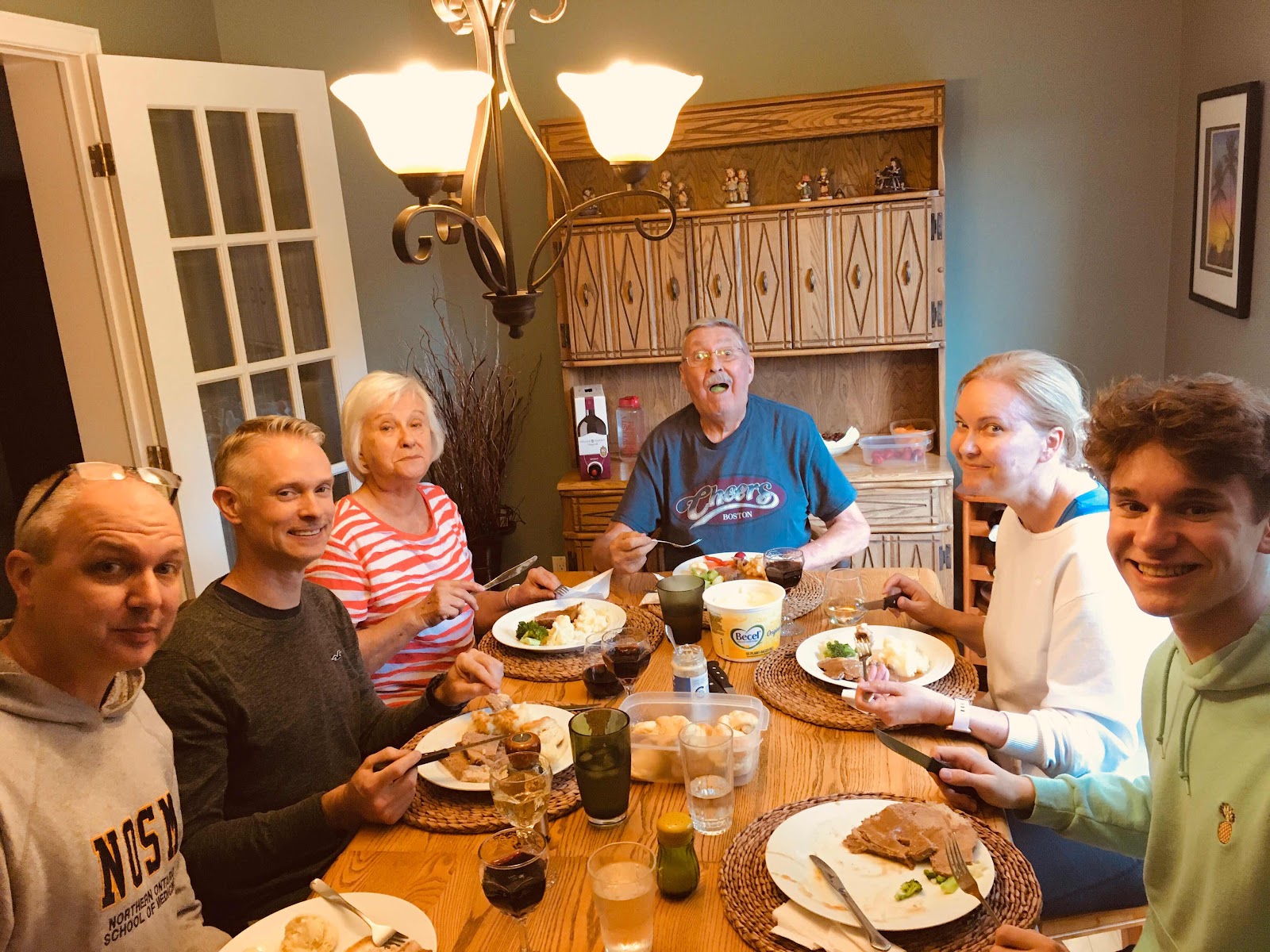 We haven't done a whole ton of "Summer" stuff, because, well, it's hot as fuck and I hate heat. But we do our weekly bar night in one of the two biggest backyards so we can social distance (two words I have grown to hate and may soon spit on the floor every time they are uttered, wait no, that would be irresponsible, I will only spit metaphorically), and this week-end we're going camping, for less time than we usually do because the showers are closed. It will be strange, because Angus won't be there, and Collette won't be there because she basically gets poison ivy if a gentle breeze brushes past the poison ivy and then brushes past her, and camping with no showers is a no-go. We're also not doing the big communal dinners for obvious reasons, and is camping even camping if you're not roasting a giant hunk of meat on a spit over the fire? So this might be a feeble attempt to say Screw You, Covid, but I love the parts of camping I love slightly more than I hate the parts of camping I hate, so marshmallows ahoy.

Nicole MacPherson said…
Have a great time camping! I'm just excited to hear that someone owns a banana costume and I feel like I need more info.
August 13, 2020 at 6:08 AM

StephLove said…
I'm glad Angus got off okay. We're still not sure when/if Noah will be allowed back to IC, as Maryland is on list of restricted states. Have fun camping! (Beth is very susceptible to poison ivy, too, and then once she gets it, she has it forever.)
August 13, 2020 at 6:34 AM

Ernie said…
Oh, before I forget - what the hell with blogger updating stuff? I still can't figure out how to get into my account the way I once did. It just shows a bunch of articles that I have no interest in reading. Who asked for changes? I am technologically challenged which is why I never change anything on my blog and now they have messed with everything while we are at our most vulnerable. I call conspiracy.

Very envious of your neighbors and the fact that you have family members who you enjoy spending time with. Coach and I really enjoy his siblings and have a blast with them. We are doing a time stamped entry grad party at our house on Saturday for our 8th grade/ college grads. Just family and the close friends who would be family if we got to pick. I was all strategic in my planning and my siblings are invited for the first round from 12-3, and Coach's side is invited from 3 and beyond because if all goes well and his siblings stay much later than his folks we will actually enjoy some belly laughs and our faces will hurt from laughing. I will keep you posted on whether or not anyone disrobes and can't remember where they put their clothing.

Busy Bee Suz said…
Your family is a lot like mine; we never run out of things to talk about and laugh about....and we're all smart-asses.
I'm glad you had a nice visit and that Angus is safely back at school.
Laughing at the banana suit....hmmm...:)