For the sword outwears its sheath, and the soul wears out the breast

June 08, 2020
My mother-in-law died, early in the morning on Saturday. Warmest spring on record in Thunder Bay. Her husband had sat through the night with her because he felt that the time was coming. My husband was nearby.


Matt's mom - my kids' Nana Barb - left us this morning and we are bereft. She didn't have a good mother-in-law, so she was determined to be a good mother-in-law and honestly, she probably overshot a little, because I would have settled for one that didn't take her son's side in everything (she didn't, she busted his balls even more than I did). She came and helped me look after the kids while Matt was away - we'd get up early and sit around in our pajamas and messy hair, we'd stay up late and watch weird movies and generally have a splendid time. She bought me my first immersion blender (life-changing) when she couldn't bear to see me pouring soup from pot to blender and back again. She bought me a leopard-print winter hat that I hated, but Eve wore it naked all winter around the house and it gave us great joy. She once mixed me a gin and tonic that made me drunk for three days.
My children are so lucky that they have had full, lifelong relationships with four grandparents and two grandparents. I am so happy that Barb had the adventures she did, that she went places and saw things and had a giant family that she adored. That should be what we all strive for, right? A life that you love so much you can't bear to leave it. A person that we love so much we can't bear to lose them. It's not enough, because it's never enough when we love someone. So I guess I have to be grateful for that, even. Fuck.

This is the obituary, written by my brother-in-law Eric, her middle son of three.
I've typed a lot of things and erased them, here and on social media, out of some misplaced desire not to sound like a cliché. I have not realized that this is asinine - like people who decide that they're going to be "cool" parents, and their kids will wear tiny motorcycle jackets and only listen to Bob Dylan and Velvet Underground, and the whole family ends up embarrassing and douchey.
We found out about a year ago that Barb had lung cancer and that it was probably terminal. This gave us some time to plan visits and tell her we loved her. Matt took Eve up for her birthday in November. I texted her pictures of the kids and the dog almost daily. The disease and treatment turned her into a night owl, so she would be awake on her ipad and we would have conversations at one a.m. We made bad cancer jokes. When Angus shaved his beard into mutton-chop whiskers and I sent her the picture and said he looked like he was about to foreclose on the family farm she said "I know! I thought he was going to make me change the will!" She was brave and magnificent.
So in a way, we're grateful that we had this year to treasure our time with her. But if she had dropped dead of a heart attack on Saturday instead of drifting away on palliative sedation, she would have been able to be at our family Thanksgiving last October with all her sons and their wives and children. She wouldn't have been in terrible pain for the last week or in the hospital without her husband because of Covid last month.
We buried her mother two fucking years ago, at 95. Do you see what I'm doing here? Remember when I talked about doing Covid Math? Now I'm doing Death Math, and it's not helpful in the least, but it's almost impossible to stop doing it entirely.
Matt and I went for a week-end at the end of January. She was doing quite well at that point - she was up out of bed, we had dinners at the table, we had a glass of wine at night, we had great conversations. When I was leaving she said "If I don't see you again..." and I said "You'll see me again". I wish I hadn't. I try really hard not to deal in platitudes. The last time we saw Nana she said "no one lives forever, and I don't feel sorry for myself". Matt said "oh, don't talk like that" and I was like "shut up, dude, the woman is ninety-five". This time I really was confident we would see Barb again because we planned to go up once a month until the end. The only reason we couldn't is fucking Covid, so technically it's not my fault that I was wrong, but I still feel like an asshole.
She was fairly circumspect about who she wanted to have knowledge of her situation, which is why I haven't talked about it here before now. But when we were leaving she also said "take care of Matt. Don't let him cry", and, well, fuck that, Barb, there will be weeping and wailing and gnashing of teeth. I might even rend a garment or two. 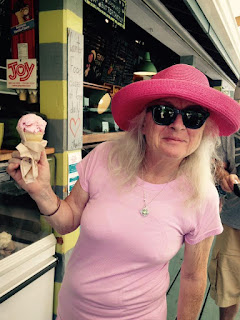 So there it is. Someone we loved died, and we are sad. If you are so inclined, go for a walk and pet all the dogs you can (sometime in the future after Covid, I guess). Raise a gin and tonic - just a tonic if you don't drink, just a gin if that's what floats your boat. Love your people hard. That's all I've got.

Busy Bee Suz said…
Oh my. This got to me. My heart breaks for you and your family. Barb sounds like she was a big personality and a big piece of the puzzle that is our family.
I will toast to her with a glass of wine and I'll let her know I can't do gin.
Big hugs to all of you.
XO
June 8, 2020 at 5:15 PM

The Dewans said…
Oh Sweetie... I am so sorry for your family’s loss... she sounds like an amazing woman and you will all carry a piece of her in your hearts and minds as your memories are strong and full of love. By deepest condolences.... 😢 ❤️
June 8, 2020 at 7:25 PM

Anonymous said…
So sad for all of you, especially now f’n Covid makes everything worse. Thinking of all you now. Hugs from me and Kevin and Rose.
June 8, 2020 at 8:38 PM

Ernie said…
Oh, I am so very sorry for your loss, and by the sound of it this is a big loss. She sounds amazing and wonderful and I can only imagine how much she will be missed.

I love that she overshot in the mother in law dept. That is my goal someday and I hope I get it as right asshe clearly did.

Now I see that you AND your people are gifted with a great sense of humor- even in heavy times.

Nicole MacPherson said…
She sounds like she was such an incredible woman. What a loss to your family, but what a blessing to have had her. xoxoxo
June 9, 2020 at 4:28 AM

Tudor said…
I'm really, hugely, sorry for you and your family. But also really, hugely happy that you have real, and genuine, and vivid memories.
June 9, 2020 at 5:29 AM

The only thing that was remotely comforting when my Dad died was that his wife and two friends were with him. I'm glad she wasn't alone. So many people are dying alone these days.
June 9, 2020 at 6:01 AM

Sue Tolusso said…
Goodness, I am so sorry for your loss, Alli. She looks like she had all the best priorities in her heart: husband, children, grandchildren, family, G&Ts (and dogs). What a wonderful lady. Of course you are all sad. But it's no small feat that she saw her grandchildren grow up and they, like you, will remember her much, much better this way. Fucking cancer. Brave Barb.
June 9, 2020 at 10:07 PM

Lynn said…
So sorry to hear the news - it's so obvious how much she was loved by her family far and wide. I'm so moved to read all about her - hers was a life worth living and she's an inspiration.
June 16, 2020 at 6:45 AM