Hell is Other People

October 31, 2019
Apparently the scariest thing this year is the rainfall warning. Montreal actually postponed Halloween until Friday. Postponed. Halloween. A couple of people floated that in Ottawa, and while I thought it was not the best idea, I found the vitriol of the responses a little depressing.

I have trick or treated, and accompanied my kids trick-or-treating, in pretty much all weather. I grew up in Northern Ontario where costumed were always made big enough to go over a snowsuit. Sometimes it rains. Occasionally it's been crazy warm and we could walk around in costumes with no jackets. Once in Ottawa Eve and I went to a party in Greek goddess costumes and had to clean snow off the car when we got home.

And honestly, I think pouring rain is the worst. I feel bad for the kids and parents trudging around out there tonight. I was putting candy in one kid's pillow case and it was soaking wet and felt very unpleasant. I don't think postponing it would fix everything since it's supposed to rain and/or snow tomorrow too and something would just be lost in doing it a day late, but I'm not going to take some poor mom's head off just for suggesting it.

My husband has been travelling an even crazier amount the past few months, and Eve is in grade eleven with a bunch of science courses, so our time for Halloween decorating was minimal. I have carpal tunnel and weak hands and Eve is the good pumpkin designer and had three unit tests this week, but I managed to hollow one giant-ass pumpkin out last night and she carved it tonight just in time to plunk outside minutes in advance of the first trick-or-treater.

We did to go a Halloween party on Saturday. I was a sexy devil:


Just kidding, I was a devilled egg. 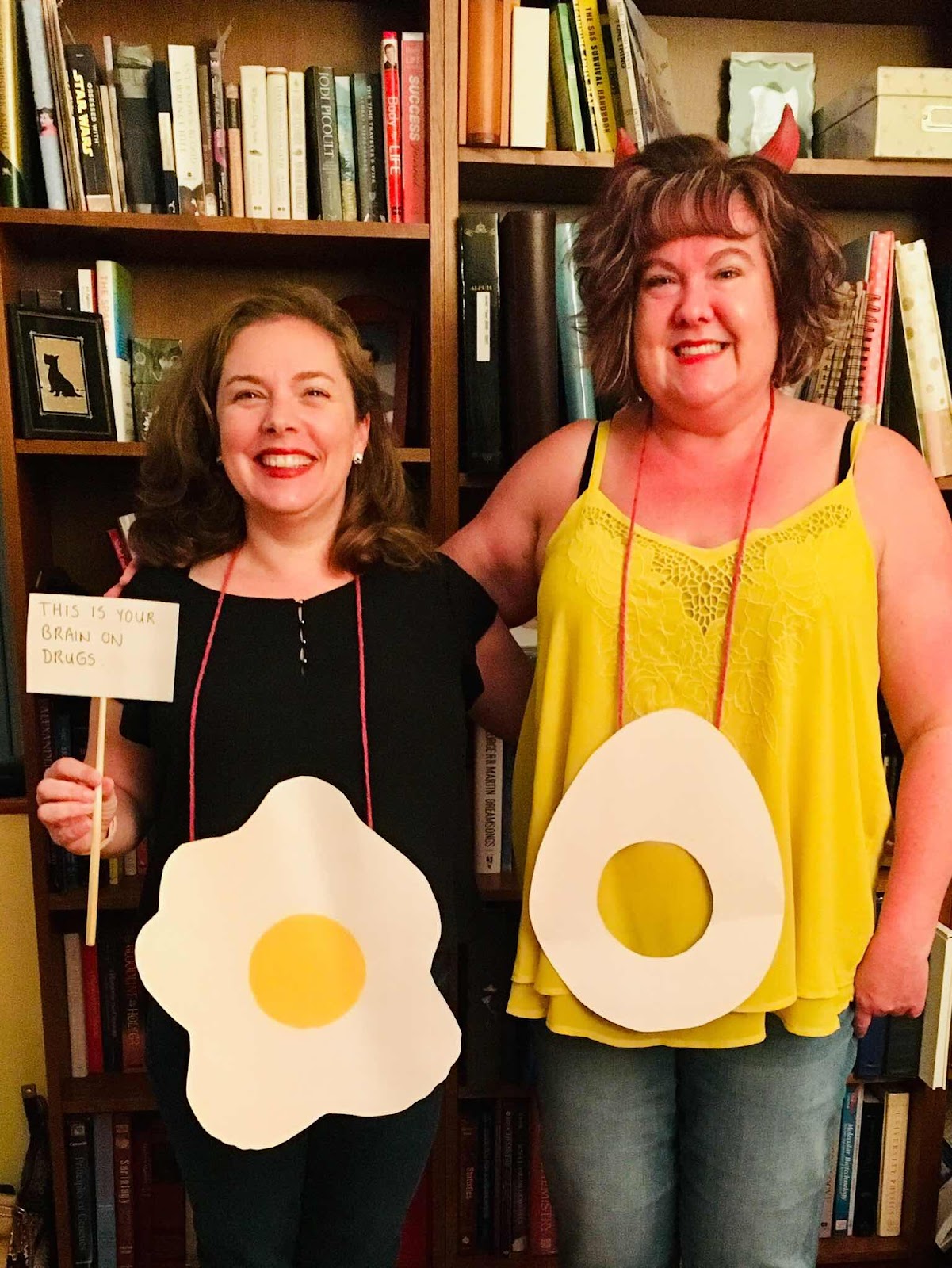 Suzie was a "this is your brain on drugs" ad, for those of a certain age who remember that. She's even more of an introvert than I am, so I entice her to come to the party by making us couples costumes. 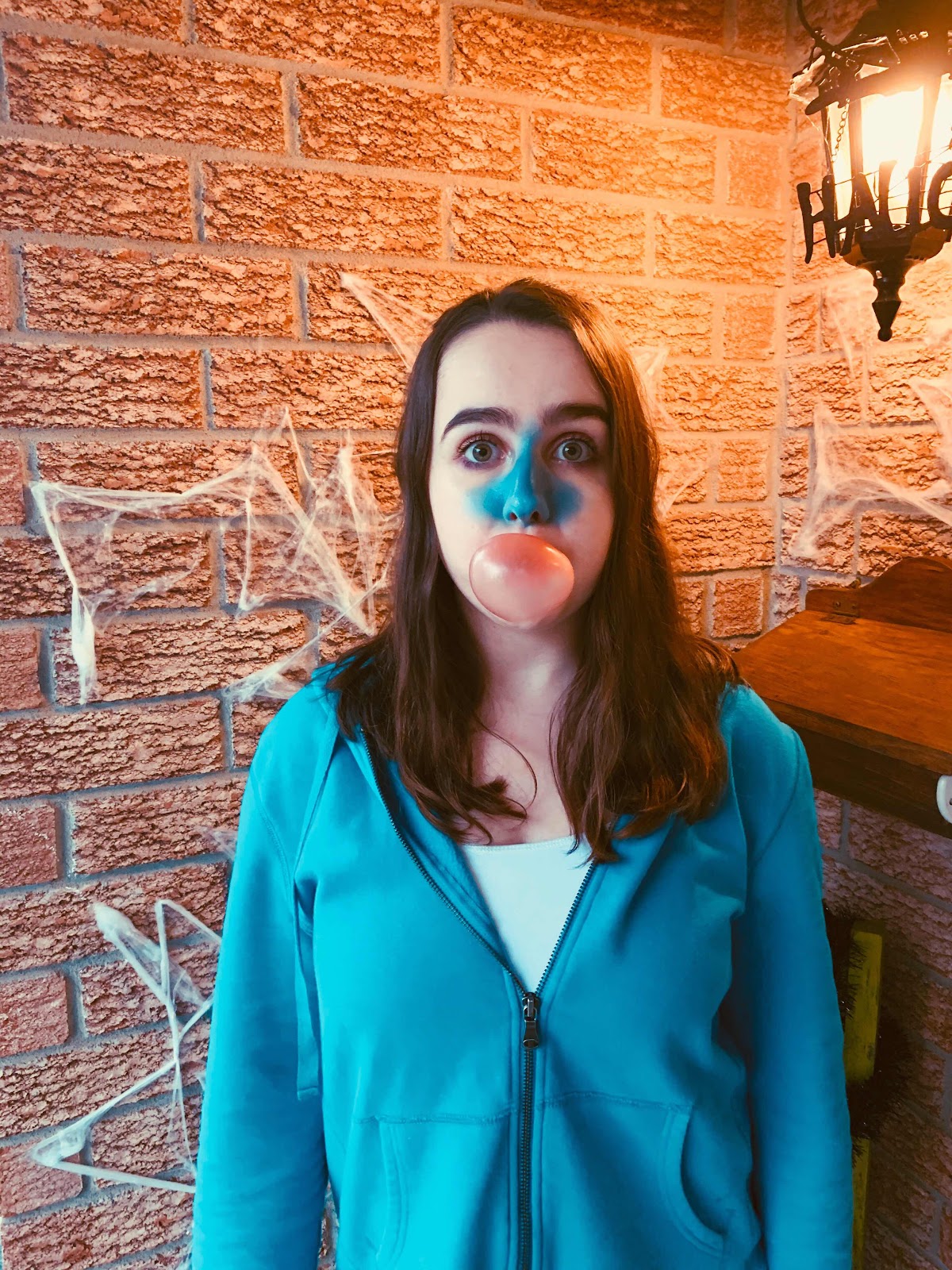 Eve was Violet Beauregard from Charlie and the Chocolate Factory.

I feel like the real highlight of the Halloween season was our Epic Pumpkin Patch Photo-Shoot:

These kids have never seen a Sears Catalogue, but I feel like they've nailed it pretty well anyway.


It's really sad how I don't have kids that want to get pumpkins and paint them anymore.

Nicole MacPherson said…
I was talking about that with a friend yesterday - it would be very strange to just move the holiday. However, pouring rain would be awful. That never happens here. Snow, wind, cold, and occasionally decent weather, but it never rains this time of year. I think that would be gross. As it was it was 1 degree but no snow and not much wind so yay? We got 27 ToTs so I consider that a huge win.
November 1, 2019 at 6:08 AM

StephLove said…
I want to think the kid on the left is the Scarlet Letter, but it looks like he has something on his nose, and I can't make sense of that, so maybe it's something else.

It rained here, too, but it didn't start until after ToTing was over, luckily. Everyone came earlier than usual just in case.
November 1, 2019 at 6:35 AM