October 22, 2017
Every once in a while there's a glitch in the Ottawa Public Library's ebook system, and a book that should be expired and inaccessible on my ipad just... isn't. It just sticks around until I tap on it to delete and return. It's a happy little gift from the literary gods for which I am always grateful. This time it is a massive tome called New Cthulhu: the Recent Weird, and if it hadn't gone all Overdrive Slipstream I never would have gotten through it on time since it weighs in at around 1100 digital pages. 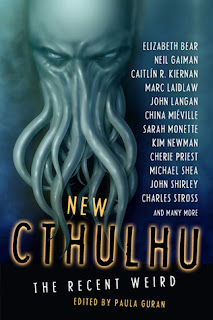 As a fairly devoted horror fan, I'm not great at appreciating actual Lovecraft. Look, I relish tentacle porn and the unjudicious use of the word 'eldritch' as much as the next girl, but it's a little too on-the-nose for me - I just like my horror a tad more subtle. So it's probably not even technically allowed that I love Lovecraft-inspired horror fiction as much as I do. But I do, and most of the stories in this sprawling, wide-ranging collection are delicious, inventive and engaging with sometimes just a whiff of tainted sea air or the merest glimpse of a beslimed sea creature, sometimes more. Also included was Norman Partridge's bleakly superb Lesser Demons, which I had just been thinking about the other day without being able to remember either the title or the author (so much fortuitousness here!). Truthfully, I feel like the editor would have had to squint a little to get that one into a Lovecraft-inspired anthology, but I'm good with it.

I'm a bad rereader, I think I've mentioned that. The TBR pile is ever-growing, and much of the lure of reading for me resides in the pleasure of discovery. That's not a really good or defensible thing, though, not entirely. It's often why I pass over literary fiction in favour or sci fi and fantasy or horror, and the truth is that, for me, moderation and variety works the best in reading as well as in diet.

Wait, that kind of doesn't work for where I'm going next. Sod it, I'll leave it there anyway. After my last tear through a bunch of library holds that came in all at once, I was becalmed once again, with no idea what to read next and nothing really pulling at me. I wanted a sure thing, and as I'm realizing more and more, when you've read a couple thousand books and your memory is worse all the time, there's nothing like a reread for a sure thing - not only do you know already know you loved it, you can't really remember exactly why! Or what precisely happened! Or when!

And that brings us to about the length that my blog barometer tells me I would start getting bored after, so I'll tell you about who I've been furiously rereading tomorrow.

Common Household Mom said…
Yes, yes, yes, on rereading and memory! I am thankful that I (mostly) can't remember what happened in a book I read a while ago. But I remember the FEELING it gave me, so I can re-read for the same reading pleasure all over again.

I do find it difficult when those library holds all come in at once. It's like there is some Big Librarian in the Sky laughing at me, saying, "Just try and read THESE all at once!"

Sasha said…
I've had that glitch with my Kobo. Coincided rather interestingly with my changing the device date in the settings :D

Nicole said…
I re-read OFTEN but this year I've taken a page out of your book and have been recording what I've read, so I can look back on it later. So far I haven't re-read anything - but then again I've been taking things out at the library and they all come in at once, so I end up voraciously reading 5-6 books in 3 weeks.
October 23, 2017 at 11:10 AM

StephLove said…
When she moved out West five years ago my mom gave me a box of my old Agatha Christie novels she found while packing. I was kind of obsessed with Christie in my early teens. I started re-reading them (still have a few left) and I found that with only rare exceptions I did not remember whodunit.
October 25, 2017 at 5:30 AM