With Painful Steps and Slow

December 21, 2016
That title is just because I've been obsessed with Sixpence None the Richer's version of It Came Upon a Midnight Clear for the past few Christmas seasons, and it seemed more appropriate to my current state than "With Peaceful Wings Unfurled".

Matt went to California last week because he kind of needed to visit a customer and if he did it now it would give him enough points to maintain his Ludicrous Elite status for next year. I don't begrudge him that at all - traveling is draining, and anything that makes it less suckful is all good with me - but it was kind of a tough week to be alone. There was shoveling and box-moving and decorating and baking to be done, which is fine, but on top of all that I was the sole kid wrangler and driver, and by the end of the week I was wrung out like a dishcloth. Consequently, I feel like I've managed to get everything done for a great family Christmas, but my Christmas cards are now going to be January cards and I haven't done as much for friends and charitable stuff as I meant to and have done in the past. I did some online donations, and I guess I'll have to call that good for this year.

More on cold-weather accessories, because it was so enjoyable last time: the temperature dropped to below minus 30 with the wind chill last week. I actually had to wear a winter coat in the car a couple of times, something I rarely do because no matter how cold I am getting in, I'm always too hot by the time I get where I'm going. I also tried multiple pairs of mittens and gloves, and the only ones that kept my hands warm were the ones I got at a sex store while I was visiting Zarah in Barrie. The store was empty when we went in, and the woman who owned it was so fun that we ended up trying on a bunch of lingerie and walking around the store half-naked completely unself-consciously. Then I noticed this random box of mittens that were wholly incongruous in the setting but incredibly squishy fluffy warm, and dirt cheap, so I bought a pair. Then, while I was waiting for Zarah to finish up and chatting with the store owner at the counter, I picked up a bottle of vanilla something and said oh, what is this? Room spray? And then the store owner doubled over laughing because of course it was lube. Sex lube. At least I didn't try to spray it into the air.

Right now we're continuing our tradition of exposing Eve to horrifically inappropriate Christmas movies - watching The Ref while I bake cookies and she decorates. She did a bunch of really beautiful ones, and then she said "hmm, this one looks a little Satanic. Maybe I'll try adding some of these adorable little gingerbread men sprinkles.... OH NO, now it looks like I murdered the gingerbread men and they're lying in a pool of blood!" 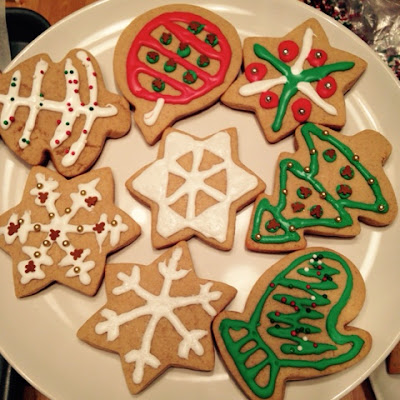 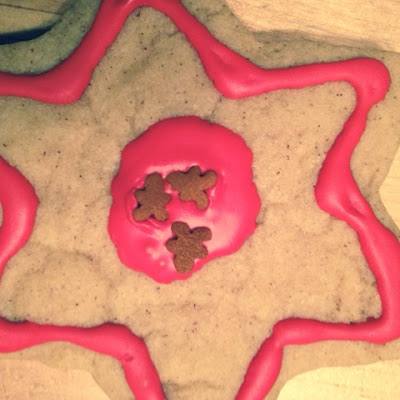 So. You know. Merry Christmas.

StephLove said…
This week has been agonizing. Every day seems twice as long as usual but at the end, there's still a lot undone. And yet I'm going to June's science class's open house today because I missed the first one earlier in the fall.

On a lighter note, when we were teens, my sister and I made a gingerbread French revolution, complete with decapitated gingerbread people with blood made from orange Tic-tacs (because we didn't have anything red on hand).
December 22, 2016 at 6:06 AM

Nicole said…
That is a hard week to be alone. The cookies look great, though, even the gingerbread men drowning in blood :)
December 22, 2016 at 6:55 AM

Common Household Mom said…
Here is my interpretation: The tiny gingerbread men are in a hot tub. A very hot tub.
December 22, 2016 at 10:32 AM

Magpie said…
The Ref is one of my all time favorite christmas movies, though i always feel uncomfortable watching it with my husband...
January 8, 2017 at 5:30 PM