November 07, 2016
I usually like to think that advertising doesn't have that big an effect on me. I like a clever, funny commercial (those ones are in the overwhelming minority), but as often as not I don't actually notice what it's for. I generally base my decisions on what brand to buy based on what seems like good value or what's better quality once we've tried it.

We also have an unwritten rule in our house that when a new chip flavour comes out, we buy a bag and try it. This went horribly wrong once or twice, because if there's a pack of gum or an open bag of chips on the counter, my husband shovels some into his mouth without really looking - I once told him that he could buy his own mints instead of always asking me for one of mine, but then we agreed that if he did that he would down them all at once and die in an agonizing surfeit of mintiness. So when he came across the open bag of Lay's curry chips (they were not good - the curry flavour was very unsubtle) it was very unpleasant. I said "didn't you look at the label first?" After he stopped choking and crying, he said "no, of course not! You know me - hey, free cocaine!"

But every now and then, one slips past my mental firewall. I don't even try to pretend otherwise. 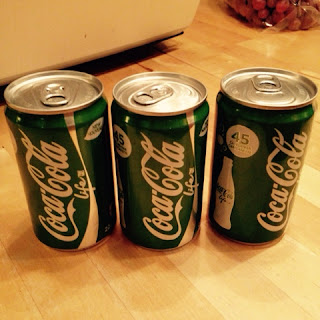 There is literally no good reason for this product to exist.

And yes, I bought six tiny cans. It tastes like slightly sweeter Coke Zero, which I don't even like. I figure Collette and I will mix it with rum while decorating her house at an absurdly early date for the Christmas party.

I am suitably chastened.

Julie Leclair said…
Is that Coke Life?? WTF is that?

We do the same with chips. The beers ones were disgusting. As were the ceasars. And my hubby is pretty much the same with an open bag of chips. totally free cocaine.
November 8, 2016 at 5:21 AM

Hannah said…
Coke has been greenwashed.

StephLove said…
What is it? A lower calorie coke or just a smaller serving? Or sweetened with cane sugar instead of HFCS?
November 8, 2016 at 6:51 AM

I literally walked by a display of this the other day at a grocery store I loathe and wherein I refuse to shop.
(I'll spare you the boring details. Suffice it to say my husband is a ridiculous human being.) and said out loud (probably a bit more obnoxiously than was intended) "ALL sugar comes from sugar cane!" and rolled my eyes and furiously headed to the stOOpid cash register in the stOOpid store where the (obviously) book hating, non-reading, cashier person proceeded to toss an Archie Double Digest (for my daughter who had had a truly sh*tty day) onto the conveyor belt with the binding on the wrong side so the pages got chewed up a bit and OMG I AM NEVER SETTING FOOT IN THAT STORE AGAIN! GAH!