November 14, 2016
I know I promised I would be less lame today, but it's possible that I lied. I can't seem to form a coherent string of thoughts.

I did some mending that I'd been putting off. It always takes me so long to get to, and then it's so easy and satisfying to pull the edges together and sew them up and cut the thread and have a whole thing that was previously in pieces. If only fixing everything was that easy.

Angus and I were watching The Walking Dead together until this season. When I was in Boston with Matt for our twentieth anniversary trip I realized I was missing the season premiere and texted Angus to tell him he could watch it without me if he wanted to, but he didn't. Then Matt and I went to Quincy Market the next day and there was a group of hip-hop dancers out front, and JUST BEFORE we left, one of the dancers said "move closer, folks, we're not the walking dead. Oh, Glenn!" JESUS CHRIST, hip-hop guy, it's only MONDAY!

And once I got home, I realized I didn't want to watch anymore. Not right now. I know it's a show about terrible things, and I should be prepared for more terrible things, but I am not mentally prepared for that particular terrible thing to unfold cinematically in front of me at this particular time in my life. In my mind, Glenn is still alive. I did sort of the same thing when I watched Cold Mountain. I had read the book, and felt cruelly mistreated by the heartbreaking real ending that followed the fake ending; so with the movie, I watched until the fake ending, then turned it off and they all lived happily ever after.

I'm watching The Good Place instead. I love Kristen Bell when she plays against type.

I just freecycled a massive pile of Rainbow Magic books. I had to split them into three lots and yank my hands back before they got chewed off. Thank GOD I'm out of the "Whoever the Whatever Fairy" book years. Eve is currently reading Miss Peregrine's Home for Peculiar Children (we did see the movie, which was visually cool and started well, but the end was kind of a hot mess), and then she's going to start on the Colours of Madeleine trilogy, which makes me so happy I actually kind of wiggle when thinking about it.

Also, she drew this in her journal today: 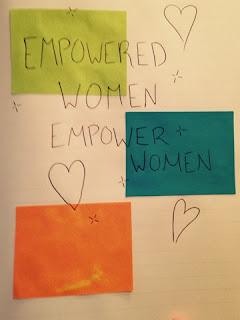 Julie Leclair said…
I had the same thoughts about Miss Peregrine. It had been a while since I read the book and I looked at Heather at the end and said "they went off script, right?"
November 15, 2016 at 5:07 AM

Lynn said…
Totally agree about The Walking Dead. It's such a good show in that it's powerful, and thought-provoking, and the characters are fantastic. But I find now - maybe it's the coming of winter, maybe it's the recent election - I only want to watch happy things, cheerful things. I also gave up Orange is the New Black - we were about halfway through this latest season - and Stranger Things after two episodes because I don't want to see kids in danger right now. Instead I started watching Community and Friends on Netflix. Happy happy!

Nicole said…
I cannot remember either ending from Cold Mountain, the only thing I remember was when the soldiers (can't remember which side. Union? Confederate? Probably Union.) put the baby on the freezing cold ground while the woman of the house screamed. I seem to have blocked out most of the movie. What was the ending(s)?
November 15, 2016 at 9:39 AM

Peady @ Tempered with Kindness said…
This is so *not* lame!

I love what your daughter put in her journal. <3 That is encouraging.

I need duckies and bunnies on demand.

Maggie said…
Yeah since Tuesday I've been able to stomach only comedies. I burned through Black-ish and The Good Place. Now at a loss, I'm finally making serious headway on the stack of to-be-read books on my nightstand. Nothing heavy, depressing, or awful need apply for my attention.
November 15, 2016 at 2:17 PM

StephLove said…
I've been wanting to see Miss Peregrine because Noah and i enjoyed the books. Too bad about the end.
November 16, 2016 at 4:20 AM

StephLove said…
p.s. Those Rainbow Fairy books were the worst, but they got J reading independently because I wouldn't read them to her.
November 16, 2016 at 4:23 AM