November 01, 2016
Me every year trying to decide on a costume for our friends' Halloween party: "I hate dressing up. I'll just try to find something that won't be too hot."

Me every year when I put on the costume for the party: "I look like a stripper."

Eve most years when I put on the costume for the party: "Nah, you're fine, let's just go."

At least it wasn't too hot.

For years, Matt would let the kids draw the design they wanted for their pumpkin and then he'd carve it. When they got a little older, they'd clean out and carve their own. Now Angus has no interest, but Matt usually helps Eve clean them out and then she carves at least one.

This year Matt and Angus were away at a baseball showcase until late the night before Halloween, so Eve carved both pumpkins (we always get an Ernie and a Bert, for some reason), but I felt like I should help her clean them out. I really hate touching raw pumpkin. 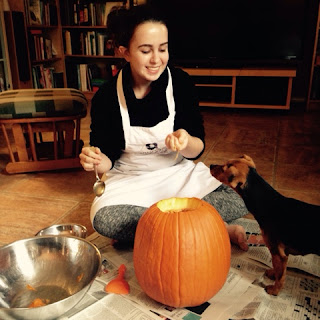 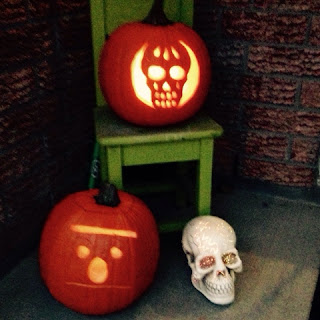 My iron is low again. Every now and then when that happens, I start to experience a moderately severe form of pica wherein anything powdery or dusty suddenly seems appetizing. This happened when I was pregnant with Eve and our basement was being finished, and I had to limit my time downstairs because the drywall dust was suddenly extremely appealing. I had less access to Google back then and thought I was just losing my mind in a pregnancy-related kind of way - it was only afterward that I learned that it was indicative of severe anemia. Apparently there are people who eat a handful or two of baby powder a day on the regular, which makes me feel simultaneously less alone and just bewildered about the state of humanity. I recently read a short story about a pregnant woman experiencing pica which is tied up with her deteriorating relationship with her partner. It ends with her eating a mixed handful of gardening soil and powdered dish detergent which, I'm not going to lie, sounded like a totally palatable combination. I'm taking supplements. And trying really hard to keep my Lush dry shampoo directed solely at my hair.

I blogged three times in September and once in October, and it's NaBloPoMo. Gulp.

Good luck getting your iron back up. That can really run you down. Are you taking vitamin C with it? That can help you absorb it.
November 2, 2016 at 6:09 AM

Nicole said…
I've heard of pika before - for some reason I didn't know it was associated with iron. How did I not know that? Seems obvious now.

Your costume was awesome, you looked great!

Common Household Mom said…
I love your costumes and your pumpkins!
November 3, 2016 at 7:02 PM