1) Playing Exploding Kittens, "a game for people who are into kittens and explosions and laser beams and sometimes goats". It's kind of like Russian Roulette, with extremely rude cartoons and less having to mop up blood and brains afterwards (unless Collette doesn't take losing well, which she often doesn't. 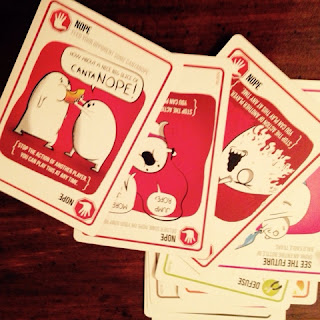 3) Collette getting so pissed off at Cynthia not being able to figure out her masterful drawing of a finger puppet in Pictionary that she barked "Allison! What is this?", and held it up, and I said "a finger puppet" and got the point even though I wasn't on her team. Then Collette feeling bad and trying to suck up to Cynthia for the rest of the game.

4) Cynthia more than making up for the sucky guessing by drawing an airplane, then a perfect bunch of grapes, then the French flag, so Collette was saying "The Concorde" while the rest of us were all still going "uh, airplane? Fast? Air flow?"

5) Me, drawing something for fly and Susanne saying "butterfly" before someone on another team guessed first, and me sobbing that I'm a terrible draw-er, and Susanne saying consolingly "that's a perfectly good butterfly!" and me saying "But I was trying to draw an airplane!"

6) Me drawing this card in Exploding Kittens and laughing until I cried happy drunken tears at the sheer twisted brilliance: 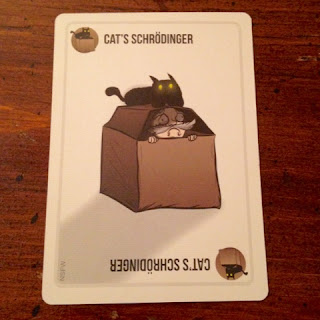