April 20, 2016
So Sunday was Blogging Out Loud Ottawa at the Writers Festival, probably the last one ever. I'm kind of sad that there's no chance Lynn will be emailing me to say "I'm so sorry, but you have to read at BOLO again" next year. I wore my new Docs because I wore my old Docs the very first time I read, and it seemed like a full-circle kind of thing. I had brunch with a group of people so fabulous that I kept pinching myself and everybody else just to confirm that I wasn't dreaming, until everyone said stop pinching me or I will pelt you with Tater Tots. 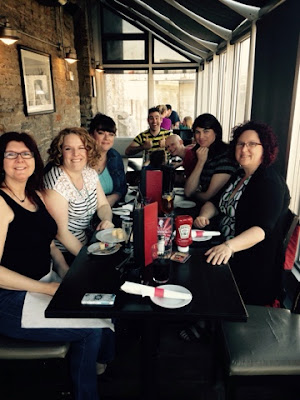 And here's a really bad photo of my cute dress. 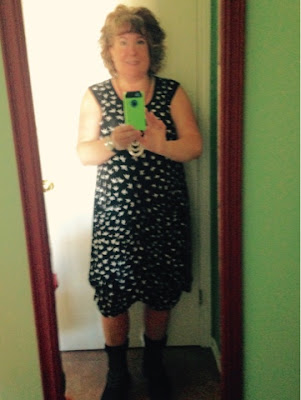 I got to the venue and saw even more fabulous people and I thought I might actually be in heaven, except a few key people were missing. Also, in the one picture of me reading I look as big as a house (not inaccurate, but sobering). But I kind of like this picture of me laughing at Joe Boughner's hilariousness.


And the pictures of me smiling so hard I can't keep my eyes open because I'm standing next to someone delicious. 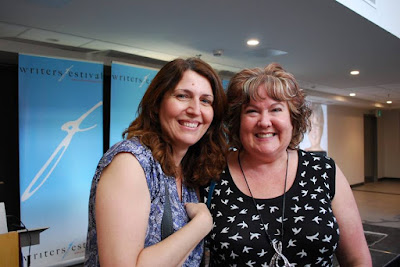 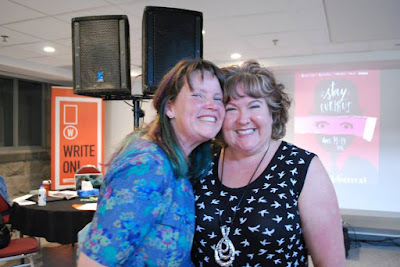 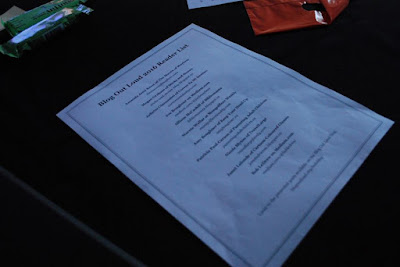 I read fifth. I didn't print my post out in a big enough font, and it was a little dark at the podium, so I was kind of straining to read, and people laughed at the right parts but the funny parts seemed really far apart, so the whole thing felt very long. I was too nervous to even notice if everyone clapped after, but they probably did. As usual, the other posts were amazing and being included in that lineup felt like it required more pinching (I looked like someone had used me for a dart board the next day).

I came home exhausted and elated. Angus asked me to help me edit his rant for English. I usually don't do too much to edit him because I want it to be his work, so I just point out the most obvious mistakes. But his previous English teacher who he liked was off on mat leave, and the new teacher seems to be a much harder marker, so he wanted me to really be stringent on grammar. I reworked it with him until it seemed beyond reproach to me and then I said "now if she marks it badly we'll know she just doesn't like jocks". And then I started laughing and he asked me why I was laughing, and I said I had just remembered this guy I knew in University who was extremely smart and well-read and a tiny bit stuffy. He had a huge crush on this black-haired girl named Sophie with a Russian last name - she was tiny and beautiful but not very smart or well-read, and he was furious that she had gotten a bad mark on an English essay, and I asked him why, because Sophie getting a bad mark on an English paper didn't seem like a big shock to me, and he said "because I WROTE the damned thing!" (Actually he probably said 'blasted thing' or 'cursed thing' - he really was kind of pretentious). Which is not a great argument for the professor, as it turns out.

Then I went to work on Monday and spent long delirious moments in the supply room trying to decide between saffron, salmon and goldenrod paper for my Book Fair memo. I lifted the papers warm from the photocopier and giggled as I thought of the phrase "hot off the presses". I hurt my shoulder using the paper cutter to slice them all into thirds. I risked repetitive strain injury stapling three hundred memos to three hundred flyers (and that's only half of them). And I thought again about how happy I am there, and how stupid it is that it took me as long as it did to realize I belong in a library job. And how lucky I am that I spend a good part of my life now surrounded by wonderful people, and words.
blog friends BOLO 2016 confessions of an indiscriminate reader happy days librarying

Alison said…
It sounds like you had a marvelous time. I'm so happy for you!

StephLove said…
Sounds like everything's coming up roses. I'm glad you had a good time at BOLO and that the library job is working out for you.

Lynn said…
You were fabulous, as always! I actually DID notice your shoes and how cool they were. They made me want to run out and get some docs and a cute sundress ASAP. :)
April 21, 2016 at 6:22 AM

Moosilaneous said…
Congratulations on so many counts - your reading, your job, your editing.
Yay you!