April 12, 2016
So we're in Mexico over March Break. We could just laze around by the pool, do a little snorkeling, eat, drink, laugh, and call it done.

Instead, a small cohort among us, notably including my husband, signs us up for a day-long excursion that will include, in aforesaid husband's words "a bunch of cool stuff". Okay. Sure. Fine. So we drag ourselves out of bed at stupid o'clock on our second full day there and walk up to the lobby to get on a bus where a very personable young man named Javier details our activities for the day, which sound pretty cool, except...

"Okay, his English is really good but he does have a bit of an accent... he didn't say rappelling, did he? Surely you would have told me if there was rappelling involved. Why are you looking at me like that? IS THERE RAPPELLING IN MY NEAR FUTURE?" 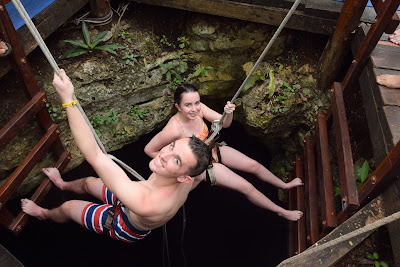 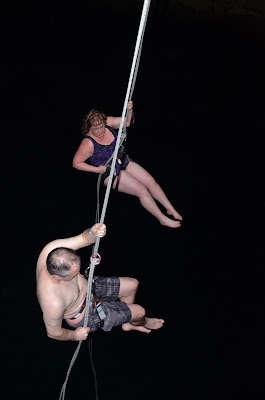 Down, down, down into the deep dark. 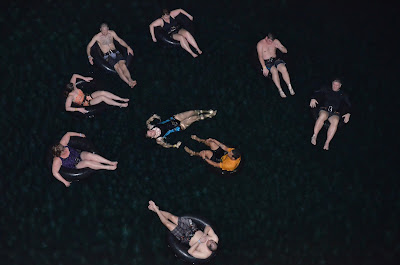 Also, ziplining! I remember distinctly once saying I would never go ziplining in another country because who knows if their safety standards are as rigorous as ours.
Well, I sent my kids across and they were okay, so... 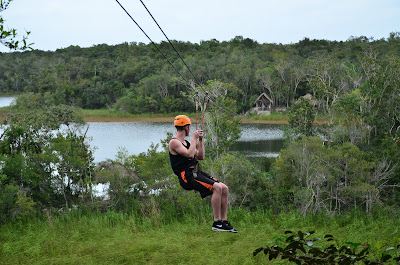 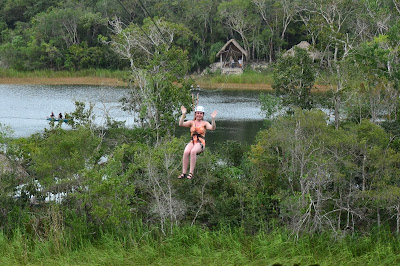 Besides this, there was some jungle walking and a tour of some Mayan ruins. It was kind of cool - the tour company we were with partners with Mayan communities, building them infrastructure in return for being able to bring people in a few days a week. They made us an amazing lunch. Of course, in order to get from the last ziplining place to the lunch (which wasn't until about eight hours after breakfast because our schedule got changed halfway through the day_, there was this cool thing we could try called....
canoeing.
"We're Canadian" we said. The other tour group meandered all over the lake, while we formed a line of canoes that backed up, powered across in a straight line and docked perfectly. 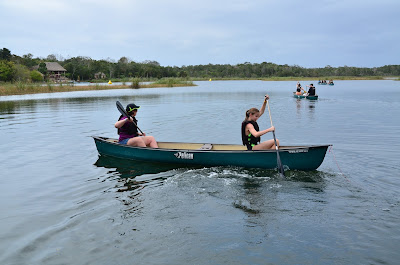 I was proud of Eve (and me) for doing the scary stuff with a minimum of hyperventilating. I was probably proudest, though of when we had the option to climb the very high, many-staired, no-railing Mayan tomb. 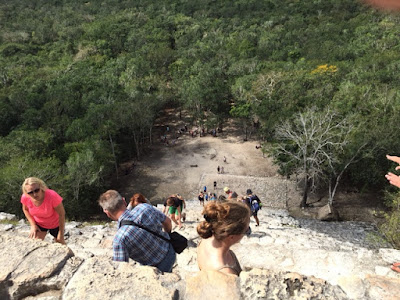 I got to the top by not looking down. Then I turned around and looked down and thought "I might have to live here now". We speculated that the whole reincarnation thing might have sprung from a desire to slit your throat at the top and come back to life at the bottom. 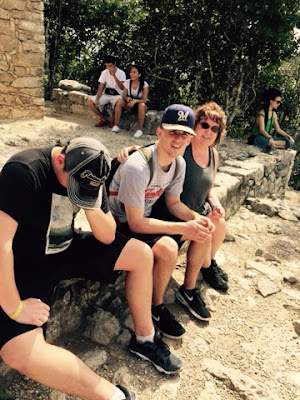 Eve, for her part, went up about four steps and then said "nope". She wasn't upset that other people were going, she wasn't conflicted about missing out, she just said that she would wait for us at the bottom. Another couple of people ended up not going too, so she wasn't alone. If that had been me at that age, I would have been beside myself trying to decide what to do - too scared to go up, too upset to stay behind, too overwrought to express any of this clearly.

She was totally cool. 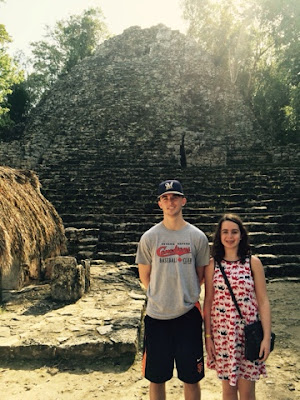 It was a cool, exhausting, terrifying, satisfying day. The rest of the week we lazed by the pool, did some snorkeling (actually that was kind of scary too, but that's another story), ate, drank and laughed. No rappelling involved. Although Dave did almost get us beat up by some Russians one night.

Alison said…
Way to be brave, Allison and Eve!

This line is my favorite: "It was kind of cool, once I got through "I'm going to kill my husband" and all the way past "I'm going to die"." Maybe because I've had that exact line of thought before. I also enjoyed the idea of using one's children as guinea pigs.
April 12, 2016 at 5:10 PM

StephLove said…
I'd been hoping you'd blog about this. Good for you for trying new things and good for Eve for knowing her limits.
April 13, 2016 at 4:15 AM

Nicole said…
That looks awesome. We are hoping to go to Mexico next year so if you have time to send me the resort you were at, that would be great. Looks like a lot of fun. Generally I like to be lazy on vacation, but sometimes a scary adventure is what I need! Then I can be lazy and drink margaritas the rest of the time! xo
April 13, 2016 at 10:48 AM

Anonymous said…
This is really cool. I have the same question about the rappelling. How *did* you get back up?

I needed to read this. There are so many obscure reasons for me to be in better shape. I *could* go to Mexico one day and I would be so sad if I couldn't do all the things.