November 02, 2015
I've been feeling frustrated with myself thinking that I've always kind of hated Halloween and now that Angus doesn't trick or treat anymore and Eve probably just did for the last time I should have appreciated it more. Then I realized that wasn't really accurate. I loved taking them when they were little. I just didn't like it when they got a little older and we knew they were going to go but it always took up until the last minute to plan who we were going to go with and I'm just bad at not having a plan, and at wandering around the neighbourhood awkwardly without a parent friend while my kid asks strangers for candy.

For a couple of years when Angus was going with friends, I made Matt take Eve with whoever she went with. Last year I sucked it up and we went with the crazy Greek friends to an elaborately decorated neighbourhood in Riverside South and it was really fun. This year Eve decided to go with two friends she's known since birth, and Collette and I sat and drank rum and cokes while they went around the neighbourhood together, without us, and that was pretty fun too.

I still kind of miss this: 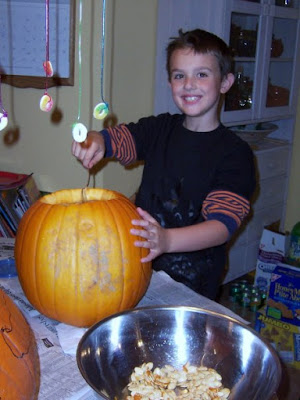 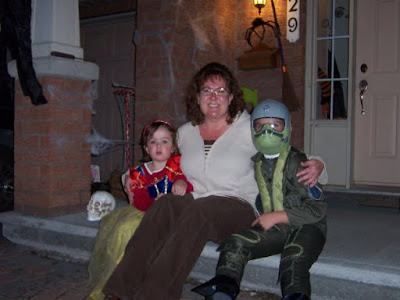 But on Saturday, I baked pumpkin scones while Eve carved the pumpkins. 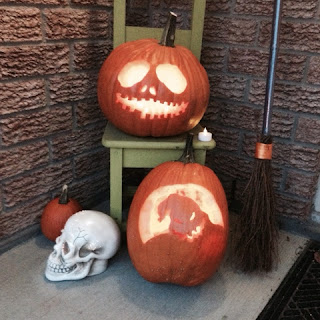 And Angus went for dinner with some friends. To the place where I drink beer every Tuesday night with MY friends (eep).
But he still dressed up for the Halloween party. 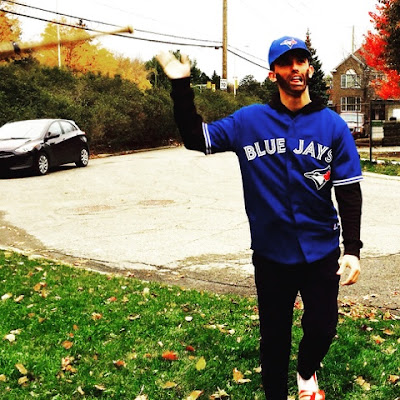 With so much of parenting, when you lose something you almost always get something equally (but differently) awesome in return. 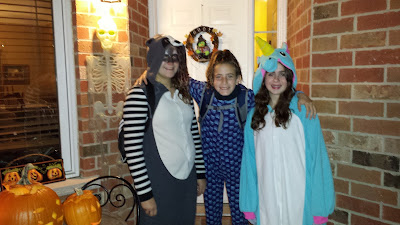 (Like your friend getting put in a chokehold by her kid when she goes in for an unsanctioned Tootsie-Pop grab).

Lynn said…
"With so much of parenting, when you lose something you almost always get something equally (but differently) awesome in return."

This was like, a REVELATION to me. Of course! Yes! You are wise, oh Allison-san.

Nicole said…
I'm with Lynn - that is so true, and very insightful. It's easy to forget the crappy parts (exhaustion at going around the neighbourhood) and just remember the cute parts, but you are exactly right: even when something changes, there is something better along the way. Thanks for this post, it's exactly what I needed! xoxo
November 2, 2015 at 12:57 PM

Swistle said…
I like this a lot: "With so much of parenting, when you lose something you almost always get something equally (but differently) awesome in return." I've been feeling that way about a lot of things lately.
November 2, 2015 at 1:03 PM

Hannah said…
Like everyone else, "With so much of parenting, when you lose something you almost always get something equally (but differently) awesome in return" really struck me. It's so true. Wise friend indeed.

Alison said…
Thank you. Especially since I'm in the awkward trying-to-make-a-plan stage. My friend and I finally figured it out and had fun walking around with the boys while our daughters went around the neighborhood on their own.
November 2, 2015 at 4:57 PM

Sasha said…
Ok, I'm not going to bother trying to be original this time, and even though it's been said it bears saying again: this is brilliant:

"With so much of parenting, when you lose something you almost always get something equally (but differently) awesome in return."

And maybe from now on I'll just not read other comments until I'm done mine, so I can pretend to be original ;)

StephLove said…
It is kind of strange not to be going t-o-ting with the kids (2nd year in a row now they've gone either with friends or each other) but I'm getting used to it. I've been wondering how long N will do it. He's at the age when a lot of kids stop but he loves making his costumes and there's no downside to getting free candy as he sees it, so maybe he'll never stop.
November 3, 2015 at 4:43 AM

Maria said…
I used to love Halloween when my daughter was younger. I had a black Victorian mourning gown that I loved to put on every year when I took her all around our neighborhood. And then she grew up, my daughter, and it seemed plain silly to put on that mourning gown, so it has been sitting at the back of my closet for the past three years. I can't even hand it down to my daughter because I am barely five feet tall and she is 5'11.

This year, she and her friends decorated pumpkins and roasted pumpkin seeds for me while I lounged on the sofa.

Nothing stays the same... we blink and it's changing again... or gone.

We weren't sure this year we would have two Things trick or treating, but in the end we did. I was so happy and we all had a great night.

I was so thankful that we had another fun holiday under our collective belt. I know these days are fleeting. I plan on cherishing every last one of them.